The Israeli army publishes a heavily edited video of a detained Palestinian man from Gaza being interrogated about Hamas tactics. The army won’t answer any questions about it. 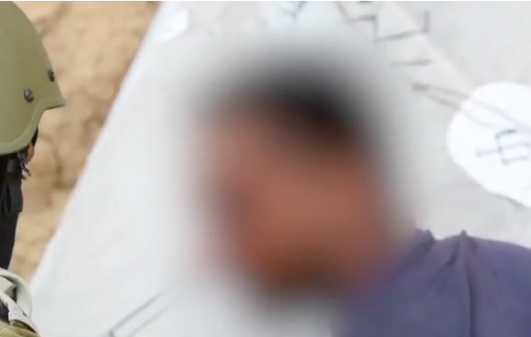 A still frame from the IDF Spokesperson’s video.

The Israeli army often claims that video clips published by B’Tselem and other human rights organizations in the occupied territories are mendaciously edited, and that they do not show the whole picture. It turns out, however, that it is the IDF’s spokesperson which uses manipulative video editing techniques and refuses to release original, raw video footage.

Last week, the IDF Spokesperson released a one-minute video of an interrogation of a Palestinian man from Gaza who was caught near the Gaza-Israel separation barrier during protests on Nakba Day. Several Israeli news outlets broadcasted the clip, which shows a Palestinian detainee, whose face is blurred, and a kite painted with swastikas placed directly behind him.

The detainee appears to be speaking to a soldier who is questioning him. The soldier’s questions are inaudible. The detainee is shown speaking in Arabic about the situation in Gaza, and describing how Hamas uses women and children in demonstrations he says are aimed at silencing protests against the organization.

At first glance, this 63-second video seems like precisely the kind of evidence the army needs to incriminate Hamas. But at second glance, it’s clear that the video was cut and spliced no less than eight times — almost every eight seconds on average — in a way that the detainee isn’t allowed to even complete a full sentence. It is impossible to know whether, or where, his quotes were taken out of context or have been distorted.

Is an IDF soldier even permitted to film a detainee moments after their capture? Is the Spokesperson’s Unit allowed to release such footage? The army spokesperson refused to comment on whether the detainee gave his consent to the filming and publication of the video.

“Any soldier or policeman who speaks with a detainee suspected of committing an crime is carrying out an interrogation in every respect, and the penalty for publishing an interrogation without the court’s approval is a year in prison under Israeli law,” explained Michael Sfard, an Israeli human rights attorney. “It was intended to frustrate the work of journalists but it also applies to the state.”

In this specific case, it is impossible to identify the detainee because his face was fully blurred, so “a lot of the harm was avoided,” Sfard added.

“International law states that enemy citizens must be protected ‘against insults and public curiosity’,” continued Sfard. “Publishing a video like that of a person speaking against his country and his people is a classic example of this. This is what creates the humiliation effect”.

“We are all familiar with the despicable Gilad Schalit videos published by Hamas or by the North Korean authorities of Americans who were imprisoned there,” Sfard concluded. “It is despicable.”

In a statement issued by the Israeli army, as well as in the Hebrew-language captions the IDF put on the video, the Palestinian detainee is referred to as a “terrorist”. In the English version of the video, embedded above, the IDF refers to him simply as a “rioter.”

The army spokesperson refused to say whether the detainee was armed when he was captured or if he showed any intent to commit a violent act. The army refused to answer whether the man, who it described as “trying to infiltrate Israeli territory,” was captured on the Israeli side or on the Gaza side of the separation fence, or, perhaps, while trying to climb the fence.

The army refused to answer where the kite decorated with swastikas came from, and whether it was at all connected to the suspect or if the army just put it behind him as a backdrop for dramatic effect.

The army also refused to answer whether the man depicted in the video was released back to Gaza or brought before an Israeli military judge and imprisoned.

Translated by Yoni Molad for the Middle East News Service edited by Sol Salbe, Melbourne Australia. A version of this article first appeared in Hebrew at Local Call. Read it here.