Settler violence on the Sabbath is not uncommon in the West Bank: Israeli civilians feel emboldened to attack Palestinians, knowing that law enforcement will refrain from taking serious action until the following week.

They came riding on a horse, two Israeli civilians armed with firearms. One of them jumped off, drew a box cutter, and informed the Palestinian shepherd, B., that “this is our land.” As if to prove the point, he added that he would kill the sheep as well. The two Israelis began throwing stones at the animals, killing one of them with a direct hit to the head. The herd began running away in panic, and B. saw two of them falling down, their legs broken. One of the attackers began hitting sheep in the eyes with a stick.

The place: Khirbet Tel Al Hime, Tubas Region, Jordan Valley. The date: February 17, 2017. Khirbet Tel Al Hime is a small enclosure located some 250 meters west of Road 90, the major north-to-south highway in Israel-Palestine that runs through the West Bank. Around 30 people, all of them from the Ayoub family, live there, and have been living there since 1962.

Until the last few months, say the residents, they had few problems, and none with settlers — though the army did demolish some of their tents from time to time. They shepherded their flock and made cheese from the milk, selling it in the nearby town of Tubas. There is no infrastructure in place, and even the water has to be delivered in tanks from another town. But, all in all, the residents say it wasn’t bad.

All this changed in September 2016. The army raided the enclosure and demolished it. Almost at the same time, a new Israeli outpost was built nearby. Experience tells us that outposts built “accidentally” and without coordination with the Israeli authorities do not survive. So far, this new outpost is still standing.

One suspects we see the old method, the one described in Yesh Din’s The Road to Dispossession report, in action: first, the army allows Israelis to take over land, then turns a blind eye when they use ideological violence against Palestinians, all of which is part of an attempt to push them into despair so they’ll leave. 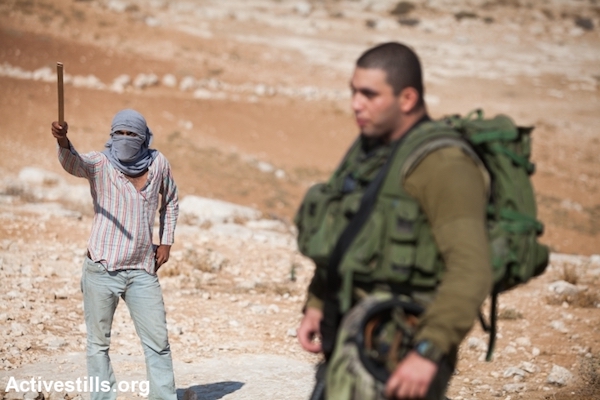 The residents report that between September 2016 and February 2017 they were attacked no less than 30 times, almost always by armed Israeli civilians. In some cases Israeli civilians captured some of them, releasing them only after a large number of village residents arrived on the scene.

Back to the day of February 17. The Israeli civilians, as described by B., “weren’t boys”: they were about 30 years old, wearing small yarmulkes, and one of them had a black beard and hair. After attacking the sheep, the two of them went in the direction of the outpost. B. returned to Khirbet Tel Al Hime, rather scared. The residents called the Palestinian District Coordinating Office (DCO) in Tubas, and at one point officials from the Israeli DCO arrived.

One of the DCO officials, who spoke Arabic, accompanied the Palestinians to the scene of the attack, where he told them that since the Sabbath already began (according to Jewish law, it begins on Friday evening), he would return on Sunday.

This isn’t the first time we hear about the Sabbath becoming a preferred time for rioting on the part of the settlers. On the Sabbath itself, the Palestinians went back to herding, and fortunately for them they had with them something more deterring than the legal authorities: Ta’ayush activists, armed with something much scarier to the goons than a badge — a camera.

The Israeli civilians tried to drive the Palestinians away, but the Ta’ayush activists faced them down. This time it ended with “only” threats: “If you come to the grazing land tomorrow, I’ll shoot you and your flock.”

B. decided not to press charges. He saw, after all, just how effective they are even when he was pointing out the people who attacked him.

Get Our Weekly Newsletter
Before you go…
A lot of work goes into creating articles like the one you just read. +972 Magazine is nonprofit journalism, owned by many of our writers, editors, and journalists. In order to safeguard that independent voice, we are proud to count you, our readers, as our most important supporters. With your support, we can keep +972 Magazine a strong, independent, and sustainable force helping push the global discourse on Israel/Palestine.
DONATE
More About Shabbat 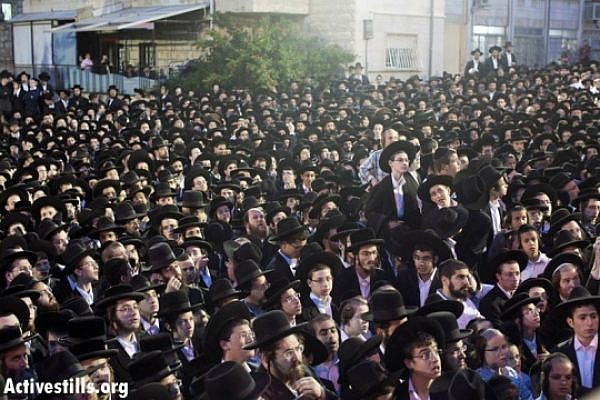 Is ‘predatory theocracy’ actually threatening Tel Aviv?
A recent Supreme Court ruling dictated that Tel Aviv must shut down certain business during the Sabbath. The decision was met by an automatic response that framed the decision as a ruling in favor of a ‘predatory theocracy,’ instead of one in support of an ‘enlightened, free, and open’ society. But are these the only two options…
By Haokets August 3, 2013 Sabbath in sin city: Keep the shops open
A Supreme Court ruling dictates that Tel Aviv must shut down its chain stores on the Sabbath. But it is in this city that freedom of religion means living one’s religious feeling as they choose and experiencing the diversity of how others interpret their spiritual lives.  I have a love-hate relationship with the 24-hour convenience store AM/PM…
By Dahlia Scheindlin June 27, 2013 In Hebron, no arrests (of Jews) on Saturdays
A Palestinian is attacked by a famous settler. Police detain the Palestinian, but not the settler – because it’s already Shabbat. By Yesh Din, written by Yossi Gurvitz At the beginning of February, “I.”, a resident of Tel Rumeida, was sitting in his yard with some friends. This was a Friday, twilight was setting in,…
By +972 Magazine April 10, 2013