Firing live ammunition at civilians is a crime, more so when minors are involved. Such an incident should not end with a disciplinary procedure but with a criminal investigation. That is not what happened. 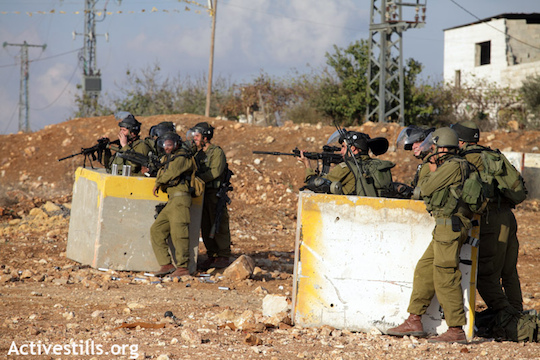 At the end of last July, J., a boy from the village of Silwad, set out with his brother and two other boys to visit family friends in the western side of Silwad, a distance of about one kilometer from his house. One of the boys was asked to deliver a bundle of clothes to the family. They reached the house, handed the bundle over and headed back. On their way, they met a friend shepherding his flock and sat down next to him. And then J.’s world turned upside down.

He noticed three soldiers coming out of the trees behind them, blocking the path they had intended to take home. Soldiers on the village roads are not a common sight, so the group changed its course, and started climbing the nearby mountain.

As they reached a bend in the path, they heard gunshots. The group scattered instantly. J. himself says he went into shock, since this was the first time he had heard gunshots so close to him. He was slower than the others. He heard a second volley and then felt a hit in his right arm; a third volley came and a bullet hit him in the neck. J. managed to walk a few more steps and then collapsed by the wall of a house. He was evacuated to a hospital in Ramallah where it was determined that the bullet entered the right side of his neck and existed through the left. He was hospitalized there for four days. 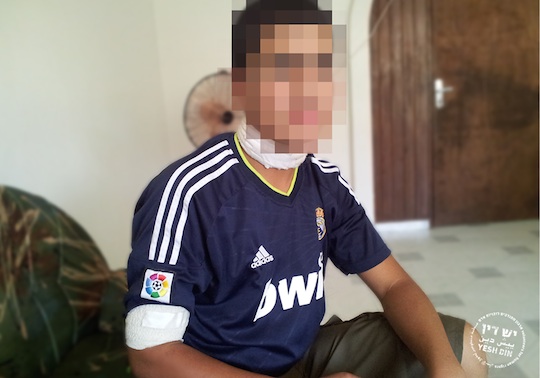 J., a 14-year-old Palestinian boy who was shot through his neck and arm. (Photo courtesy of Yesh Din)

Yesh Din wrote to the IDF demanding an investigation into the incident. Four months later, the IDF sent an answer that can only be described as infuriating. The debriefing of the incident, wrote the Prosecution for Operational Affairs, showed that on the same date there were clashes between IDF forces entering the village and residents, who allegedly threw stones at the troops. The Military Advocate General reached the conclusion that the shooting took place in accordance with the rules of engagement, “with the exception of a minor deviation at the end of the incident.” Nowadays, that is how the IDF refers to the shooting of a live bullet into the neck of a 14-year-old boy. Accordingly, Yesh Din was informed that disciplinary measures were taken against the commander of that force. Not that we were informed of the results of the disciplinary measures.

Um, no, no. Firing live ammunition, even at protesters, is not in accordance with the orders, unless the soldiers’ lives are in danger. The IDF doesn’t even try to claim that J. and his friends were threatening the lives of its troops. Also, this wasn’t one shooting: J. counted three separate volleys. Furthermore, from the description given by the IDF, it seems J. and his friends weren’t even in the area where the IDF soldiers were attacked, assuming they were indeed attacked.

The firing of live ammunition at uninvolved civilians is a crime, more so when minors are involved. Such an incident should not end with a disciplinary procedure but with a criminal investigation. Accordingly, Yesh Din attorney Emily Schaeffer appealed and demanded the opening of an MPCID (Military Police Criminal Investigations Division) investigation ASAP. Recently, Yesh Din learned that the appeal was rejected. The prosecution is of the opinion that though the shooting after the first volley – as J. and his friends fled – was improper, given that the officer in question was dealt with in a disciplinary procedure and was even fined, the very existence of the disciplinary procedure exhausts the need for a criminal investigation. We’re uncertain whether the sum of the fine was 10 cents, as per the infamous fine of the colonel responsible for the Kafr Qassem massacre – and we don’t know because the prosecution didn’t mention the sum.

But even if the fine was serious and not a joke – though if it was serious, why didn’t the prosecution note the sum? – we cannot accept a disciplinary procedure as a replacement for criminal law. After all, if the bullet that hit J. had deviated from its course by just a few millimeters,and the boy had joined the long rank of minors killed by the IDF, a criminal investigation would obviously have been opened. How can putting a bullet in the neck of a person, who was admittedly uninvolved, end with a disciplinary procedure and a fine?

During the Vietnam War, a common phrase among American soldiers was the “Mere Gook Rule,” meaning that whatever you may do to the foreign population, nothing will happen to you. These aren’t humans, these are merely Vietnamese. When the IDF subscribes to the notion that shooting a 14-year-old boy in the neck is just “a minor deviation [from the rules of engagement] at the end of the incident,” it sends that same message to its troops: these are mere Palestinians. Do with them as you will. Nothing will happen to you. At worst, you’ll face a disciplinary procedure.

And when that’s the message conveyed by the military prosecution to its ground troops, the prosecution itself becomes an accomplice to the crime.

Related:
Four bullets to the back of the head
Near impunity for IDF soldiers who kill Palestinians