Did the revolution lose its sex appeal? Did the J14 leaders enable politicians to ignore them? Whatever the reason, it is clear that the main benefactor of this state of affairs is Prime Minister Netanyahu. 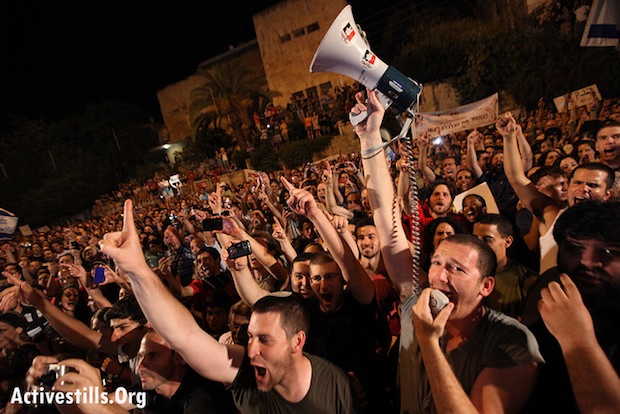 With the elections just two weeks away, it has become apparent that the 2013 elections are no different than the ones held in Israel since the late 1980s. Once again, the debate revolves around a flailing peace process, a possible solution to the Palestinian-Israeli conflict and the security challenges facing the State of Israel. The line between the Israeli left and right wing has remained in place.

Following the advice of the BBC’s fictitious Basil Fawlty, owner of Fawlty Towers, who cautioned “don’t mention the war,” most political parties have ignored or marginalized issues that were dominant during the social justice protests that swept through Israel during the summer of 2011. These included issues such as the high cost of living and the increasing financial burden placed on the shoulders of the Israeli working middle class.

Thus far, the impact of the social justice protests has been limited to the Labor Party, which placed both Stav Shaffir and Itzik Shmuli, two of the protest’s leaders, in prominent positions within the party’s list of candidates for the Knesset.

However, while these two figures attracted much media attention following Labor’s primaries, they have now all but vanished. While veteran party members such as Yitzhak Herzog are routinely sent to the television studios, Shaffir and Shmuli have been confined to Labor’s Facebook page. Even Shelly Yachimovich, leader of the Labor Party, has changed her tune and abandoned social issues which were prominent in the party’s campaign. Her statements are currently limited to reiterating the fact that she sees herself as a candidate for the premiership and that Netanyahu can be defeated.

It would seem that the social justice movement that so many Israelis demonstrated in favor of has lost its political sex appeal. In other words, the revolution has been trivialized. The question is why?

It’s possible that the fault lies in the social justice movement and its leaders. While these called for a reallocation of national funds and a change in national priorities, they were careful not mention what priorities would be abandoned or how the national budget would be redistributed.

Out of fear of losing their widespread support amongst Israelis from both sides of the political spectrum, the leaders of the movement refrained from explaining that the funds would have to come from the settlements whose infrastructure and security represents a substantial portion of Israel’s budget. The fact that creating a new welfare state would also mean the end of the occupation of the West Bank was “an inconvenient truth.” By labeling the protests “nonpolitical,” they enabled politicians to ignore them.

Another possible answer is that Israelis are still more supportive of the occupation than of a welfare state that would actually be of long-term benefit to them. How else can one explain the surge in popularity of the right-wing Jewish Home party headed by Naftali Bennett? Recent opinion polls have shown that Bennett appeals to both the national-religious movement as well as young secular Israelis – the same ones who were at the forefront of the Social Justice protests. This is remarkable when taking into account that the party’s campaign centers mainly on the possible annexation of the West Bank and the future of the territories.

Lastly, it is also possible that 2011’s protests were more of a perfect storm than a genuine shift in the priorities of the Israeli middle class. The protests in Tel Aviv erupted soon after the mass demonstrations in Cairo’s Tahrir square. While sitting in front of their televisions, Israelis to felt an urge to take to the streets. Then came a succession of strikes by social workers, doctors and teachers that set the scene for the outburst of a much wider national social protest.

Whatever the reason for the disappearance of the social protests from the 2013 elections, it is clear that the main benefactor of this state of affairs is Prime Minister Netanyahu. Labeled as an ally of Israel’s tycoons, Netanyahu has now regained his popularity amongst many Israelis. From a sitting duck to a mighty duck, the Prime Minister seems to be heading for a third term in office. And as Mr. Fawlty tells his dinner guests, “If you don’t like duck…then you’re rather stuck.”

Ilan Manor is working on his MA in mass media at Tel Aviv University. He has previously contributed to the Jerusalem Post, +972 Magazine and The Jewish Daily Forward. His Hebrew-language blog has been featured several times in the Israeli press.