The front page of Israel’s main financial daily, The Marker, pretty much says all you need to know about the capital-government-military relationship in 2012 Israel: 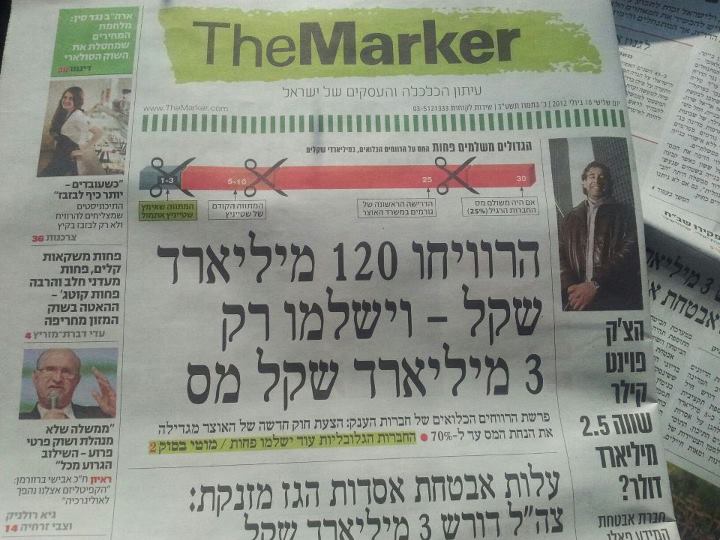 Top headline: “They earned 120 billion – and will only pay  3 billion in taxes. A new proposal from the treasury to the tycoon companies increases tax break to 70 percent.”

The context here is that some of the largest companies operating in Israel have around NIS 120 billion worth of profits “stuck” inside the country: they haven’t registered the profits as dividends, so as not to pay corporate taxes, which would have amounted to about NIS 30 billion. The government is, as always, concerned about hurting their tender feelings and “scaring off investors”, so it’s bending over backwards to let them get away with as much as possible: The treasury originally demanded 25 billion, then the tax authority said 15 billion would be enough, then the finance minister, Yuval Steinitz, went down to 5 billion, and today, climbed down further, to 3 billion (and possibly as laughably little as 1 billion).

Meanwhile, the navy is asking for up to NIS 3 billion (for among other things,  acquiring four new warships) to do what the navy is supposed to do, which is to protect Israeli interests at sea. Only the interests, in this case, are not so much Israeli as Israel’s tycoons, who will be pocketing the vast majority of the profits from the gas fields. The previous estimate for the costs the state will incur in securing the rigs stood at NIS 20 million, and the commander of the navy told The Marker no more than three months ago that all the infrastructure for securing the gas fields was already in place.

In other words: Instead of gathering the actual taxes owed by tycoons – 20 billion or so – Israel agrees to take just 3 billion, and, literally on the same day, is required to pump these 3 billion back to the tycoons in the form of security for their gas rigs. What goes around comes around, and quickly, too.