Why “Breaking the Silence” is Short-Listed for the Sakharov Prize 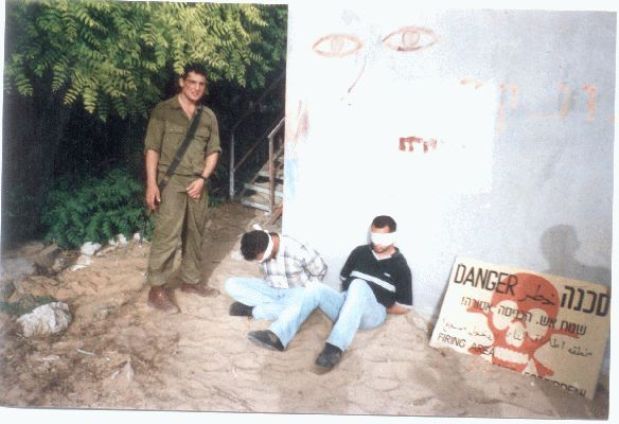 Soldier near a Detained Palestinian, handcuffed and blindfolded near an IDF post (image: Breaking the Silence)

There is a lot of pain and suffering in the world, and there are a lot of human rights violations. The European Parliament’s Sakhorov Prize is “intended to honour exceptional individuals [and groups] who combat intolerance, fanaticism, and oppression. Like Andrei Sakharov himself all the winners of the prize have shown how much courage it takes to defend human rights and freedom of expression.”

To understand why “Breaking the Silence”, an organization of IDF combat veterans, is short-listed for the prize, one only need read the Wall Street Journal’s editorial attack on the group and the Europeans for short-listing them.

The problem is not so much the organization’s work, which makes sweeping accusations against Israeli soldiers….

False. The organization does not make accusations, much less sweeping ones. It collects testimonies from IDF soldiers, both veterans and those on active duty, that report human rights abuses that they witnessed or participated in. Hundreds of testimonies (some in English translation can be read here) have been collected and subjected to a rigorous verification process. To date, not a single question mark or doubt has been raised about any of the testimonies. At the same time, the IDF Spokesperson’s office, which has itself relied on the organization’s testimonies in its investigations, has changed its story time and time again on incidents and policies, e.g., the use of white phosphorus in the Gaza Operation or the bombing of the Gazan mosque during prayers.

The real insult is that an award meant to honor those who fight “intolerance, fanaticism and oppression” is being considered for activists operating in one of the world’s most vibrant democracies.

False. Israel is a democracy for Jews, but it has ruled over a million and a half Palestinians for over forty years without giving them basic human or citizenship rights, during which it has expropriated their land and transferred its own population to the territories, in violation of the Geneva Conventions. And its discrimination against its own Palestinian minority gets worse daily, e. g., the government-supported  Loyalty Oath law.

But the biggest threat Israeli activists face is a sunburn from those long meetings at Tel Aviv cafes.

False. Israeli activists have been seriously wounded by live ammunition at unarmed protests, thrown into jail after protecting Palestinians, and harassed and demonized by the media, the parliament, and the government. Their “sunburn” comes from their joining Palestinians at protests against the Separation Barrier, protecting Palestinian children from settler attacks and helping Palestinians with the olive harvest before their trees are uprooted and their fields put on fire.

Israel is a noisy liberal democracy in which sitting prime ministers are investigated on corruption charges, a Supreme Court rules on behalf of Palestinian petitioners against the Israeli government, and a strong press routinely criticizes the government and military.

False. Israel is a country whose elected officials are increasingly suspected of corruption, whose supreme court’s decisions on behalf of Palestinian petitioners are routinely ignored by the government, and whose press barely questions the government and military version of events, especially with regard to the Israel Defense Forces

Just how democratic is Israel? When “Breaking the Silence” published its Gaza testimonies in the summer of 2009, the group was vilified in the media and by the government, including the Prime Minister. Television interviews previously scheduled with it were abruptly cancelled. The IDF spokesperson’s office refused to appear on television with its leaders. A popular radio host said, “The question is why don’t the strong people among us break their bones and send them home with scars?” The foreign ministry asked the Netherlands to freeze funding for the group. Pending legislation in the Knesset, supported by the government, targets the group, and those like it; if the law passes, the group will have to register as a political organization, will have to fill out reams of forms yearly unlike rightwing NGOs who are exempt from the law, will have to announce at every public forum who its foreign governmental donors are, and if it fails to do so, its leaders will be subject to prison terms and heavy fines.

Why is “Breaking the Silence” short-listed for the Sakharov prize? Because Israel’s decline as a democracy has to be stopped. First, Breaking the Silence was vilified and defended by the New Israel Fund. Then the New Israel Fund was vilified, and all human rights NGOs were threatened with legislation attempting to delegitimize them and to silence them. This is a very slippery slope, as is evidenced by the anti-democratic legislation proposed almost daily, not to mention the main story, which is the ongoing occupation of the Palestinian territory.

Does the Wall Street Journal know about this? Does it care? After all, the human rights movement began as a weapon in the Cold War against the Soviet Union. Activists like Andrei Sakharov and Anatoly Sharansky, were hailed and feted because they were anti-Soviet and an embarrassment to the Soviet Union, and this goes, mutatis mutandis, for the human rights champions favored now by the Wall Street Journal anonymous editorial.

Why is “Breaking the Silence” supported in Europe? Partly because Israel asked Europe to silence the group by denying them funding. Partly because the group has led tours to Hebron for the last several years that have shown visitors to Israel (including European parliament members) the truth about the Occupation, not the propaganda written for the Wall Street Journal by the anonymous (Israeli foreign ministry?) hasbara-nik. And partly because Mr. Lieberman is the Foreign Minister of Israel. But mostly because the purpose of the group is to wake-up Israeli society about what some of their children are doing only miles from their home. It is precisely to reveal the secrets and lies that are the life-blood of a long term occupation army, to hold up a mirror to a society in denial that prefers to look elsewhere.

The Sakharov prize is not only for those who speak out against the world’s tyrannical societies. It is also for those who wish to prevent seriously flawed democracies from becoming tyrannical societies. Short listing “Breaking the Silence” is Europe’s ultimate compliment to Israel. The decision says that it is not too late for Israel to become a “decent society,” to use the term of its best-known philosopher, Avishai Margalit.

Europe can help concerned Israelis break the silence and to stop the human rights hemorrhaging of its society. Israel needs that help now.

Re-posted from The Magnes Zionist.