Yusuf Fahri Mussa Ahleil, aged 16, was shot and killed on January 28, 2011, probably by a settler. The state took 14 months to appoint a prosecutor to the case.

Many of Yesh Din’s posts in this blog deal with the incompetence of Israeli police investigations, and it’s possible that the death of Yusuf Fahri Mussa Ahleil, a 16-year-old boy from Beit Ummar, will be added to that list; but for the time being, it is a story of criminal negligence on behalf of the prosecution.

On January 28, 2011, something happened in the village of Beit Ummar in the Hebron region. Testimonies we collected describe an assault by Israeli civilians from two different directions simultaneously. Both incidents involved shooting; the second one ended in death. Witnesses described a large group of Israeli civilians raiding the village, among whom three fired at the Palestinians using weapons, likely M-16 assault rifles. According to one of the witnesses, the Israelis were conducting some sort of ceremony, blew a shofar, and then opened fire. The witnesses agree that no military troops were present and that they arrived only after the shooting. 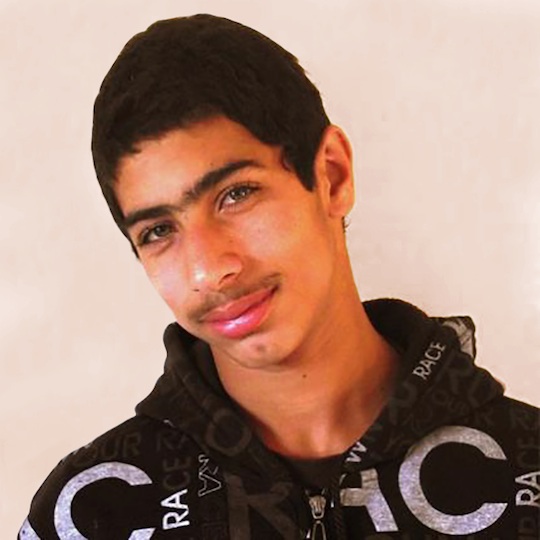 Yusuf Fahri Mussa Ahleil, who was shot in the head at the age of 16 by settlers. (Photo: Courtesy of Yesh Din)

When it was all over, Yusuf Ahleil, who was on his way to help his father with his work in the field, lay dead on the ground. The testimony of the father, Fahri, is worth quoting: “I work in agriculture, and that is my main profession. During their vacations the children help me. Before I went to work [on the morning of the incident] I asked my son Yusuf to come with me to work later during the day. At some point I heard the sound of gunshots; I did not know what it was about and kept on working. And then, I don’t remember the time, some people from the village came with a vehicle and asked to take me home. I did not understand why – I refused but they insisted, took me with them and brought me back home. When we arrived, I saw that most of the village was gathered next to my house. I asked what happened. I was told, your son was shot. I said, how can that be? We agreed that he should join me at work. This is how I learned that my son, while on his way to work with me, had been wounded by the settlers.”

Yusuf was shot in the head, and died.

The family filed a complaint with the police that same day. From that point onwards, our monitoring tells the story. On February 16, 2011, the police informed us that the case was under investigation. On March 14, 2011, it told us it received testimonies and photographs, and asked that we provide any further information we may come across. On May 2, 2011, the police informed us that the case had been transferred to the Jerusalem District Prosecutor’s Office.

On June 5, 2011, we called the Jerusalem District Attorney’s Office to ask which prosecuting attorney is handling the case. None had yet been appointed. We asked the same office again on August 24, 2011, i.e. almost seven months after the incident, but the prosecution did not consider the violent death – this fact is not disputed – of a 16-year old boy as something that requiring the immediate attention of a prosecutor. We repeated our query in September 25, 2011. We might as well be speaking to the walls.

October 24 came and went, and Yusuf’s death still didn’t keep the prosecutors up at night. We had reached December 15, 2011, and the boy who had dropped dead from a bullet in his head still failed to arouse the interest of the prosecutors. On January 15, 2012, almost a year after he was killed, Yusuf’s prosecution file was still gathering dust. We kept on pestering, and on March 20, 2012 – that is almost 14 months after the killing – we were informed that on this happy day a prosecutor had been assigned to the case. A week later, we tried to verify with her what steps she had taken with case so far. We were not dignified with an answer.

We repeated the question, to no avail, two months later. We are stubborn people, studied in the ways of banging our heads against the system’s wall, so we asked once again on July 30, 2012 whether the prosecutors made any decision – four months since a prosecutor had been assigned to the case, and more than 18 months since the killing itself, but who’s counting. We did not receive a response.

On January 3, 2013, nearly two years after the killing and nine months after a prosecutor was assigned to the case, she still had no answer for us. Six months breezed by, and on August 4, 2013, the prosecutor informed us that on July 30, 2013, she had made a decision to close the case. The police had identified four suspects; the prosecutor closed the case against three of them for lack of evidence and against the fourth for lack of criminal culpability.

That was the beginning of August. Since then we’ve been trying to get a hold of the investigative file so we can appeal the decision to close it. Until recently, the prosecution had failed in the rather simple job of providing us with it. There were contradictory claims as to what happened to it. The prosecution said it was sent back to the Hebron Police, who in turn said they never got it back. We are happy to report, however, that recently the file was found, photocopied, and will soon be reviewed by us.

Let’s conduct a mental experiment. Let’s say the victim is still 16 years old, still residing in the Occupied Palestinian Territories, but is not burdened with a foreign, Palestinian, name like Yussuf Alhleil; let’s say his name is something familiar, like Yossi Hebroni. Our hypothetical Yossi Hebroni was shot near a Palestinian village. Can anyone imagine that the prosecution would amble slowly to the case after 14 months? Or that it would need 16 more months to make up its mind?

The prosecution is entrusted, since Israel controls the Occupied Palestinian Territories, with protecting its residents from violence. When they are the victims of theft, it ought to bring the thief to justice. When they are killed, its duty is to bring justice to the dead.

The case of Yusuf Fahri Mussa Alhleil shows us how seriously the prosecution takes this duty. It removes another thin layer of the already crumbling patina of the claim that there is something you may refer to with a straight face as “rule of law” in the West Bank. Where the rule of law is absent, what we see is the law of nature, where the strong rule over the weak. The point of our social contract with the government is to overcome nature’s law, under which, to quote Hobbes, life is “nasty, brutish and short.” In the most gentle words possible, in Yusuf’s case – and, unfortunately, in far too many others – the prosecution has betrayed the social contract.

The result is that there is the father who waits in vain for his son to return to him in the field, and killers who know that nothing will happen to them if they kill once again.