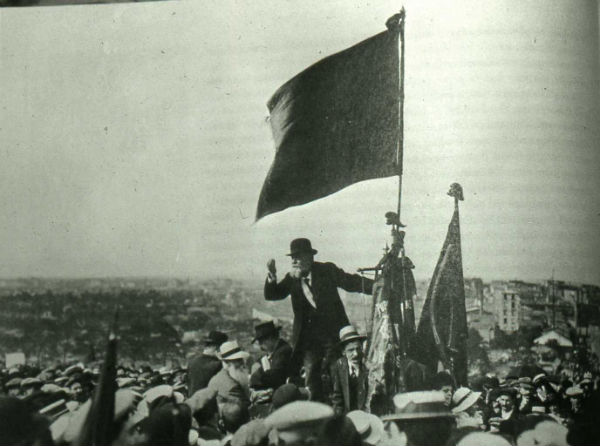 I have a new hero. I first heard of him long ago. It would be difficult to miss his name. Walk down any odd street in France and you’d pass pass a “Jean Jaurès high scool”. Often enough, the street himself will be named after Jaurès. Indeed, the street just south of my house here in Tel-Aviv is “rehov Jean Jaurès”.

But Who was Jaurès? I began looking into that only recently. He was the father of the French labor movement, and thus, in a way, the father of contemprary European socialism. Jaurès was born one decade after the Spring of Nations and came of age at a time when Marxism needed to be reinterpreted.

He was the man for the job, reading communist literature with both love and deep criticism. He accepted marx’s theory of historical materialism, did not believe that the hegemony of a single social class would end it.   Was he a moderate? yes, but he was also a rebel among rebels, recreating the movement so that it would thrive in a possible future.

Jaures could sense the approach of WWI and opposed it. He campaigned against Frances involvement in the war. The right-wing press launched a campaign against him. It succeeded. One man, poetically named Raoul Villain, was moved enough by the op-eds to assasinate Jaurès at cafe “Le Croissant” on Rue Monmartre, one summer day in 1914. The following summer day, French troups were mobilized.

Why am I thiking of Jaurès these days? I live in a land where courageous moderates are assasinated every so often. We’ve lost our own socialist leader, Haim Arlozorov, on Tel-Aviv’s beach in 1933. The assasin was never caught, but during the days preceeding the murder, Arlozorov was the target iof a negative campaign in the revisionist paper “The People’s Front”, and the event was most likely related to it.

More famously, we lost a leader who struggled to put an end to wars. The campaign preceeding Yizhak Rabin’s assasination in 1995 featured his image manipulated to look as though he was wearing an SS uniform. Comparing Rabin and Jaures may do injustice to both, but in a sense, they share something. Both were charismatic leaders who faught to change an ideology rather than abandon it. Jaurès remained a communist. Rabin remained a Zionist. T hey both saught to redefine what these words mean, and both paid the price.

Still, perhaps the reason Jaures comes up in my life right now is that I feel assasinated too, and that we all are, in a way. The newspaper founded by Jaures was named l’Humanité. Think of humanity as a single entity in Israel, and you’ll be regarded as a traitor. Humanism is not only out of vogue, it’s firbidden by God.  50 rabbis, all serving as “head rabbis” in Israel’s different cities, published a decree this morning that flats may not be rented out to Arabs.

Redefining ideologies is frowned upon, narrowing them is the current fad. Gideon Saar is our second education Minister in a row to take critical texts out of school textbooks. Socialism is out the window. Netanyahu’s government is selling everything down to our drinking water. Opposing war is great during peace, but as soon as the skies cloud up, doing so is akin to treason. Killing our foes is the solution to all our problems, ask Likud MK Ayub Kara who said that if the Carmel fire is found to be a case of arson, it’s causers should be hung “like Eichmann”.

We read this, then step out of the house and cross Jean Jaurès st. and we remember that great leaders have existed in history, that great thinkers have, that great people have. Yes, Jaurès too was killed and the war that he failed to prevent was worse than anything we’ve seen in this region, but at least he was there.

We are so Jaurèsless these days, I hope that does not mean that were are hopeless. I bet if Jean was to cross his eponymous street beside me, he’d cheer me up and tell me we are not. That’s what leaders do.

Enjoy Jacques Brel’s fantastic eulogy to the man. Its lyrics describe the hardship suffered by the working classes at the turn of the 20th century. Each refrain consists simply of  the repeated question: “Why did they kill Jaurès?”.

And don’t miss its reggaesque interpertation by Zebda, a band from Toulouse. Song begins at min. 1:00, right after the actor with the very fake-looking beard concludes his soliloquy.