The Jewish Federations of North America support disaster relief at home but human rights abuses in Israel/Palestine. Why don’t they see the contradiction? 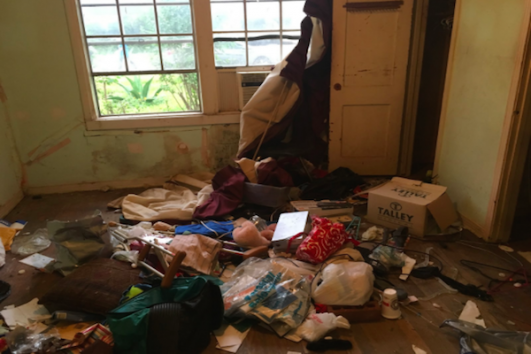 Inside a Houston home flooded by Hurricane Harvey (Elias Newman)

I arrive to the same scene each day—drenched clothing, scattered photo albums, a small mountain of moldy furniture. It has been more than two months since Hurricane Harvey devastated the Houston area, but the relief efforts will continue well into 2018 to repair over 200,000 water-damaged homes. The 80% of local homeowners without flood insurance are applying for government aid through FEMA, yet these funds are only enough to buy building materials—they don’t include the cost of labor.

Religious groups and nonprofits, like the Jewish organization where I currently volunteer, help fill the gap by providing free debris removal to homeowners in need. Our support comes from private foundations and individuals, including donations and volunteers sent from Jewish Federations throughout the United States.

As I wander through the collapsing homes in Houston, I’m brought back to the demolished buildings I saw in the West Bank earlier this year. Israel has demolished approximately 50,000 Palestinian homes and structures since 1967. That’s around 1,000 families losing a home per year. I met children in the West Bank who have trouble sleeping since waking up to their homes being demolished, families whose finances never recovered after having to rebuild, and Palestinian communities that continue to grow while losing more and more of their land.

To obtain a building permit in Israeli-controlled Area C of the West Bank, Palestinians must apply for a permit through the Israeli Civil Administration (Israel’s military government in the occupied territories). With a permit rejection rate well over 90%, families are forced to build homes without permission, despite the high likelihood of future demolition. Even when a structure is built with a permit, communities still face demolitions as collective punishment for terrorist attacks, either due to their physical proximity to the attack or relation to the suspect.

It doesn’t matter if you’re a Texan or a Palestinian—losing a home is financially and emotionally devastating. So when Jewish Federations send volunteers and donations to rebuild homes in Houston, why would these same Federations support home demolitions in the West Bank?

Haaretz recently reported that Jewish Federations in North America donated over six million dollars to settler organizations between 2012 and 2015, funding settlement expansion and indirectly fuelling demolitions in the occupied territories. While Jewish settlers have the funds to build in East Jerusalem and the West Bank, their new Palestinian neighbors often face harassment and increased fear of eviction.

The process begins with Jewish settlers receiving support from organizations and the Israeli government to create new outposts and expand existing settlements—in violation of international law. To expand the settlements and push out surrounding Palestinians, settlers advocate for demolitions by sending photos of permitless buildings to the army. Israeli officials then visit Palestinian villages in militarized vehicles, harassing community members while collecting further information about homes and structures. Under mounting pressure from right-wing organizations and political leaders, the army ultimately demolishes these “illegal” homes with industrial-grade bulldozers.

Before understanding the realities of home demolitions, I remember visiting the Palestinian Bedouin community of Umm al-Khair on my first trip to the West Bank. These Bedouin families legally purchased their land after being expelled from Israel in 1948, but now face surveillance and attacks from their neighbors in the settlement of Carmel. During my visit, I met a Palestinian civil engineer from the area and naively commented “how amazing it must be” to contribute to construction in your own community. He chuckled out of politeness and replied, “What are you talking about? We can’t build anything here with the settlers watching next door.” 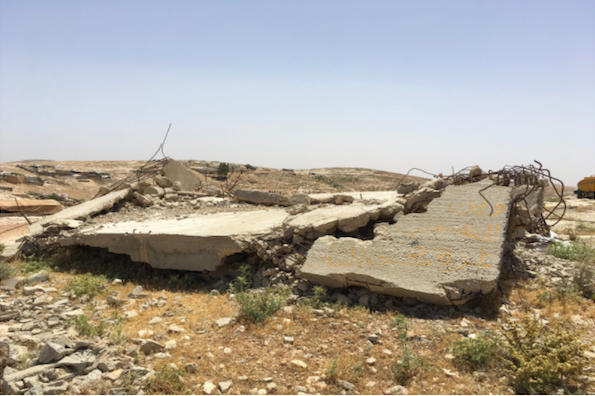 The entire demolition process unfolded in front of me during a solidarity trip this past summer with the Center for Jewish Nonviolence. Led by a historic coalition of Palestinian, Israeli, and Jewish organizations, a group of over 100 mostly diaspora Jews spent two days building the “Sumud” Freedom Camp in the South Hebron Hills of the West Bank. “Sumud” means steadfastness in Arabic, symbolizing the Palestinian struggle to remain steadfast on land where they have lived and worked for generations. The encampment was part of a successful effort to return Palestinian families back to the abandoned community of Sarura, reclaiming the caves they left in the 1990s due to increasing settler violence and an Israeli military “firing zone” order.

Within the first hour of our presence in Sarura, drone cameras from the nearby Jewish settlement of Ma’on flew overhead and Israeli military vehicles appeared in the distance. After two days of visits and complaints from Jewish settlers, Israeli officers and soldiers appeared under the cloak of night without a military order to destroy our encampment, steal our equipment, and assault the families and activists present. The army continued visiting Sarura over the ensuing weeks to demolish temporary structures and arrest Palestinian youth, presumably responding to sustained complaints from the Jewish settlers of Ma’on.

Demolition and dispossession is the reality of Israeli occupation, a daily nightmare for Palestinians and a moral disaster for the Jews who enforce and support it. There is no denying the connection between funding Jewish settlers and increased Palestinian home demolitions—every dollar given to pro-settlement organizations is a dollar spent displacing Palestinian families. Just this month the army ordered 300 Palestinians in the Jordan Valley to remove all of their property from a decades-old community. It is no coincidence that this mass eviction coincides with the creation of two new Jewish outposts right next to the community under threat.

Elias Newman is an educator and musician from San Diego, CA. His interests include youth education on Israel/Palestine, immigration issues, and dairy-free ice cream.