For the past 15 years, famed Gaza director Ali Abu Yassin has headed dozens of theater productions at Al-Meshal Cultural Center. Among them were classics such as Anton Chekov’s “The Bear,” while others focused on children’s rights, women’s rights, and the right to education.

All that came to a halt last Thursday, when the Israeli Air Force bombed Al-Meshal, one of the Gaza Strip’s most important cultural facilities. They claim that the building — which comprises of two theaters, three large halls, and a department serving the Egyptian community living in the Strip — was being used by Hamas’ internal security services. The attack was condemned by various Palestinian NGOs operating in Gaza.

Upon seeing Al-Meshal’s destruction, Abu Yassin was crushed. “This center has been our home for years. We have lost the only home for artists in Gaza,” he said. 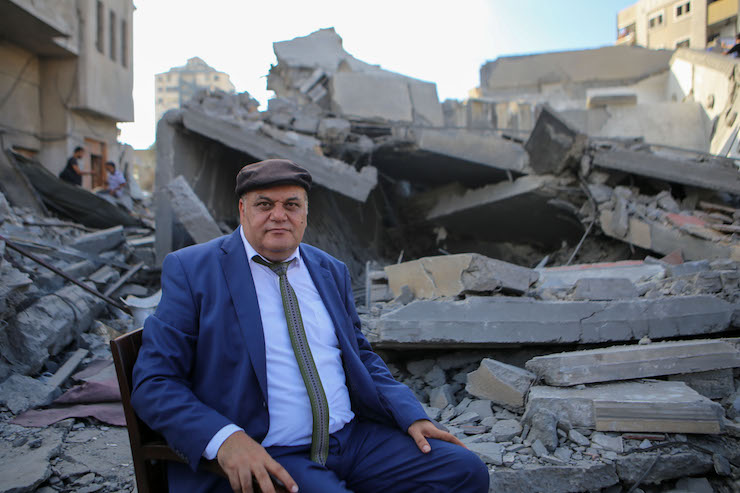 Since its establishment in 2004, Al-Meshal served as a home for hundreds of plays, ceremonies, exhibits, musical performances, and national ceremonies. The idea for a cultural center began in 1996 with Said Al-Meshal, a Palestinian businessman living in Australia, who sought to bolster culture and science in Gaza. The center also included recreational activities for children who were affected by the three successive wars in Gaza.

The center also served as a space for some of Gaza’s top musical acts, such as Al-Anqaa (The Phoenix), a Palestinian folklore performance group comprised of 25 men and women. The group, which is famous for its dabkeh performances, established the first dabkeh school in Al-Meshal for 250 children.

“When we heard the news of bombing the center, we tried to stay strong in front of our students,” said Mohamed Obeid Samar, Al-Anqaa’s director. “We received calls from children crying who could not believe what had happened. The center was their outlet to meet and share good times with their peers. They had big dreams to be professional dabkeh dancers in our band.”

Al-Meshal is by no means the first of Gaza’s cultural institutions to be destroyed by Israel over the past decade. On January 9, 2009, Israeli aircrafts bombed both the Palestinian Red Crescent Society’s theater building and the Gaza School of Musical Arts. In mid-July this year, Israeli planes bombed a building in central Gaza City, and the collateral damage destroyed the Arts and Crafts Village, another of Gaza’s cultural centers, established in 1998 by the Gaza City municipality. 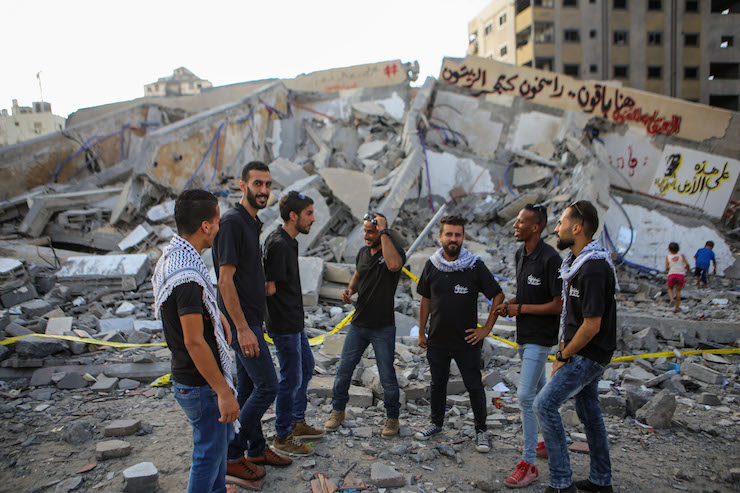 Mohammed Al-Dalu, a 23-year old anime artist who lives with a disability, used to have his work exhibited at the Arts and Crafts Village. Today, he and Gaza’s other artists feel disheartened by seeing another cultural center destroyed. “We feel alive when we draw. Gaza’s artists need places that seek peace,” said Al-Dalu.

Jamal Abu Al-Qumsan, a Gaza-based actor, filmmaker, and theater impresario, was in the midst of directing a play titled “Beirdiko Hik” (“Does this Satisfy You”), a critical look at the role of women in Palestinian society, when the attack happened. Fortunately, he and his 10-actor troupe were not in the center when the missiles struck. Their equipment, however, was not as lucky.

“Dozens of artistic performances produced in Al-Meshal moved into international shows and festivals in European and Arab countries,” said Abu Al-Qumsan. “The occupation wants to tell the world that Gaza has no cultural life, they want to have a gloomy picture for Gaza as being the land of extremism and killing.”

Asmaa Jomaa, Director of Activities at Al-Meshal, said that, with the center’s destruction, Gaza lost its last artistic foundation, as well as a launching pad for Palestinian artists on the world stage. “Al-Meshal has left fond memories for many people in Gaza. This center was the first step toward success for many artists in Gaza who are now competing at the international level.”

According to Jomaa, Gazan artists aren’t waiting around for the authorities to rebuild Al-Meshal, and are currently preparing to launch a fundraising campaign for the center’s reconstruction. 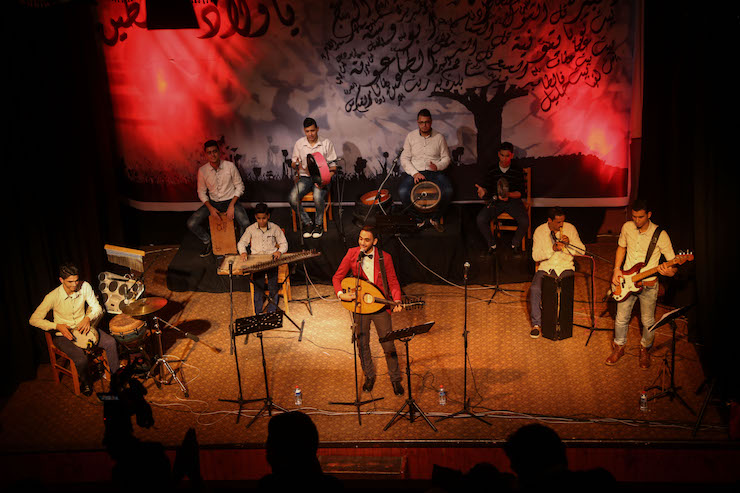 Samir Al-Meshal, Director of Al-Meshal, vehemently denies the Israeli allegations that his center served as a Hamas base, saying that it has always been a meeting place for Gaza’s artists and intellectuals. “The Israeli allegations about targeting the center are all false, and they have no excuse for targeting this cultural center. This center is totally neutral and is open to everyone in Gaza.”

Anwar Al-Berawey, undersecretary of the Ministry of Culture in Gaza, blames the siege for the disintegration of the Strip’s cultural scene. The Israeli authorities refuse to issue exit permits for artists from Gaza, forbidding them from networking with cultural workers in the West Bank and outside Palestine. He added that Gaza has 50 cultural centers, most of which have slowly decreased their activities due to lack of funding.

“During the 2014 war against the Gaza Strip, about 20 cultural centers were damaged, including three theaters,” said Al-Berawey. “Now, after the destruction of the main cultural centers in Gaza, artists will have to face great obstacles.”