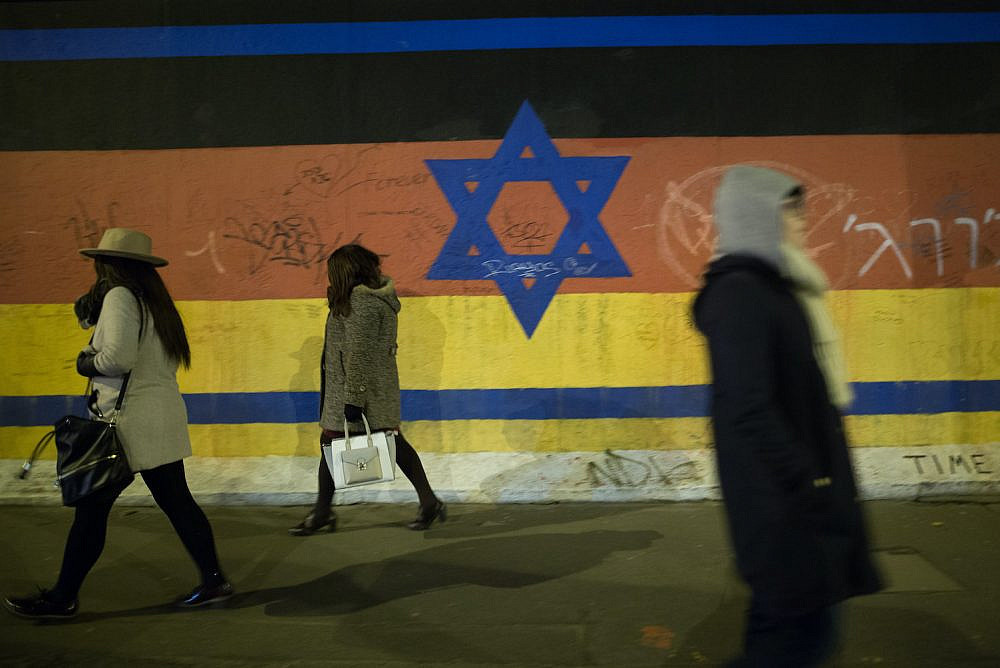 People walk by a mural depicting a combination of the Israeli and German flags on the Berlin Wall, March 13 , 2016. (Noam Revkin Fenton/Flash90)

In Germany, Jewish Israelis who seek to challenge the Zionist narrative are now effectively considered antisemitic.

About a year ago, a dozen Jewish Israeli artists and scholars living in Berlin started a program called The School for Unlearning Zionism as a “space for joint learning and internal, Jewish-Israeli self-negotiation with the Zionist story.” The project has advertised daily virtual events throughout October with both Israeli and Palestinian speakers, from historian Ilan Pappé on “Zionism as Settler Colonialism,” to Palestinian policy analysts Marwa Fatafta and Salem Barahmeh on “The Second Intifada, Oslo and what comes next.”

In addition to the lectures, which according to organizers have had between 25 to 80 participants, the initiative has set up film screenings and an art installation at the Weissensee Kunsthochschule, an art college in Berlin. But on Oct. 8, just days into the program, the university administration abruptly retracted the meager funding for the program — symbolic fees of 100 euros for each speaker — and took the page on its site down, without even notifying the organizers.

“I was very surprised the university leadership took action without speaking to me and without looking into the matter and speaking to anyone in the program about the art installation,” said Professor Mathias Jud, a visiting professor at the art school who has been overseeing the work of several Jewish Israeli students researching the concept of “unlearning Zionism.”

The university’s response was prompted by an email it received on Oct. 7, which was viewed by +972, from Frederik Schindler, a journalist with the conservative Die Welt daily. Schindler turned to the university for comment about the program with the claim that it has ties to the Palestinian-led Boycott, Divestment and Sanctions (BDS) movement. He specifically named four Jewish Israelis on the speaker list as supporters of BDS, which is considered antisemitic in Germany.

In the email, Schindler also quoted two tweets highly critical of the event, including one from Volker Beck, a hardline pro-Israel politician in Germany who served as an MP in the Bundestag till 2017. Beck argued that the event can go on, but not with federal money.

In May 2019, the German government passed a resolution that deems support for BDS antisemitic, very literally because of its association in German collective memory with the Nazi-era boycott of Jewish businesses. It includes language about denying state funds to those who question Israel’s right to exist and support or actively call for a boycott of Israel.

While the resolution is not legally binding, activism or dialogue around boycotting Israel — or even challenging the Israeli government line — are considered taboo in Germany, at least in public institutions. Last June, the president of the Jewish Museum in Berlin was forced to step down after tweeting about a letter by Israeli academics who reject the equation of BDS with antisemitism.

Considering the relatively small size of the project, it appears the university capitulated to right wing pressure — purportedly prompted by Schindler’s email. “We had to decide quickly how to handle the protest against the realization of this event,” university spokesperson Birgit Fleischmann told +972 in an email, referring to “noise” made on social media. She said that Schindler indeed informed them of the program, and confirmed that the reason for the withdrawal of funding is parliament’s anti-BDS resolution, along with a November 2019 declaration by German university heads to endorse it. 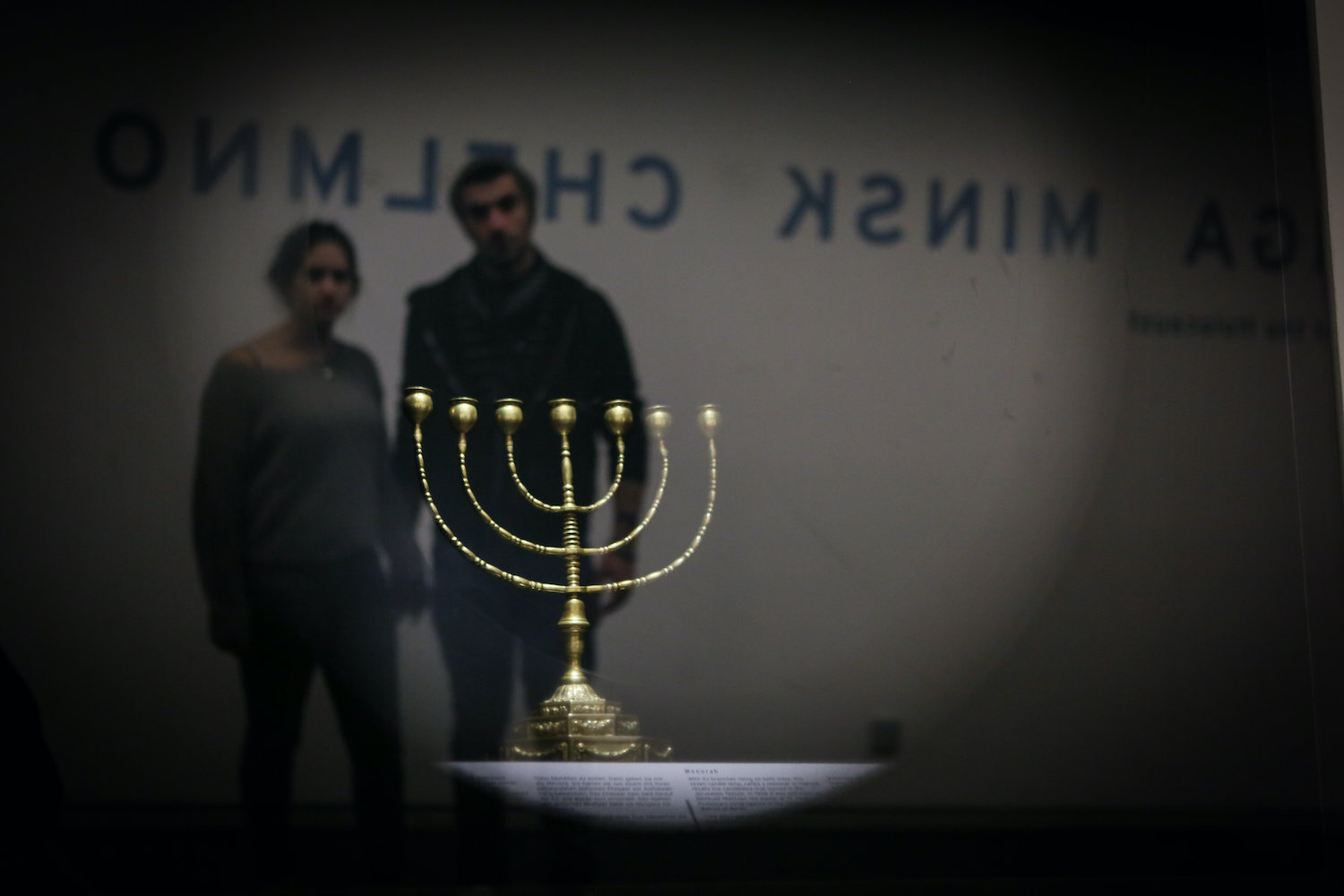 The university did not specify what about the program qualifies it as supportive of BDS, however. Asked how they respond to the fact that Jewish Israelis now feel silenced, Fleischmann apologized to all those who have been affected by the university’s decision and said that, with federal support out of the question, the university will “try to support the organizers in finding other possibilities to finance the project, which requires a small budget, so that the lectures can happen as the students had planned.”

Jud said this is the first time he has been involved in an academic event that was denied funding due to its content. He sees this as a clear violation of academic freedom, and has made his opposition clear to the university. It is “very problematic” to cancel the events by claiming they violate the anti-BDS resolution, he explained, “because that resolution states explicitly that you cannot cancel Jewish events. It is explicitly against the boycotts of events by Jews.” Indeed, in trying to uphold a ban on boycotting Jews, the university is targeting and effectively boycotting certain Jews.

The School for Unlearning Zionism has nothing to do with BDS, says Yehudit Yinhar, one of the group’s founders who grew up on a kibbutz and has been living in Berlin for a decade, currently studying art at Weissensee Kunsthochschule. “The practice of unlearning is related to looking at power relations and your own role within them. In order to dismantle hegemony and be partners in struggles for equality within spaces where power relations are not equal and privilege is a resource, we must have this conversation amongst ourselves,” she remarked.

Yinhar explained that the School for Unlearning Zionism provides her with a political home, where people can share personal stories and texts. “Really important moments of growing and learning together have been happening in this space, and then this institution comes and says, ‘we need you to talk differently or go back to Israel where it’s not a problem. But you can’t be like that here. That doesn’t work with our story, we own your history.’ German policy is turning us into good or bad Jews.”

The spokesperson for the Israeli Embassy in Berlin declined an interview. Instead, he referred me to their tweets on the issue, in which they not only stand by the university’s decision, but explicitly call the program antisemitic.

“Hosting a workshop whose title already negates Israel’s livelihood is an embrace of anti-Semitism,” one tweet reads. The embassy also invokes the International Holocaust Remembrance Alliance definition of antisemitism, which cites the denial of the Jewish people’s right to self-determination as an example. “This series of events falls under this definition and should be recognized for what it is: anti-Zionist and anti-Semitic,” they wrote in another tweet.

For Shir Hever, an Israeli political economist who is active in various educational and activist groups on Israel-Palestine in Germany and is one of the program’s guest speakers, the real issue is not the battle against BDS but the rise of the pro-Israel far-right in Germany.

Hever says it is no coincidence the original drafters of the anti-BDS resolution are the AfD, a far-right Islamophobic and pro-Israel party. Similar to representatives within the GOP who claim to be pro-Israel but peddle in antisemitic conspiracy theories, the party includes leaders who wave Israeli flags while denying the Holocaust.

“Suddenly there are new movements — mostly pro-Israel groups and German-Israel associations — that say antisemitism is not a German Christian problem but an imported Muslim one,” explained Hever. “That allows them to rewrite history. It’s not about hating Jews but putting Jews into a certain box: We love the Jews as long as they are in Israel fighting the Muslims,” which serves a white nationalist German narrative, he added.

Around 25,000 Israelis live in Berlin, a space Yinhar describes as “between Tel Aviv and Ramallah,” where the separation between Israelis and Palestinians that she grew up with no longer exists. Berlin is also home to the largest Palestinian diaspora community in Europe, numbering 60,000, according to Sa’ed Atshan, co-author of the book “Moral Triangle: Germans Israelis, Palestinians.” The book is based on research the authors did in 2018 in Berlin, asking representative samples of all three groups what Germany’s moral responsibility is toward Israelis and Palestinians living in the country.

Atshan says it is common for Jewish Israelis in Berlin to be accused of antisemitism by white Christian Germans, but that Palestinians are disproportionately censored. “Palestinians in Germany are in a precarious position, he remarked. “It is political and social suicide for Palestinian Germans to be out publicly about their politics. They are on the receiving end of false accusations of antisemitism coupled with racism against migrants, Arabs and Muslims.”

Atshan also describes Berlin as a place that provides a fruitful “post-Zionist context,” especially considering that many Israelis and Palestinians live in the same neighborhoods. But there is a disconnect between the more private, grassroots discourse and the institutional discourse, he added.

“There is a politics of guilt that leads to stifling of speech and intellectual debate,” Atshan continued. “At the same time, there is tremendous openness and ability to reckon with the past and engage with questions of politics.”