Security makes a comeback in peace. If the generals avoid mistakes of the past and put action behind words, they could have an impact. 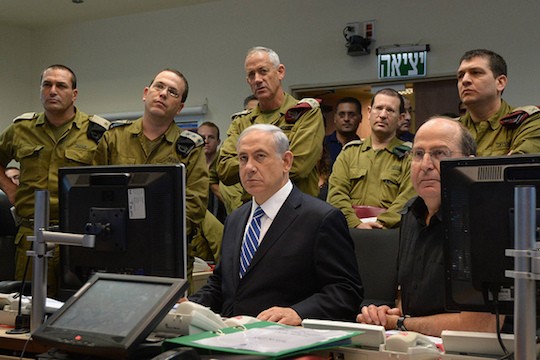 Over 100 retired and reserve generals, brigadier-generals and senior police officials, including a former head of the Mossad, have signed and published a plea to Prime Minister Netanyahu to reach a reach a regional-based two-state diplomatic resolution to the Israeli-Palestinian conflict.

In impassioned language, they state their credentials as fighters in Israel’s wars who “fought powerfully on behalf of the state,” and were “impressed by your [Netanyahu’s – ds] wise leadership during Protective Edge.”

They then state their fear that the operation over the summer,

could turn out to have been in vain if we don’t learn that we must take action to prevent the next war. The government of Israel and its citizens do not have the privilege of sitting around with arms folded. The time has come to take responsibility for our future and take up the historic opportunity that has been presented to us following the operation.

Retired IDF Gen. Nati Sharoni, one of the signatories, told +972 Magazine that the historic opportunity relates to the fact that Egypt, Jordan, Saudi Arabia and various Gulf states are prepared to revive the Arab Peace Initiative following Protective Edge. The letter was published in Yedioth Ahronoth, one of the top-circulating Hebrew daily papers, along with a double-spread article interviewing some of the signatories.

The authors called upon the still-painful memory of the surprise 1973 Yom Kippur War, “a war whose source was diplomatic blindness of the leaders of Israel,” they write. “We are terrified that the same blindness will undermine the opportunity before us.”

The generals make two interesting points. First, they emphasize the regional approach, which seems to be gaining traction in Israeli discourse lately. And tucked into the letter is the assertion that the West Bank and Gaza must be dealt with simultaneously and together – in contrast to the government’s de facto policy of separation.

We therefore call on you to adopt the regional-diplomacy approach and open negotiations with moderate Arab states and with the Palestinians (in the West Bank and Gaza Strip as one), by leveraging the Arab-Saudi initiative and conducting negotiations over its items…

It is not the first time I have heard senior security figures insist that Gaza and the West Bank must be resolved in an integral way for a diplomatic resolution to advance security. (Gen. Sharoni, like many others, avoids the term “peace,” because he doesn’t believe that idealized peace with Arab states will be achieved any time soon.)

But the overriding theme is that a two-state diplomatic resolution is the real means to security in the region. “The wisdom of leadership is to realize the limits of force. You need to know that there are limits to force,” said Gen. Sharoni.

The writers also push the bar by repeatedly referring to “moderate Arab states,” practically an oxymoron in the mainstream Israeli narrative. While many Israelis still view the Middle East as a single blob of fanatical Islamic terror states poised to devour tiny Israel, they make pragmatic distinctions between regional actors.

You know that the moderate Arab states wish to advance a diplomatic agreement with us that will allow us to cope together with our common enemy[sic]…You know that this is the real answer to the Iranian threat and the threat of terror from ISIS, Hamas, Hezbollah, al Qaeda and other terrorist organizations. And you know that only the regional-diplomatic approach and agreements with the moderate Arab states have a chance of bringing an arrangement with the Palestinians, stability, security and economic success.

They conclude: “We know what is needed to achieve security for Israel, and we know that regional cooperation will contribute to it…Lead – and we will stand behind you!”

The pessimistic reading of this initiative is that during the Oslo years, the Left over-promised when it linked the peace process with security, failing to anticipate or cope with the violence of spoilers. It will be hard to get people to believe again that peace equals security – especially if standards are set too high.  Remarkably, day after day, I still hear Israelis believe that the occupation maintains security. Declarations have been made before, the “Gatekeepers” have stated their criticism, the Council on Peace and Security (retired high-level IDF officers for a two-state peace, several of whom signed the letter) has existed for years – and yet nothing changes.

Still, 100 of the highest-ranking figures from deep inside the military establishment are more meaningful to mainstream Israel than a handful of young people who breach social norms by refusing combat or intelligence reserve duty.

But if the generals wish to move from calling for change to helping make it, they should consider further steps: first, they should maintain ongoing public pressure rather than a single shot, and recruit more people and join those people outside the security establishment who are committed to the cause. Asked if follow-ups are planned, Sharoni responded that he would continue to warn publicly against the dangers of the emerging one-state reality and the need for a change of policy. “Do we have a choice?”

Next, the generals should sharpen the point not clearly stated in the letter: the last five years and three wars have proven, hopefully, that status quo of Palestinian statelessness and Israeli military rule is a security liability for Israel. Suicide bombs have been replaced with rockets, but the occupation remains the primary source of Palestinian violence against Israeli civilians, and certainly of Israeli violence against Palestinians. The idea that occupation defends Israel is bankrupt.

Third, the generals should get to work: join track-two initiatives, generate proposals for post-occupation security arrangements, do what generals do best — get the plans in place. The letter pleads to stop making excuses; the tough guys should help see that there are none.

Related:
In the confrontation between Bibi and Obama, Palestinians are a sideshow
Netanyahu’s status quo strategy: Thwarting a Palestinian state
Israeli settlements, U.S. policy: The gap between values and actions