Haya Asaad waited for more than a decade for her fiancé to get out of Israeli prison. 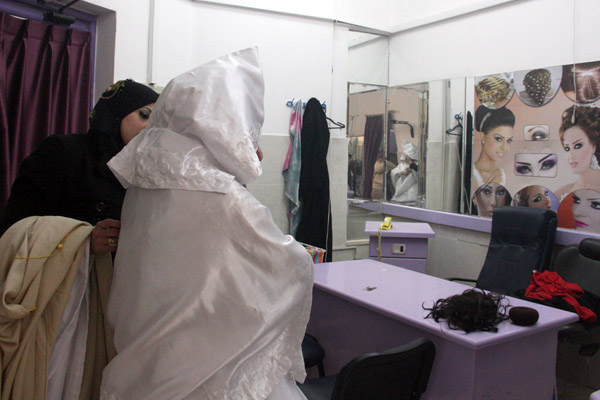 GAZA CITY — At a modest dressmaking shop in downtown Gaza City, the tailor makes the final touches on Haya Asaad’s classic tight wedding dress. But Asaad isn’t your typical bride: an Israeli court kept her wedding on hold for more than 12 years while her fiancé was behind bars.

The story began when Asaad, now 30, was studying business administration. Eyad was a teacher at the same school, and the young couple immediately fell in love. Eyad proposed after only two months; everything went well until the day the two were due to register their marriage at a religious court. Eyad had totally disappeared.

Not knowing her fiancé took part in operations against Israel, Asaad didn’t learn anything about Eyad’s whereabouts or condition for three months. He had allegedly been arrested by the Israelis, something she never believed until he called her confirming the rumors.

“I immediately hung up the phone. I couldn’t imagine myself talking to someone in an Israeli prison,” Asaad told this reporter on a stroll through Gaza City. “I thought this would put my family life in danger.”

Eyad never seemed like a fighter. “He was such a funny and fashionable man; he never talked about resistance or such issues,” Asaad says. “I remembered him always wanting his shirts to be ironed and his hair to be styled. It took me a while to absorb it.”

Eyad was arrested at Israel’s Abu Houli checkpoint in Gaza City, where he worked. He was trying to cross into the city of Khan Yunis, also in Gaza, where he lived. That was in 2002, three years before Israel withdrew from the Gaza Strip.

A group of his colleagues from Fatah’s Al-Aqsa Martyrs’ Brigades had been arrested a few days earlier. He knew this would be his fate too, but of course he had never even told his beloved that he was a militant.

Eyad then spent two years trying to call Asaad from Israel’s Nafha prison to persuade her to wait for him. She considered it a fantasy she wanted no part of.

“No one guarantees Israeli decisions, and I can’t get too old in this society — this is how I thought,” she explains. “But after several attempts by him, I believed in him and believed our love was eternal.”

Eyad received 26 years in prison, a sentence later reduced to 12 years. Asaad chose to wait, even though her parents were against it.

“My mom said I would lose years waiting, and no one was sure he would be freed on time — not only my mom, everyone around as well,” recalls Asaad, with the joy of someone who has proved others wrong.

Asaad counted the days for 12 years, but she also made sure to keep busy so she could carry on. She worked for NGOs as a social researcher and went to the gym daily to relieve the stress. Most importantly, she said, she spoke with Eyad when he could sneak phone calls, or via the local radio, where his fiancée dedicated to him words of love.

“Today, now that we’re finally together, I feel like the 12 years went by in the blink of an eye,” says Asaad, who celebrated her marriage at Gaza’s only five-star hotel two weeks ago. As a Palestinian in Israeli prison, Eyad received a monthly salary from the Palestinian Authority. He saved it all to prepare for the big day.

Asaad says now it’s time for her to live with her husband for the rest of their lives raising children. “He has already done what he wanted to do for his country,” she adds. “Now it’s time for his wife and children.”

Abeer Ayyoub is a Gaza-based journalist who recently won the Richard Beeston Bursary from the ‘Times of London.’ Follow her on Twitter: @abeerayyoub