Wednesday saw a particularly deadly day of violence in the Gaza Strip, while diplomatic efforts to reach a ceasefire continued with urgency.

According to officials at the Palestinian Health Ministry, 129 people were killed and more than 200 wounded in Gaza throughout Wednesday. Israel’s Operation Protective Edge has killed a total of 1,400 Palestinians and wounded more than 7,500. The high death toll comes after a bloody day on Tuesday, which saw more than 120 people killed by Israeli airstrikes in the Strip.

The Israeli army announced that three of its soldiers were killed on Wednesday afternoon, pushing the military death toll to 56. 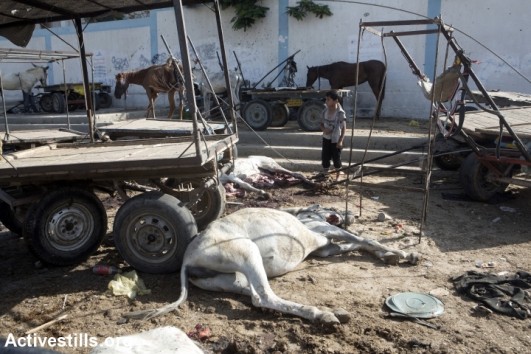 Dead horses lie in the street following the overnight Israeli shelling of an UNRWA school where some 3,300 Palestinians were seeking shelter, Jabalia, Gaza Strip, July 30, 2014. At least 20 people were killed in the attack, which injured more than 100. So far, at least 1,400 Palestinians have been killed in Israel’s offensive. In addition, 56 Israeli soldiers have been killed, as well as three civilians in Israel (photo: Activestills)

In one of two major attacks in Gaza Wednesday, a UN school in the Jabaliya refugee camp was struck overnight by what is believed to have been Israeli artillery. The attack killed at least 19 people. The school was attacked three times, UNWRA said, despite the fact that the agency had informed the army of its exact location a number of times. The White House condemned Israel’s shelling of the school.

“We have visited the site and gathered evidence. We have analyzed fragments, examined craters and other damage. Our initial assessment is that it was Israeli artillery that hit our school, in which 3,300 people had sought refuge,” said UNRWA spokesperson Christopher Gunness.

Just hours later, after the Israeli military unilaterally declared a partial humanitarian ceasefire, the second major attack of the day occurred. Ma’an News Agency reported that as thousands of Gazans took advantage of the temporary ceasefire to shop on the third day of the Eid holiday in a market in Shejaiya, they were targeted in an Israeli attack that left 17 people dead and 200 wounded, many seriously. 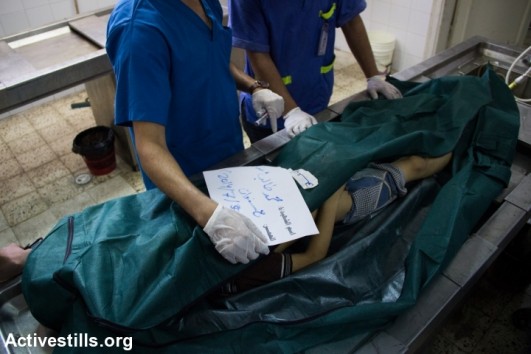 The bodies of Palestinians lie in the Al Shifa Hospital morgue in Gaza City following an attack on an UNRWA school in Jabaliya, July 30, 2014 (photo: Activestills)

In a diplomatic show of force, Bolivia canceled its visa agreement with Israel and declared it a “terrorist state” in protest of the military operation in Gaza. Bolivia broke off its diplomatic ties with Israel in 2009, in protest of Operation Cast Lead. In another diplomatic move, El Salvador joined Brazil, Chile, Ecuador and Peru in recalling its Israeli envoy over the violence in Gaza.

While Palestinian President Mahmoud Abbas called on UN Secretary-General Ban Ki-moon to recognize Gaza as a disaster area, UNRWA notified Israel that it would not be able to accommodate further waves of refugees if the attacks on the Strip continued. UNRWA’s Gaza-based director, Robert Turner, stated that of the 400,000 Gazans who had fled their homes, 220,000 were being housed in the agency’s schools.

According to CNN, the U.S. agreed to an Israeli request for ammunition, including 120 mm mortar rounds and 40 mm ammunition for grenade launchers.

An Israeli delegation traveled to Cairo earlier in the day to discuss with Egyptian officials the possibility of a ceasefire, while chief Palestinian negotiator Saeb Erekat was set to travel to Qatar and expected to meet with Hamas political chief Khaled Mashal to discuss a possible agreement.

Related:
Will there be peace if Palestinians lay down their arms?
Gaza catch-22: When a humanitarian ceasefire becomes a death trap
Protective Edge: The disengagement undone