In reaction to the escalation of violence and what are known as “price tags” committed by settlers against Palestinians in the West Bank, Ta’ayush (Arab-Jewish partnership group) organized a protest action with the Sheikh Jarrah Solidarity movement in the South Hebron Hills on Saturday March 26. Sixteen were arrested and after a night in jail, released without charge. 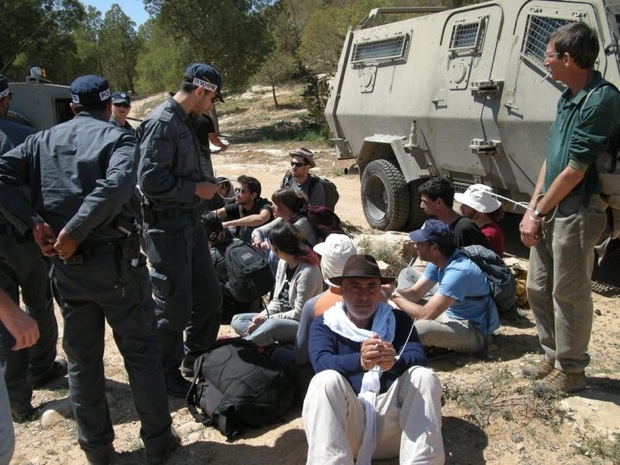 In recent weeks, cooperation between settlers and the Israeli military appears stronger than ever. Such cooperation manifests itself not only through the IDF’s decision to turn a blind eye to physical assaults against Palestinians and failure to detain settlers, but also by actively choosing to break its legal obligation to protect Palestinian farmers from settler attacks and insure they are able to work, as ordained by the Supreme Court. The presence of just one or two settlers on Palestinian land is sufficient for the IDF to declare the area a closed military zone and evacuate the area – which means disallowing the Palestinians, who have made no provocation, to graze their herd or work their farmland.

Closing these areas off to Palestinian residents, sometimes for long periods of time, severely damages their income and livelihood, which is fragile as it is since they live in mostly desert area. The Civil Administration recently declared that it has no intention of dealing with settler incursions to private Palestinian lands, sending a clear message to the settlers that these lands are up for grabs and they are permitted to do as they please.

Attacks against Palestinians have continued throughout the West Bank that include physical assaults, vandalism, the use of live ammunition and the general sowing of panic. On March 21, Mahmoud Awad, a resident of Tuba, a village in the South Hebron Hills, was attacked while he was going with his donkey to the village of At-Tuwani. Not far from the first house of the village a masked settler from the illegal outpost of Havat Ma’on, ambushed him and stabbed him in his right arm and in his chest.

A resident of At-Tuwani witnessed the incident from a close distance and immediately informed the other residents and the internationals present in the village . Mahmoud Awad was treated and transported to the hospital in Hebron, while the soldiers and the Israeli police questioned the witnesses and gathered evidence. The Palestinians who witnessed the attack claims he recognized the assailant, one of the settlers who took part to the riots on March 19th in At-Tuwani. Other violent acts have been reported lately in Awarta and Beit Umar.

Last Saturday, Taayush activists went to visit Tuba, which, like many in the South Hebron Hills, is comprised of simple structures and tents that are under constant threat of being demolished. There is no running water in Tuba and its only source of electricity supply is from wind turbines and solar panels installed by COMET-ME, an organization set up by Israelis that provides green energy systems to Palestinians in this region.

After speaking with the residents of Tuba we went to At-Tuwani. We were confronted by a large group of soldiers, who were accompanied by Yasam (special IDF riot force). They were especiallay hot-tempered and aggressive.  The soldiers informed some, though not all, of the activists that the area has been declared a closed military zone and immediately began making arrests (normally you are given several minutes to evacuate).

Sixteen people in total were arrested for breaching a closed military zone. They were taken with force, all handcuffed and some were beaten. Although we were forced to evacuate due to the order, the soldiers and police did not apply the closed military zone to the settlers of Havat Maon, who were free to roam around. One of the activists asked a police officer why he was not wearing his ID badge and the officer decided to accuse the activist of kicking him in the chest. The same officer accused another activist of threatening him.

Police confiscated a camera from one of the activists. When the camera was returned to him, it turned out most of the footage was erased. Apparently they realized that documentation of the gratuitous and violent arrests should not go public. Here is the footage of the tape that was salvaged.

We were taken to the police station in Hebron. After several hours of investigation, the police offered to release us on condition that they sign a form according to which they cannot enter the southern West Bank for 15 days. Four out of the 16 refused to sign the terms of release and were transported to a detention cell. Almost everyone followed suit and decided not to sign the terms. We spent the night in jail and were brought before a judge the following day.

In his ruling, the judge asserted that a closed military zone may not be declared:

1) As a means of punishment

3) Automatically when there is a skirmish

The judge released all the activists without implementing the 15-day expulsion order.

Our elation at the just decision by the judge is just another indication of the poor state democracy is in between the Jordan River and the Mediterranean Sea, where it is still unclear that people should be able to engage in legitimate forms of protest without being penalized.

Dolev Rahat is an Israeli activist with Ta’ayush and the Sheikh Jarrah Solidarity Movement.