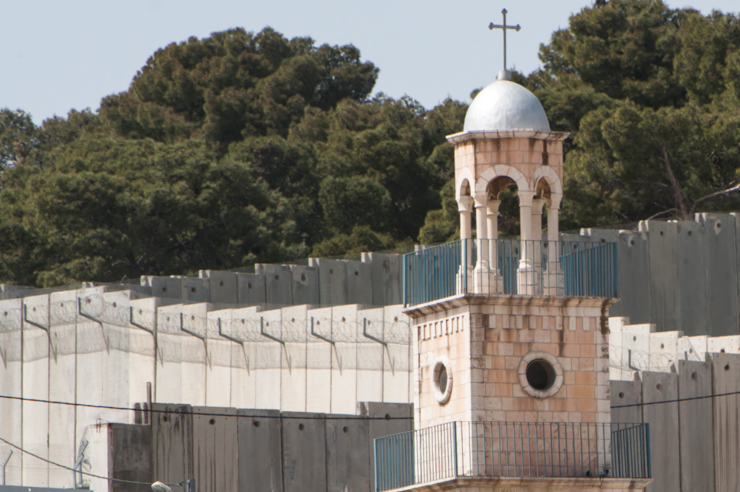 Church-based activists in the U.S. are listening to their Palestinian Christian counterparts’s call to boycott, divestment and sanctions (BDS). Here, the Greek Orthodox Church of Saint Lazarus rises near the Israeli Separation Wall dividing Palestinian neighborhoods on the Mount of Olives in East Jerusalem. (photo: Ryan Rodrick Beiler/Activestills.org)

In the coming days, three more U.S. churches will consider resolutions to apply economic leverage against the Israeli occupation.

The bloodshed in Gaza, Netanyahu’s election rhetoric, and a peace process in which even President Barack Obama has lost hope have convinced many that the movement for boycott, divestment, and sanctions (BDS) is the best remaining hope for a just peace.

Now, those who “support divestment or other economic activism will have more space in which to make their voices heard,” says Michael Merryman-Lotze of the American Friends Service Committee (AFSC), a Quaker agency whose resources have been used by other churches to develop their resolutions.

But as new voices rise up, the Israeli government and its allies are trying to shout them down with an unchanging refrain of anti-BDS slanders. Apart from broad-brush charges of anti-Semitism, these opponents often accuse churches of unfairly “singling out” Israel while ignoring Islamist violence in Syria and elsewhere.

When asked the “what about Syria?” question, Merryman-Lotze, who recently served as the AFSC’s Interim Middle East Regional Director, offered a pointed response (emphasis added):

We have publicly spoken out against violence in Egypt, Libya, Syria, Iraq, and elsewhere and have opposed policies and actions that contribute to violence in the Middle East. We have worked on the ground in Syria supporting those working to end the Syrian civil war.

What gives credibility to our work is our relationship with the communities with whom we partner and our consistent application of our guiding values.

Last summer I worked in Iraqi Kurdistan with the Mennonite Central Committee (MCC), a Mennonite relief, development and advocacy agency. They were responding directly to ISIS violence by aiding displaced victims. I marched with Iraqi Christians to denounce ISIS violence and demand UN action. At the same time, MCC colleagues in Washington, D.C., and at United Nations headquarters in New York were lobbying for policies that would reduce violence and protect the innocent. 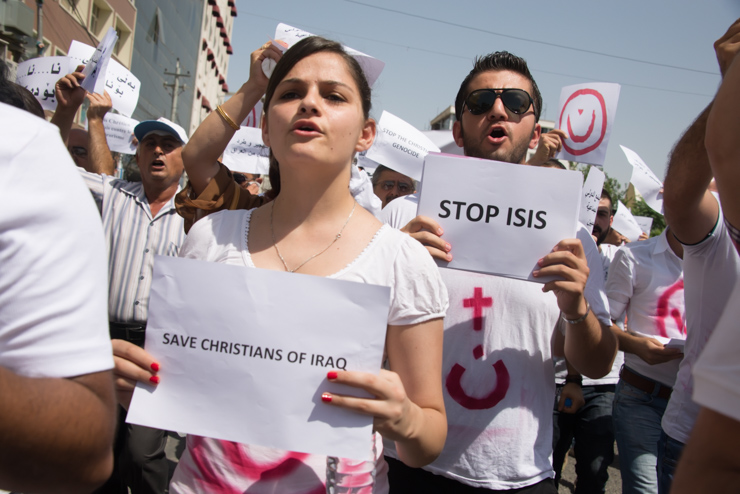 Israel and its supporters frequently boast of its humanitarian efforts in places like Nepal—as if to erase memories of the humanitarian disaster it continues to inflict on Gaza. At least the churches are being consistent in their global concern for peace and justice. Their activism on Israel and Palestine is the opposite of a double standard.

Those who make the “singling out” accusation apply a double standard of their own. They refuse to admit any wrongdoing while at the same time asking activists to refrain from a “consistent application of values” when it comes to Israel and its violations of human rights and international law.

Netanyahu demonstrates this kind of doublethink when in the same breath he can say: “We have done nothing wrong and we have not erred. We are not a perfect country; we do not pretend to be such, but they are setting standards for us that are both twisted and higher than those for any other country, any other democracy.”

All of these churches have taken consistent stands against a variety of human rights abusers for decades—with one of the most common targets being their own U.S. government over its wars and human rights violations.

For Angelica Harter, chair of the UCC Palestine Israel Network (UCC PIN), divestment is consistent with her decades of activism in the nuclear freeze movement, Central America solidarity, and work with refugees and immigrants before her first visit to Israel and Palestine in 2006.

“I was appalled that our tax dollars and diplomacy support a system which we Americans would never tolerate at home,” says Harter.

Those who ask why Israel is “singled out” must also ask why the U.S. government singles out Israel for the most foreign aid of any other country in the world. If you don’t have a problem with that special treatment—or even insist on it—then you cannot quibble with the increased scrutiny by U.S. taxpayers concerned about what is being done with the rifles carried by Israel soldiers stamped with “Property of U.S. Govt.” 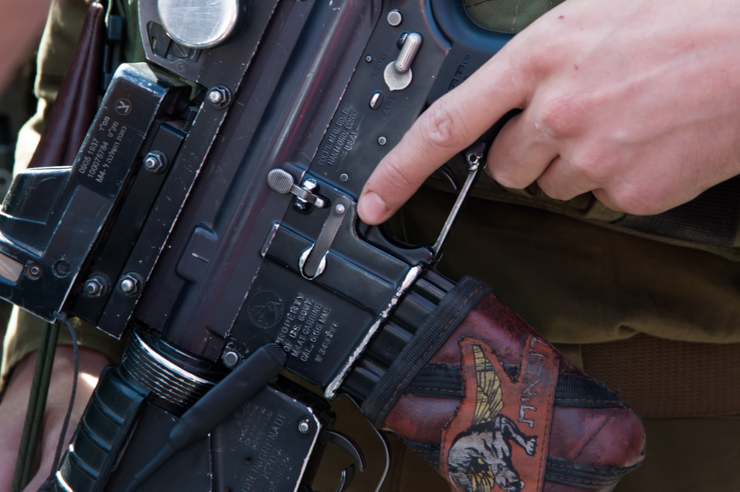 An Israeli soldier holds an M4 rifle stamped with ‘PROPERTY OF U.S. GOVT’ during a weekly demonstration against the occupation and Separation Wall in the West Bank village of Al Ma’sara, October 25, 2013. (photo: Ryan Rodrick Beiler/Activestills.org)

The same reasoning applies to purchases and divestments. Boycotts and divestments are attempts to put our money where our morals are—by withholding it from activities that violate our values.

“Our government ensures we do no harm to Israel, while there is no such care for Palestinians,” says Byler.

3. Listening to the oppressed while hearing all sides

It is not difficult to understand why Palestinian civil society would “single out” Israel when they initiated the BDS call in 2005. Churches later followed with their own call. The Kairos Palestine document, signed by some 3,000 Palestinian Christians—including the heads of 13 churches—urges: “boycott and disinvestment as tools of nonviolence for justice, peace and security for all.”

“BDS has many forms and nuances, and as part of Kairos I have had to struggle with many churches about positions that they would take at their assemblies,” says Nora Carmi of Jerusalem, project coordinator for Kairos Palestine. “Why did the document choose this as a nonviolent tool of putting pressure on Israel? Because when it was written back in 2009 we saw that political solutions were not being implemented.”

All of these church resolutions present their divestment efforts as a response to the Kairos call, though each engages it differently. Last year’s PCUSA resolution divested from U.S. companies Hewlett-Packard, Caterpillar, and Motorola, all of which supply equipment that the Israeli military uses in the West Bank and Gaza. This year, UCC PIN’s resolution names those three as well as international security firm G4S, which services Israeli prisons in the West Bank, and the French firm Veolia, which provides transportation to settlements.

Though no fewer than seven resolutions on Palestine and Israel will be considered by the Episcopal Church, the one promoted by EPF PIN calls for an incremental process by which companies involved in the occupation would be identified, engaged with, and only divested from if they refused to change course. Similarly, the MCUSA resolution does not name specific companies but defines a process for “withdrawing investments from corporations known to be profiting from the occupation and/or destruction of life and property in Israel-Palestine.” All of the resolutions call for settlement boycotts. None call for a boycott of Israel itself or businesses west of the Green Line. 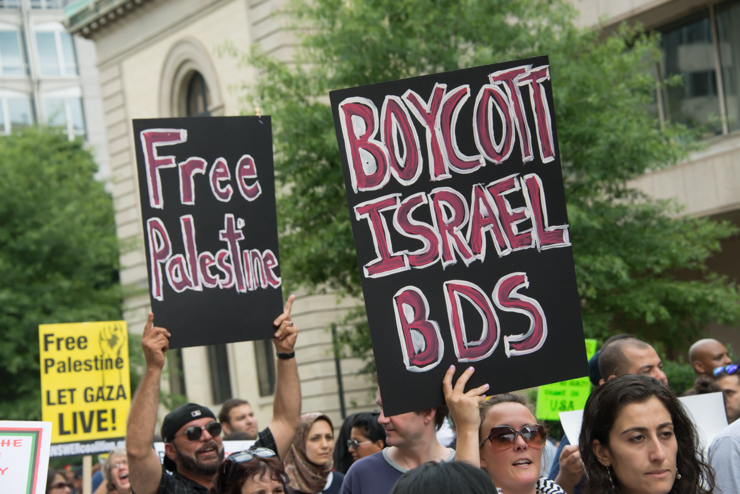 Resolutions from each church also contain various affirmations of “the right of Israel to exist,” confessions of “the long history of violence by Christians against Jews,” and commitments to “dialogue with major Jewish organizations.”

Despite such language, you can still count on these resolutions to be denounced as anti-Semitic. Similar acknowledgements in the PCUSA resolution did not prevent it from being slammed by major Jewish organizations as “one-sided,” “divisive,” and “demonizing.”

Fear of such accusations has meant that for many in the churches, “the justice or lack thereof in the policies of any Israeli government remain a secondary concern,” says According to Robert Trawick, communications chair of the PCUSA’s Israel/Palestine Mission Network.

According to Trawick, these “well-meaning liberals” are more afraid of being labeled anti-Semitic and therefore those “who oppose divestment at present would need to be given permission to change their minds” by mainstream Jewish leaders.

So far, that “permission” has only come from Jewish Voice for Peace (JVP), which has grown to more than 60 chapters over the past year as one of the few Jewish groups defending BDS activists from charges of anti-Semitism.

“Growth in JVP is a reflection of the failure of other Jewish institutions in the United States,” says Sydney Levy, JVP’s advocacy director. These institutions are “trying to sweep what is happening in Israel under the rug, trying to explain it—as if it’s explainable.”

“It’s not working anymore,” Levy states. “So you have more and more Jews who are looking for answers.” 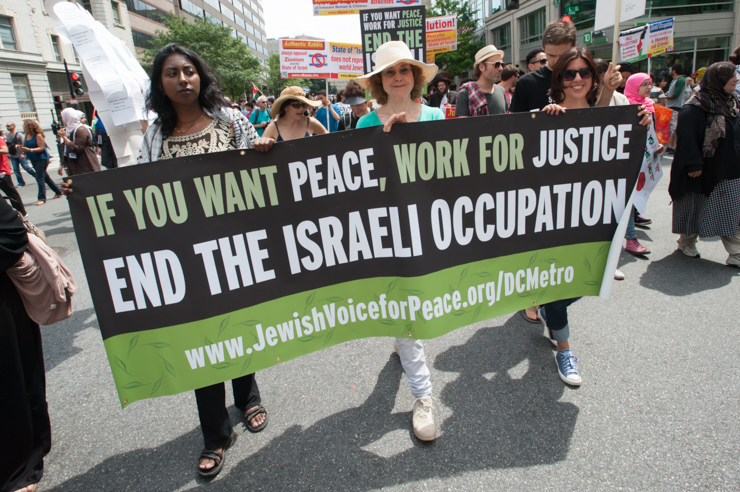 JVP’s Facebook “likes” have soared to more than 212,000—compared to 109,000 for AIPAC and 29,000 for J Street, both of which oppose BDS. Having been instrumental in supporting the PCUSA resolution, Levy and other JVP staff are attending the UCC and Episcopal conferences.

“We want the Jewish community at large to address this issue thinking about Israelis and Palestinians as human beings that are equally endowed with human rights,” added Levy, “and not only as a conversation about what is good for the Jews what is good for Israel.”

JVP’s Christian partners are praying that these shared values will drive support for church divestment resolutions in the debates to come—no matter what accusations are thrown at them.

“It is our relationships with both Israelis and Palestinians and our principled support for nonviolence that has led us to support BDS,” says Merryman-Lotze. “The well documented human rights abuses leading churches to support BDS is what should be the focus of any discussion of BDS, not horrific but unrelated violence in Syria.

According to Rifat Kassis, coordinator of Kairos Palestine, “While BDS may be hard for some foreign audiences to understand or adopt, it is the only methodology we see right now to bring about a just peace in a nonviolent way.”