Five members of the same family were killed in Yarmouk, along with at least seven other people. Despite the bloodshed, Jordan continues to refuse to allow Palestinians among the Syrian refugees it accepts. 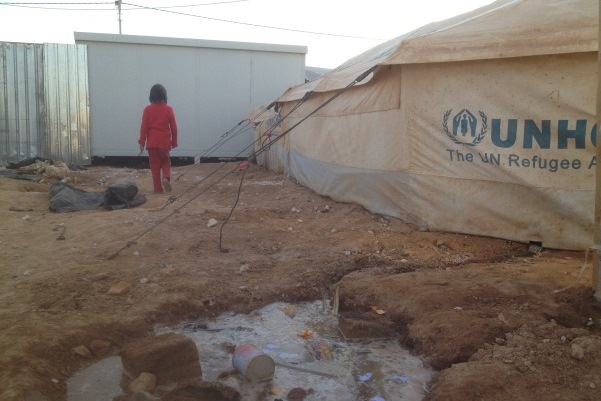 The United Nations Relief and Works Agency for Palestine Refugees in the Near East (UNRWA) issued a press release on Sunday expressing grave concern over the rising number of Palestinian casualties in the Syrian civil war. According to credible sources, an estimated total of 30 Palestinians were killed in the last week. Twelve of the casualties – including five members of the same family – were from Yarmouk refugee camp.

Ma’an News Agency reported that a high-level PLO delegation arrived in Syria today to discuss the situation of the Palestinians in the country. The delegation intends to talk to members of the Syrian regime and representatives from Palestinian refugee camps in Syria. Back in November, the PLO estimated the number of Palestinians who died in the war at 600, but since then there have been dozens more casualties. “The situation is so confused that it’s impossible to give a confirmed figure of casualties,” Christopher Gunness a spokesperson for UNRWA, told +972 today.

Half a million Palestinian refugees lived in Syria prior to the war. At least 20,000 Palestinians were able to flee the country to Lebanon, but the Jordanian government continues to send Palestinian refugees back, claiming that they are not affected by the conflict in the same way (the real reason probably has to do with Jordanian fears for the stability of the regime). In November, the Economist estimated that only 1,700 Palestinians were allowed by Jordan into the country. According to reports, there are no Palestinians in the Zaatari refugee camp, located in the north of Jordan.

A press release by UNRWA on Sunday stated that:

UNRWA deplores the unrelenting armed conflict in Syria and the extreme suffering it is inflicting on civilians, including Palestine refugees. In recent statements, the Agency has highlighted the crisis of large numbers compelled to leave the refugee camps in Rif Damascus to seek safety elsewhere, and the plight of those who remain in the camps. These Palestine refugees are unable to move safely, are subject to severe movement restrictions and face escalating threats from shelling and armed clashes. Poverty and deprivation are increasing in the Palestinian community, exacerbating vulnerabilities that existed prior to the Syria conflict, and lack of access to food and essential services continues to cause serious distress. These developments have left the Palestine refugee community, alongside their Syrian neighbours, profoundly traumatized and fearful of the future.

The UN estimates that about 5,000 people are fleeing Syria every day. Since the conflict began, 787,000 people were registered as refugees by the UN High Commissioner for Refugees, and the Palestinians are at high risk in this conflict due to their special position in the region. “Refugees by their nature are already among the most vulnerable people in any society,” says Mr. Gunness, “and in a situation like in Syria clearly they are more vulnerable.”