The organization’s face has changed significantly since 1964, most dramatically in the past 20 years since Oslo. The PLO must find a way to include the diaspora, empower grass roots activism and keep alive its founding spirit as a national liberation movement.

Take one look at the website of the Palestine Poster Project, and you’ll get a glimpse of another era, when the iconography of the Palestinian struggle came in bold hues attached to even bolder slogans.

Among the collection is a gold-tinted composition by the renowned Palestinian artist and art historian Kamal Boullata. The caption is a quote from none other than Che Guevara: 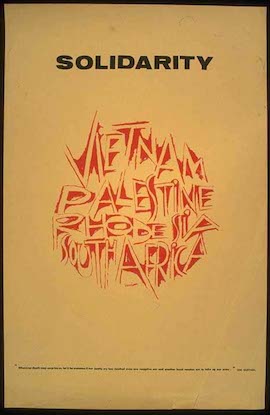 “Wherever death may surprise us, let it be welcome if our battle cry has reached even one receptive ear and another hand reaches out to take up our arms.”

That was 1969, and the Palestinians’ institutionalized struggle—insofar as it coalesced around the Palestine Liberation Organization—was barely five years old. In such a short time, the Palestinians had succeeded in making their cause an international one, celebrated among the non-aligned countries of the Cold War and memorialized in the languages and slogans of anti-imperialist movements worldwide.

That was then. More than four decades later, on the fiftieth anniversary of the PLO, the organization once entrusted with sustaining the Palestinian struggle—and broadening both its financial and moral support base—is virtually unrecognizable. Where once it boasted a vibrant national council drawing from within historic Palestine and the diaspora—among whose luminaries were intellectual powerhouses like the late Edward Said—it is today but a backdrop to the Palestinian Authority, rubber-stamping the stateless government, whose president is also the PLO chairman.

If that sounds confusing, it is.

Like any nationalist liberation movement, the PLO was forged from chaos. And the Palestinians’ was no ordinary catastrophe: Israel and the Zionist militias that predated it displaced the majority of historic Palestine’s population—as shown in a series of maps, described here, by Salman Abu Sitta—and all with the express sanction of the world’s great powers. With no army, no currency, and no recourse in the newly formed post-war order, it’s little wonder that it took 16 years for the stateless Palestinians to come together under a single banner.

That they did is a testament to their resilience. But with the 1993 launch of the U.S.-backed Oslo negotiating process and the subsequent formation of the Palestinian Authority, what was once a nationalist movement became a government-in-name-only, trading liberation for the politics of incrementalism. The Palestinian right of return, for example, was gradually subsumed by so-called “redeployments,” which gave the Palestinians “authority” over civil services—like trash collection and school administration—while limiting that authority to non-contiguous enclaves subject to military incursions at Israel’s whim.

Two decades in, this is by now an old story. Still, it’s important to remember that the Oslo era, now representing fully two-fifths of the PLO’s history, also sounded the death knell of that once-vibrant liberation movement. In its place is a bloated kleptocracy, kept afloat by foreign aid and retarded by an ongoing Israeli occupation.

What, then, are we to make of recent pronouncements—recent, perhaps, only to those who haven’t been paying attention—that Oslo is dead? If the framework that created the Palestinian Authority has indeed come tumbling down, can we expect the same of the PA itself? And, if so, what will take its place?

Many have called for a rejuvenation of the PLO, a prospect recently buoyed by the reconciliation agreement between Fatah and Hamas, which includes a call for PLO-level elections, ostensibly by year’s end. But even if these elections do to take place as planned, key questions remain unanswered. Among these are how to enfranchise the worldwide Palestinian diaspora.

At the very least, the modalities of such an election should be made public and transparent, with enough lead time to allow a new generation of leaders—most of whom have cut their political teeth in the era of an emasculated PLO—to consider whether running would be worth their while. Many of the finest will likely (and justifiably) balk at the idea, preferring to continue pushing the movement at the grassroots.

That, ultimately, may be more effective, too. After all, Palestinian activists and their supporters—not the PLO—have been behind the extraordinary growth of, say, the BDS movement or the so-far successful calls to exclude Israel from a U.S. visa waiver program.

But if the PLO’s early history is any guide, grassroots activism need not be contrary to the organization’s agenda. At the very least, a 21st century PLO can do its part to support, not hinder, activists on the front lines. After all, through their insistence upon justice, upon liberation over adjudication, they have kept alive the founding spirit of the Palestinian national movement.

More on 50 years of the PLO:
How three Israeli journalists brought Arafat into Israeli homes

Samer Badawi is a freelance writer based in Washington, DC. He is the former DC correspondent for Middle East International.