Palestinian Christians are no different than other Palestinians. We all suffer the same. 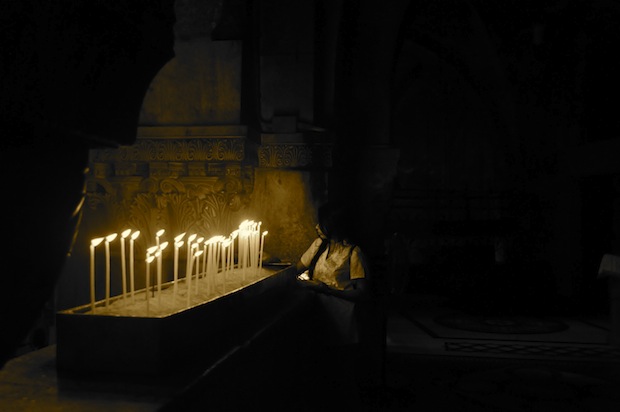 There have already been a number of articles written in response to CBS’s 60 Minutes report about Christians in the Holy Land. The sexy story in all this appears to be Michael Oren’s interview with Bob Simon of 60 Minutes, and the attempt by Israel, its embassy in the United States and syndicate of lobbying groups to prevent the report in some capacity from airing.

The real story told in this piece has been to some degree overshadowed by the Michael Oren story, but also lacks appeal because it does not ultimately stray too far from the accepted argument about why Palestinian Christians are leaving the Holy Land—only enough to make the Israeli government sweat and overreact in characteristic fashion.

While the report makes some good points and does counter the argument that Palestinian Christians are fleeing solely as a response to Muslim fanaticism and persecution, I still feel that the overall message of this piece is that Palestinian Christendom is being squeezed out of Palestine because of a religious conflict between Jews and Muslims—which is altogether false.

The piece does not properly identify Christians as a seamless part of the Palestinian population, which faces persecution from Israel without prejudice to religion—rather Christians are portrayed as the “collateral damage” of this inter-religious conflict between Muslims and Jews.

Contrary to this portrayal, Palestinian Christians are an integral part of the Palestinian people and have been at the forefront of the movement for national liberation. From the earliest days until now, Palestinian Christians have comprised many of Palestinian nationalism’s intellectual pioneers, advocates and political leaders—not the hapless minority caught up in a struggle in which they have no part, as this piece portrays them as being.

Taking a closer look at the meat and bones of Bob Simon’s report, we see that even though every Palestinian Christians interviewed in the piece point to Israeli occupation and not Islamic extremism as the root of the exodus, Simon still insists on drawing the conclusion that Islam is at play in the flight of Christians.

Truly there are historical tensions between religious communities in Palestine, as there are in countries throughout the world. Some of the worst of these tensions are actually between different Christian denominations inside Jerusalem. But the true culprit in this tragic phenomenon that is emptying the birthplace of Christianity from its indigenous adherents is a political battle being waged on all Palestinians alike, irrespective of religion.

Both Palestinian Muslims and Christians must go through the same arduous procedures to obtain permits to visit their holy sites in Jerusalem. Both suffer the endless growth of Jewish settlements, home evictions and demolitions, mass imprisonment, the circuitous route of the wall and the daily torment of living under occupation–not to mention the Nakba.

Yet Simon continues to frame the Christians as “squeezed between a growing Muslim majority and Israeli settlements.”

Even those elements of the occupation that put pressure on Christians to leave the country, such as the separation barrier, are portrayed as byproducts of that conflict and an outcome of Israel’s need to protect its citizens from Islamic terrorism.

Juxtaposed with Ambassador Oren’s statement that although the checkpoints are inconvenient for Palestinians, Israel needs to do what it must to survive (“it’s their inconvenience, it’s our survival”)—Simon posits the endangering of Palestinian Christian culture, the threat to which is the growing Muslim majority. “The veil is replacing the cross,” he narrates ironically as a Christian nun with a veil walks by in the following shot. In other words, while Israelis face a threat to their livelihood, Palestinian Christians face a threat to their culture brought on by the Muslim majority, as if it is Israelis that have the exponentially higher death toll as a result of this conflict and not Palestinians.

It is difficult to understand where Bob Simon gets his conclusion, given that every one he interviews except for Ari Shavit (and obviously Michael Oren), would counter this claim. Yet even Sharit’s second comment to Simon says, “Israel is not persecuting Christians as Christians. The Christians in the Holy Land suffer from Israeli policies that are a result of the overall tragic situation.”

Palestinians of all stripes face the Israeli occupation and colonial enterprise together. Some are leaving. Others remain steadfast.