The data, obtained for the years 2011-2015, paints an even more grim picture of discrimination, especially in the arrests of minors, for crimes like ‘incitement,’ and predictably, for ‘security offenses.’ Ayman Odeh: Data reveals deeply ingrained racism in the police. 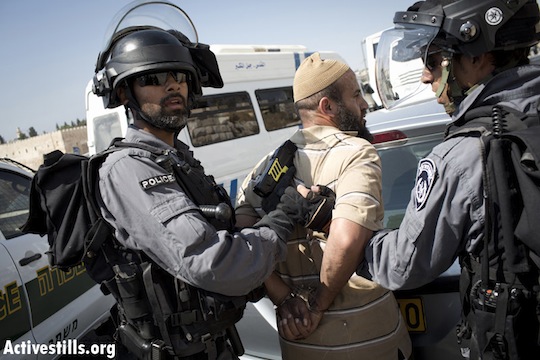 Non-Jews comprise a mere 25 percent of Israel’s population, yet 60 percent of all people arrested by Israeli police between the years of 2011 and 2015 were non-Jewish, according to data obtained by +972 and its Hebrew-language sister site, Local Call. When it comes to the arrest of minors, the picture is even worse.

Police provided the data in response to a freedom of information request by the Movement for Freedom of Information and is being published here for the first time. It includes data about the total number of arrests, the number of those arrests which led to indictments, the suspected crime that prompted the arrests, the religion of the arrestees (Jew or non-Jew), and the age of the arrestees (adult or minor).

Israel Police arrested a total of 295,654 people over the five-year period, over 60 percent of whom were classified as non-Jewish.

According to data published by Israel’ Central Bureau of Statistics this month, 74.8 percent of the country’s population is classified as Jewish. In addition to the 20.8 percent Arab minority of Israeli citizens, however, “non-Jews” could also include tourists, foreign workers, Palestinians from the West Bank, and others. Israeli police are also involved in criminal arrests of Palestinians in the West Bank at times, and the distinction between Jews and non-Jews in the data police provided could include Palestinians.

While one might be tempted to point to issues of state security to explain the serious disparity between Jews and non-Jews (non-Jews are arrested at far higher rates for security offenses), only 12 percent of arrests were for crimes classified as security offenses, with Jews comprising part of that 12 percent. Those security offenses, which range from weapons charges to treason and espionage to flying a Palestinian flag to throwing stones, cannot account for the disparity.

More so, even in categories of crimes that Jews account for a higher raw number of arrests than non-Jews — 65 percent of sex crimes; 63 percent of “crimes against morality” (pimping, drug use and distribution, publishing certain lewd materials), 53 percent of bodily offenses – the representation of Jews is still far lower than national demographic proportions. 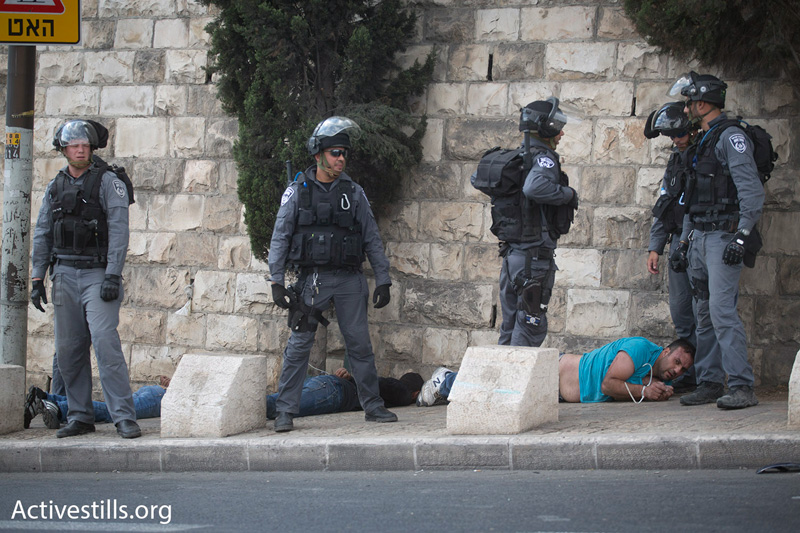 With an average of over 160 arrests a day, it is worrying to see powers meant for maintaining public order used so discriminatorily against one segment of the population.

Knesset members from the Joint List have already said they plan to raise the matter of discriminatory policing against the Palestinian minority in Israel in the Knesset’s Internal Affairs Committee.

Chairman of the Joint List, Ayman Odeh, responded to the data by saying it “reveals a reality we know all too well of racism and discrimination, which unfortunately is deeply ingrained in the ranks of the police.”

“While there is a grave and urgent need for law enforcement relating to crime affecting the Arab public,” Odeh continued, “the only way to create meaningful change is if the police start seeing us as citizens worth protecting and not as enemies to distinguish and persecute.”

Civil rights organization “Adalah — The Legal Center for Arab Minority Rights in Israel” responded: “The numbers prove that Israel Police is a racist body. The policy of profiling Arab citizens results in officers singling out Arab passersby as suspects, which ultimately leads to violence and arrests. Additionally, Israel Police takes specific steps exclusively against Arab citizens like preventative arrests, the arrest of minors during nighttime hours, summonses for interrogation that lead to arrests, and more.”

“In addition, the Department of Internal Police Investigations (Internal Affairs), which is supposed to be the body that acts against police violence, as well as against false arrests, does not conduct basic and professional investigations into complaints filed in the name of citizens,” the Adalah statement continued. “The Department of Internal Police Investigations actually represents a green light for racist and violent police practices.”

A spokesperson for Israel Police responded with the following:

In accordance with the Israel Police’s duty to uncover and investigate crimes and criminals, police carry out enforcement activities, including arrests, under the powers conferred upon it by law, and the grounds for arrest, as prescribed by law are in no way related to the identity of a person or his ethnicity. We emphasize that the decision to keep somebody in custody is made by a court of law, after it reviews the investigative materials in the case.