Over 70 percent of Israelis are worried about international isolation. Half believe settlements strengthen Israeli security and over half support a breakthrough vision for resolving the Israeli-Palestinian conflict – roughly the same rate of support for the traditional two-state paradigm. But one-quarter support an apartheid vision for the future. Half the population supports anchoring Jewish identity in law – but over half either oppose doing so or have no opinion. Fully three-quarters support President Rivlin’s conciliatory approach and criticism of the government.

The contradictions and convictions of Israelis at the end of 2014, and the beginning of the election cycle, in a special +972 Magazine poll. Information about the poll is found at the end.

The conflict: Status quo out, apartheid up, new paradigms in?

+972 Magazine’s survey indicates a sea change in consciousness inside Israel, and a dawning realization that things cannot go on as they are. Ninety percent of the respondents reject the option of continuing the status quo on the conflict.

Roughly since the construction of the separation barrier in the mid-2000s, the notion of a sustainable status quo settled into mainstream Israeli thinking and has held for nearly a decade. Resolving the Israeli-Palestinian conflict was low on the list of priorities in Israeli survey research.

Since the outbreak of Operation Protective Edge, I have often been asked whether the war would shatter support for the status quo. Until now, there has been no consistent empirical evidence that it has.

We asked people about their preferred general vision for the future of the conflict and gave four options: “Thinking about the Israeli-Palestinian conflict, which of the following options do you prefer?” 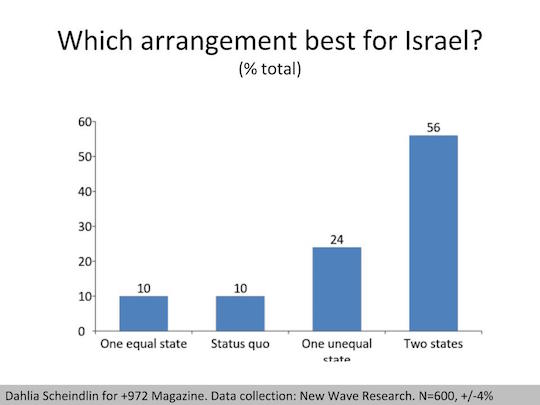 We now know that 90 percent of Israeli respondents favor something other than the status quo. But in the next graph, this data can also be compared to the polls marked * which were conducted by the organization Blue and White Future with an identical sample for the Jewish respondents and very similar question wording. Note the major changes:

• Support for a status quo is falling steadily – a process that actually happened between 2012 and 2013; our current survey confirms a real trend.

• There is no statistical change in support for an equal one-state solution.

• Instead, there is significantly rising support for one, unequal state. Perhaps if the word “apartheid” had been added, political correctness would dampen the numbers, but this reflects a real trend. 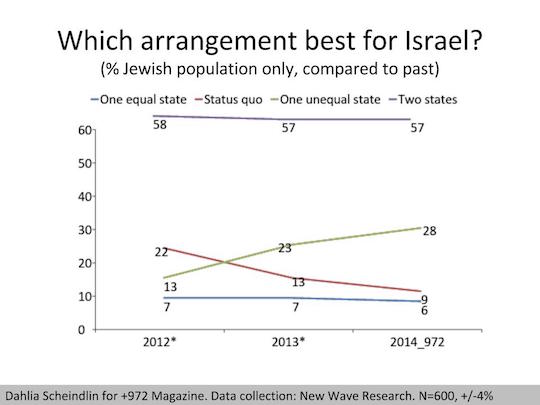 The worrying rise in support for an unjust situation of permanent inequality is offset by a particularly interesting set of questions we asked, together with the Israel-Palestine Creative Regional Initiatives (IPCRI). For over a year, IPCRI has led a series of working groups looking at a confederate-style model known as “two states, one space.” (Proper disclosure – I am on the steering committee of this initiative as part of my search for alternatives given that circumstances are less and less conducive to the two-state solution.)

The initiative attempts to break through some conundrums such as Palestinian right of return (which Jewish Israelis reject), and a continued settler presence in the West Bank (which Palestinians reject). It is new and different and probably controversial.

The findings were surprising on various levels, in terms of which pieces were acceptable and levels of support for the general vision. These will be the subject of a separate and detailed post in a few days. Keep your eyes on this spot.

Settlements are not security

There is a range of polling testing whether Israelis support expanding or dismantling or freezing settlements and where. A few weeks ago, a poll I conducted for J Street found a 52-percent majority opposed to settlement expansion.

But the government regularly argues that settlements are a matter of security, and justifies financial support based on security. The theme seeps into the public discourse.

Do Israelis believe that settlements contribute to the security of the state? Or does anyone feel they may be a security liability? We asked: “Do you think settlements strengthen or harm Israel’s security?”

The Israeli public is divided clean in half – 45 percent for “strengthens” to 46 percent for “harms” – a statistical tie.

• The ideological splits are dramatic: Among the Right, fully three-quarters believe settlements strengthen security, although 15 percent say they weaken it. Among the center, a clear 55-percent majority says they weaken security.

This pattern shows the long established observation that the center is much more like the Left than the Right, and substantial majorities of centrists think like the Left.

But another interesting finding is that the normal split in political attitudes based on level of religious observance among the Jewish population is particularly dramatic. Religious (not ultra-Orthodox) and traditional groups – together, a bit less than  one-third of all Israelis – are in fact the only ones who show strong support for this belief. That’s another example of the minority determining policy for the majority who are opposed to it. 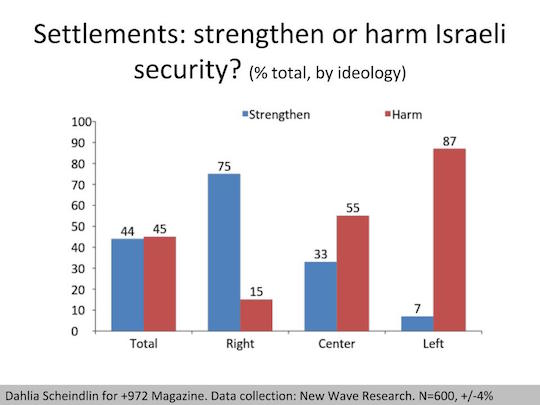 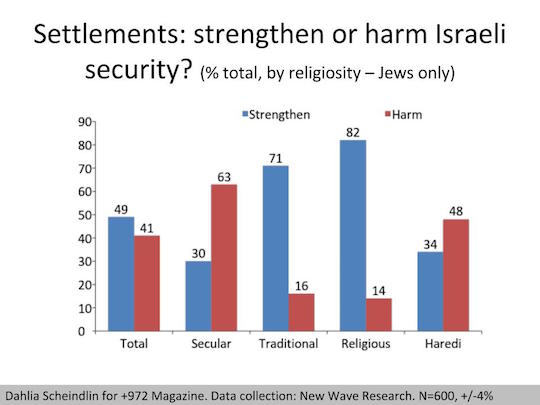 Although the Jewish Nation-State law is frozen for the moment and it is unclear what its fate will be after the election, the debate over the law exposed deep fissures within Israeli and Jewish society in Israel. It drove a wedge between center from the Right and precipitated the collapse of the government. The survey shows division and some confusion among the public as well.

We asked: Do you think that Jewish identity needs to be anchored into a Basic law in Israel, as recently discussed? This question was asked only of Jews instead of asking Arabs a question with a predictable response.

Nearly half of the Jewish respondents, 48 percent, felt Jewish identity ought to be formally enshrined in Israeli law.

However, 38 percent said it did not need to be made into a law, and another 14 percent didn’t know. That’s actually a very slight majority – 52 percent – who do not obviously support the law.

Further, among those who support it, we asked what the main reason was, and gave three options. The clear plurality (43 percent) said the law was important mainly to protect Jewish cultural heritage from assimilation. Interestingly, even those who don’t support the law thought that if they had to choose one reason to support it, about 20 percent cited the need to ensure Israel remains a safe haven for world Jewry, higher than among those who support the law. 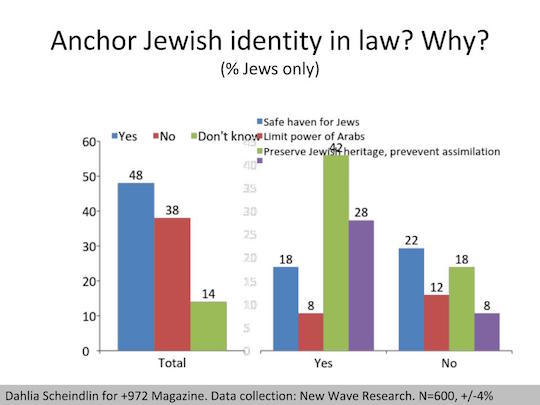 In recent months it is a rare day without a headline discussing Israel’s worsening situation vis-à-vis the international community. Other surveys of mine show that over 60 percent of Israelis believe the U.S.-Israel relationship is in a crisis, and over 60 percent blame the prime minister for making those relationships worse.

During the week of this survey, Palestinians submitted a bid to the UN Security Council to set a date for ending the occupation and the EU Parliament voted to recognize a Palestinian state. In recent weeks, individual European parliaments have voted similarly and Sweden’s government actually recognized Palestine.

But how much do Israelis care?

We asked: When you think about the negative attitudes toward Israel in Europe and the crisis in relations with the U.S., are you worried about international isolation, or not worried?

• The self-defined center and the left are very similar – approximately 80 percent are worried.

• The high overall total stretches to the right as well: nearly two-thirds of self-identified right-wingers say they are worried (63 percent).

The government, the president and two different countries

Judging by legislation, bills, wars and incitement, the current government rivals only the previous Netanyahu government as the most extreme right-wing leadership in Israel’s history. But most of Israeli society doesn’t think so: When asked, “how would you characterize this government,” and offered choices from far right to far left, just one-quarter (23 percent) view the government as extreme right, and only 14 percent among Jews.

• Among Arabs, 69 percent feel the government is extreme right and 81 percent say it is right wing in general.

• Among the center and Left, 79 percent and 94 percent, respectively, say the government is right wing in general.

Fifty-five percent of the Left believes the government to be extreme right, but only 37 percent of potential Labor/Hatnua voters think so. 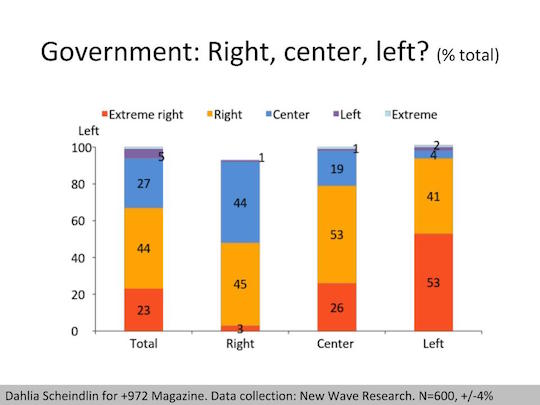 Still, it is safe to assume that the wide portions of the center and Left who characterize the government as right wing in general are not happy about it, and this, along with anger against the government for general incompetence, is driving the sense of change in the air as elections approach.

Although only one-quarter feel the government is actually extremist, a strong portion support the conciliatory approach that President Reuven Rivlin has come to symbolize.

We asked: “Lately, President Reuven Rivlin has focused on bringing Jews and Arabs closer together. He has acknowledged the travesties against Arabs in the past and has spoken out against those who incite among Jews and Arabs, including criticizing the government. In general, do you support or oppose the President’s position?”

• Not only do 85 percent of Arabs – essentially a consensus – support his position, but also a healthy 60-percent majority of Jews.

• However, the Jewish result hides a deep division: among the Right, just over one-third supports this position and fully 64 percent oppose the president’s attempts at conciliation between the various populations of Israel.

• On the other hand, the 35 percent of the Right who support the president indicates that there remains a core of pragmatic right-wingers committed to a more balanced approach in Israeli society.

The president’s approach comes none too soon. A single question highlights the reality of two parallel Israels:

There are complex attitudes that characterize those who experience discrimination – these too will be the subject of future posts.

From the data, Israeli society is gathering itself into two fundamentally different camps. Overall, there is a grand rift between those who seek a deeper commitment to democracy, equality and navigating away from further conflict escalation through new solutions. The chasm between secular and religious worldviews create an ever-widening gap between left and center as a unit, and the Right, although there continues to be a distinction between pragmatic and far right. While the vision of the center and left camp might be coalescing as the opposition parties show their messages, it is not clear how far the polarization may yet go.

A second axis is the completely different experience and worldview held by Arabs compared to Jews. Israel has not managed to create an overall civic identity or include its Arab citizens in the common national experience.

To paraphrase Massimo d’Azeglio, we have created Israel – that is indisputable. But there is a very long way to go before we can say we have created a family that includes all Israelis.