Edward Snowden’s disclosures exposing the extent of NSA surveillance taught us more about our relationship with government than any other exposure or event. In fact, we learned about relationships we didn’t even know we had. But the Snowden leaks didn’t just change what we know; they sparked a discussion that could very well change the dynamics of power in the coming age.

As in years past, the person of the year for 2013 was chosen by +972’s bloggers and editors. This, however, is the first time we chose someone not directly related to Israel/Palestine, making Snowden a slightly controversial choice among the site’s members. 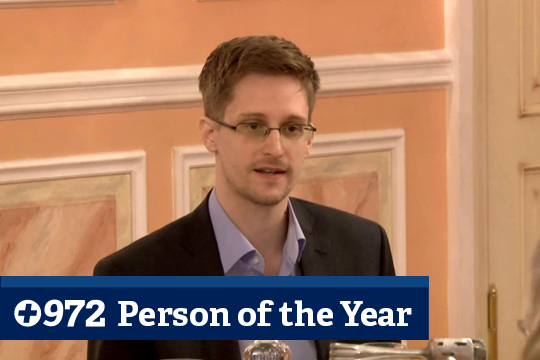 The technological revolution represents the most significant change of our lifetime. The Internet has changed everything: our behavior, our ethics, our economy and even our sex lives. But it is politics, not the music industry, where the most profound changes have taken place. Political participation today starts on the Internet and only later moves to the street, workplaces and polling booths.

Israel’s social justice movement – the largest mass protest the country has ever seen – was organized on Facebook. Social media changed the Palestinian national struggle forever: it brought together displaced communities and shed light on grassroots struggles. If it wasn’t for social media, few would have learned of places like Nabi Saleh and Bil’in. The mainstream media never took interest in Palestinian grassroots leaders – only when they were labeled terrorists did they become worthy of attention – but social media has changed that too.

As journalists, we are experiencing firsthand how the Internet has altered our profession, putting some of us out of work while creating new opportunities for others, ones that we couldn’t have imagined a decade ago. A project like +972 Magazine could not have existed without the platforms provided by WordPress and Google, Facebook and Twitter.

But as much as we are aware of the significance of these massive changes, the small amount of attention we pay to the battle over the Internet is astonishing. Until we are faced with a specific problem – a website crashing, a webpage removed, a Facebook account hacked – we tend to take it all for granted.

Rather, we used to tend to take things for granted. That is, until a soft-spoken, geeky-looking computer specialist showed us how fragile the new freedoms provided by technology are and the degree to which the virtual universe is exposed to manipulation and abuse. He showed us how underdeveloped our thinking is on privacy and political participation in this virtual space. He showed us just how exposed we are in the face of power in this virtual world – more than we could have ever imagined, let alone agreed to, in our more physical existence.

This is the context in which Edward Snowden’s act needs to be understood. One had to have been especially naïve to think that the U.S. government was not spying on the German chancellor or the Israeli prime minister, as Snowden’s documents revealed. The more tech-savvy among us knew well that digital communications are traceable, though few ever imagined the scope of the NSA’s surveillance programs. But the story is not just your email, or the records of your phone calls stored on NSA servers and maybe shared with your own government. The issue at hand is the Internet, and what it will become: a force of freedom or the perfect machine for surveillance and control.

In recent years, governments and corporations have begun to understand the threat – but also the potential – in the Internet and began acting accordingly. They soon discovered that today’s technology gives them the capabilities to do something the worst tyrants of yesteryear could only dream of: the ability to trace every person, to monitor his or her contacts, to survey his actions and even to understand what’s on his or her mind.

Legislators and governments also have taken greater interest in supervising the content of the Internet, manipulating web platforms and attempting to contain the web as a potential threat to their monopolies on power. While public attention was given to the blunter, old-fashioned web-censorship attempts in places like China and Iran, a more sophisticated effort was taking place in the West. As the Snowden documents revealed, the NSA and its worldwide partners had a goal in mind that is both simple and astonishing: to intercept, analyze and store as much human communication as possible. The scope of the operation was matched only by its secrecy.

Once the information is there, on the government’s servers, using it becomes a matter of decision. It doesn’t happen overnight – though NSA staff’s use of the agency’s capabilities to spy on spouses and ex-lovers already hints at where we are headed – and it doesn’t happen at once. But ultimately, the temptation to use this power against political rivals, journalists, fringe groups, dissidents and activists becomes too big. Unchecked power is always abused.

Social responsibility in the private sector

Government is not the only problem. Among other things, Edward Snowden revealed the degree to which technology corporations played along with and even advanced these trends. Left alone, powerful institutions tend to cooperate with each other, and today Facebook or Google are at least as powerful as medium-sized nation-states. Since Google has access to much of the public and private information on the web, it has the capacity to hurt almost anyone that might threaten its interests; the same goes for many other companies. Have we given enough thought to the way such corporations treat the information they store for us?

Consider this. It can be safely assumed that at least some people from the large technology companies knew about the U.S. government’s data-mining – certainly about the information their own companies were ordered to hand over. Though FISA courts and the Patriot Act prevented the companies from exposing their cooperation with the surveillance programs, individuals could have acted on their own. The fact that the world had to learn about this issue from a government contractor says something about just how much the organizational cultures in those corporations are indifferent to the deeper issues of public responsibility and accountability. Government agencies, even in their darker hours, still hold in their culture a certain ethos of democracy and public service. Information and technology corporations have yet to develop those moral principles.

This month, 15 of the biggest technology companies demanded the White House conduct “aggressive” reforms of the NSA in light of the new revelations. Edward Snowden, singlehandedly, was able to change the way those companies understood their commitment to the people who use their services. Suddenly, they are making the protection of their users’ privacy their business.

Much like technology itself, which managed to sneak into our world and change it – and us – before most of us noticed, it’s hard to illustrate the revolutionary force Edward Snowden unleashed by simply examining single documents or programs that he revealed. Taken individually, any of his revelations might be too abstract for anyone to feel that it has, or could have, a real impact on his or her life; taken together, they shook our world. Sometimes you just can’t see the forest for the trees.

After several years in which the trend on the Internet was toward greater control and supervision, we are now witnessing serious mainstream thinking about online freedom and privacy. Legislators are discussing more checks on their security agencies. Companies are viewing the government with suspicion (which is the only way to view governments). These are only first steps, but the tide has clearly turned. None of this could have been imagined just six months ago. In 2013, Edward Snowden changed our world.

Temporary refuge and an uncertain future 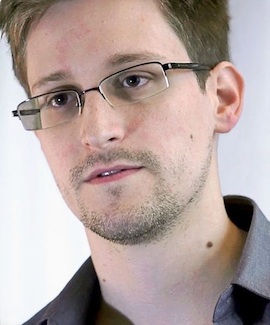 At the age of 30, Edward Joseph Snowden was already the most wanted man in the world. The headache he caused all Western surveillance agencies was demonstrated when European countries, suspecting that the NSA whistleblower was on board, forced the Bolivian president’s plane to land in Vienna and Austrian policeman rushed to search for him in its cabin.

Like all whistleblowers, Snowden was labeled a traitor, a narcissist, a spy, the product of an ego-driven generation and much, much more. Yet by now, even some of the people who denounced Snowden are admitting they were wrong. It is clear that the information Edward Snowden provided is of critical importance to the public. And despite warnings from the corridors of power, it is less useful for secret services or underground cells around the world, who in all likelihood already suspected that they were the targets of American intelligence collection efforts.

Even Snowden’s critics must now recognize the responsibility with which he acted, making every effort not to risk lives and not going a single step further than presenting the public with information that could allow it to make its own, informed decisions. He could have tried to sabotage the NSA programs. He could have tried to turn a profit from his unique knowledge. He could have at least tried to keep his identity secret. Snowden did none of that. Instead, he traded a comfortable life in Hawaii for temporary refuge in Moscow and an uncertain future, for no personal gain whatsoever. Yes, he became a household name, but would any one of us want to put ourselves in his shoes?

There is something else to Snowden beside his noble motivation and the admirable way in which he acted. By the time Snowden approached journalists Glenn Greenwald and Laura Poitras, there was no denying the risks he was about to take. The fate of other whistleblowers – first and foremost, Chelsea (then Bradley) Manning – was known. Snowden must have known that by the end of 2013, he could have been serving the first months of a long prison term. With so many powerful organizations so angry with him, this might have been the easiest of punishments he could have endured.

It’s not only that Snowden wasn’t deterred by the mistreatment of Chelsea Manning, as Glenn Greenwald explained, it actually inspired him. Yet he didn’t plan on going down like Manning and other whistle blowers. He carefully panned his moves, and while some things were beyond his control – like the ability to receive asylum in another country – he did all he could to control his fate, and to guarantee the flow of information he obtained, even if he was to disappear. For now, his plan has worked perfectly. Snowden kept some of his freedom, but more importantly, he continued to control the story. He took on the most powerful of adversaries, and won. In the fight to place checks on power, there are plenty of martyrs. In Edward Snowden, the world found a hero.