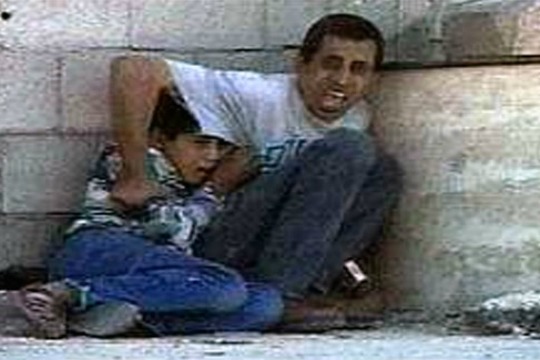 This article was originally published in October 2010. I am republishing it following the Israeli government’s publication of its definitive report on the incident, in which it absolves the army of responsibility for the boy’s death. I’ve added two new paragraphs at the end.

In September 2000, on the second day of the Second Intifada, a 12 year-old Palestinian boy named Muhammad al-Dura was shot and killed during an exchange of gunfire between Israeli and Palestinian forces in Gaza. Several other Palestinian children were killed by gunfire that day, and hundreds more in the months and years since, but only the name and image of Muhammad al-Dura have become iconic, because only he died in front of a television camera, in his father’s arms. Today, there are streets and monuments named for him around the Arab world.

According to the unusually well-written Wikipedia entry on the Muhammad al-Dura incident,

…the footage of the father and son acquired what one writer called the power of a battle flag. For the Palestinians, it confirmed their view of the apparently limitless nature of Israel’s brutality toward them, while for sections of the Israeli and Jewish communities the allegations were a modern blood libel, the ancient antisemitic association of Jews with child sacrifice.

The boy’s death was filmed by Talal Abu Rahma, a Palestinian cameraman who freelanced for France 2. Charles Enderlin, Jerusalem bureau chief of France 2, narrated a 1-minute edited clip of the footage, in which he stated that Muhammad al-Dura died after he and his father were targeted from Israeli positions. And thus Enderlin’s troubles began.

For the following decade, the veteran French-Israeli journalist came under attack from several directions — primarily from Jewish community organizations and bloggers in France and the US. Enderlin’s attackers claimed that he had no way of knowing that al-Dura died from Israeli gunfire, since he was not present when the incident took place. Critics scrutinized the footage, frame-by-frame, magnifying every possible inconsistency. Enderlin received death threats. Lawyers for the settlement movement went to court in an attempt to have Enderlin stripped of his Israeli press credentials. One prominent French-Jewish blogger wrote that Enderlin had created a hoax.

The al-Dura footage became Exhibit A in what the conspiracy theorists call Pallywood – i.e, news coverage that is allegedly manipulated or staged in order to advance the Palestinian cause at the expense of Israel.

Even those who eschew conspiracy theories were influenced by James Fallows’ 2003 article for The Atlantic. Fallows interviewed several Israeli experts and concluded there was no way of proving that Muhammad Al-Dura died from Israeli bullets. Writes Fallows:

Whatever happened to him, he was not shot by the Israeli soldiers who were known to be involved in the day’s fighting—or so I am convinced, after spending a week in Israel talking with those examining the case. The exculpatory evidence comes not from government or military officials in Israel, who have an obvious interest in claiming that their soldiers weren’t responsible, but from other sources…The research has been done by a variety of academics, ex-soldiers, and Web-loggers who have become obsessed with the case, and the evidence can be cross-checked.

In the grand clash of narratives, the fact that Muhammad al-Dura had been killed came to seem less important than determining the provenance of the bullet that killed him.

In an article about the book for French website Rue89, Pierre Haski, who was Jerusalem correspondent for Libération during the 1990s, writes that he came to know Enderlin in Israel and describes him as ‘an excellent journalist’ who has written some important books about the Israeli-Palestinian conflict. (the Rue89 page includes a video, embedded below, showing Enderlin’s original television report about the death of al-Dura).

Haski also notes that Enderlin has, ironically, come under attack from colleagues who accused him of pro-Israel bias because he continued to serve his annual reserve duty in the IDF, as Israeli citizens are required to do (Enderlin, who is Jewish, became an Israeli citizen in the early 1970s), even as he covered Palestinian affairs for his French employer.

To mark the publication of Un Enfant est Mort, Annette Young of France 24’s English language broadcast, who was previously the news station’s correspondent in Jerusalem, interviewed Enderlin in the Paris studio. I think it’s a fascinating interview — unusually long and thoughtful — that makes some important points and provides some valuable insight. Amongst the questions Enderlin responds to: How can a journalist vouch for the authenticity of footage that was shot when he was not present? How did the controversy affect Enderlin’s career?; Does he think that his being Jewish made the controversy worse?; Did he or does he ever think of leaving Israel as a result of the fallout following the al-Dura incident?; And what role did bloggers play in creating or publicizing the controversy?

Reading this post for the first time since I wrote it nearly three years ago, I’m pleased that it is still timely but realize it ends very abruptly. I should have written more commentary on the interview Enderlin gave to Annette Young at France 24. He’s obviously irascible and a very professional journalist, but not a man given to deep analysis. I like his comment about never having experienced any problems with any Palestinian groups — not Hamas, Islamic Jihad or Fatah — even though everyone knew he was a Jew with Israeli citizenship who resided in Israel. The reason, he said, was that he always presented himself as “Citizen: Journalist,” rather than a citizen of a specific country, meaning that his reputation and the respect it garnered came from his professionalism. 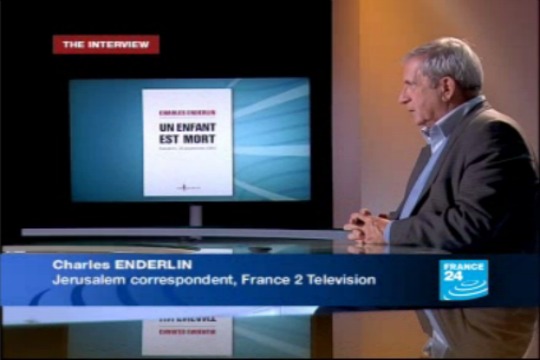 But Enderlin is less insightful on the question of why his bitterest critics came from within the French Jewish community, rather than from Israel or other Jewish communities. The scurrilous, ad hominem criticism directed at Enderlin by France’s Jews is quite similar to the very bitter attacks that were directed at Judge Richard Goldstone, following the publication of the UN-commissioned Goldstone Fact Finding Commission’s Report on the 2008-9 invasion of Gaza. That widely publicized report was strongly critical of the Israeli army’s actions. It caused huge waves in Israel and abroad, but particularly in South Africa: Goldstone was threatened with ex-communication from his tightly-knit Jewish community in Johannesburg, with the members of his synagogue even banning him from attending his own grandson’s bar mitzvah ceremony. Enderlin claims he was unmoved by the enormous wave of angry criticism directed at him by the French Jewish community, but he does acknowledge that his wife, who had read all his books from galleys to proofs to print, refused to read Un Enfant est Mort.