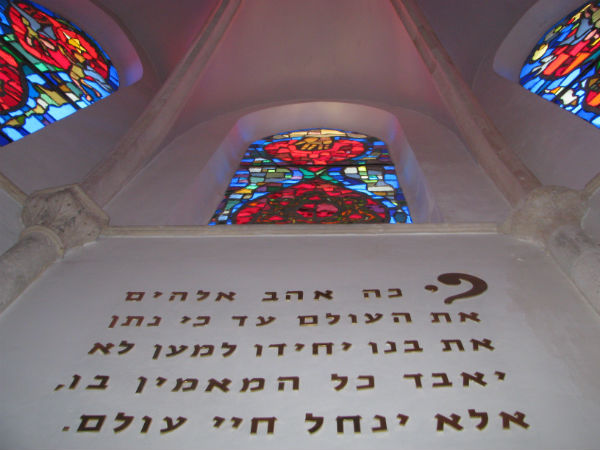 As a new day dawned, I decided to go out looking for Protestants. If there’s anything the Holy Land hasn’t much of, it’s Protestants. They’re here, to be sure, but in small numbers. Palestinian Protestants are rare, and while store-front churches that cater to African immigrants abound in South Tel Aviv, more mainstream churches tend to be modest to the point of invisibility.

My one clue was the steeple sticking out of Jaffa’s “American Colony.” It is a neighborhood with a story behind it: In the mid 1800s, an American named George J. Adams was excommunicated from the Church of Jesus Christ of Latter Day Saints. He accepted the leadership of another estranged Mormon: James D. Strang, then was excommunicated also from the Strangite church, where he was accused of adultery, embezzlement and drunkenness.

What was left for Adams to do but to declare himself prophet, form his own LDS-inspired church and bring it to God-forsaken Palestine, where not even the German Templers had settled yet. Adams established “Church of the Messiah” and fairly quickly ruined it. The only reminder of its existance is a tiny Americaneseqe enclave, tucked in the midst of the undeveloped and often derelict “twilight zone” between Tel Aviv and Jaffa. 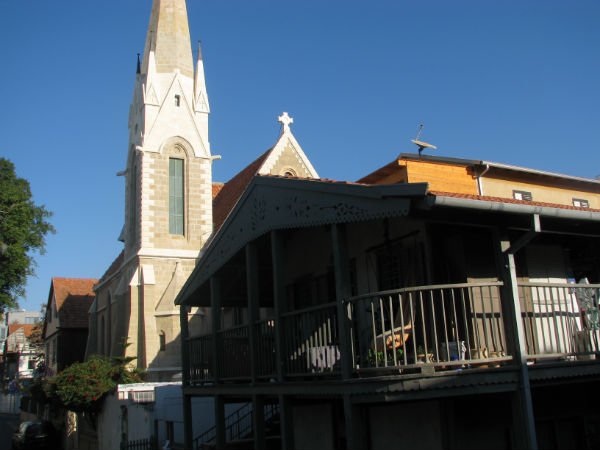 The church in its midst is the “Emmanuel Church,” serving today a diverse crowd of Protestants in the Tel Aviv area. Its pastor is a Danish and the grounds are managed by a Finnish volunteer. Nonetheless, the first person I met when entering the yard was a native Israeli like myself.

Her name is Dina, and she described herself as “one of the faithful.” 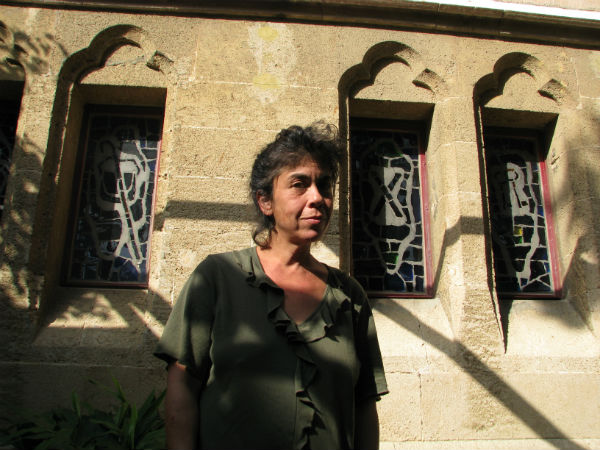 “I dislike the word “Messianic” because it sounds indirect and tricky,” Dina explained, “I’m Jewish, because my parents are Jewish, but my faith is entirely Christian. This is a Lutheran Church, so I’m a Lutheran. Messianic Jews say: ‘I’m Jewish, so I don’t go to church, I don’t celebrate Christmas, I just sit home and read about Yeshua.’ I’m not like that. Let’s be clear about it. There are three big monotheistic religions: Christianity, Judaism and Islam, and here is a place of Christianity.”

How did a native Tel Avivian woman end up being baptized Lutheran? Dina got to know the church through her father, who played organ here for several years before passing away tragically in an accident. She was 11 when orphaned and eventually found her way to the church that never attracted the father himself.

“Christmas for us is not about the gifts,” Dina said, “It’s not about all the shopping and flashiness. The meaning of Christmas is that we sin, we admit that we sin and that God himself came down as flesh and blood to atone for our sins. We do have a tree. This is because Jesus is the tree of life, and there is a verse somewhere that says: ‘For if they do these things in a green tree, what shall be done in the dry?’ I’m not sure where it’s from. Probably Luke.”

The Emmanuel’s tree will only be decorated on Thursday, but the foyer on the morning of my visit was full of six-pointed stars, mostly in holiday-relevant colors, likely the work of kids who hover between worlds. 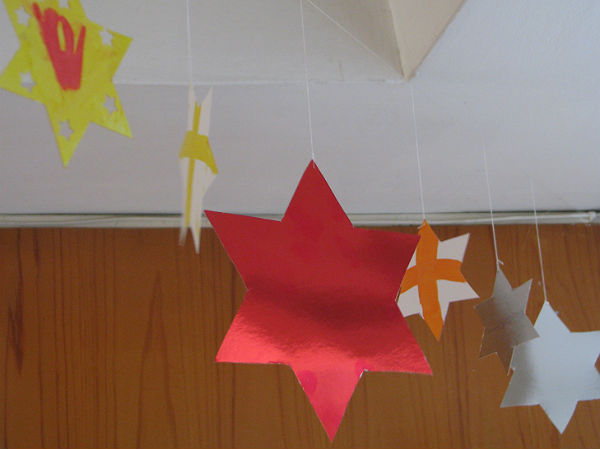 Outside the church I passed an Israeli girl, possibly a photography student, who took snapshots of the building. The chance that someone like her would step in, pick up a free copy of the New Testament and follow Dina’s path, is minuscule. For Jewish Israelis that would mean betrayal of everything our parents and society ingrained in us. The Messianic Jews provide different context and terminology that do appeal to Israelis, It would take an organist father to make one a Lutheran, and even then – perhaps only after his death. 11 years in solitary confinement would turn one of us into an Anglican.

I didn’t approach the girl to ask her how she experienced the church besides as an aesthetic structure. I was worried that she would mistake me for a missionary. To quote a wise stranger I once overheard: “an Israeli Jew hears the word missionary in the same way that a believing Christian would hear the word ‘Satanist.'”

Being scared neither of missionaries nor of Satanists, I got on a train and traveled on to my next destination: the Baptist Village. 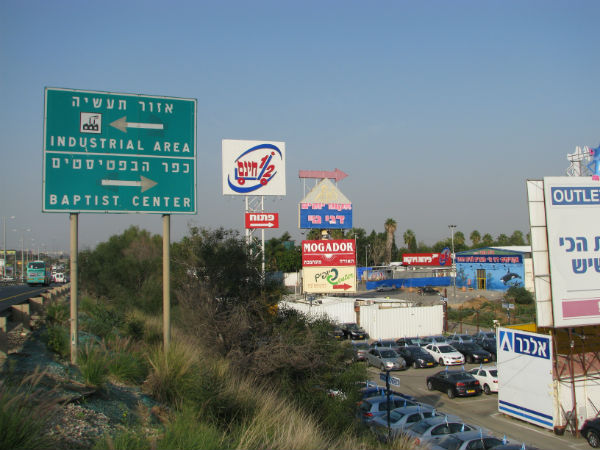 It was in 1953 that a group of American Baptists founded a community, near the source of the Yarkon stream. Since then the neighoring town of Petah Tikva became a suburb of Tel-Aviv and grew uncontrollably. Today the Baptist’s Village is located in the middle of strip mall hell on the very outskirts of the Metropolis.

Having never been here before, I was fondly surprised to find that the village itself is isolated both from the noise of the highway and from the overall ugliness of the region. A road of cracked asphalt led me through pleasant fields on to the first baseball diamond I have ever seen in Israel. 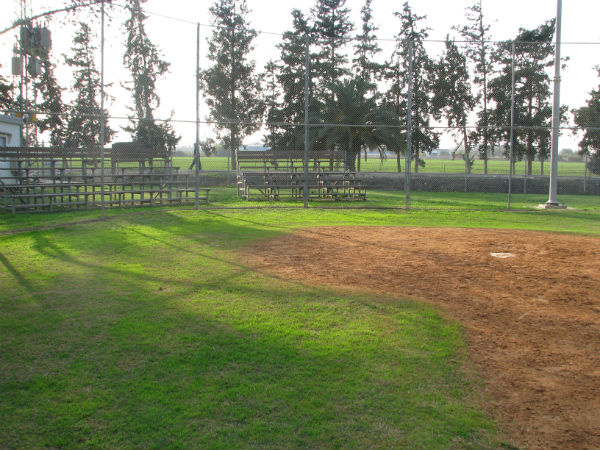 Inside the village I met Richard. Originally from Denver, he volunteers in the village but lives elsewhere. It turns out that only two people reside here year round: David, who cares for the grounds, and his mother. The rest of the village’s structures accommodate camps and programs for different groups, namely the Messianic Jews. If in Tel-Aviv I feared being taken for a missionary, here I felt a need to assure Richard and David that I will not paint them as such.

David grew up in Georgia. His secular family acknowledged its Jewish roots, yet celebrated Georgian Christmas, complete with the traditional foods: Lobio (a bean dish) and Pkhali (an indescribable but tasty muck). Like Dina, David lost his father, who was murdered in Tbilisi in a bout of political violence in 1993. This tragedy, and the consequent move to Israel, led to the parallel discovery of his Jewish roots and of the gospel. 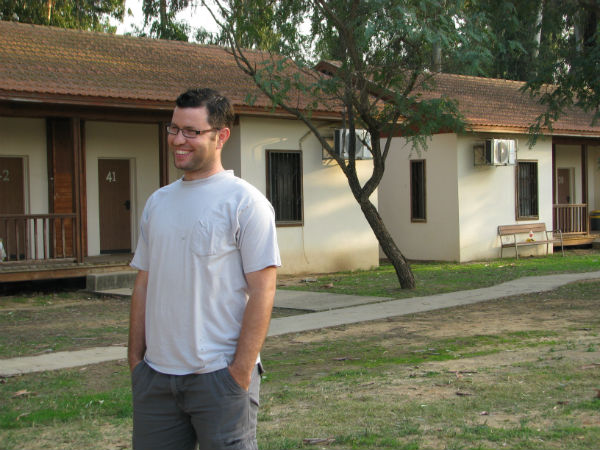 David’s Christmas is somber, perhaps even more so than Dina’s. “You will not see any Messianic community that celebrates the way they did in the Soviet Union of the United States,” he told me. “To begin with, the date is insignificant, because it is far more probable that Yeshua was born in October, and the tree… You must know that it is a pagan tradition. Pagans would put their idols on trees and this symbol was adopted in Christianity.”

David told me that a visiting American pastor is to arrive on Friday and give a talk on the relationship between Christmas and Hanukkah. Other than that, Christmas appeared to be not much of an issue at the Baptist Village. Richard did decorate a tree, but it is kept in his home in Herzliyah. I took a photo of the only reminder of Christmas in the village’s office: an olive wood nativity set, put out for sale, 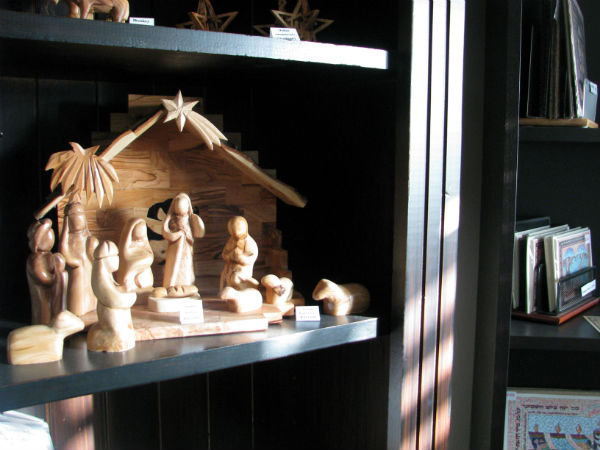 took one of the beautiful orange grove outside. 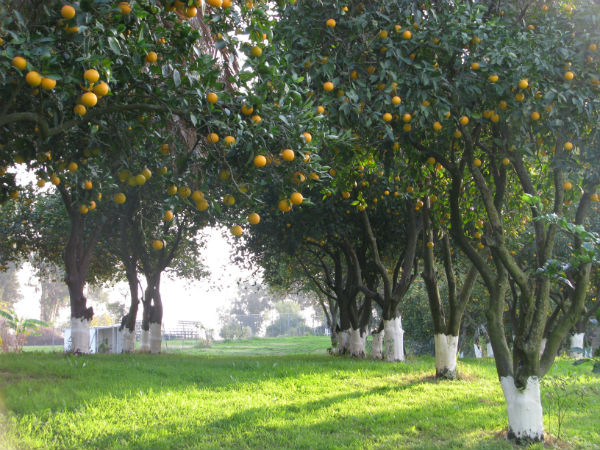 and one of the unique chapel, carved out of an old British army warehouse. 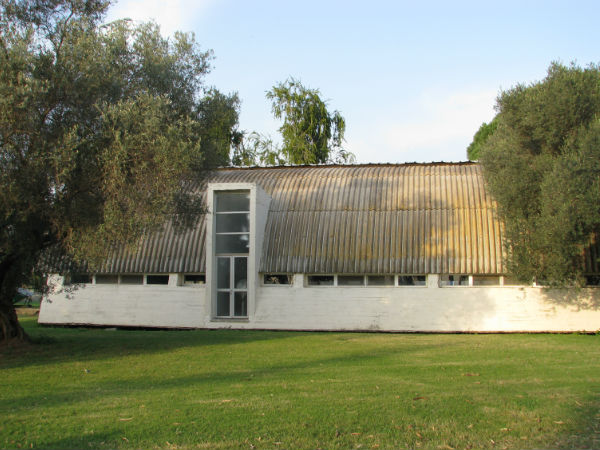 Then I headed for the urban Godzilla known as Petah Tikva, deep in thought. How is it that my search for Protestant Christmas led me to two individuals who identify in some way as Jewish? What does it mean that both of them made a point of rejecting mainstream Christmas traditions? 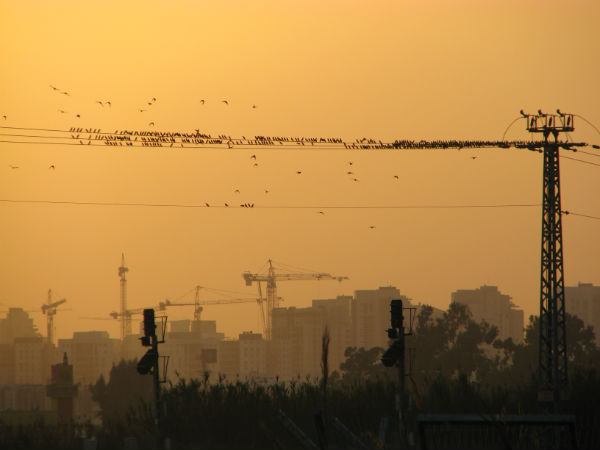 Were they trying to show that it was pure faith that attracted them to Christianity, rather than the temptation of the ornaments and gifts? Is this part of the reason that Protestantism, with its modest aesthetics, attracts converting Jews more so than the older churches, or is it simply the lesser historical baggage?

Upon entering Petah Tikva, I passed a good example of modest Jewish aesthetics. It was a lit Menorah, placed on a window sill to “tell of the miracle,” as tradition dictates. 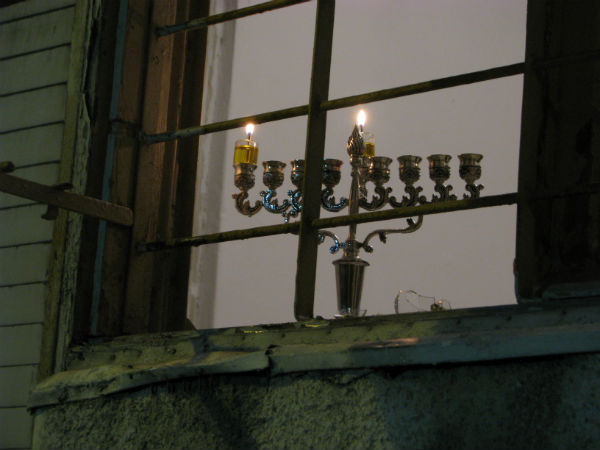 I felt the questions quieting down inside me, and despite how pleasant the day has been, a precious sense of home filled me. I respect those who see the light elsewhere, but personally have no need for anything beyond this, not even for a saviour, only perhaps for more people to understand that all candle flames share something, and that unless cult dynamics or hateful teachings are involved, people should never be criticized for their religious choices. All holidays belong to whoever cares to celebrate them, even missionaries, even Satanists. Happy Hanukkah to all.