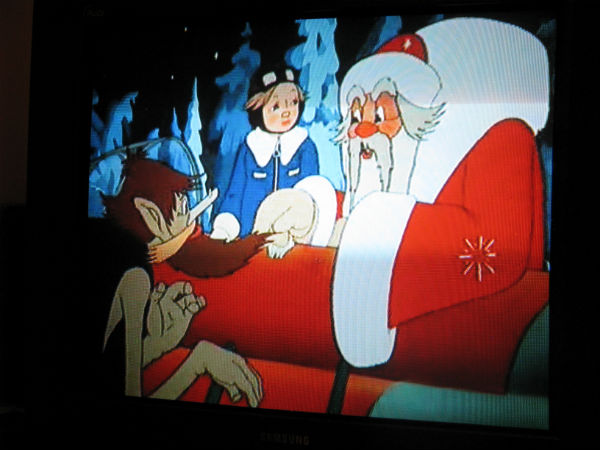 I was hungry, walking at dusk into the city of Petah Tikvah from the Baptist Village. I took a peek into a a small Russian tavern. The looks of it didn’t really work my appetite, but something in there did catch my eye. 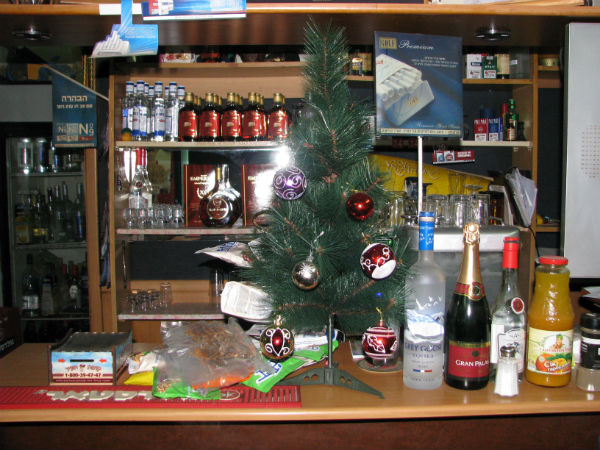 The convenience store next door had a proper display of Christmas candy. 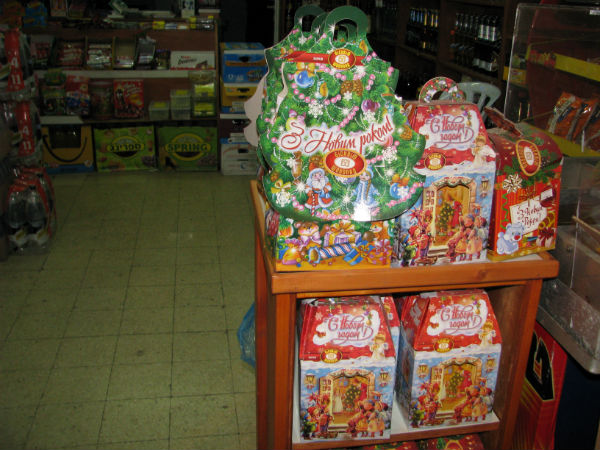 The bigger grocery store around the corner was all about Christmas, from chocolate Santas to green and silver stretched along the counter. 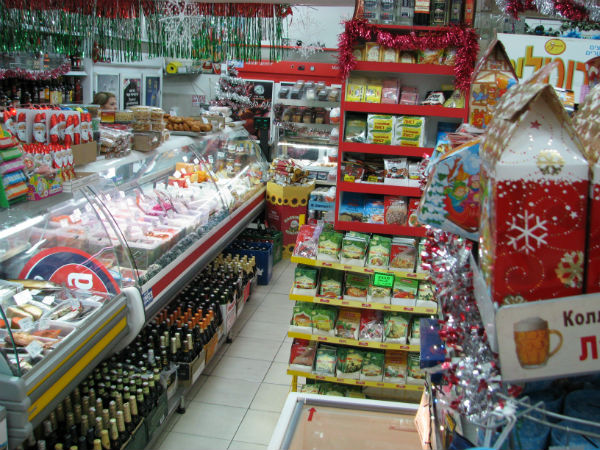 Then, at the very heart of this city revered in Zionist history, I met up with Christmas hysteria face to face. A gift shop named “Energy” offered every possible Christmas commodity dreamable. In its window stood a fir that showered itself with little Styrofoam balls. 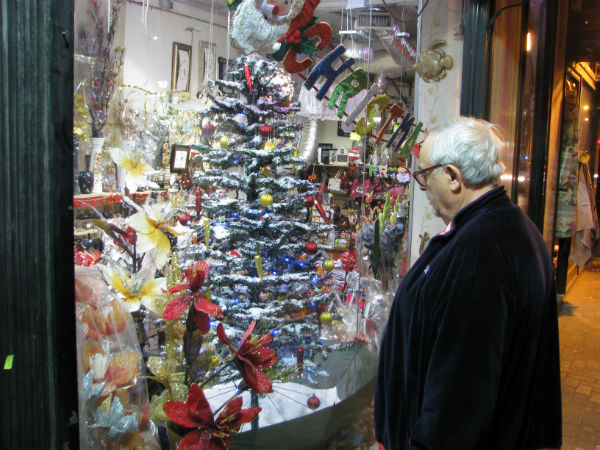 For the most part, these stores serve the Russian speaking community and are operated and owned by Russians. Following the fall of the Soviet Union, nearly a million Russian immigrants came to Israel. Every seventh Israeli citizen has either come here as part of that wave of immigration or was born to parents who did.

This community’s relationship with Christmas confuses many Israelis. I, too, found myself wondering over the years: If the Russians celebrate Christmas, how can they be Jewish? and if they are not Jewish, how did they get to make Aliyah and repatriate here? What kind of tricks and bribe did they use?

I bought myself some salami and a pickle at one of the Russian delis and went home. Then, the following morning, called up my friend Yanna, a Russian-born magazine journalist, and referred the question to her. What she told me made some sense of the tale told by born again David, in the previous post, and a lot of sense of a country that grows greener and redder every year for two decades now.

It turns out that while Christmas proper (“Rashdistvo” in Russian) was not sanctioned by Soviet authority, New Years (“Novy God”) was. Citizens of the Soviet Union infused Novy God with the traditional symbols of Russian Christmas: the figures of Grandpa frost (“Diedmoroz”) and his helper or granddaughter Snowflake (“Sniguruchka”), trees and gifts, carols and lights. The national, officially secular holiday was celebrated by all, including Jews.

“God was nonexistent, and anything Soviet was repulsive, “Yanna explained, “so ‘New Years’ was the single most important day of the year, at least as important as one’s birthday. It was a ‘pure’ holiday, clean of religion, of politics and of brainwash.

“For us,” she continued, “this was in fact the only holiday. We were a Jewish family and conscious of our Jewishness, but lacking the most basic knowledge of the history of its people or its traditions. I remember one Passover when we got Matzos from a friend who traveled in from St. Petersburg. We sat on the table full of bread and pork and we ate them without really knowing what they meant. All we knew is that they were Jewish, and they tasted heavenly.”

“When we got to Israel, our lives became completely un-festive. For two years we lived in an ugly apartment in Ashdod. We made one or two attempts to recreate ‘New Years’ – there was some tiny, artificial tree that my mother decorated with her jewelry. There were no gifts under it and in general it looked kind of gloomy. What reason did we have to celebrate this holiday? It became meaningless in a country where everyone was Jewish and it didn’t snow.

“On the other hand, the Jewish holidays were not relevant to us. It would be artificial to celebrate holidays that we never celebrated before, that we didn’t even know existed, almost as artificial as that miserable Christmas tree in that apartment in Ashdod. We were left holiday-orphaned.”

I was speaking to Yanna on the way to the train station, on my way to visit Ashdod, home of that jewelry-laden tree and of a one of the country’s biggest Russian population. Her story intrigued me so much that I ended up boarding the wrong train and only noticed this when ‘Ben-Gurion Airport” was announced on the PA.

I spent a few minutes walking around the terminal. This is the gateway which thousands of pilgrims use at this time of year to reach Bethlehem, Jerusalem and Nazareth, yet only one holiday is mentioned in the greeting posted at the arrivals hall. Like the old Kremlin regime, our government sanctions holidays and chooses what we should celebrate, though thankfully the restrictions are not as severe. 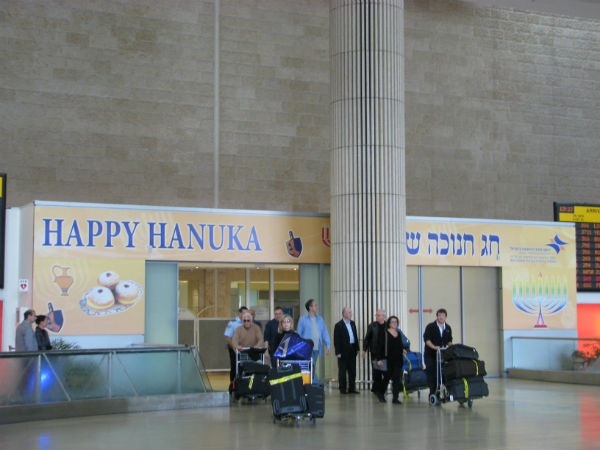 Since returning to Tel Aviv would be too time consuming, I took a cab to Lud, a town near the airport, which has rail service to Ashdod. One hour later I disembarked at Ashdod station, but wasn’t yet in Ashdod. Israel’s railways were not necessarily designed to correspond with its urban centers. Ashdod’s center is far from the station and only accessible by taxi.

Having already spent my day’s emergency cab budget, I made my way into town over the dunes. This is probably the place to point out that generous donors have helped me cover about half of this journey’s travel and food expenses. That leaves another half that you – kind reader – if you haven’t yet donated, can help cover. Many thanks and in the spirit of this post – spasibo!

Anyway, Ashdod soon emerged from among the dunes. I’ve heard critics of Zionism say that they find the presence of Russians in landscapes such as this disturbing. I personally love Russians, I love their Shuba salad, their Chekhov, their Cheburashka. I think this land is blessed to have them. I don’t like too much the politicians they brought with them, but then, native Israeli-grown MKs aren’t any more impressive. 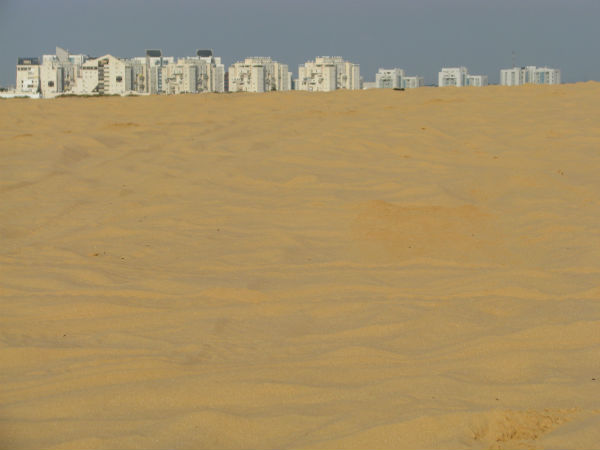 Ashdod, which was founded in the 50s and where I spent an entire day on the September Journey, is divided into a number of square quarters. I navigated through the dunes directly into quarter 13, which Yanna described as the “Russian Ghetto.” Indeed, upon entering the neighborhood, I noticed an ad in Cyrillic posted to a bus stop. My Russian hardly matches Pushkin’s, but I did extract that it advertizes a Hannukah bus tour to Jewish religious sites, to be accompanied by a rabbi. 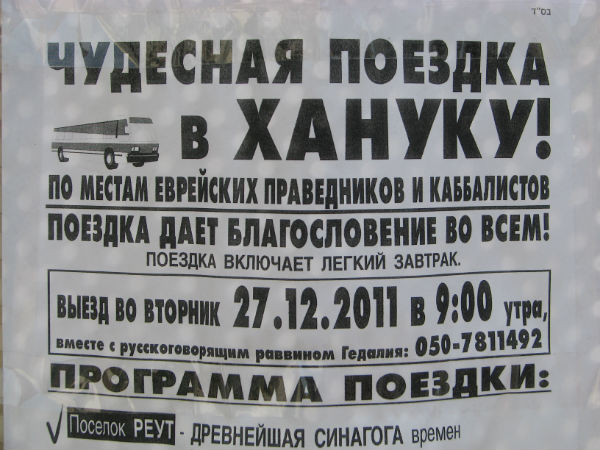 While I took this photo, an elderly gentleman emerged from the bus stop. I turned to him in Hebrew. He asked whether I could speak Yiddish.

Felix, a veteran photographer, claimed that he never celebrated Christmas, not here ,nor back in Kyiv. I was reminded that many Jewish families in the former Soviet Union did know their history and heritage and that some brave individuals even taught it – though it was illegal. Hanukkah was celebrated illegally, often with the aid of Zionist activists, who smuggled candles and dreidels. Jews caught performing such actions served years in prisons for engaging in “subversive activity.”

What was I to make of the tour ad and of my meeting with Felix? Was Quarter 13 the stronghold of Russian Jews who shun Christmas after all? Not really. It’s shopping area proved to be rather Christmassy. Three kids stood by a plastic tree with only Hebrew on its price tag. I asked them whether they celebrate Christmas, two said yes, one didn’t quite know what it was. I asked the two who said yes whether they were Jewish. They said: “We’re Russian.”

Since the two Russians wouldn’t have their photo taken with the tree, so I took one of their friend. 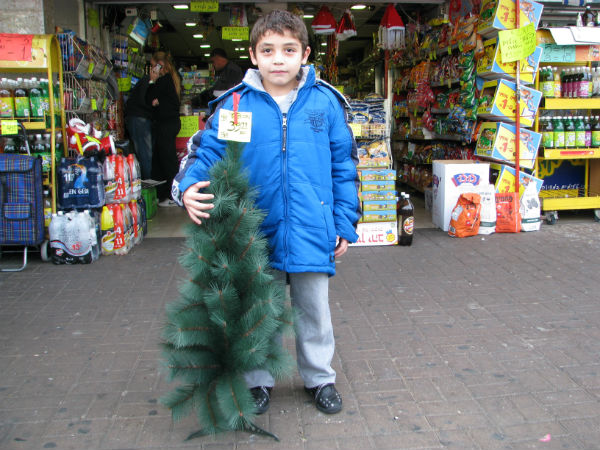 A bus then carried me to quarter 1, to enjoy the best experience Russian Ashdod offers: lunch at “Nash Miesto,” the same bar I visited on the September Journey, and where the owner Ilya, accidentally shot me with a BB gun.

Ilya was in a fine mood when I arrived, and added to my order of pork chops and beer a long succession of free whisky shots. Within an hour I was trashed. My attempt at interviewing Ilya about Christmas was pathetic. I did learn the following: 1. He prefers to celebrate Hanukkah. 2. There’s some unnamed holiday on Sunday, so I am invited to come and enjoy a proper Russian-holiday-Dacha-sauna experience in the sauna attached to the bar, with Ilya and his whisky-guzzling friends. 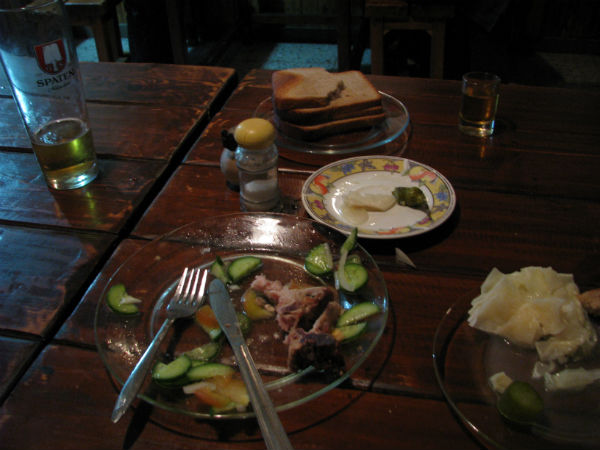 I slept on the bus going back to the Tel Aviv, woke up confused and had a completely unnecessary jelly-filled donut at the central bus station. It was crucial that I recover, because the day’s most important station was still ahead of me: Talia’s house. 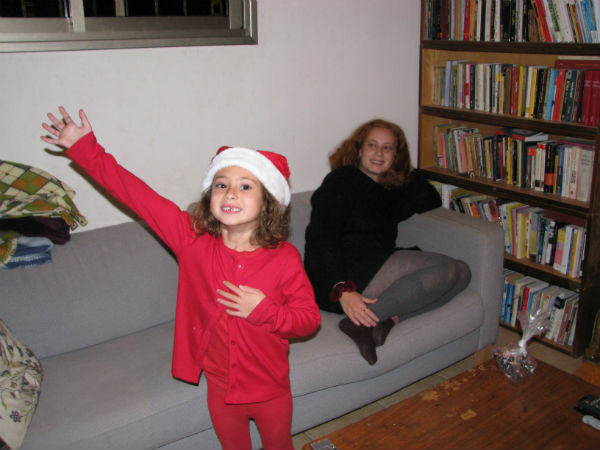 Talia is the daughter of my dear friends Masha and Yonatan. Masha, who was home with her when I arrived, is critic, filmmaker, bibliophile and expert on all things Russian and non0Russian. She and her husband, who is a great guy despite not being Russian, produced a fine documentary on old Soviet cartoons, named “Magia Russika.” They are among the first to have awakened my deep love for Russian culture.

In Talia’s house, both Christmas and Hanukkah are present. “I feel that both of them are holidays that celebrate the triumph of a spiritual authority over a more formal political authority,” Masha said, “and both of course express our yearning for light in winter. In this sense they are both ‘pagan’ holidays, and I’m in favor Pagan holidays. Theologists may sit in universities and invent holidays without heart and soul, but people want color to believe in and to hold on to.”

It seemed unfair to ask Talia which holiday she likes better. You wouldn’t ask a child whether they liked mom or dad better, either. So I decided to simply flow with the spirit of the evening. We read a few pages of an Asterix comic book (appropriate for Hanukkah), then watched an old Soviet cartoon. It showed Grandpa Frost and a wood goblin competing in magic. The goblin’s magic tricks were old fashioned, while Grandpa Frost’s included Soviet technological achievements such as the metro and the television set. In the end was a dance of mushrooms, ripped off from Disney’s Fantasia, and then the image of a red star.

In the cartoon, Little Snowflake could turn on a TV set, but little Talia in real life can light a menorah, and that’s a much bigger deal. I’ll leave you for now with this image. Tomorrow will be the last day of this journey and the most significant for me personally. See you all when the last, 12th post is published and meanwhile – до свидания! 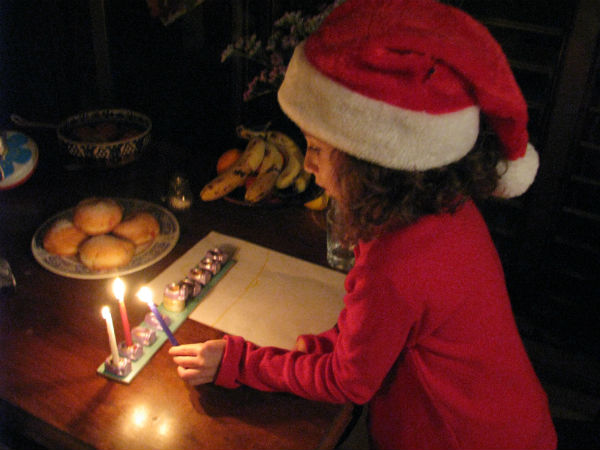