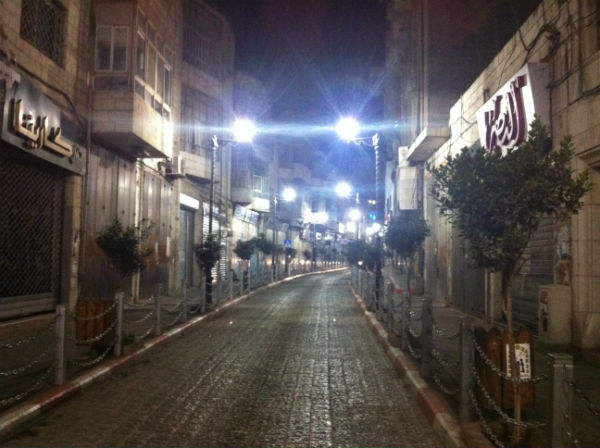 My Australian readers will have to forgive me on this one, but Christmas is about winter. The first condition to knowing holiday spirit is a Jack Frost-bitten nose. This is why I was so glad to arrive last night from Taybeh into a freezing Ramallah. At 800 meters above sea level, this is one Middle Eastern city that can claim to have a decent winter. It even snows here once or twice a year.

There’s more to winter than simple chill. A charming cafe off Clock Square supplied the other ingredients: candlelight, mulled wine, cosy conversation and even live Irish music provided by my fried Damon and his small band. They did not play any carols, but they did play “Auld Lang Syne,” a seasonal favorite. 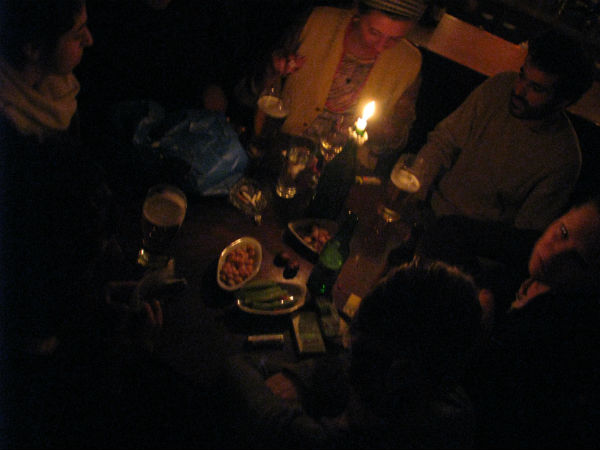 I stayed over with some other friends in Ramallah’s old city and woke up in a true winter wonderland. It was two degrees centigrade at 8:00 AM, which means temperatures went below zero before dawn. Outside the window, a frozen blue sky hung over hillside suburbs. 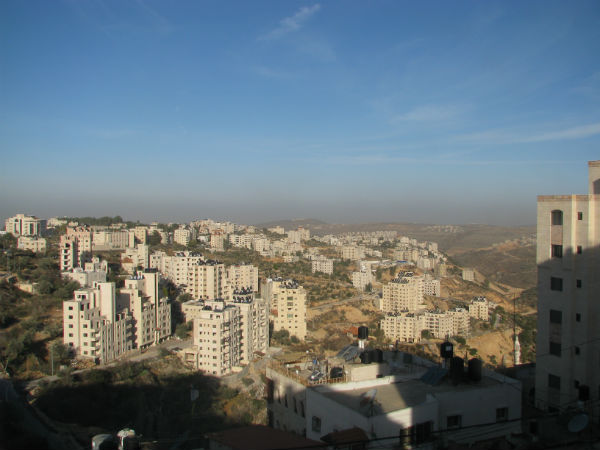 We lit the stove and played with Fareed (“Farfour”) the kitten. Christmas is all about home, you know. 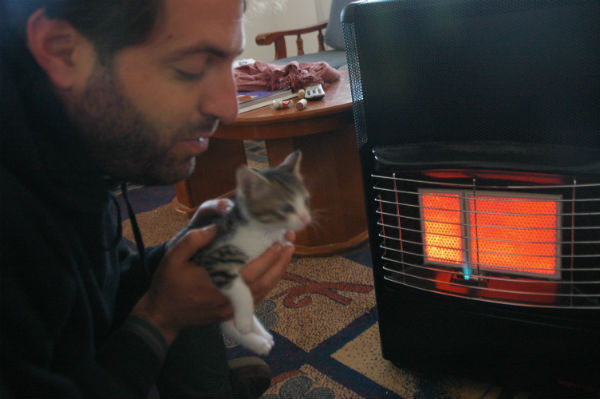 But the journey has only begun, and the desert to the east of the city was calling. My friends Alyssa and Shay joined me, and we headed by car for one of the West Bank’s historical monasteries. We were aiming for Mar Saba, a gorgeous, fortified cliff-top marvel south of the Maaleh Adumim settlement, but were stopped at an IDF checkpoint and sent back (for those less familiar with the map: all paths taken on this day wind through the West Bank). Fortunately, the fetching Orthodox monastery of St. George, tucked in the narrow canyon of Wadi Qelt since the 6th century, is easily accessible. 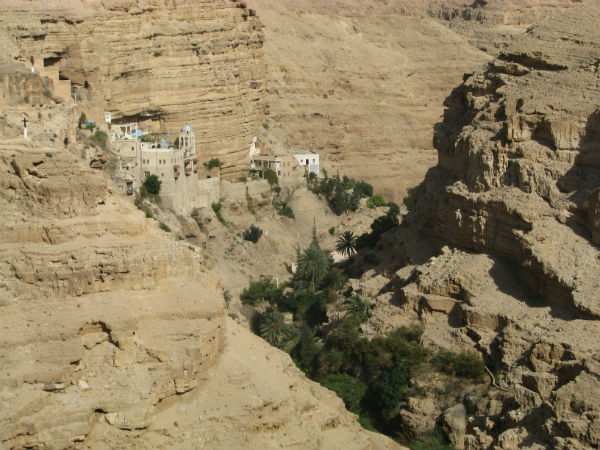 We hiked down in the heat of the desert, forgetting about the subarctic clime we experienced less than one hour earlier. Wadi Qelt opens to the great rift valley. The nearest town, Jericho, is situated 250 meters below sea level. Winter is virtually unknown there. 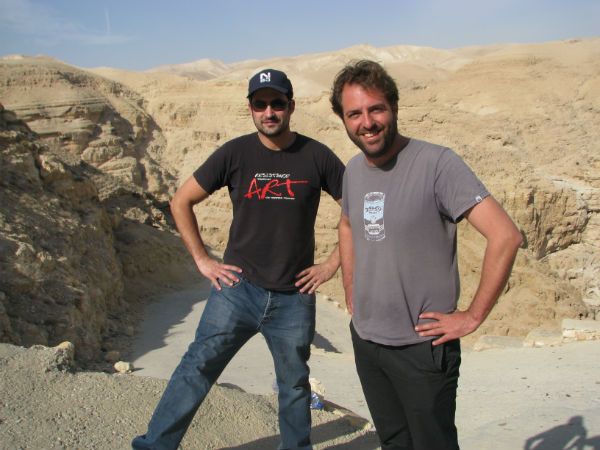 Inside the monastery, I approached Brother Daniel, one of only nine monks living on the grounds, with dozens of questions about monastic Christmas. I knew that the Orthodox celebrate Christmas not on December 25 but on January 6 (the holiday of Epiphany for other Christians). That, however, is basically all I knew.

Daniel told me that for 40 days prior to Orthodox Christmas, the monks observe a wintry Lent of sorts. On all days of the week they abstain from meat, and on Fridays, Saturdays, Sundays and Mondays they also abstain from cheese, fish, and oil. Christmas eve consists of a night-long service, at the end of which the monastery is visited by faithful who bring food offerings, mostly fish. Having consumed that, the monks rest a bit, then return to pray until the following morning.

You’re right, that doesn’t sound like a lot of fun, which may be part of the reason that Daniel skipped the St. George Christmas two years ago and went to celebrate with his family in Greece. This year his mother will come to visit. 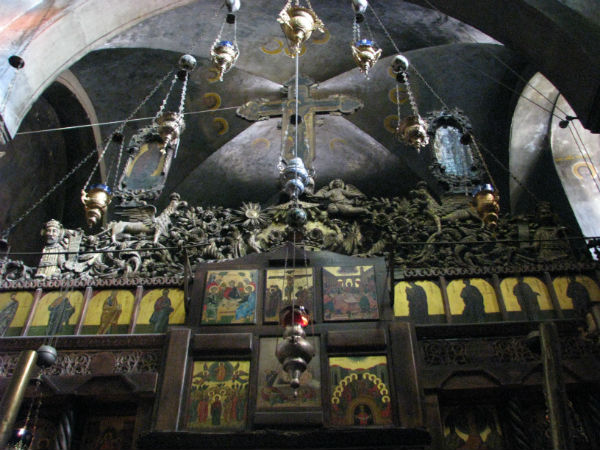 We wandered through the corridors until we reached a room where pilgrims bow before a mummified corpse. It belongs to a monk who was martyred when the monastery was sacked by the Persians in 614. I mention it here only because I don’t often stumble upon a corpse, especially one as dignified as that, and not talk about it later. 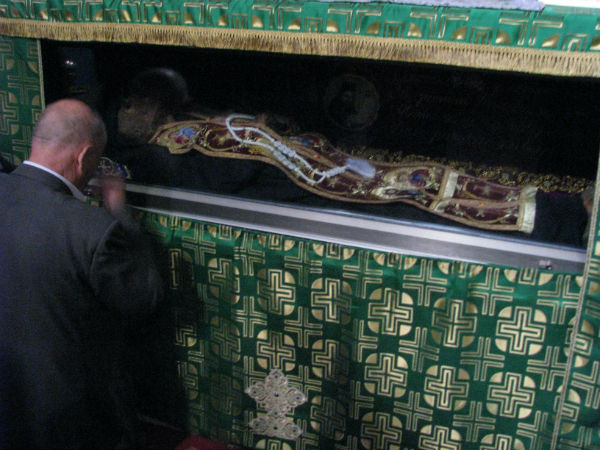 Having emerged from the canyon, I had to bid farewell to Alyssa and Shay (whose birthday is on December 25th). They each had to attend to different engagements, one in Jerusalem, one in Tel Aviv. I caught a minibus back to Ramallah and contemplated my next move.

I decided to go and visit the university town of Birzeit, ten kilometers north of central Ramallah. I made my way there by foot. Palestinian urban landscapes fascinate me; I could walk through them for hours, especially in such fine weather. Ramallah in the afternoon was sweetly autumnal – preparing for the chill of night but not letting go of the warm day just yet.

Actually, I’m kidding myself. I’m being deceived by my own wish for “appropriate” atmosphere. Forget winter, forget white Christmas, the afternoon was hot. I had to buy a can of some atrociously sweet, Saudi-produced soda, just in order to chill myself down. 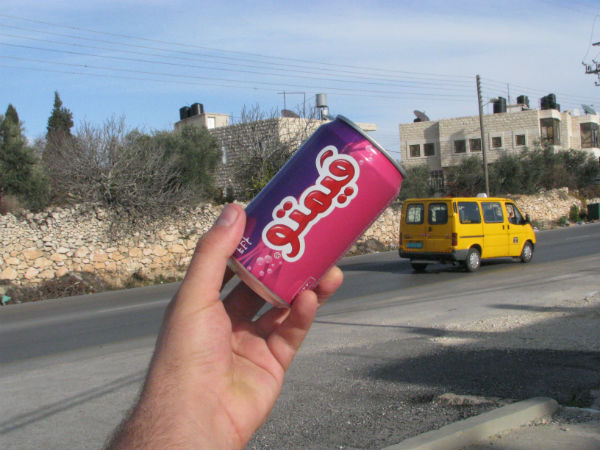 Then I had a minor accident: I put forth one leg in order to scale a large rock that blocked my path and my pants just split in two, right down the middle. A majestic tear formed right at the strategic place where my underwear would be most visible.

I was more than halfway to Bir Zeit at this point, in the middle of one of Palestine’s peculiar apartment-building-studded country landscapes. There was not a shop in sight. I was embarrassed to hop on a minibus, knowing full well that people would stare at my crotch. Venturing carefully into the nearby village, I sought a boutique in vain. The place would have been a paradise had I needed my car radiator fixed. It only had garages, and they were full of the exact type of guys that would find my condition hilarious.

I was living the ultimate Israeli nightmare: standing in the middle of Palestinian-controlled Area A in my underwear. There was no other choice but to catch that minibus into Birzeit and start timidly asking around. It appears that in Birzeit, one can find any imaginable form of grilled meat and many models of toilet seats, but no “bantalon.”

Finally one guy got out of his shop, locked it up and told me to follow him. He walked into a narrow alley surrounded by stark concrete walls. I’ve been around long enough to know where such alleys lead. He was drawing me into a refugee camp.

No Israeli in his right mind would follow a Palestinian stranger into a refugee camp – unless he is with his pants down and would do literally anything to get dressed again. I followed. The camp turned out to be minuscule. Only several hundred souls reside in Birzeit’s camp and it is likely the West Bank’s smallest. Soon we were out on its other side, entering a jeans shop.

I got good bargain on imitation Levis for 80 sheqels, and had the pleasure of meeting Ibrahim, who went out of his way to help me. Christmas is all about being kind to others, isn’t it? Birzeit is in Samaria, and in this sense Ibrahim certainly proved that good Samaritans do indeed exist.

Of course he isn’t Samaritan by ethnicity, but a Muslim. Being in disagreement with reader Sinjim, who commented on the last post, I asked Ibrahim whether Birzeit has a Christian majority. He said the population is religiously split half and half between Christians and Muslims, but Wikipedia sides with Sinjim, putting the margin at 60% to 40%, so I stand corrected.

Now fully dressed, I popped by the university to see if any interesting seasonal activity was in store. The bulletin board only featured one poster: commemorating Mustafa Tamimi, the story of whose death opened the previous post.

In a world as dark as ours, every light we shine is meaningful. I headed back to Ramallah for the lighting of the city’s Christmas tree, scheduled for 6:00 PM. There was time to stop at my favorite Argileh Cafe, Al-Jamal in the old town, and chat with Sam, the owner’s son, over billows of powerful “Tumbak.” 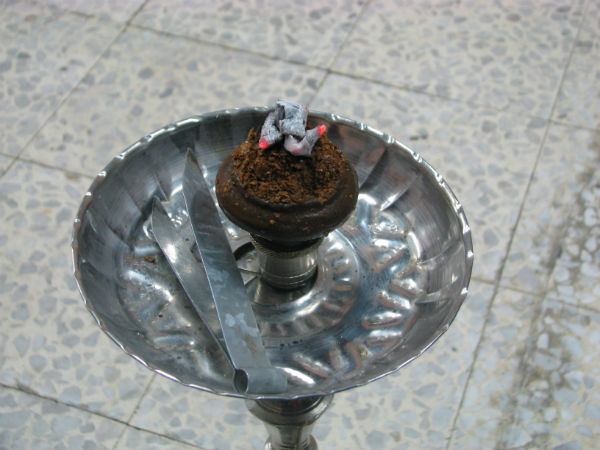 I learned from Sam that West Bank Christians receive one-month permits from Israel to travel across the lines at Christmas time. This enables families to reunite for the holiday. I can think of more generous gifts than to grant people for one month a right they should naturally always have, but oh well, it was getting cold outside and fireworks were flying around Ramallah’s mostly Christian old town. Soon the tree would be lit. This was no time to be cynical. I bid Sam farewell and went over to the municipality.

Hundreds were gathering in front of a stage by the modest municipality building, listening to a local music group and to the Trondheim String Orchestra, which arrived from Ramallah’s Norwegian twin city. Santa’s little helpers were already there when I arrived, as were the little drummer boys. 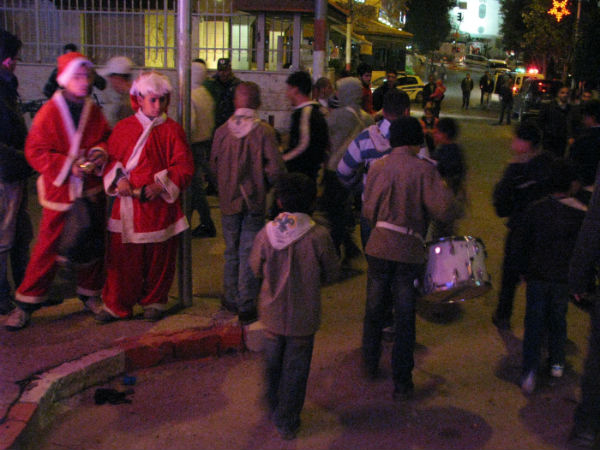 Santa himself made an appearence. 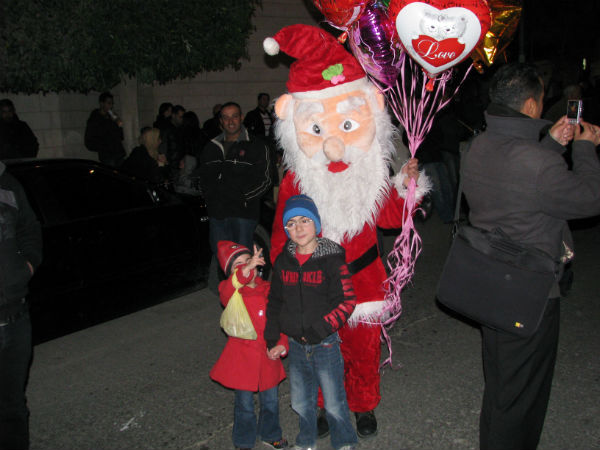 Before lighting the (somewhat unusual, still growing, cypress) tree, the crowd was asked to stand up in honor of the martyrs. I noticed Prime Minister Salam Fayyad among those rising, as well as prominent Palestinian politician Yasser Abed Rabbo. They were not the only Muslims around. Several of the little kids wearing Santa hats were held by mothers in hijabs. Oh, and there were Jews there too – at least myself and Alyssa who joined me. One couldn’t help but feel that despite the intensifying chill, this was a very warm night. 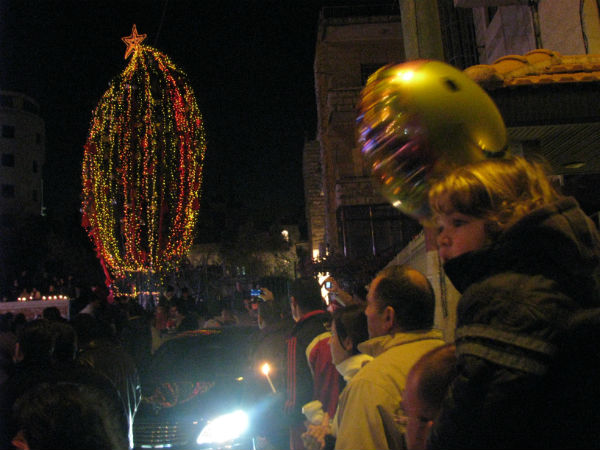