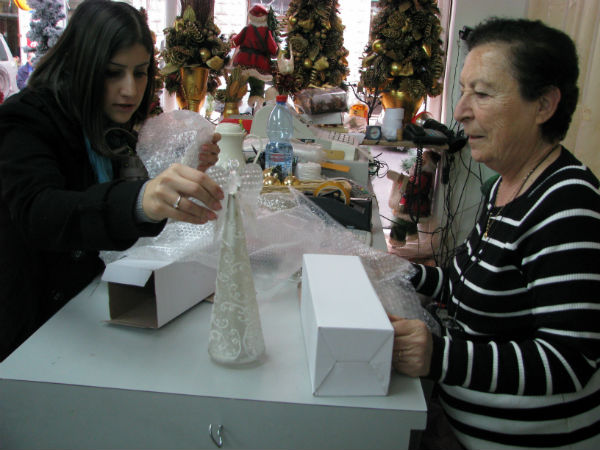 I brought Ruthie a couple of small treats from Ramallah. One of them is a chocolate Santa, which looks entirely out of place in Tel Aviv’s surroundings. 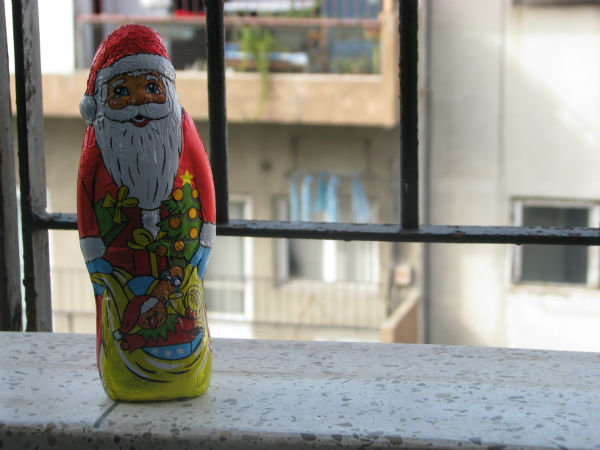 As I headed out this morning, I kept thinking of how foreign this holiday is to us Jewish Israelis, and yet how much more familiar it has become in recent decades. Christmas is a stranger in our culture, but one who appears at our door newly each year. Have we come to accept him? Should we come to accept him? Would it make sense to show him hospitality, or is he a dangerous infiltrator who should be kept out at all cost?

There’s value to the Christmas taboo. For one, it’s nice to not have a holiday throw us into consumerist hysteria. At the moment I can only see Santa used to advertise a legal, albeit disgusting, artificial cannabis substitute. 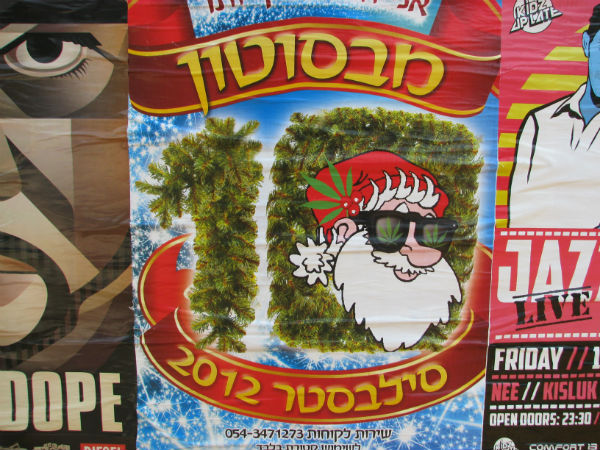 Then again, I admit to some ambivalence. Over the years, upon realizing that Christmas was celebrated by Japanese Buddhists and atheist Danes, I have come to regard it less as a Christian holiday and more as a human phenomenon. While I can’t imagine ever properly celebrating it, I’m open to incorporating elements of it into my December. It makes me feel closer to the family of humanity.

How do less Christmas-tolerant Jews view the holiday? Having boarded a Haifa-bound train, I walked through its aisles, looking for a true follower of the Talmud. Once a Haredi man was spotted, I sat across from him, trying to muster enough courage to ask a non-kosher question. It was surprisingly difficult, but in the end I did. 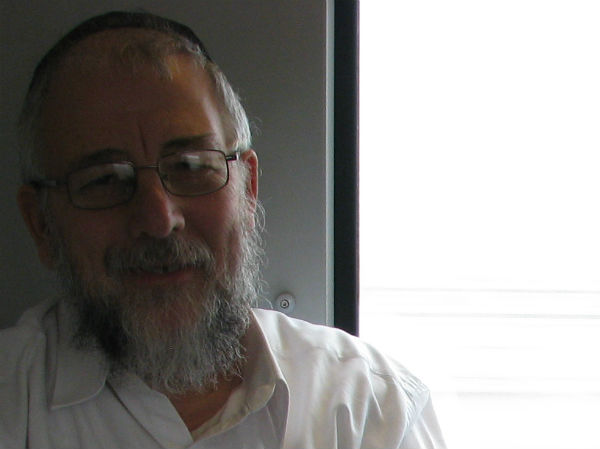 Geoff grew up in a Litvak community in England. The sight if Christmas trees charmed him as a child, and yet he finds resisting Christmas easy. “This holiday has a history of pogroms”, he said. “The Christians claim that it’s a time of love, but historically it was precisely the opposite.”

Geoff said he’s uneasy with the sifting of Christmas into Israeli culture. “An observant Jew is less likely to be tempted, but an assimilated, secular Jew is at risk. I’m upset with the Russians for bringing it here. The precise reason we came to this country was to get away from that.”

As the train reached Haifa I felt a real need to drink to the common sense of my recent ancestors who came to the land of Jesus to escape his birthday. The Fountain of Beer (“Maayan Habira”) is a delightful Tavern specializing in East European food and located not far from the central station. I headed right there and got me a roasted pork rib in garlic, or “kostiza”. 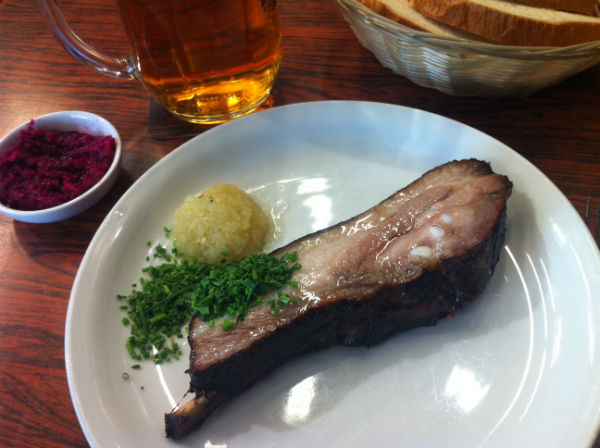 The kostiza is of course another gentile stranger not entirely unwelcomed by secular Israelis. Pork products, as well as non-kosher seafood, have become increasingly available in Israel since my childhood. Personally, I abhor culinary taboos and am fully open to this stuff, especially when it tastes like the Fountain of Beer’s offerings.

The place is full at lunchtime, and just as I asked for my bill, a group of older Israelis came to join me at my table. They refused to let me leave, insisted on paying for my meal, and literally forced me to order gefilte fish. Were they sent by the spirit of my disenchanted grandfather? That’s likely.

The gentleman who led this attack of friendliness is a seaman in his 70s, seen in the photo below. When he was born, in Safed of the late 30s, his parents gave him a name that rings right in Arabic too: Issa. This is also the Arabic name of the man who died on the cross. I was being force-fed gefilte fish by Jesus. 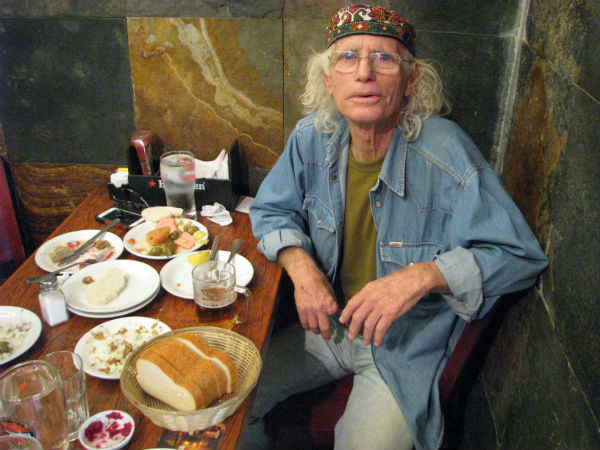 Stuffed to the core, I headed up to see Haifa’s Christmas tree. It was designed by artist Hadas Itzkovitch, and is made entirely of recycled mineral water bottles. 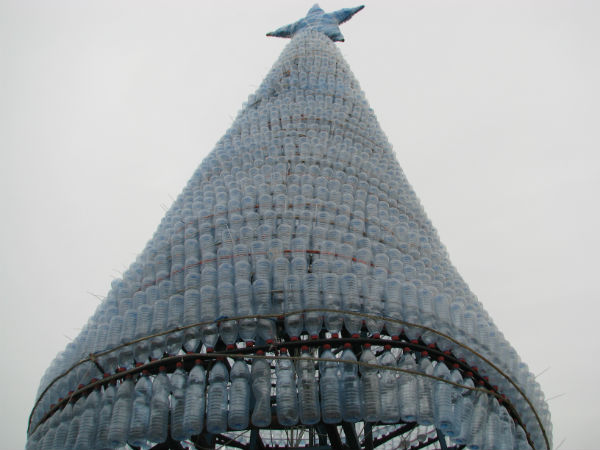 Haifa prides itself on being an oasis of coexistence, and amazingly it does seem to be one. It’s one thing to have a Christian-Palestinian neighborhood full of stores that offer nativity sets. 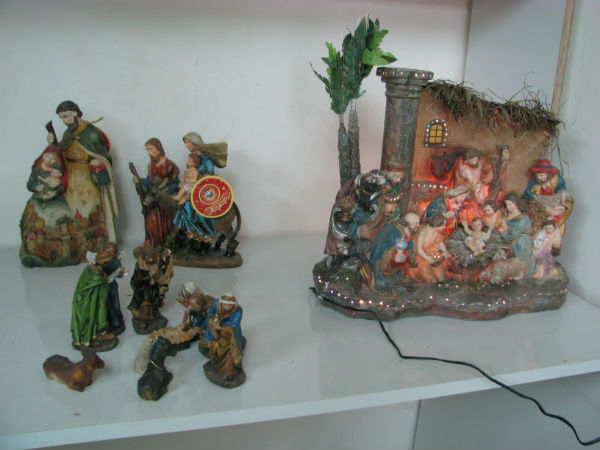 It an entirely different thing to have an entire festival centered around the joint celebration of Christmas and Hanukkah.

I walked into the offices of Beit Hagefen (“Vine House”), the Jewish-Arab cultural center that initiated the “Holiday of Holidays” festival 19 years ago. At the time, Eid Al-Fitr also coincided with the two holidays, since then it spun around the calender several times, as Muslim holidays do. Still, the good intention remains and it translates into a month long feast of indoor and outdoor art shows, street fairs, musical performances, et al.

Hilla, one of the festival’s producers, prepared me for its climax: “Next Thursday we will have a huge mix up of Christmas and Hanukkah all over Ben Gurion boulevard,” she cheered, “We’ll have jelly-filled donuts and gingerbread, Christmas trees and menorahs. Santa Claus will be giving out Dreidels! By the way, you have to meet Santa Claus. He lives right behind Beit Hagefen, on Hadad street.”

“Yeah, it’s this guy named Nicola who does this every year, everyone here knows him as Santa. He has the beard and the belly. He goes to hospitals to cheer kids up. He’s marvelous, and you must see his house. Actually, you can’t miss his house.”

She was right. Santa’s house is hard to miss. 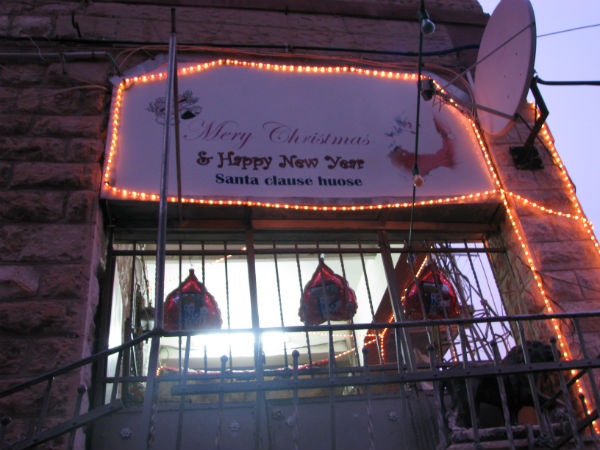 I was invited inside and poured some coffee. Three days into the journey, I have just entered an actual family home decorated for Christmas. Actually, considering that the patio is designed to look like a grotto, where plastic reindeer perch around Santa’s throne, “decorated” may be an offensive understatement. Suddenly I was the stranger in the very home of Christmas, it felt – well – a lot like being abroad. 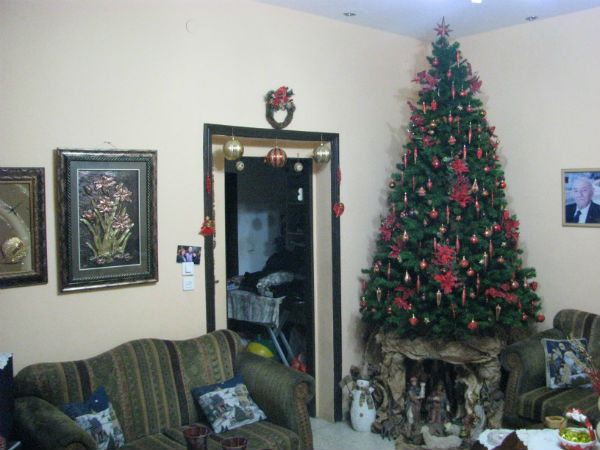 Nicola was busy preparing for the night’s engagement: a party at the Max Stern college, 40 kilometers east of the city, near the town of Afula. Having combed his hair and fetched his gloves, his bell, his glasses and his cane, Santa joined us for coffee. 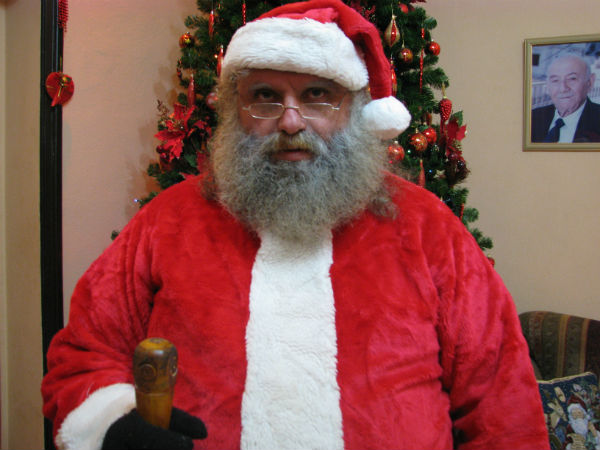 Then we were off to the college. I was invited to join, despite the virtual lack of room in the car. On the way, Nicola told me of how he became what he is.

26 years ago, right before Christmas, when Nicola was still an atheist, childless photographer, he entertained some family members in his native village of Abu Snan. A cousin suggested that he do the same to poor families in the area. On the first visit to such a family, the mother blessed Nicola that he should be a proud father soon. His first born arrived precisely a year later, on January 6th, which is Orthodox Christmas. Nicola, aptly named and already bearded, saw the sign and followed.

He hands out about 3,000 presents each year and never takes money. When money is forced on him, he spends it on presents. He did the Santa rounds around Bethlehem during periods of IDF-imposed curfew, supported by members of the church who enjoyed immunity. Everyone in Haifa knows him as “Papa Noel”. He never gets sick of “Jingle Bells”. It’s his ring tone and it’s what played on the car system the entire way to Afula.

We got to the college a bit early and had a smoke outside with the organizers. Then it was time for Ho ho hos. Grown-up parties” are not Nicola’s favorite, but he promised to come, so he did. The College’s “Holiday of Holiday’s” party attracted mainly Arabic-speaking students, and they were quite receptive. Christmas is no stranger here, only footsteps away from the valley’s famed kibbutzim, which are known as the very fountains of Israeliana. It is no stranger right at Geoff’s doorstep, and only meters away from my heart. 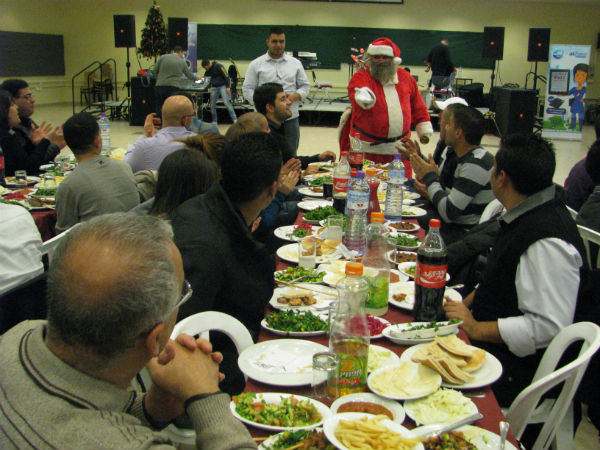