Friday’s arson was a terrorist attack familiar to the likes of ISIL. Now is the time for ideas; condemnations aren’t enough. The question is not only what was said that led to the murder, but what we did not say. 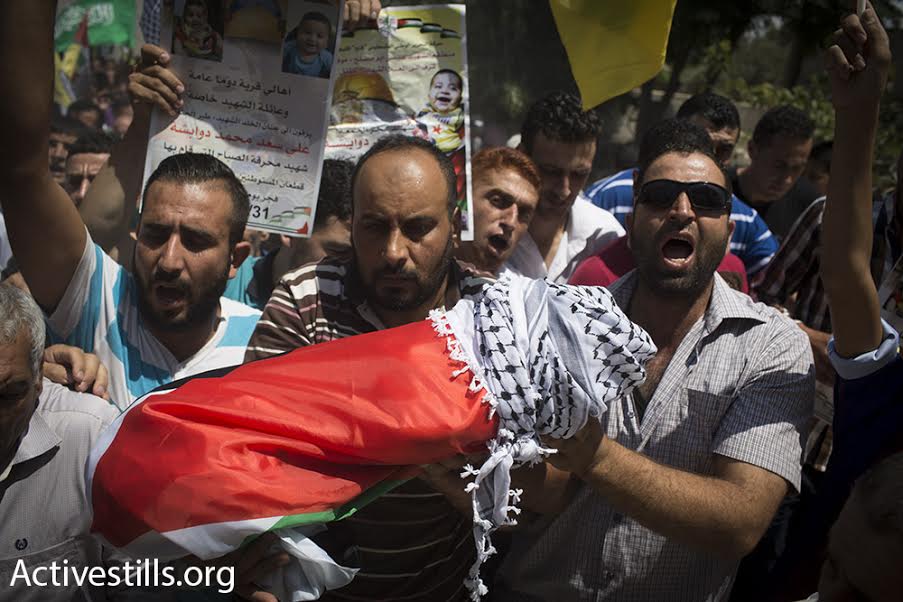 Palestinians in the West Bank village of Duma carry the body of 18-month-old Ali Saad Dawabshe who was slain in an arson attack by Jewish extremists, July 31, 2015. (Oren Ziv/Activestills.org)

Perhaps if I were a better Jew, I would fast today. With every such attack by “religious” people, the wound within Judaism grows. Last summer, after Muhammad Abu Khdeir was burned alive, Rabbi Israel Maimran told me: “I am ill.”

At this moment, we condemn and let the police do the talking. But perhaps the police, and even the Shin Bet, cannot help us heal this wound. They are too little, too late. Even condemnations do not suffice.

Like in cases of domestic murders, we pass the issue onto the police. To my knowledge, they are fairly helpless. They can look for the perpetrators, use D.N.A. samples to reveal their identities — but this is not enough.

When the world battled malaria, we did not chase after every single mosquito. We must find the swamp from which they originate and dry it up. On top of this dried swamp we can establish a town based on environmentally friendly principles, which will allow us to forget that there was ever a swamp there to begin with.

In our case it seems that, first and foremost, the swamp is full of the inciters. Our next phase must be to directed against those who choose to remain silent. Friday’s arson is a terrorist attack against Arabs, but in terms of our lives here in Israel, it is more like ISIL, al-Qaida and Hamas.

We must resist the easy solutions. Claims of “I told you so, it’s those religious people,” do not suffice. Perhaps the job of the believers is to explain that these are not religious people, but rather those who besmirch God’s name.

Furthermore, we must not use this tragedy as payback against the Right. There is a fierce battle going on between the Right and Left in Israel, and it is important to make a distinction between stances one doesn’t agree with and stances that are beyond the pale.

Now is the time for ideas. Condemnations aren’t enough. The right-wing spiritual-political leadership (and perhaps that of the Left as well) must come together and take a good look at itself. The question is not only what was said that — indirectly or directly — led to the murder, but what we did not say. How can it be that we didn’t change the discourse altogether?

Rabbi Froman, who lived in the West Bank settlement Tekoa, started something important here. Today we understand that Froman wasn’t some crazy, out-of-touch rabbi. Or perhaps now we understand that out-of-touch dreamers can solve what the army or the air force cannot. Meetings between liberal Jews and moderate Muslims give us hope, but they are not enough.

No, it is not enough to say that Arabs are also humans. We need to change the whole program. Religious practices must change. We must go back to the roots, to revisit the meaning behind the concept that God is one.

Dr. Meir Buzaglo is a professor of philosophy at the Hebrew University in Jerusalem. This article was first published in Hebrew on Haokets.