By: Shiraz Grinbaum/Activestills & Physicians For Human Rights-Israel, special thanks to Hiba Amara 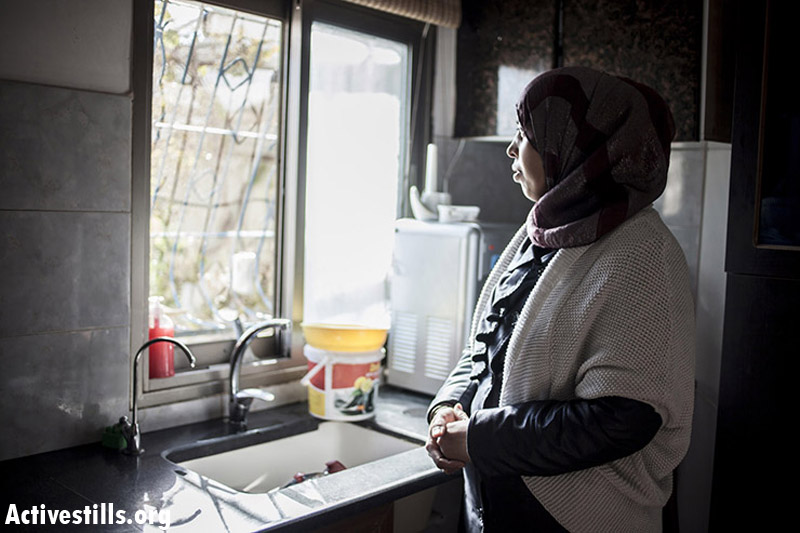 One of the fundamental rights to which a citizen is entitled is the right to marry and build a family in her or his own state. In practice, any person who marries an Israeli citizen is entitled to begin a procedure that will eventually lead to their recognition as a resident or a citizen of the state.

This right was honored, in general, until just over a decade ago. In May 2002, at the height of the Second Intifada, the Israeli government decided to freeze this procedure for residents of areas governed by the Palestinian Authority who had married Israeli citizens. This decision initially took the shape of a temporary provision, and was backed by security arguments. In 2003, the order was anchored in an amendment to the “Citizenship and Entry into Israel (Temporary Provision),” and is subject to annual renewal. Over the years, the law was also extended to cover citizens of Syria, Lebanon, Iraq and Iran, all of which are defined as enemy states.

After coming under strong criticism, which included appeals to Israel’s High Court of Justice, the law was amended in 2005. The amendment kept the overall denial of residential status in place, but granted women over 25 and men over 35 who married Israeli citizens permission to obtain a permit to stay in Israel, on the condition that they would not be deemed a criminal or security risk. The amendment, while reducing the scope of the population affected by the law, is racist in character.

It is estimated that the amendment to the Citizenship Law has so far impacted 20,000 married couples, by leaving one person without a citizenship or residency status. The affected individuals are denied the right to health care, social security and a dignified life. The following short testimonies are told by the women whose lives are affected daily by the amendment to the Citizenship Law. 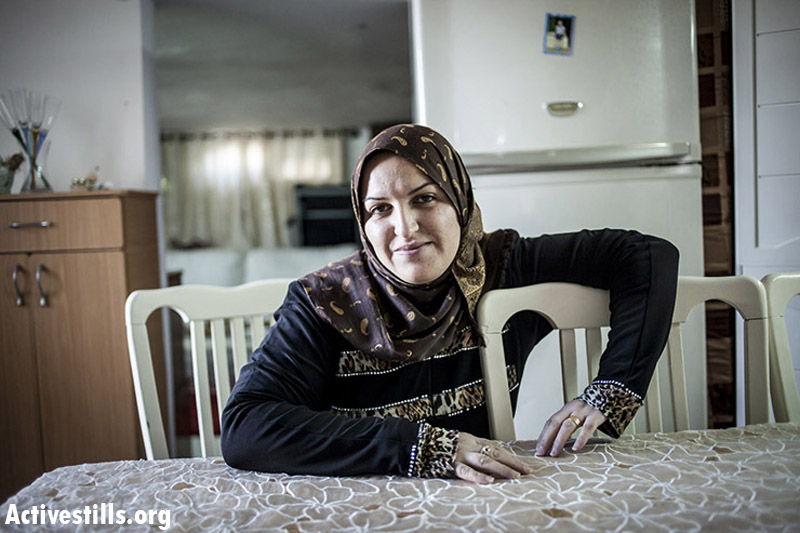 Reem Bedran: “The sound of the raindrops came at the same time as a knock on the door. I rushed to open the door for the person I had been waiting for so long. He had come to ask for my hand in marriage. We sat together for the very first time, and started building our dreams. My fiancé has a Palestinian ID card. Apparently this is a big crime, big enough to stop him from coming to the house of his fiancée. People from opposite sides of the Green Line are afraid to get closer to one another because of all the arbitrary penalties and the money that they will be forced to pay if the authorities find them living together.

“On our joyous wedding day, the day on which our dreams came true, the Israeli interior minister was also celebrating – he celebrated the freezing of the Family Unification Law. This is very ironic. We used to think that there was nobody on earth but us, and now we find out that we are the ones who do not really exist.” 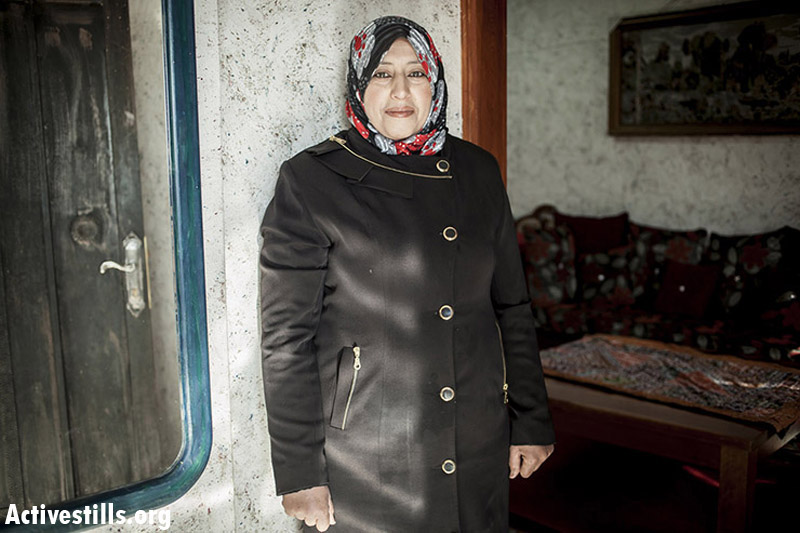 Basma Qibha: “We were about to pass the checkpoint, but the soldiers detained me for interrogation. They treated me as if I had been charged with a crime even though I was nine months pregnant. They put me into a cell and my children were very frightened. After seven hours I fainted and they called an ambulance to take me to the medical center.” 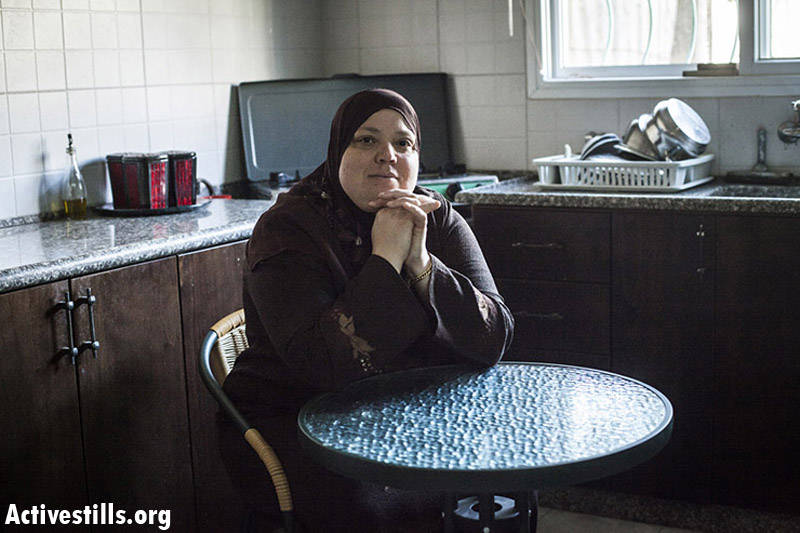 Laila Ghanem: “I was married 16 years ago. Ten years ago I was given a permit to stay [in Israel]. I spent the years having exhausting arguments with the Interior Ministry, with the law and with society around me. I renew my permit every year – that piece of paper that gives me the right to be with my husband and to live in my home.

It was particularly difficult when I heard that my mother was dying in hospital. I deliberated whether I should go and be with her or stay and care for my sick husband. Because if I were to go visit my sick mother, maybe they would not let me return, but if I stayed and something would happen to her, I would never forgive myself.” 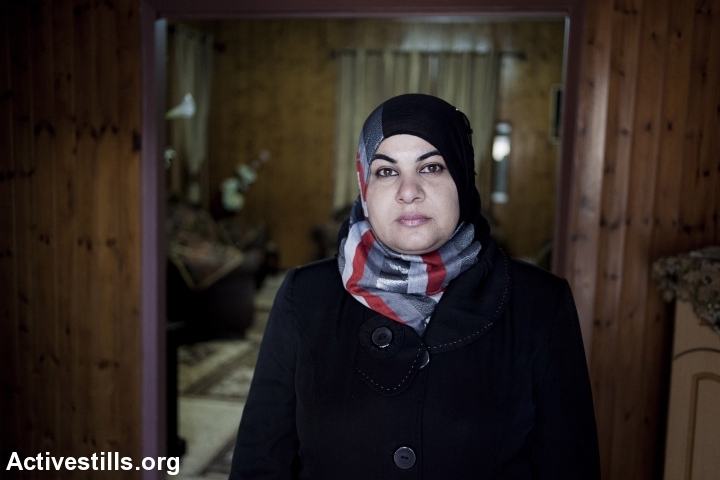 Jawahir Nassar: “The incursion happened in 2002. I was a mother of two small children and in the third month of pregnancy. It was hot. My husband lived on his own in Atil and I lived in Jatt with the children. My husband did not have a permit to live with us.

“Because of the incursion into Atil we could not visit each other. I waited patiently for the incursion to be over but it didn’t end. After a month there was still no solution. I decided to visit my husband regardless of the situation. God wanted me and my children to make it there in peace. When we entered the house, it was a huge surprise for my husband.” 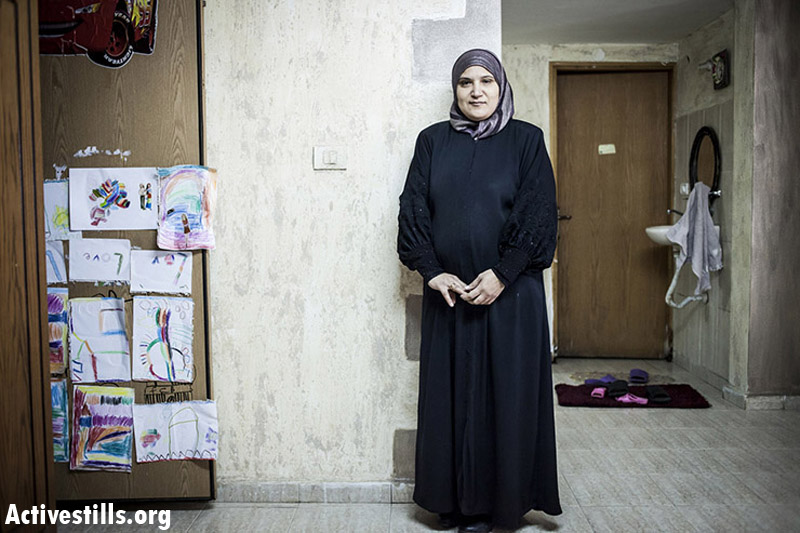 Umayya Badran: “I kept going, fighting the tears that would betray my weakness. But should I fight them? Should I keep telling myself that I am strong, that I won’t break? I thought: why is this happening to me? Have I chosen the wrong partner for my life? Maybe I should not have married him, my husband from the West Bank?” 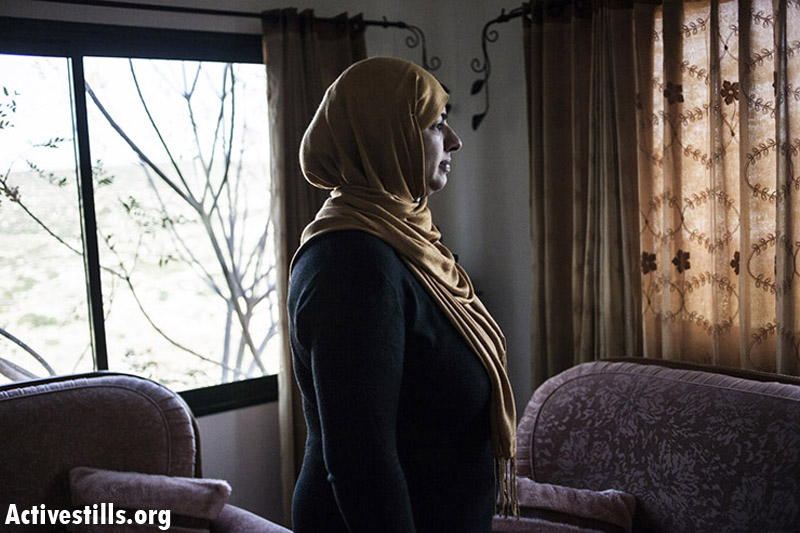 Nabila Qebha: “It was during the holidays, in September 2009. We went to visit my husband’s sister and to celebrate the holiday. It was a very calm morning and everybody was talking about the fact that there were no soldiers in the village.

It was a very hot day. To our surprise, we found a tank and a group of soldiers at the entrance to the village. Children, old people, everyone were waiting in the hills. I was with my family, with my daughter Balsam, who was seven months old. The soldiers would not let us into the village, which was just a few meters away from us.

“I walked up the hill and looked for a quiet place to nurse my daughter, who cried because she was hungry. But I had no milk. I waited patiently as long as I could, and then I went down the hill confidently with my crying baby. I stood in front of the armed soldiers. Everybody shouted at me that I should not go to them and get into trouble, but I did not listen. I stood in front of the soldiers and asked them to open the gate for me, because my daughter would die otherwise. They refused, and started making fun of me, laughing at me. But I asked, begged, and even shouted. In the end they allowed me and my daughter to go in, but without the rest of the family. I went through the gate and did not look back. One of the women ran towards me, held my hand, and together we walked into the village.”

For more information on the upcoming Physicians for Human Rights-Israel conference.