One activist’s diary of the arrests and violence that Israeli police used against Palestinian protesters in East Jerusalem on Nakba Day, 2013. A few dozen Palestinians march down Bab A-Zahara Street with a police van behind them, they head toward Damascus Gate for the Annual commemoration of the Nakba. Police cavalry pass the marchers, turn around, block the sidewalk on which the protesters are marching and start galloping towards them. Another line of border policeman prevents those who managed to pass from walking toward Damascus Gate, but they’re too late, half the protest is already at Damascus Gate.

About 200 hundred Palestinians are chanting on the stairs in front of Damascus Gate when we hear yelling from the road. Half-a-dozen policemen gather around a Palestinian man standing on an elevated part of the sidewalk who is refusing to move. A policeman holds his hand and tells him he’s arrested. The man doesn’t resist, but doesn’t move either. Four or five border policemen surround him from all sides, grab him, punch him – and punch him. A border policewoman reaches over a low fence and punches him again and again, just because she can. The man is brought down to the ground; a policeman sits on his head and yells, “turn around onto your stomach!” The policeman next to me laughs and says, “why do they need so many policeman for one man?” The police push away everyone gathered around him, including photographers, using the police horses. I find myself squashed between a horse and the low fence. When the horse moves and I hold my aching back, a policeman comes to me and says, “you should really be more careful.” 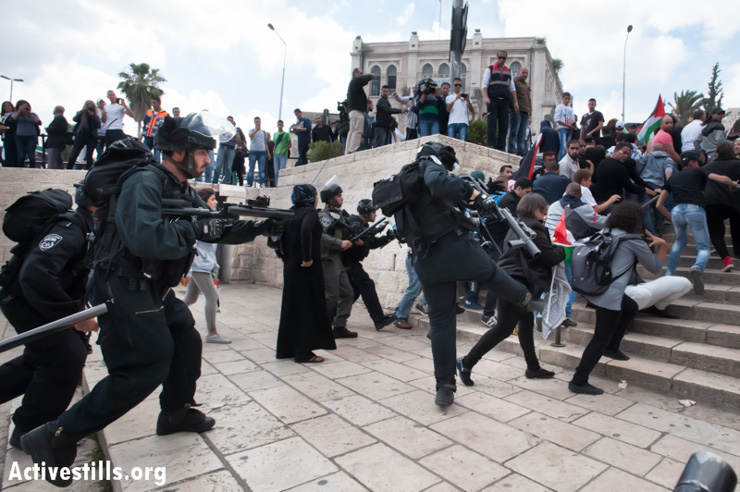 An Israeli policeman kicks a fleeing Palestinian woman as riot forces charge into crowds during Nakba Day protests at Damascus Gate, East Jerusalem, May 15, 2013. The Nakba, literally, the “catastrophe”, names the massive deportation of more then 700,000 Palestinian, made refugees and driven out of what became the State of Israel in 1948. (Photo by: Ryan Rodrick Beiler/Activestills.org)

The protest tries to enter the Old City, but a line of riot policeman stand there blocking the way. The protest turns to march back up on the wide sidewalk of Bab A-Zahara along the walls of the Old City but police block this path as well. A young Palestinian is trying to walk down the stairs, slips and falls. The people around him try to catch him on the way down, including myself. Medics come running, I move aside, look at my hand and see his blood. Second injury of the day.

The policemen try to push us back from all directions to in no direction. They run into the crowd swinging their batons at people’s legs, their fists at people’s faces, pulling and pushing. A young Palestinian man selling something tries to quickly pack everything up as the policeman yells at him to move, and pushes him. A young Palestinian woman is being pushed and pulled next to me. I try to stand between her and the policeman but there are so many of them. I feel my hair pulled back, a hand on me, and I’m on my back, on the ground. I get back up and run up the stairs again; a young Palestinian is with his back against the wall, he is being handcuffed and they are still kicking him. A spraying sound and we all start coughing, including the policemen. Pepper spray. I can see the medics running in to where the Palestinian girl from before is now, still surrounded by policeman. They manage to lift her and take her away to safety. 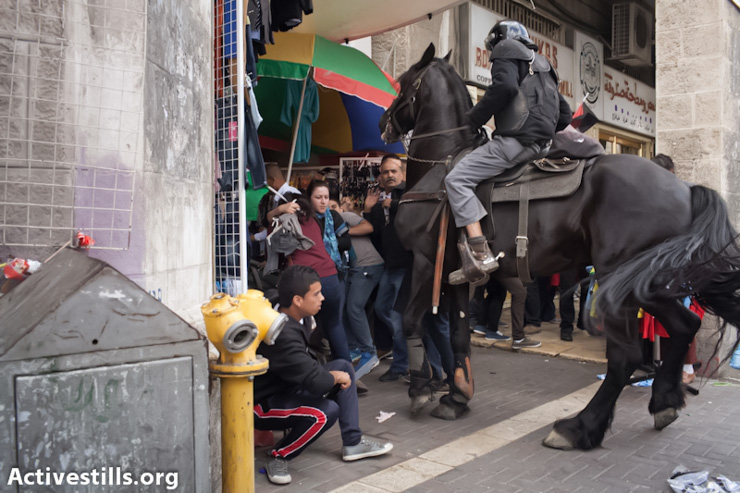 Water cannons arrive. Everything is wet. A soaking-wet cameraman tries to protect his camera, as his friends lead him away from the ‘line of water. 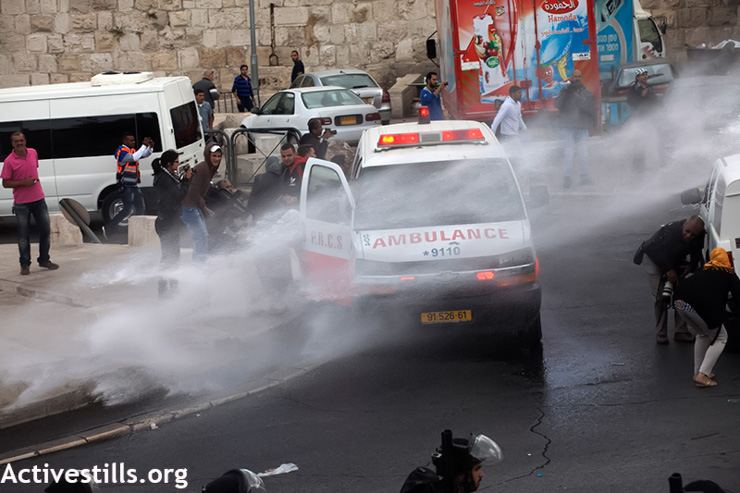 People running; six or seven border policemen run after them with their guns pointed straight at us. A young Palestinian woman finds herself alone next to them. One of them is pointing his gun right at her from three meters away.

Up the road next to one of the Palestinian central bus stations, the police horse riders play a game – they gallop into the station that is laid out around a building, circling it from both directions. Stones are thrown at them, they call in the infantry, border policemen run in shooting sound bombs, tear gas, sponge bullets and grab people to arrest them. The horses stand by the fence on the side by pushing into smaller and smaller enclaves against the walls.

Damascus Gate is mostly empty, and soaking wet. The two water cannons, one on each side of the road, turn to the already wet and mostly empty beginning of Damascus Road. A falafel stand is still open; they spray it completely. One table of Ca’ack bread is still visible, they spray it as the owner screams at them, “Why?!”. A number 74 Palestinian bus comes by, and it’s windows are completely sprayed.

Dozens of policemen come running in suddenly. Next to the falafel stand, they grab some people. Some were running from them, some were just standing there in between the stands, seeking shelter from the water cannons. I try to get closer but there’s a barrel of a gun pointed straight to my face and behind it a border policeman with a dark look in his eyes. I walk back and then find my way through. There’s a shoe on the floor, I pick it up and try to get through to the Palestinian on the floor beside me, surrounded by policemen beating him up. He has both his shoes on, so I move to the next one. Yes! He’s missing a shoe. The border policeman next to me pushes me back so I tell him I just want to give the man his shoe, and he’s so confused he does nothing. I get close to him, and put his shoe back on while two policemen hold him because he can’t really stand steadily at this point. I see a stream, not drops, but a stream of blood running down from his nose, blending with water on the soaked floor. I get pushed back. I yell at them, “It’s his shoe! It’s the market. You’re in their city!” I feel a hand on my throat, can’t talk and find myself outside of the crowd of policeman. I walk away and feel that my hands are wet; I look down and they’re full of blood, as are my trousers. It’s not mine. An American tourist stands next to me and picks something up from the ground. “It’s a sound bomb,” I tell him. “How often do they throw these here?”, he asks, and I stop to explain to him what happened today. He lifts his video camera. “That’s what occupation looks like,” I tell him as I run to the other side of the road where the water cannons start shooting again.

A parked police car gets stoned: once, twice. A policeman jumps into it, makes a U-turn to where the stones came from, jumps out of the car and starts running like crazy with a tazer gun pointed ahead.

I’m sitting in a bus. The adrenalin fades. I can start feeling my blood boiling hot, pumping to all the bruises. From the window I can see another chase in the bus station, I don’t know if they caught who they were chasing in the end, or someone else, or anyone at all. At the end of this, I can go home. But the dozens of people arrested can’t, some who were probably hospitalized can. But much more importantly, this is happening in the biggest market in the biggest Palestinian city. For Palestinians this is reality, not something you can choose to leave and go back home. I take my privilege and go home.