The Tahhan brothers refuse to give up on their neighborhood, or their city. 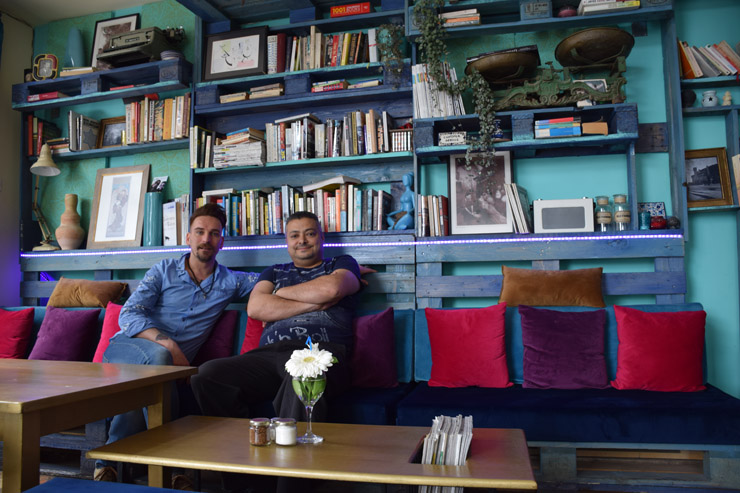 Opening a café is a risky endeavor anywhere. Doing so in East Jerusalem is even riskier. Just as Café Sarwa opened its doors for the first time in October 2015 the current wave of violence was starting on the streets of East Jerusalem, not that there was a shortage of political and economic challenges development in the occupied part of the city before that. The story of Café Sarwa is the story of a couple of young entrepreneurs fighting the cultural and economic abandonment of their neighborhood, and refusing to give up on their city.

When it comes to gastronomy, the East Jerusalem neighborhoods of Sheikh Jarrah and the Old City mostly offer hotel restaurants, shisha bars and plenty of street food like falafel, and kebab places that mostly target tourists. There’s not much in the direction of urban, hip places to hang out. Only a few, like the Educational Bookshop in Sheikh Jarrah refuse to fit that pattern. Since 2009 the bookstore and café has attracted young internationals, Palestinians and Israelis who come to read a book, work on their laptops, have a coffee or meet up with colleagues. Now, just up the road on Salah e-Din Street, the Sarwa Café is trying something similar, but with more of a focus on food, atmosphere and interior design.

Muhannad Tahhan’s vision for the Sarwa is a mix of Western and Middle Eastern influences, creating a modern café, you are more likely to imagine in Berlin or Tel Aviv. Huge and bright windows illuminate the entire place, velvet lounge sofas sit opposite a dark wooden bar, and temporary exhibitions of local and international art hang on the walls. The place offers Wi-Fi, pretty good coffee, selected wines and beers and a variety of Western and Palestinian dishes. And because it’s 2016, the food comes also in vegan and organic varieties. Tahhan makes his idea sound simple: “I wanted to create a relaxed and cozy space for locals and internationals, where they can spend a few hours and forget about the things that separate us.” Nothing could be more difficult.

“The situation can change every day,” Tahhan says. “It’s unpredictable. No one can say what will happen next week.” The political situation and economic pressure go hand in hand, Tahhan’s neighbor and friend Stelios Ode explains: “People say Israel is the start-up nation, but that doesn’t apply to East Jerusalem. For us it´s hard to find investors, to get permits, to attract customers.”

To say that creating something new in East Jerusalem is challenging for Palestinians would be an understatement. Land prices keep increasing, available space is constantly shrinking, and getting permits for new construction and extensions on existing structures is almost impossible. New businesses in old buildings must install a backdoor, handicapped bathrooms, and meet a minimum of square meters. Most places cannot fulfill those requirements, not to mention being able to afford the required permits if they are even approved. The lack of infrastructure makes it even harder. The Jerusalem municipality spends only about 10 percent of its budget on the Palestinian neighborhoods both inside and outside the Old City that comprise East Jerusalem.

The story of the Café Sarwa is also the story of the Tahhan family. The parents were born inside the Old City, as were as Muhannad and his brothers. In 1962 his father, Khamis Tahhan, bought a huge corner-building outside of the Old City, on the corner of Salah e-Din Street and Ali Iben Abu Taleb Street, between the East Jerusalem neighborhoods of Wadi Joz and Sheikh Jarrah. He opened the “Kings Travel Agency” and for some decades it was quite a good business — until Palestinian travel agencies lost their customers during the Second Intifada in the early 2000s. Travel agencies across Israel suffered, but while Israeli travel agencies were compensated by the state, Palestinian-owned agencies were not. The brothers tried to save the family business by opening a café inside the travel agency, then only a café, but they had no real vision and failed a number of times.

When their father died in 2014, the Tahhan brothers started going through his belongings. An old typewriter. His books. Old maps, travel pamphlets and other artifacts of his business travels through Jordan, Syria and Lebanon. “He was an old school cosmopolite,” Tahhan says, “and a political idealist.” It was in his memory and ideals that the brothers found the concept for their new café.

At that time the Tahhans’ crossed paths with German bar manager and interior designer Ron Kutzner. Kutzner moved from Berlin to East Jerusalem to be with his partner, Tahhans neighbor Stelios Ode, four years ago. Ode introduced them and it didn’t take long before they joined forces to create the Sarwa, merging their ideas of what a modern fusion café could and should be. “We agreed that we wanted something environmental — like recycled materials along with antique furniture we found in Ramallah and Hebron,” Tahhan says. The furniture from Hebron didn’t work out, but they stuck with the idea of mixing old and new furniture and decorating it with the Tahhan father’s nostalgia-inducing belongings — books, maps and old pictures from the Middle East.

Berlin meets East-Jerusalem? Both would love seeing the neighborhood develop into a place where people want to hang out. But that takes time. A lot of time. Is it worth the effort? “We all were born in the Old City; we all work here in East Jerusalem. Elsewhere it might be easier but this is our hood,” Ode says. When Kutzner moved to East Jerusalem a few years ago, he had no idea what awaited him, he admits. “I just followed my partner to live with him. And then I got excited about getting the chance to design the Sarwa Café and to create a modern, hip place,” Kutzner says. But today, six after months after the café opened its doors, he exudes at least a little disappointment that the impact sought is still elusive. “Maybe I was naïve,” he says. “It takes time,” Tahhan shoots back.

Still, not too many people find their way to the new café these days. Most young Palestinians looking to have a drink or two still prefer going to West Jerusalem’s downtown. “Let´s face it. East Jerusalem is still a very conservative neighborhood. Most of the young people here don’t want to be seen by their neighbors hanging out,” Ode explains. The other reason is of course the political situation. The intermittent violence at Damascus Gate has slowed the flow of international visitors  and Jewish Israelis who might otherwise venture into the Palestinian half of the city.

“It’s hard to get the locals here into their own neighborhood. But there are also plenty of young Arabs and also Israelis who would love to see this neighborhood become ‘cool’,” Ode says. “When I was a teenager,” the 35-year-old Palestinian man continues, “this neighborhood was boring. When I wanted to go out, I went to Tel Aviv. Also we were told not to hang out with Jews. But today the 20-somethings are more open and intercultural, although the current situation threatens to ruin that development.”

But even with the current violence and the invisible — and visible — divides that normally keep people from West and East Jerusalem apart, Sarwa has also had encouraging moments. This January they hosted an exhibition of Palestinian artists from across Palestine, including East Jerusalem. The event attracted attention. “Suddenly I saw people here I didn’t even know existed. Arab Hipsters from around, sitting with their laptops having a coffee,” Kutzner says.

Of course, some young people sitting in a café typing away on their laptops probably doesn’t represent momentum toward peace. But still, something is changing on one corner in East Jerusalem. And next year Tahan wants to reopen the Kings Travel Agency — once run by his father —in hope that better days are still to come. Because for the Tahhan brothers, giving up on their neighborhood is not an option.

Correction:
A previous version of this article mistakenly stated that Israeli artists took part in an exhibition at Cafe Sarwa, and that the exhibition was affiliated with the Bezalel Academy of Arts and Design. A majority of the Palestinian artists, in fact, were not permitted to attend their own exhibition, the organizers say. We apologize for the mistake.