With a discriminatory system that includes two separate legal systems, what is a Palestinian supposed to answer when he’s asked if Jews don’t care what happens to anyone but their own kind? The ADL’s world anti-Semitism survey presents a distorted view of the world. 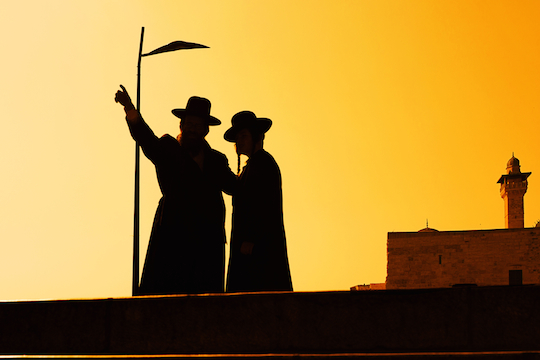 The Anti-Defamation League (ADL) – a Jewish-American organization whose goal is to combat anti-Semitism – and in practice, to promote Israeli hasbara – published a worldwide survey on anti-Semitism last week. The survey is unprecedented in its scope (53,100 people were surveyed in 102 countries) and purports to establish a reliable database on global anti-Semitism.

In practice, the survey seeks to establish an objective “truth” according to scientific standards vis-a-vis public discourse and the educational system, for journalists, policymakers, international institutions and more. The power to determine the “truth” is political, one that invites a certain suspicion – especially when it comes from a political body affiliated with the Israeli Right.

The survey’s authors stood before the challenge of giving the term “anti-Semitism” an operational definition: that is, to translate an ambiguous term into precise, measurable criteria. This is how they arrived at their list of 11 statements with which respondents were asked to agree or disagree. The statements included: “Jews think they are better than other people”; “Jews have too much control over the global media”; and “Jews still talk too much about what happened to them in the Holocaust.” Answering affirmatively to six of the 11 questions bestows upon the respondent the title of “anti-Semite.”

Surprisingly, the Palestinians tended to answer affirmatively to declarations such as, “Jews have too much power in the business world.” The fact that Palestinians are a captive market to the Israeli economy – their economic development is critically limited by Israel, as enshrined in the Paris Protocols of the Oslo accords – is of no relevance to the ADL. 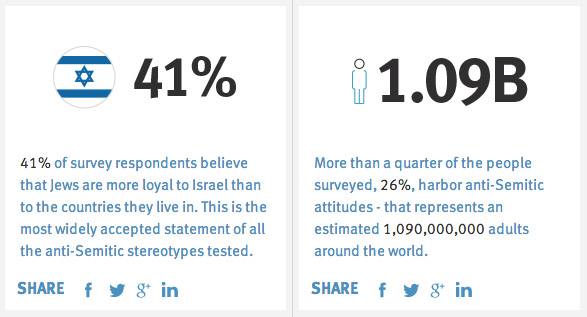 Even Israel’s frequent use of the Holocaust as a way to fend off criticism of the occupation should not stop Palestinians from wanting to talk about Jews in the Holocaust. That is, if they want to be considered part of the enlightened, non anti-Semitic world. Even the thoughtfulness and sensitivity of the Israeli army and the settlers – the Jews whom Palestinians meet on a day-to-day basis – did not prevent Palestinians from agreeing with the statement that, “Jews don’t care what happens to anyone but their own kind.” Even agreeing with the statement that, “people hate Jews because of the way Jews behave,” won the Palestinians some anti-Semitism points.

It’s not that the behavior of a certain cultural group – horrific, violent and criminal as it may be – excuses stereotypes based on ethnicity, religion or nationality. The point is that it is impossible to examine issues of anti-Semitism, or racism in general, when it is disconnected from its political, economic, social and cultural context.

The ADL’s insistence on conducting research in a political vacuum is apparent in the sense of entitlement among American Jews who feel they can judge anti-Semitism in other countries without taking into account the various ways Jews in those countries understand anti-Semitism. The pretension of examining the meaning that people attribute to Jews in a way that is disconnected from the world of meanings in which they live, fails on an intellectual and research-based level, not to mention that it is politically manipulative.

What does anti-Semitism have to do with us?

The absence of Israel from the survey is particularly evident. It is possible that its findings would have forced the authors to have a deeper conversation on the essence and expressions of anti-Semitism. It is possible that it would invite questions more troubling than pointing one’s finger toward the ultimate Other – the Arabs and the Muslims. The ADL’s rhetorical laundering, such as “anti-Semitism as a global phenomenon,” does not prevent the survey from conforming to the wide-spread demonization of the West’s Other – the Muslim – as evil facing Western, enlightened society. The reduction of anti-Semitism into a collection of stereotypes constitutes a stereotypical — and superficial — outlook of anti-Semitism and racism in general.

People on the left in Israel tend to think of contemporary anti-Semitism as a tool of silencing criticism of the occupation. The cynical use of anti-Semitism does caus the more critical elements in the population to leave this important issue for conservatives with a right-wing agenda. But even worse: in Israel today there are no critical tools for analyzing and discussing anti-Semitism, especially in its current form. However, the way in which Jewish identity, Jewish nationalism and Jews in general are seen in Israel is inextricable from the political reality – one that many of us seek to change.

Israel is characterized by a range of ideologies and practices that make Jewish identity exceptional. I’m talking about laws that create different legal and administrative categories for Jews, regarding military conscription due to their Jewishness, on burying the dead in different areas due to their Jewishness or non-Jewishness, on restricting the purchase of land and assets based on Jewish identity, and so on.

Foxman, head of the ADL, does not seem to dwell on the fact that Western Europeans have more knowledge of the history of the Holocaust since they, well, had a hand in the matter.

In addition, intellectuals and activists, Mizrahis and Palestinians (among them Ella Shohat, Aziza Khazzoom and Edward Said) described the racism from Ashkenazis toward Mizrahis as a reproduction of the racism Jews experienced from their non-Jewish neighbors in Europe. The Jews of eastern and central Europe, as people who were marked as East, as the Orient, projected that orientalization on Jews from Arab countries and the Middle East.

Thus we see a sequence of anti-Semitism that was tied historically, socially and geo-politically between different expressions of racism, Orientalism and colonial violence toward the Semitic groups – the “Other” of the West. All this, of course, does not bother the Anti Defamation League, which refrains from dealing critically with anti-Semitism and its roots, and sticks to a narrow and Eurocentric definition.

While critical media outlets, such as Mondoweiss, The Guardian, Bloomberg View and Amira Hass at Haaretz, have pointed out the methodological problems as well as the manipulative aspects of the survey, they won’t stop it from becoming a successful piece of propaganda. I suggest taking the survey as an invitation to deal with anti-Semitism critically – in a way that doesn’t fall in line with Orientalism, Islamophobia and the other foundations of modern racism.

Related:
No, Abe Foxman, America is not out to get the Jews
Dispelling modern myths of Muslim anti-Semitism

Read this article in Hebrew on “Local Call.”