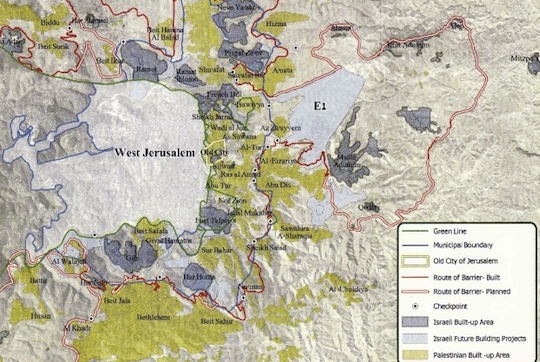 Until 1967, Beit Safafa was divided between Israeli-controlled West Jerusalem and the Jordanian-controlled West Bank. Train tracks ran through it along the 1949 Armistice Lines. When Israel occupied East Jerusalem, Beit Safafa came entirely under Israeli rule and despite what Israeli governments will tell you, it was not united, but rather torn apart once again: most of its residents became permanent residents, but a minority in the northern part received Israeli citizenship, instantly giving the same neighborhood’s population very different political rights.

Beit Safafa, which has a population of just under 10,000, is now facing it’s third major bisection, this time by a highway being constructed by Israel that will literally cut through the neighborhood. Highway 4, or the Begin Highway, is a Jerusalem ring road intended to create one continuous stretch of highway from the Gush Etzion settlement bloc south of the city to the Givat Ze’ev settlement bloc in the north.

It would ultimately link the West Bank’s two most controversial highways: the Tunnel Road connecting Gush Etzion to Jerusalem in the south and Road 443, a.k.a. the Apartheid Highway, which routes settler traffic north of the city to Tel Aviv while denying access to Palestinians. The width of the road planned to cut through the neighborhood ranges from 33 to 78 meters. Part of it will exist as a six-lane highway and other parts could have as many as 10-11 lanes.

According to Ir Amim, which has published an excellent fact sheet on the issue, the municipality has found a way to bypass the necessary procedures that require public inclusion, making it impossible for Beit Safafa residents to formally object to the plans. As Nir Hasson recently reported for Haaretz:

The road is based on a general plan dating from 23 years ago, that the courts decided was detailed enough to enable construction to start. Under Israeli law, you can get compensation only if you prove that a specifically approved plan caused you damage. In this case, the villagers would have to have appealed against the plan back in 1990.

On December 12, 2012, 15 Beit Safafa residents filed an administrative petition against the Jerusalem Municipality and its construction company, Moriah, which was rejected last week. They plan on appealing to the Supreme Court.

For weeks now, residents have been regularly holding protests at the construction site, which police have been dispersing with force. Residents have also complained of harassment and collective punishment by the authorities, for example stepping up fines for illegal construction and arresting residents for organizing labor strikes.

Yesterday (Friday), activists reported that police exerted excessive force, using stun grenades gas, tasers and pepper spray, violently arreesting eight people and injuring 10. One of the eight arrested is a minor who has since been released. The rest are still being held in Jerusalem’s Russian Compound. Here are several videos taken by protestors:

How can the Israeli regime really think building this highway in this manner on occupied Palestinian territory is safe for anyone? Is it really going to guarantee long-term security for Israeli Jews to safely and freely travel between Jerusalem and the settlements?

Does Israel really think it can unilaterally implement policies that violate human rights – not to mention the civil rights of its own residents and citizens – forever without paying the price?