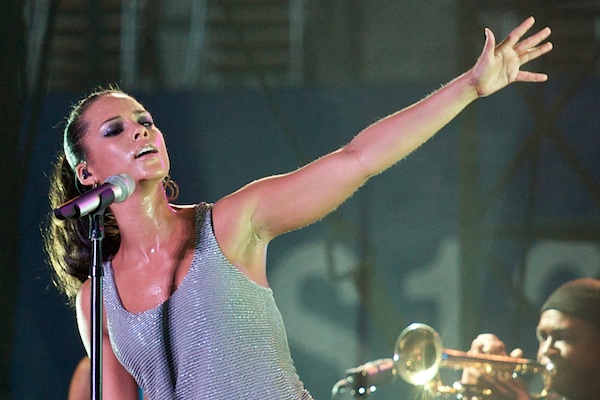 There seems to be a bit of a double standard in this country on the subject of BDS. For instance, we’re all supposed to be sneering in triumph over Alicia Keys’ decision to resist calls to cancel her Tel Aviv concert next month. No sane Israeli can support a boycott of this country, can he? Over what, the occupation? Out of the question.

But at the same time, no sane Israeli is supposed to oppose the UN sanctions on Iran, unless of course he thinks they’re too lenient or that they’re delaying the bombing of that country. For an Israeli to say he’s against the sanctions because they’re immoral, because they harm masses of innocent people – who’s ever heard of such a thing?

This is the Israeli mentality: Sanctions that cause massive, life-threatening medical and food shortages to the citizens of an enemy country are great, but a boycott that denies Alicia Keys’ local fans the chance to see her is evil. (I know the callousness toward the effect of the Iran sanctions isn’t limited to Israel, but that callousness combined with the steaming outrage over the merest symbolic boycott of this country – the stone-blind hypocrisy of that reaction – is what makes it distinctively Israeli.)

People will say: How can you compare sanctions on Iran to a boycott on Israel – Iran is a totalitarian, nightmarish country, an Islamic police state. That’s true, but that’s not why the sanctions are in place – they’re in place because Iran is en route to getting nuclear weapons, and the nuclear powers on the UN Security Council (egged on by Israel) do not have the right to wreak hell on the lives of Iranians because their regime wants a few nukes, too. Also, while Iran is a monstrous country for anyone who doesn’t toe the mullahs’ line, an incomparably worse violator of human rights than Israel, that doesn’t mean Israel is good, or morally immune from boycotts.

Let’s take a closer look at the effect of sanctions on Iran. From The Guardian in January:

Hundreds of thousands of Iranians with serious illnesses have been put at imminent risk by the unintended consequences of international sanctions, which have led to dire shortages of life-saving medicines such as chemotherapy drugs for cancer and bloodclotting agents for haemophiliacs.

From The Economist in October:

Six years ago, when America and Europe were putting in place the first raft of measures to press Iran to come clean over its nuclear ambitions, the talk was of “smart” sanctions. The West, it was stressed, had no quarrel with the Iranian people—only with a regime that seemed bent on getting a nuclear bomb, or at least the capacity for making one. Yet, as sanctions have become increasingly punitive in the face of Iran’s intransigence, it is ordinary Iranians who are paying the price.

On October 1st and 2nd Iran’s rial lost more than 25% of its value against the dollar. Since the end of last year it has depreciated by over 80%, most of that in just the past month. Despite subsidies intended to help the poor, prices for staples, such as milk, bread, rice, yogurt and vegetables, have at least doubled since the beginning of the year. Chicken has become so scarce that when scant supplies become available they prompt riots.

By contrast, no Israelis were going to die or even miss dessert if Alicia Keys didn’t play Tel Aviv, just like we’ll all survive Stephen Hawking’s no-show at Peres’s Presidential Conference this month.

And in the absence of any other foreign or domestic pressure on Israel to end its military dictatorship over the Palestinians, a boycott of this country is justified, while sanctions imposed by nuclear powers to prevent another country, rotten as it is, from going nuclear is not justified.

Sane or not, I wish Alicia Keys would have decided to pull out of her upcoming concert in Tel Aviv, and I hope to God somebody finds the decency to end the sanctions on Iran.

Related:
Stephen Hawking’s message to Israeli elites: The occupation has a price
On Alice Walker and cultural boycott: A debate
Could UNHRC’s settlement report put the ‘S’ back in BDS?