Three months ago, I would have told you that the Right will sweep the elections. But this election cycle has shown that people are looking for an alternative, and that the Left still has a lot of work to do.

Regardless of the results of Tuesday’s election, these last few months have signaled a positive change: a question mark, a reminder of summer 2011, a leftward turn.

When elections were announced three months ago, no one truly understood what they were about or why they were even necessary. Only few doubted that the next Knesset would look significantly different from the previous one, and it seemed that, one way or another, Benjamin Netanyahu would remain the prime minister. A Channel 10 poll published around that time showed that Likud would win 22 seats, Jewish Home would get 17, while both Yisrael Beiteinu and Kahlon would receive 12. All in all, a total of 63 seats for the Right, and that’s before taking into account the ultra-Orthodox parties. 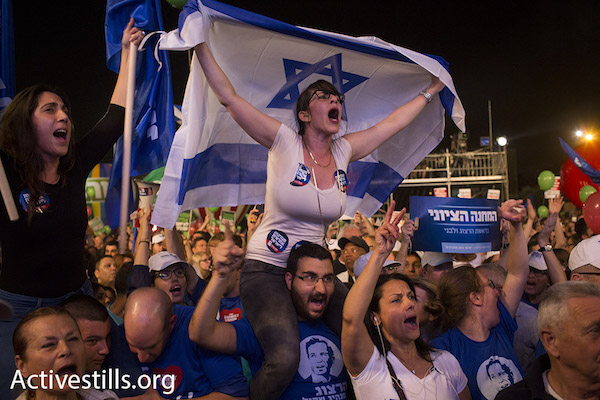 A wave of splits and unifications (Zionist Camp, Shas-Yachad, Yachad-Otzma Yehudit, The Joint List), Yisrael Beiteinu’s corruption scandal and the party primaries created a feeling of uncertainty, especially after delaying the launch of the campaigns, which got off to a start with bizarre videos and weak billboards.

But things are looking differently as we approach the finish line. Netanyahu may very well be declared Israel’s next prime minister, whether in a Right/ultra-Orthodox coalition or in a unity government with Zionist Camp. But this is no longer the only option. Likud is feeling the heat, and the entire right-wing camp is now putting out negative messages that offer no hope: the Iranian threat, refusing peace, incitement against Palestinian citizens of Israel (whose very democratic right to vote is seen as a threat, by the prime minister) and zero social justice. According to the polls, Bibi is no longer King, while Bennett — the rising star of the last few years — has been dealt a blow over his party’s outwardly homophobic platform and Liberman is coming close to not passing the election threshold that he himself called for.

It seems that the other parties, however, are making hopeful gains. The rise of Yair Lapid and Moshe Kahlon — both of whom are running on an economic ticket — is a sign that more voters are choosing a social agenda. Shas under Aryeh Deri has ditched the nationalist rhetoric of Eli Yishai (who now heads the Yachad party alongside Kahanist Baruch Marzel) in favor of a brilliant campaign focusing on “invisible” working class Israelis, which has adopted important aspects of the resurgent Mizrahi struggle of the past few years. Apart from individuals such as Tzipi Livni, Amos Yadlin and Manuel Trajtenberg, the Zionist Camp is younger, more leftist, socially-oriented and promises more than we have come to expect from the Labor Party.

The left-wing Meretz party, which is also at risk of not passing the threshold, is beginning to undergo a welcomed internal change, which includes new faces as well as adopting an agenda that is trying to reach out to the non-Ashekanzi periphery. And of course, the Joint List, which is based on an incredible cooperation inside the Palestinian public, and has succeeded (not without difficulties) in speaking directly and honestly to the Jewish public, offering it a partnership in the struggle for a real democracy. These parties has its own faults and complexities, but the winds of change are blowing through each and every one of them.

Building an alternative from the ground up

But despite the optimism, the next Knesset will not be an easy place. Any coalition will be dependent on medium-sized parties, who will constantly vie for power and can bring down the government at any given moment. Even now, every party — aside from Meretz and the Joint List — has not ruled out sitting in a government with Netanyahu. Furthermore, a right-wing or unity government could more easily come to fruition than a center-left government that would stick Lapid and Meretz with the ultra-Orthodox, or Kahlon with external support from the Joint List. 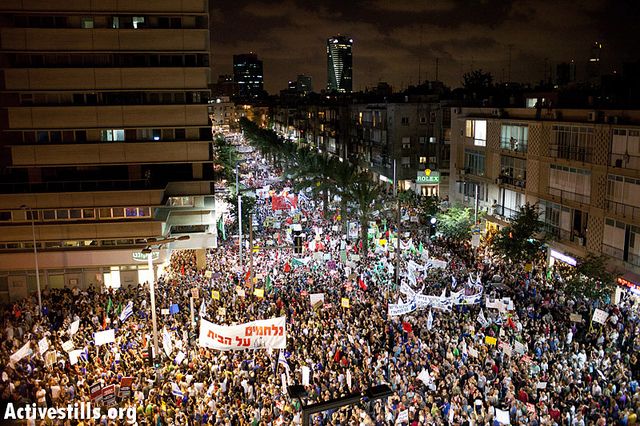 Hundreds of thousands of Israelis flood the streets during the 2011 summer protests. These elections prove that the spirit of that summer is still alive and well. (photo: Oren Ziv/Activestills.org)

And still, this has been a great election cycle. As we near the end, it seems that there is a possibility of an alternative to the Right. The dream of forming a political alliance between the Palestinians, the ultra-Orthodox and the Left seem like less of a fantasy now. The general consensus that the social protests of 2011 are dead and buried is being disproven in the streets, in the workplace and in political platforms on a daily basis. The public is interested in the political system — it better understands and is willing to criticize the connection between big money and politics — and one can only hope that the public will only continue to do so after the elections.

But our real task begins on the day after the results come in. While the Left must continue being involved in the political process, it must also seek to strengthen Jewish-Arab cooperation in both Israel and the occupied territories, it must help workers organize for better wages, stand behind campaigns for pubic housing, resist home demolitions, fight to end gender violence and the oppression of women, and more. These elections are a sign of the possibility of a new beginning. Our job is to make it happen.