When it comes to helping victims in far away countries (like Haiti and more), Israel does a great job. Not so great if you happen to be a Palestinian trying to flee the civil war in Syria.

The Times of Israel reports today that Palestinian President Mahmoud Abbas is giving a cold shoulder to his refugee brethren in Syria, who are under bombardment and suffering casualties as a result of the civil war: 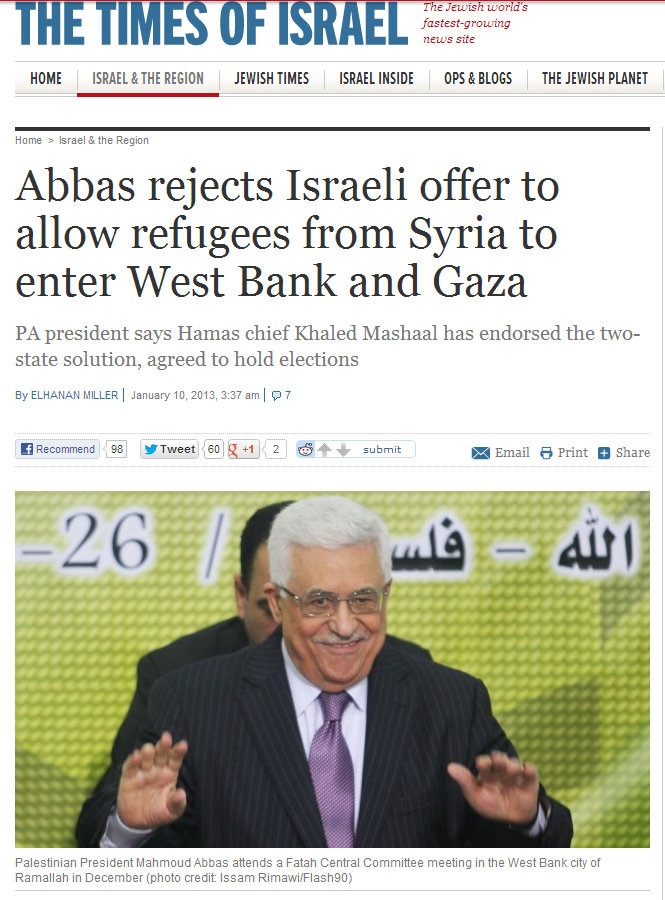 The TOI decided to write this headline, despite the fact that the true headline was written very clearly in the first paragraph (my bold):

“Palestinian Authority President Mahmoud Abbas rejected an Israeli offer to allow Palestinian refugees fleeing Syria to enter the Palestinian territories on condition that they forgo their “right of return” to Israel proper, Abbas told the Egyptian press on Wednesday evening.”

I have yet to read any Israeli official denying this, including the TOI item itself.

Now, first of all, anyone reading the press knows two things: 1) Abbas approached the UN weeks ago asking for its help on the issue; 2) UN Secretary General Ban Ki Moon has asked surrounding countries for assistance, including Israel. So, the word “offer” in the headline is also misleading, since it is not Israel that initiated an offer, but if anything, is now “agreeing” to a request already made – and with conditions.

But actually, the journalism of the TOI isn’t the story. The story is this: Humane Israel, the same Israel that boasts about how it sends field hospitals to quake disasters before everybody else, now sets conditions (and right on their own border, not thousands of miles away!) for refugees in physical danger of their lives.

The first thing that popped to my mind was how it sounded like a “deal with the devil.” “Sure, we’ll let you in, save your lives – but first, sign here on the dotted line…”

The comparison to that ‘deal with the devil,” who eventually gets the victim’s “soul,” could not be more appropriate considering that the right of return is one of the most cherished, valued principles a Palestinian refugee holds dear to their hearts. Even Abbas, who although said to Channel 2 that he “has no right to live in Safed,” could never agree to imposing such a ridiculous condition on other Palestinians.

If Israel wants to show any kind of humanity, it should let those people through without holding a virtual gun to their heads. God knows they’ve suffered enough already.