A visit to Birobidzhan, where Jewish autonomy hasn’t exactly worked out — and yet, the sign for Lenin Street is still written in Yiddish and public monuments commemorate Sholem Aleichem.

Last summer, after three months of teaching in Japan, I decided to return home to Montreal via Birobidzhan, in Russia’s Far East. The Jewish Autonomous Region was getting ready to celebrate its 80th anniversary, and I easily found people to host me.

Built by Jewish enthusiasts from a dozen countries including Argentina, Canada, France, the United States and British Palestine, Birobidzhan is conceptually akin to Israel, which also considers Jews as a nationality rather than a confession. But unlike the State of Israel, Birobidzhan was built on a true “land without a people” and did not have to displace anyone to make the Communist Jewish dream come true. This is one of the reasons an earlier plan to create a Jewish autonomous region in the Crimea, populated for thousands of years, was abandoned in favor of the Far East. Of course, most settlers came from within the Soviet Union, particularly from the Ukraine and Belorussia, where millions of Jews had been living for centuries. They wanted to contribute to the edification of socialism explicitly as Jews.

Two local Jews, cousins Sasha and Igor, met me at the Khabarovsk airport, the closest to Birobidzhan. Igor had recently returned from Israel after 17 years, two of which he spent in the military. 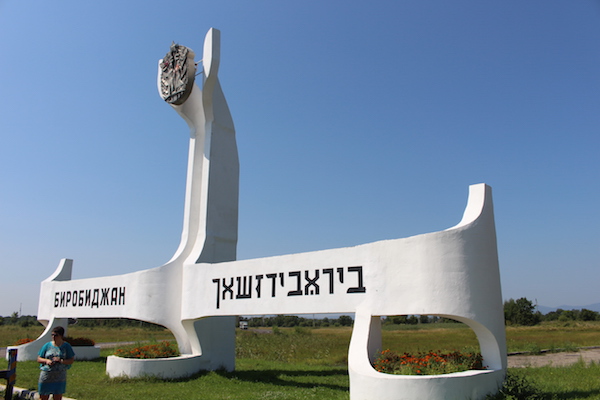 A sign marks the entrance to Birobidzhan. (Photo by Yakov Rabkin)

As we were approaching Birobidzhan, I noticed a white entrance arch with the name of the town spelled in Russian and Yiddish. Impressed by the appearance of Hebrew letters a few miles from the Russia-China border, I stopped the car to take pictures. It did not take me long to get accustomed to street signs in Yiddish, a menorah in front of the train station and a statue of a shofar-blowing Hasid in the middle of Lenin Street (also spelled in Yiddish). 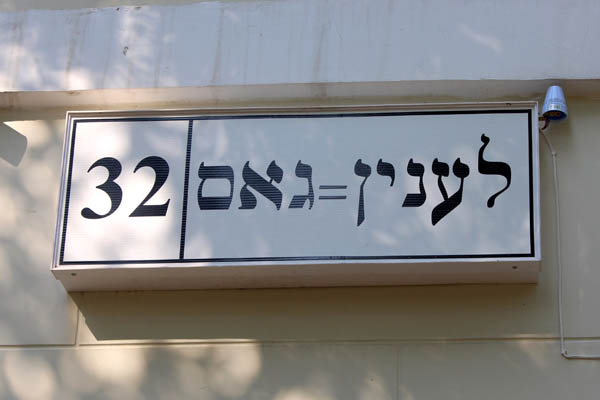 The sign for Lenin Street, in Yiddish. (Photo by Yakov Rabkin)

Unlike most Soviet towns, Lenin street is not the main thoroughfare in Birobidzhan; instead, the central street is Sholom Aleikhem Gas. A statue of the Yiddish writer presides over one of the main town squares. I later found myself at a concert where I heard a song Ulitsa Sholom Aleikhema, performed by a group directed by Naum Livant, local Jewish activist and accomplished musician.

Sasha’s and Igor’s grandparents were among the first settlers, members of the Young Communists’ League (Komsomol). They arrived in 1928 and began by building houses. Later they built factories. Many more Jews came not as starry-eyed enthusiasts but because they could no longer ensure their livelihoods in small trade and crafts. The former Pale of Jewish Settlement was heavily affected as the country embarked on a massive industrialization drive, which tolerated no private enterprise.

Jews never constituted more than one-fourth of the population of Birobidzhan, and today their share has shrunk a lot more. Emigration to Israel, often encouraged by the economic crisis of perestroika and an active campaign by Israel and its local agents, has depleted this Jewish community just as it has many others in the former Soviet Union. At one of the synagogues I saw leaflets recruiting new immigrants for Israel, even though, as the former deputy governor of the Jewish Autonomous Region Valery Gurevich later told me, there are more Jews returning from Israel than going there.

Jewish life continues with the usual passions and controversies. There are three synagogues in Birobidzhan. The main one situated in Lenin Gas is run by a Lubavitcher Hasid from Israel. It is well appointed, occupies an impressive building, between the administrative offices of the Jewish community on one side and a Jewish non-kosher café on the other.

While Yiddish is one of the official languages in Birobidzhan, the Israeli rabbi does not speak it. Nor did his predecessor, also a native of Israel. Unlike Lubavitch synagogues in Montreal or New York, the language of the synagogue service is Israeli Hebrew, rather than loishen koidesh, Biblical Hebrew with Yiddish inflection. Jewish ritual objects in the museum of the community are called by their Israeli names rather than old Yiddish ones. All this leads to a gradual Israelization of Jewish life that some Jews feel uneasy about.

The old synagogue Beth Teshuva is located in a blue wooden house emblazoned with a big mogen-dovid. It operates irregularly, and a flood recently damaged many of its rare books. Sasha showed me the old building before taking me to a nearby apartment that had been converted into a synagogue, Beth Ha-Zohar. 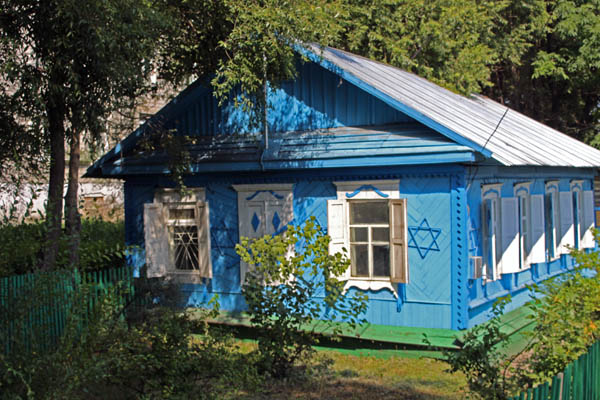 The Beth Teshuva synagogue in Birobidzhan. (Photo by Yakov Rabkin)

Sasha, Igor and the latter’s mother Rita are among the activists of the new synagogue, which puts more emphasis on spiritual growth than on ritual observance. None of the three synagogues has a minyan of observant Jews, which is not unusual in small towns of the former USSR. Oftentimes the rabbi is the only observant member of the congregation.

I welcomed the Sabbath with members of Beth Ha-Zohar, and over supper we talked about fundamental issues of Judaism that are infrequently lost in more established synagogues, such as divine justice or the meaning and effect of prayers. There was freshness and enthusiasm in their eager questioning of the visiting professor of Jewish studies from Montreal.

The mood was more formal during morning services at the main synagogue. There were a few older men and two young Jews in the process of becoming Lubavitchers. I was asked to read the haphtarah, and surprised the congregants with Moroccan tunes, which I had assimilated in the course of decades of attending services at Beth Yosef, founded in Montreal by Jews from Tangiers and Tetuán. At lunch I thoroughly enjoyed not only the conversation but also the kosher black bread I could only dream of during my three months in Tokyo. 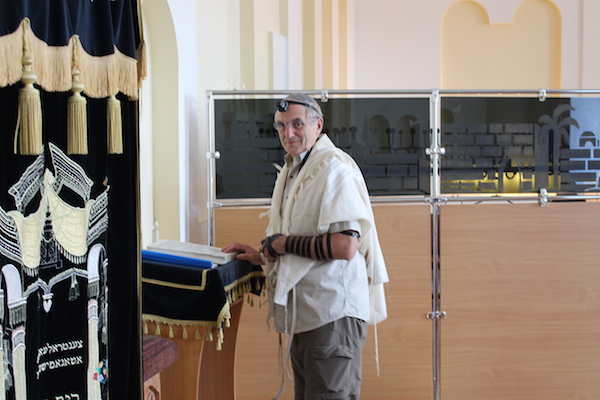 The author leading the morning service at the main synagogue.

The rabbi had to go back to the synagogue to conduct a tour of the Jewish museum for a group of law enforcement officers from around Russia’s Far East. I joined the visitors and, judging by their questions and comments, noticed their keen interest and sincere appreciation of Jewish life. A film about Birobidzhan by Marek Halter was recently broadcast on one of the main TV channels in Russia.

Later that day, I easily negotiated free entry to the local historical museum, explaining why I would not use money on the Sabbath. Sasha accompanied me around the museum, chatted with staff members who knew his grandparents, and helped me fill in gaps in my knowledge of Birobidzhan and its region. The museum offers detailed and balanced information, including the disastrous effects of the dismantlement of the Soviet Union on local economy.

A couple of days later Sasha took me on a bicycle tour of industrial decay. Birobidzhan used to be a major producer of agricultural machinery. The factory had its own polyclinic, a kindergarten and a club. All of this lies now in ruins, the factory stripped of anything valuable. A seemingly abandoned monument commemorates the death of several workers killed in an accident during the wild privatization years of the Yeltsin regime. The landscape is akin to images of war-ravaged factories blown up by the Nazis. 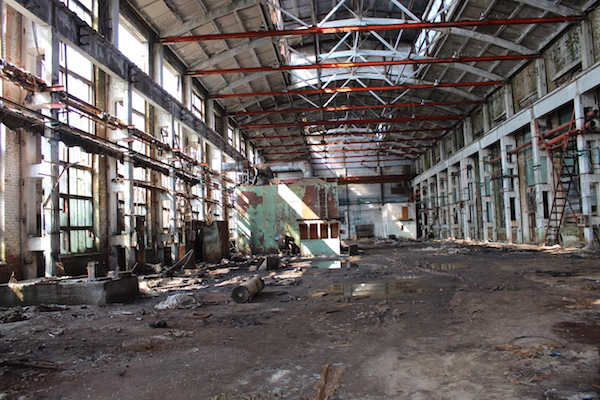 The agricultural machinery factory in Birobidzhan after privatization. (Photo by Yakov Rabkin)

Sasha took me to several other industrial sites standing padlocked. Elementary morality was destroyed alongside with physical plant, he said. Young people feel disoriented, have had no experience working in a productive capacity and often end up in petty crime. This is quite common across thousands of small towns in Russia where post-Soviet demodernization has taken its toll.

Since my book about Jewish opposition to Zionism was translated and published in Russian, my hosts asked me to give a lecture on the topic. It took place in the main synagogue and was attended by people of all ages. Some appeared familiar with the subject, noting that their parents and great-parents were ardent anti-Zionists. However, they knew less about religious opposition to the Zionist project, and the Q&A was lively and stimulating. Quite a few people in the audience had personal experience of life in Israel. There was none of the indignation the subject of Judaic anti-Zionism tends to provoke among Jewish audiences in North America.

The following day early in the morning, Sasha took me to the train station. The town was being adorned with flags and banners, invariably in Yiddish and in Russian, with Cyrillic letters stylized as if they were Hebrew. To the left of the train station I noticed a bronze statue of Tevye the milkhiker, the hero of one of Sholem Aleichem’s stories driving a horse-drawn carriage with his wife and their humble belongings. They may be leaving – or arriving in – Birobidzhan. The plaque on the pedestal says that the statue has been produced in, and donated by, a nearby town in China.

The author is professor of history at the University of Montreal. Among his recent books are A Threat from Within: a Century of Jewish opposition to Zionism (Macmillan/Zedbooks) and Comprendre l’État d’Israël (Écosociété).