A new Israeli-planned road, ostensibly meant to give the Cremisan Monastery access to Israel and Jerusalem, will cut off the Bethlehem-area village of al-Walaja from its lands. Its lands were taken and villagers displaced in first in 1948; in recent years Israel began completely surrounding it with the separation wall, taking even more land. Village resident Hisham Abu Ali is done being silent. 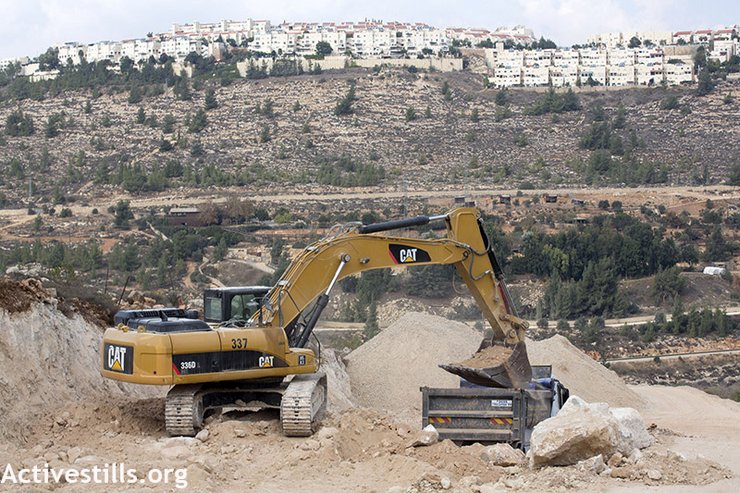 The Israeli settlement Gilo, illegal under international law, covers a nearby hillside as construction on a road ostensibly connecting the Cremisan Monastery to Jerusalem threatens to uproot olive trees belonging to Hisham Abu Ali and other residents of Al Walaja, West Bank. (photo: Anne Paq/Activestills.org)

In September 2013, inhabitants of al-Walaja witnessed the start of the building of a new road on their lands. The road is said to ensure access to Jerusalem from the Cremisan Monastery which would find itself on the other side of the Israeli separation wall (i.e., on the “Jerusalem side”) if it is built as currently planned. There is still a pending court case, however, filed in the name of Beit Jala residents and the Salesian Sisters who have a convent and a school next to the Cremisan Monastery, in regards to wall’s route (see petition by Saint Yves organization). The result of this legal battle, which will be taken to the Israeli High Court next month, will determine the access points of the Cremisan Monastery to Jerusalem and the West Bank. 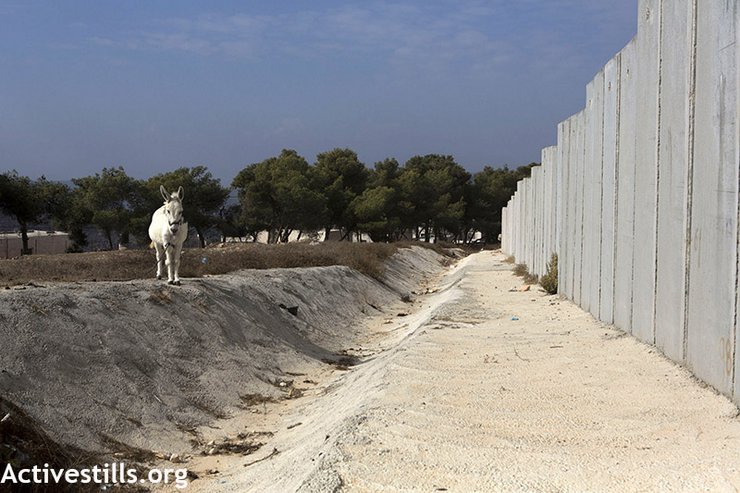 Following a lower court decision on the route of the wall in April 2013, Fouad Twal, the Latin Patriarch of Jerusalem, made the following statement: “We remind Israeli decision-makers that the expropriation of land does not serve the cause of peace and does not strengthen the position of the moderates.”

However, according to a Haaretz report, initial plans for the separation barrier in the area “that put the monastery on the Israeli side were drawn up in 2005, in consultation with the Defense Ministry, the Vatican and its local monasteries.” According to the same article, in 2012 the monks announced that they wanted to stay on the Beit Jala, or West Bank, side of the barrier, further supporting the argument that there is no need for this road. The BBC also quotes the monks as stating that they never asked to “pass on the Israeli side” and that “the entire route of the wall was established independently by the Israeli authorities.” 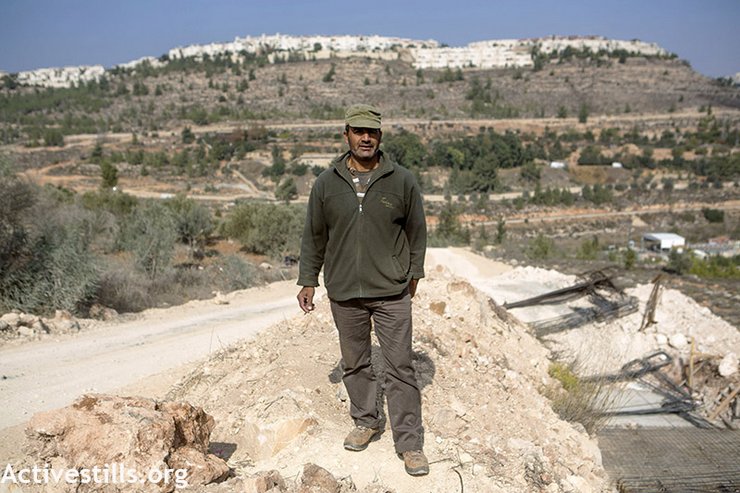 Near the site of the new road, a Palestinian inhabitant of al-Walaja, Hisham Abu Ali, sits almost every day in the land belonging to his family. Fifty of his olive trees have been marked for uprooting. He is desperate to keep them intact. Hisham has already been affected by the building of the wall. He had to sell of his flock of sheep, as it was increasingly difficult to reach the land beyond the route of the wall. Hisham tried to call out organizations for help, or the lawyer from al-Walaja, all in vain. He still decided to break his silence and wrote this open letter to Israel and to the Cremisan Monastery:

My name is Hisham Abu Ali, I was born in al-Walaja in 1969. Al-Walaja is a Palestinian village located in the Bethlehem Governate, a few kilometers far from Jerusalem. I’m writing this letter because of the latest catastrophe my village is confronted with. I’m writing because I wish to stop it, and I hope it is the last one.

Three months ago Israel started building a new road on my family’s land. This land has belonged to my family for generations; my grandfather was farming wheat and barley even before 1948. Now we have olive trees there. The new construction will destroy our trees and will take our land. That’s the ultimate consequence of Israeli occupation in our village.

Since the construction of the new road started, I go and sit in my land every day. I can’t stay far from it. I’m afraid that they will take advantage of the construction in order to destroy more than what they are authorized to. Just today I found that they marked five extra olive trees that should not be uprooted according to their own plans. 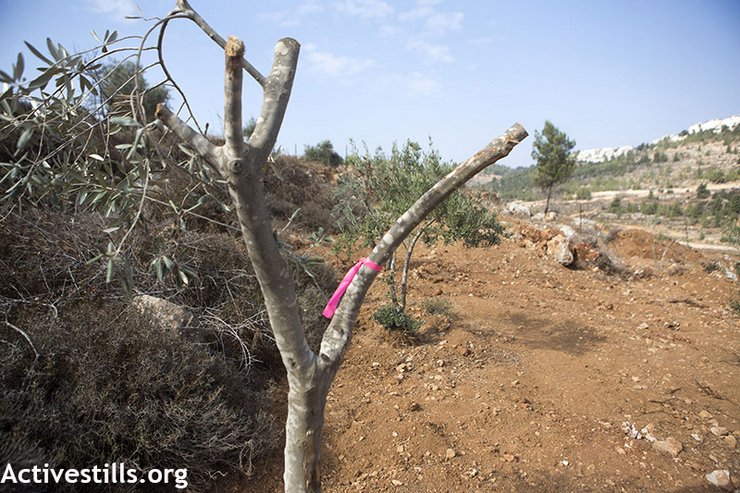 A ribbon placed by the Israeli authorities marks an olive tree they plan to uproot in order to build a new road in Al Walaja village, West Bank, November 12, 2013. Ten olive trees have already been uprooted, After which land owners replanted them. (photo: Anne Paq/Activestills.org)

Since the Palestinian catastrophe (the 1948 Nakba), Palestinians have been witnessing disasters, one after another, brought on by the Israeli occupier. Cities, villages and refugee camps pay the price of these aggressive actions. Israel occupies lands, replaces villagers’ lands with settlements and carries out various projects for Israelis.

Al-Walaja is like many other villages. It is not immune from from Israeli plans. It was completely destroyed in the 1948 catastrophe. Its people were exiled and escaped to different regions, living in refugee camps in Palestine and abroad. After the 1948 war some of its agricultural land remained on the other side of the Armistice Line, so some people came back. Many families built houses there and set up a small village with the few resources they had.

In 1967, however, Israel occupied the West Bank. Once again, most Palestinians from al-Walaja were forced to leave. Israel founded a settlement now known as Har Gilo, which took several parts of Al Walaja’s — and nearby Beit Jala’s — land. Israel built roads around it in order to prevent the villagers from reaching those areas. 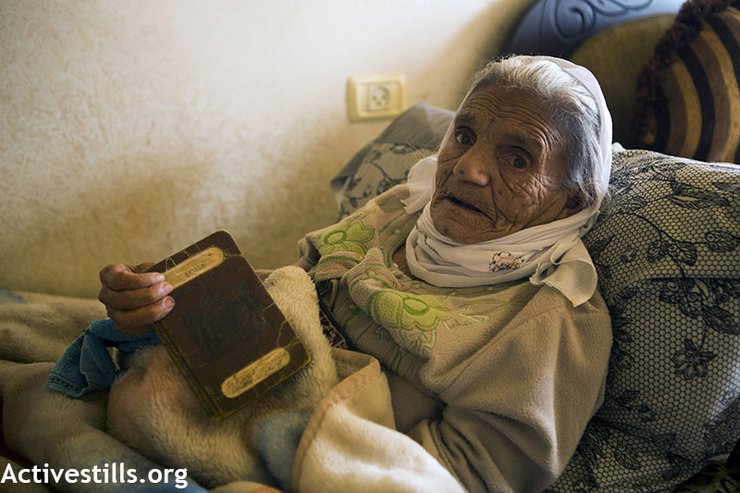 Moreover, Israeli authorities are now building the “separation” wall to seize the village and they ultimately want to build a national park for Israelis. This park is intended to preserve the rural landscape and the terraced agricultural land that Palestinians still farm. However, once the wall is finished, Palestinian farmers will not be able to reach their land anymore.

The new road is being constructed in the park area. It is destroying the same agricultural fields and olive trees that the park is intended to preserve. How can you say you are building a park by destroying ancient trees to replace them with a wide concrete road? Recently, they decided to uproot 50 olive trees belonging to my family. We received the yellow card which alerted us to remove our trees and we are supposed to receive the red card announcing their end. 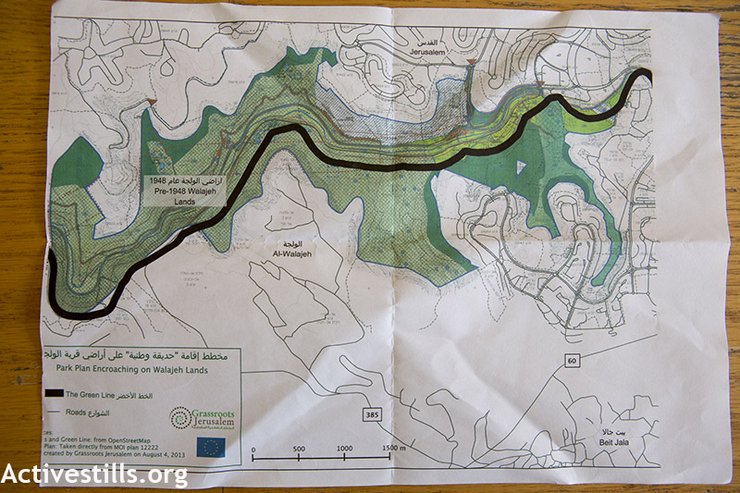 A map of the Al Walaja area provided by the organization Grassroots Jerusalem shows how a planned Israeli national park would encroach on village land. (photo: Anne Paq/Activestills.org)

Israeli authorities claim that this road serves the Cremisan Monastery, while I believe this is not their aim. They consistently promote new plans that destroy our village and make our lives harder and harder.

These Israeli actions are nothing. But what saddens me is that there have been no popular actions opposing Israel’s latest aggressive deeds. Popular and official actions should have taken place in order to stop Israel’s hostility against the village. Israeli actions against the village must be stopped, especially the road that will steal its land. 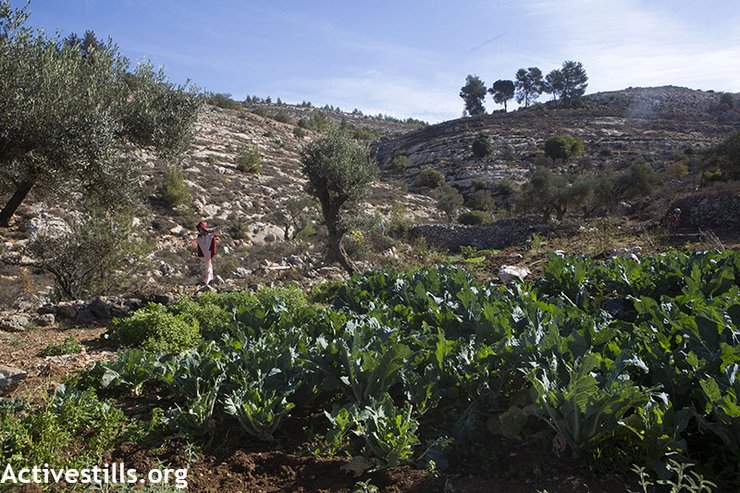 A view of the land of Al Walaja located on the other side of the route of the Israeli separation wall, West Bank, November 23, 2013. Once completed, the wall will virtually surround Al Walaja village, and residents will be cut off from most of their land. (photo: Anne Paq/Activestills.org)

This message is being sent directly to the Cremisan Monastery, which Israel claims the new road will serve. All the while, the Cremisan Monastery remains silent. It is important for us that Cremisan announces its view toward this plan and stands with us against this road and the new land grab that we are witnessing. Isn’t the church supposed to be an advocate against property theft?

We don’t understand why our land will be taken for the sake of Cremisan or a park. This is our land, and it is again being stolen from us. We demand an immediate stop of construction of the road and the destruction of our trees and lands.