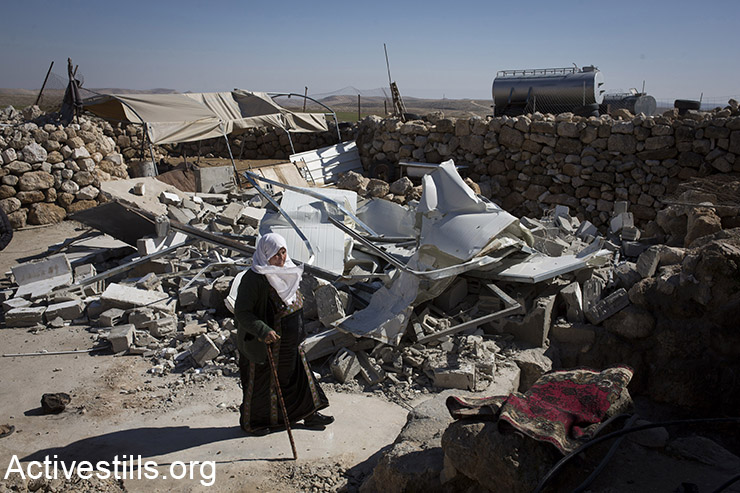 A Palestinian woman walks next to her demolished home in the village of Khirbet al-Halawah, located in an IDF firing zone, south of Hebron, West Bank, February 2, 2016. Israeli forces demolished at least a 23 buildings in Firing Zone 918 in the southern West Bank, leaving several families homeless. Israel has carried out a long campaign to relocate the residents of the area, which was declared a military zone by the Israeli government in the 1970’s. (Activestills.org) Read more here. 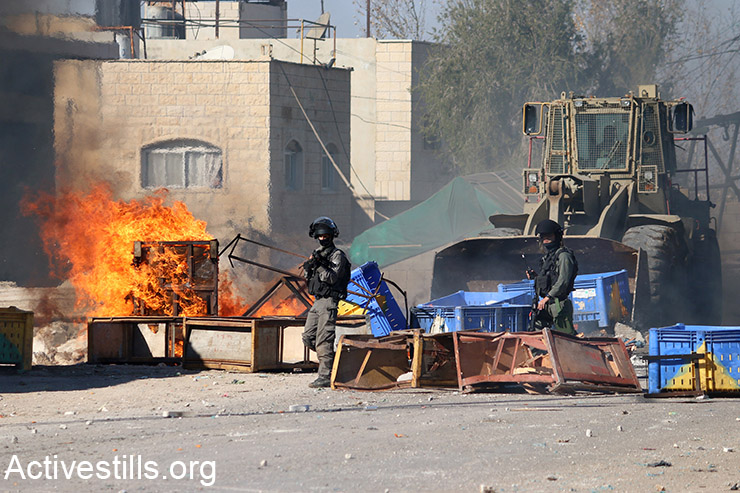 Israeli soldiers seen during clashes with Palestinian youth in the West Bank town of Qabatiya, near Jenin, West Bank, February 04, 2016. Clashes erupted after Israeli forces raided the town in retaliation for an attack by three men who shot and stabbed Israeli soldiers in Jerusalem the previous day. The Israeli army closed off roads and placed checkpoints in and around the town as a form of collective punishment. At least 10 Palestinians were wounded. (Activestills.org) Read more here. 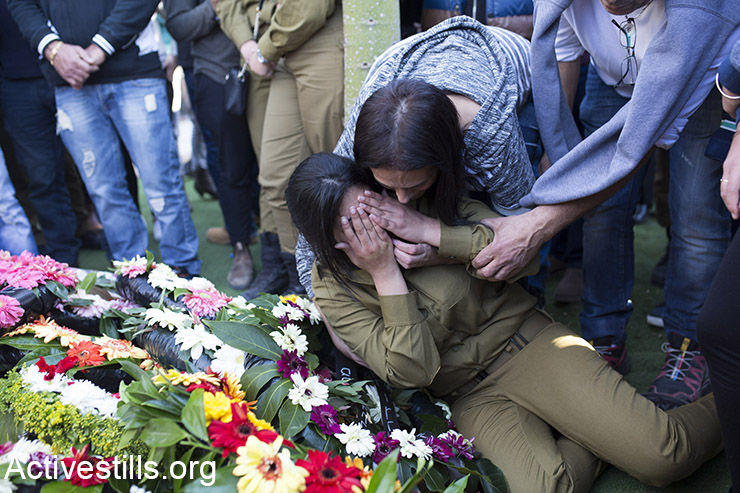 An Israeli soldier mourns next to the grave of Israeli Border Policewoman, Hadar Cohen, 19, during her funeral at Yehud military cemetery, Israel, February 4, 2016. Three Palestinians shot and killed Cohen and wounded another before being shot dead at Damascus Gate in Jerusalem’s Old City on February 3, 2016. (Activestills.org) 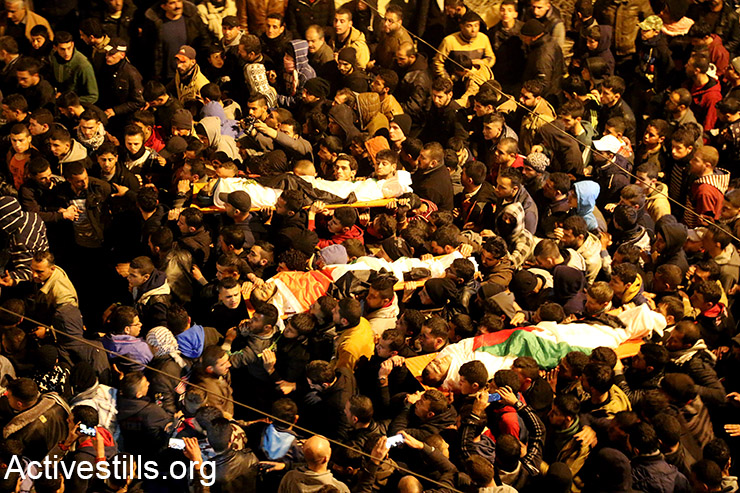 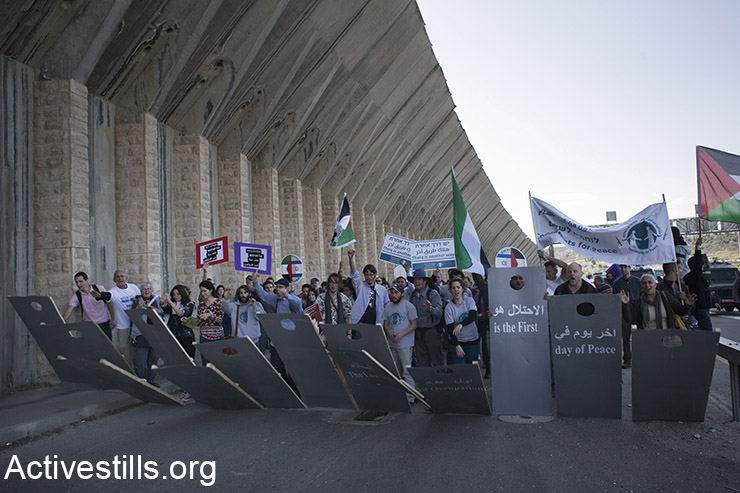 Activists hold up a mock separation wall during a protest against the occupation on the West Bank’s main Jerusalem-Hebron highway, Beit Jala, West Bank, February 5, 2016. (Activestills.org) 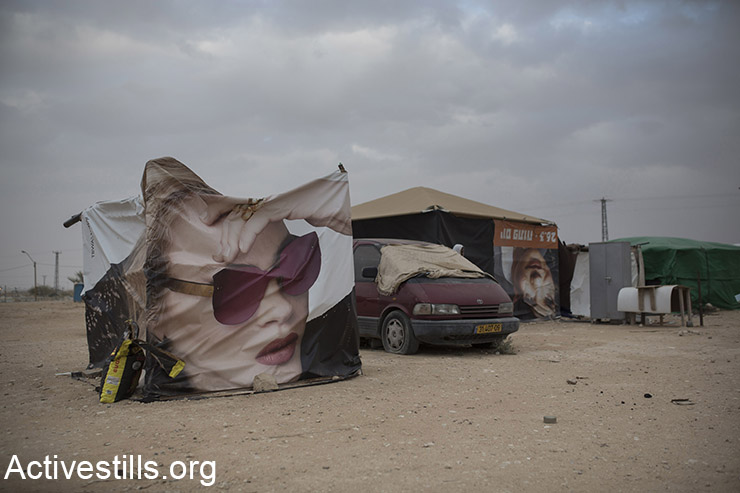 A makeshift restaurant is seen outside Holot detention center in the Negev desert, February 6, 2016. African asylum seekers jailed in Holot opened a few restaurants and bars outside the facility, as they say the food given to them is not sufficient and is of poor quality. (Activestills.org) For more click here. 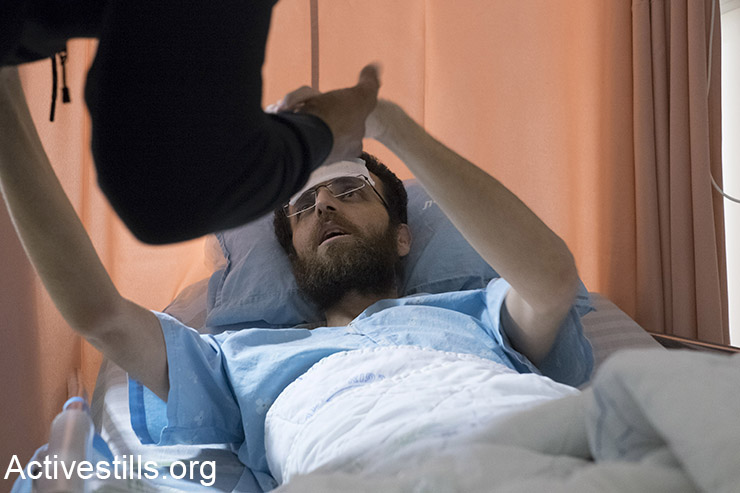 Palestinian journalist Muhammad Al-Qiq is seen in Ha’emek hospital in the northern Israeli town of Afula on February 8, 2016 during his hunger strike against his administrative detention. On February 4, Israel’s Supreme Court lifted an order to hold him under administrative detention, which allows the state to hold suspects without trial indefinitely. But the court ruled that al-Qiq needs permission to leave the hospital where he was handcuffed to his bed at night. Al-Qiq, a father of two and a correspondent for Saudi Arabia’s Almajd TV network, was arrested on November 21, 2015 in his home in the West Bank city of Ramallah. (Activestills.org) For more on al-Qiq, click here. 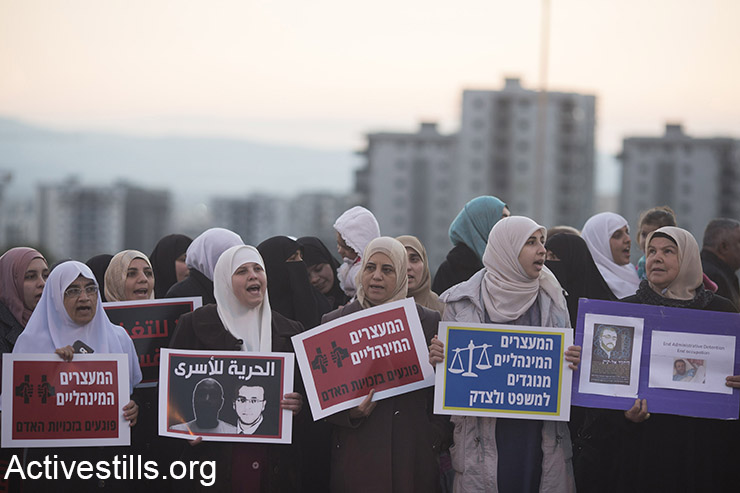 Palestinians citizens of Israel protest for the release of Palestinian journalist Muhammad Al-Qiq, who went on hunger strike for 94 days against his administrative detention. (Activestills.org) 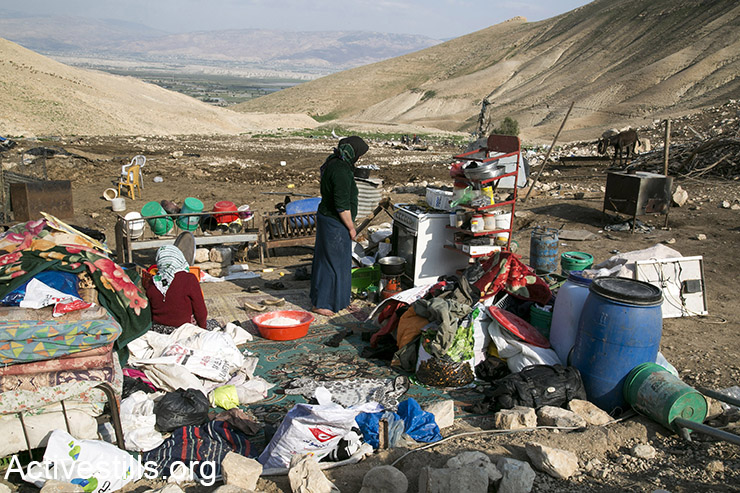 A woman from the community of Ein Kurzliya in Jordan Valley prepares bread next to her belongings, after Israeli authorities demolished homes in the area, February 10, 2016.  Israeli authorities conducted mass demolitions in for areas in the Jordan Valley. Seven family houses and six animal shelters were demolished, leaving 71 people without a roof over their heads. In addition, water pipes system that provide water to 300 people was deliberately damaged. (Activestills.org) Read more here. 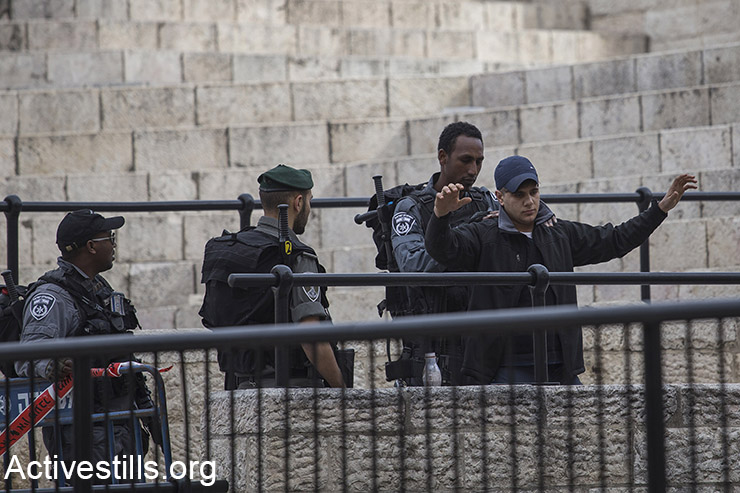 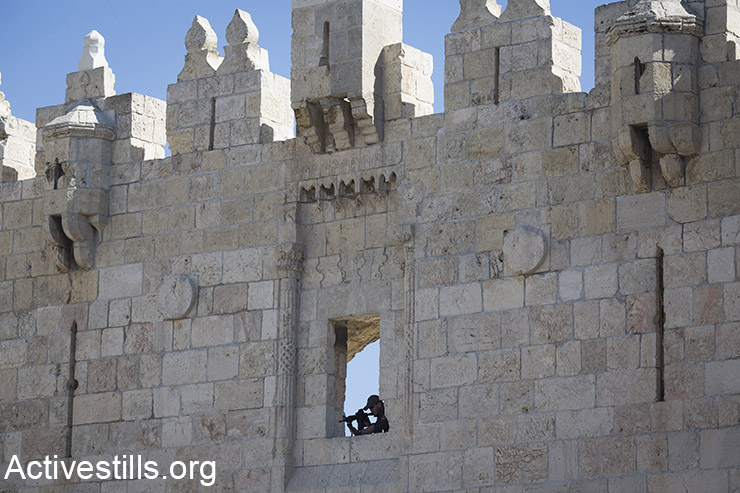 An Israeli anti-riot police sniper is posted on a wall above Damascus Gate in Jerusalem’s Old City, February 17, 2016. (Activestills.org) 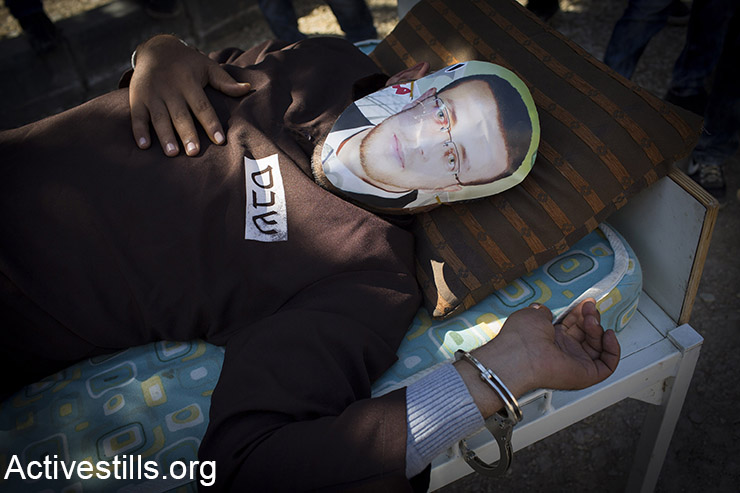 A Palestinian man wears a mask depicting hunger-striking Palestinian journalist Mohammed al-Qiq during a demonstration marking 11 years of struggle against the separation wall in the West Bank village of Bil’in, near Ramallah, February 19, 2016. (Activestills.org) For more on the protest, click here. 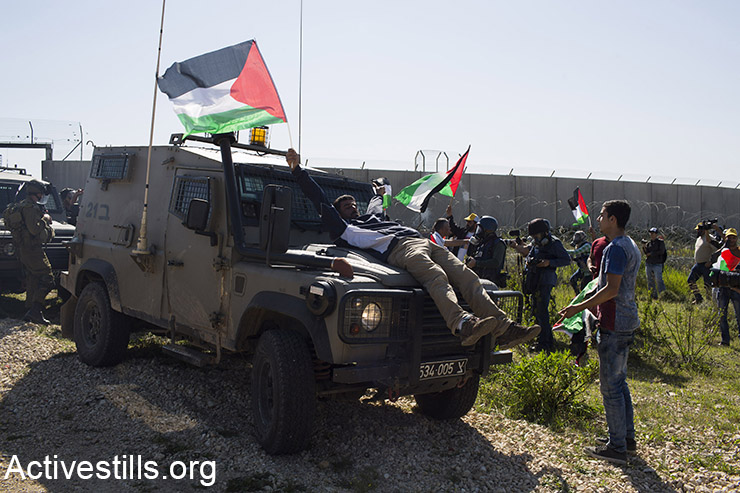 A demonstrator sits on top of a Israeli army jeep during a protest protest marking 11 years to the struggle against the separation wall in Bil’in, February 19, 2016. (Activestills.org) 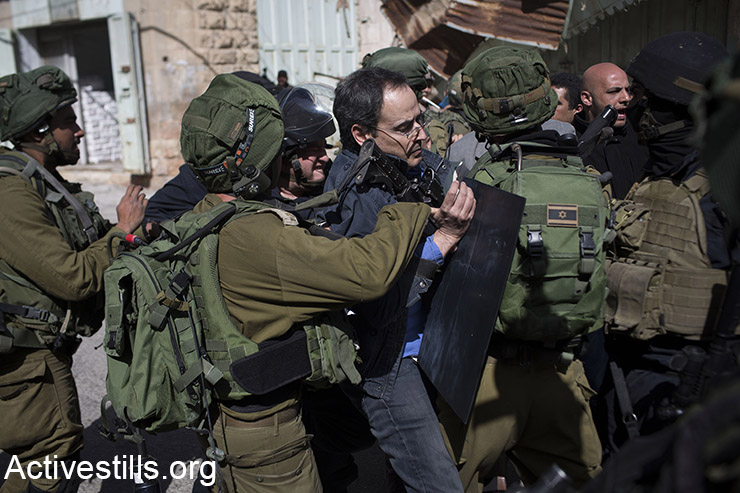 Israeli soldiers arrest activist Gadi Algazi during a protest against the closure of Shuhada Street to Palestinians in the West Bank city of Hebron, February 21, 2014. The army arrested 12 Israeli activists as some 150 protesters gathered to mark the 22nd anniversary of the street’s closure following the Ibrahimi Mosque Massacre in 1994 (Activestills.org) For more photos from the demo, click here. 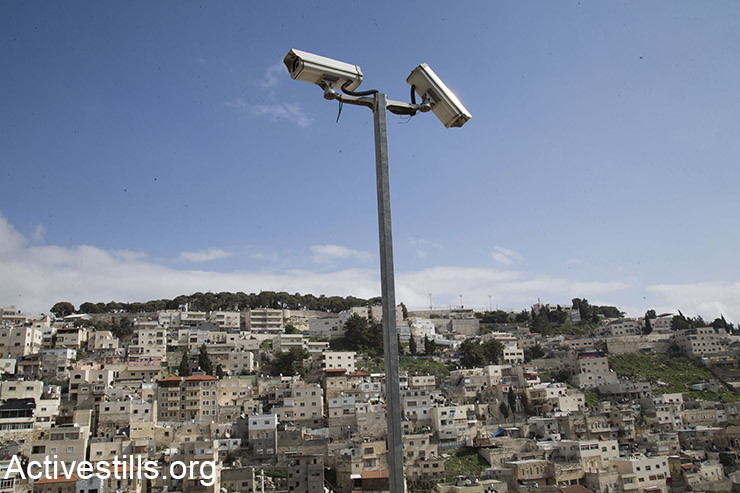 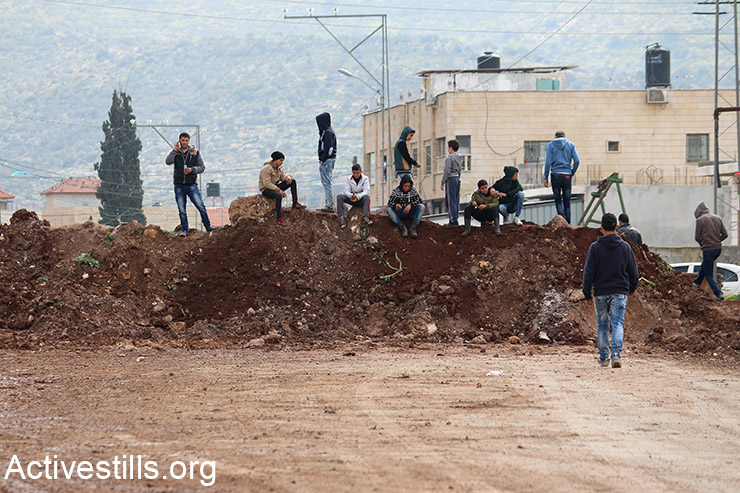 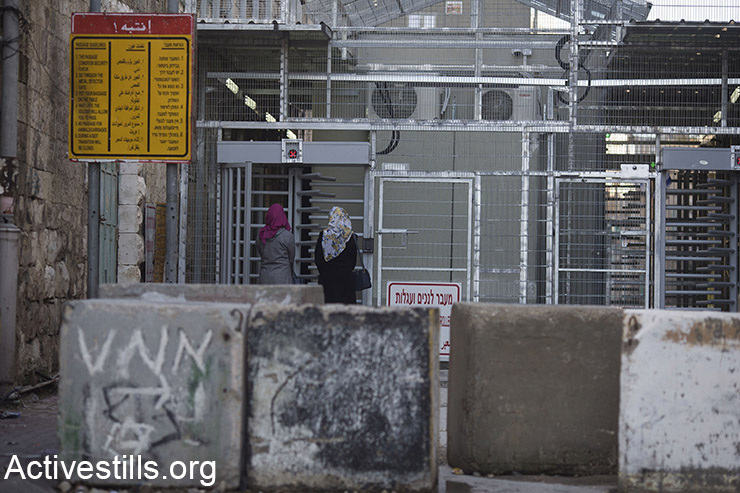 Palestinians walk towards a checkpoint to cross over into Shuhada Street in the H2 area of Hebron, West Bank, February 24, 2016. (Activestills.org) 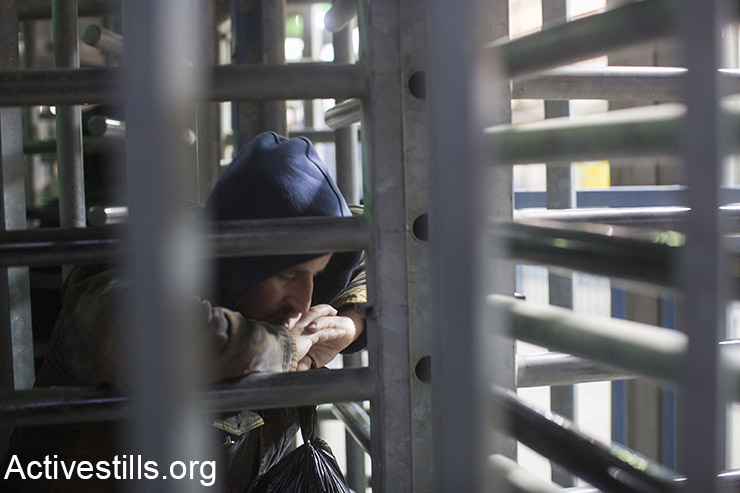 A Palestinian worker waits to cross Qalandiya checkpoint between the West Bank city of Ramallah and East Jerusalem, in the early hours of Febuary 25, 2016. (Activestills.org) For more photos from Qalandiya, click here. 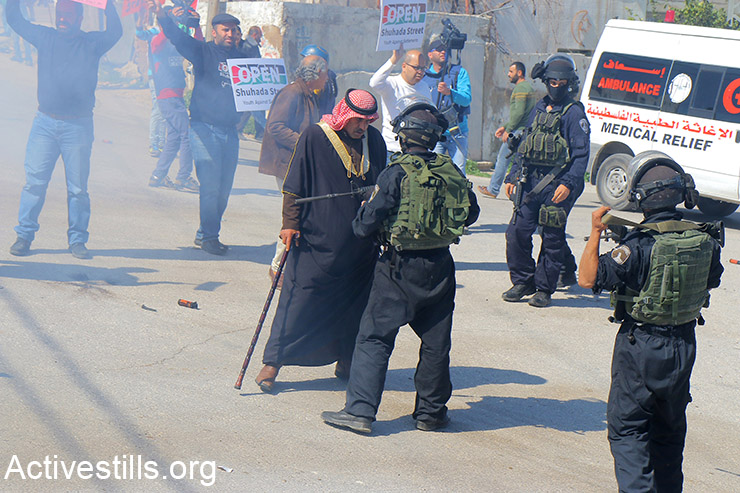 Palestinian activists march during a protest against the closure of Shuhada street to Palestinians, in the West Bank city of Hebron, February 26, 2016. (Activestills.org) 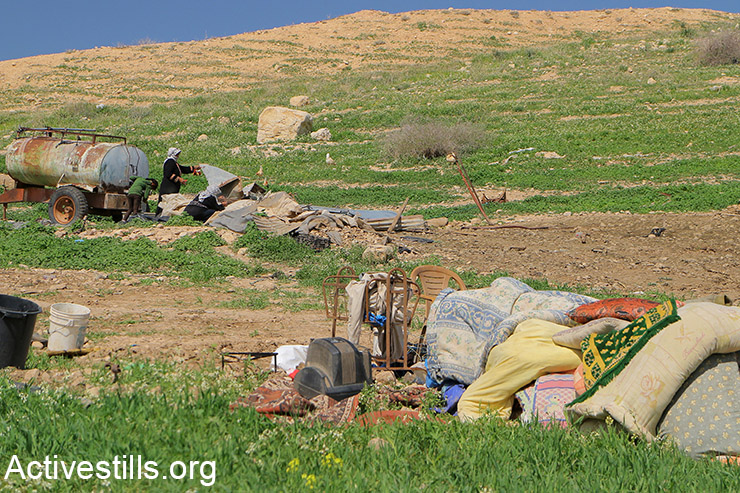 A general view of Al-Farisiya community, which was demolished on February 29, 2016 by Israeli forces, northern Jordan Valley, West Bank. Four Palestinian families lost a number of their homes and tents. According to the locals, the structures were been demolished for the second time in less than a month. (Activestills.org)