Editors’ picks of the top photos from Palestine, Israel and beyond for the month of February. This month, Palestinians establish a new protest tent, ultra-Orthodox Jews protest military recruitment, Israeli factory workers protest job cuts, a 14-year-old Palestinian girl is released from prison after 44 days, Negev Bedouin mourn their lost ones, Bil’in marks 10 years of popular struggle, LGBTQ activists speak up against homophobia, and a second wave of snow blankets the holy city. 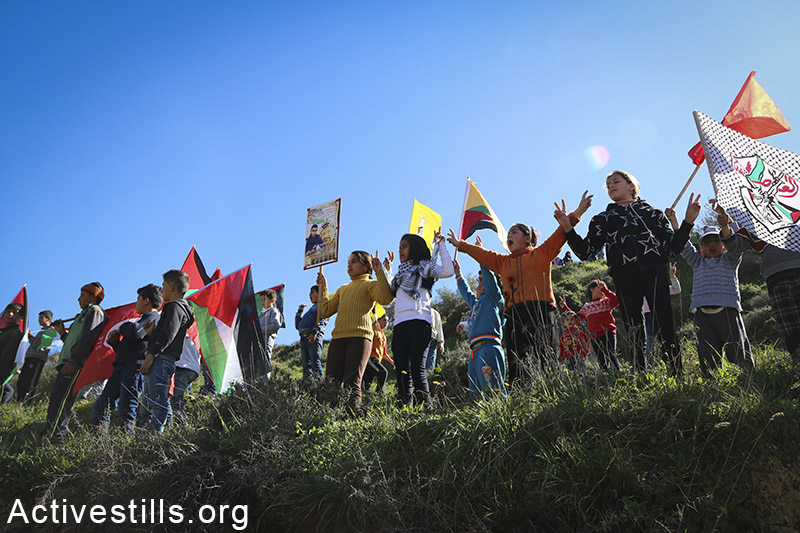 Hundreds of Palestinians participate in the funeral of 19-year-old Ahmed Najjar, who was shot to death by the Israeli army near his village Burin, Nablus, West Bank, February 1, 2015. The Israeli army reported that Najjar was about to throw a molotov cocktail at passing cars. (photo: Ahmad al-Bazz / Activestills.org) 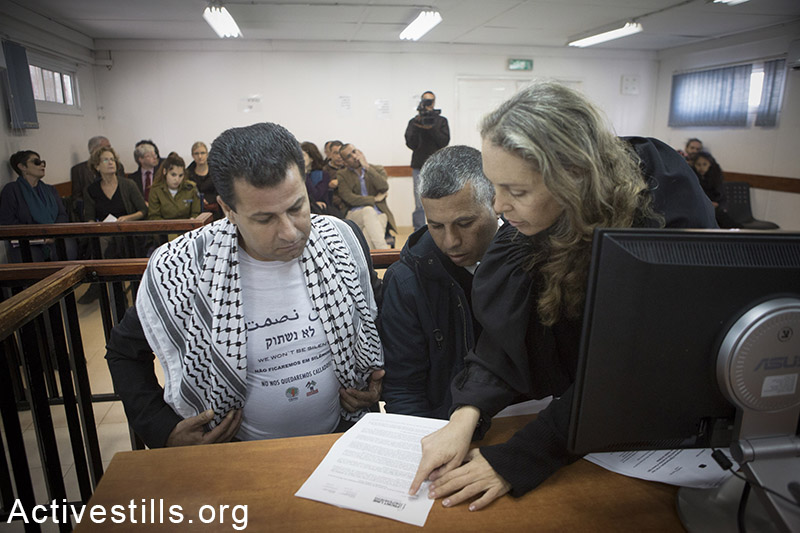 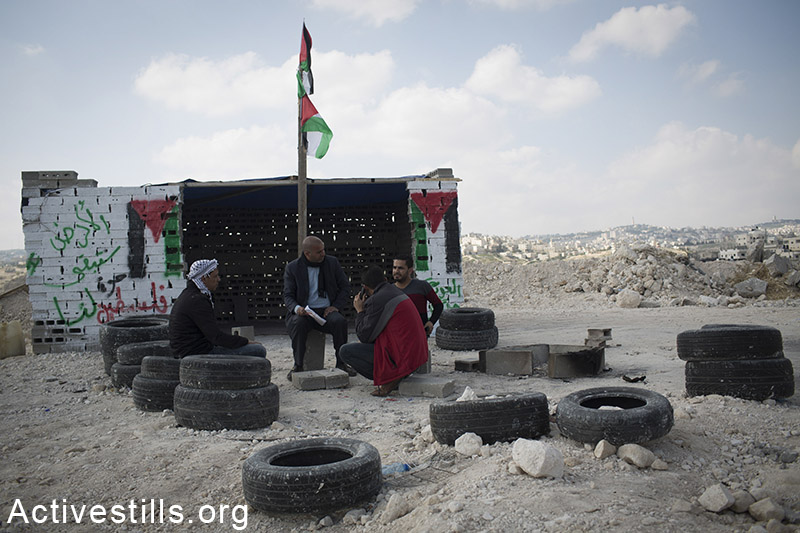 Palestinian activists sit in the “Gate of Jerusalem” protest camp in Abu Dis near Jerusalem, February 9, 2015. The camp, which was demolished four times by the Israeli army, was set up to protest Israel’s plan to confiscate lands in the E1 area, and to force the Jahalin Bedouin to move to a garbage dump. (photo: Oren Ziv / Activestills.org) 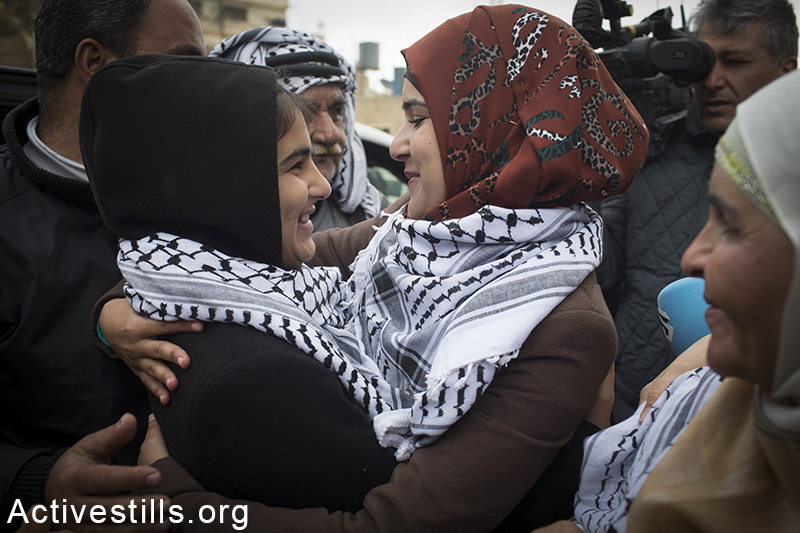 Malak Al-Khatib, 14, is welcomed by family members as she arrives at the village of Beitin near Ramallah after being released from an Israeli prison, February 13, 2015. Al-Khatib was arrested on December 31, 2014, and subjected to interrogation and harsh treatment without legal representation. She was accused of throwing stones at Israeli soldiers. On January 22, she was sentenced for two months in prison and her family was slapped with a fine of NIS 6,000 ($1523). By the end of 2014, there were 197 children still imprisoned by Israel. (photo: Oren Ziv / Activestills.org 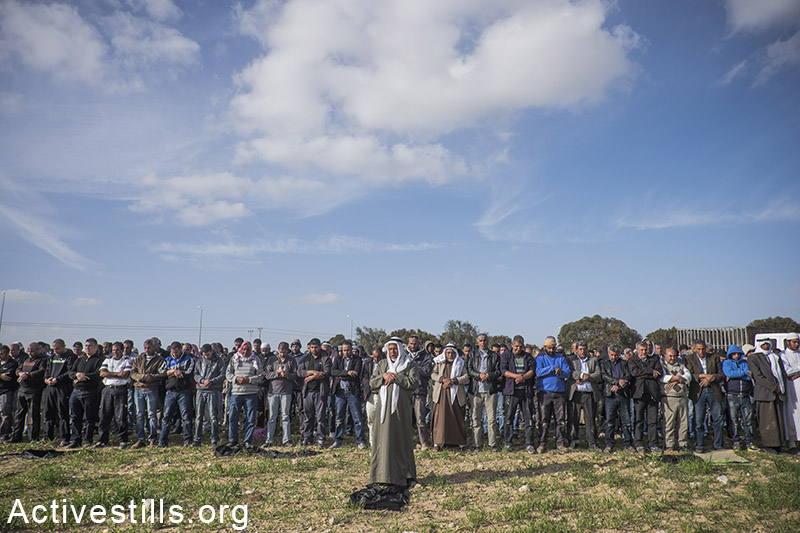 Thousands participate in the funeral of Zana Abu Trash, Mnua Abu Elkian, Fatma Abu Elkian, Kfaia Alasibi and Name Abusheida near the Bedouin town of Hura, Negev Desert, February 4, 2015. The eight were killed in a car accident on their way back from prayers in Jerusalem. A truck belonging to the Israeli Land Administration, which had just returned from destroying Bedouin crops, crashed into the bus while on Road 31, killing the women and injuring dozens of others. Road 31 primarily serves the Bedouin communities of the Negev, and is the only route to the nearby city of Arad. Over 70 people were killed on this road over the last decade due to poor infrastructure. (photo: Yotam Ronen / Activestills.org) 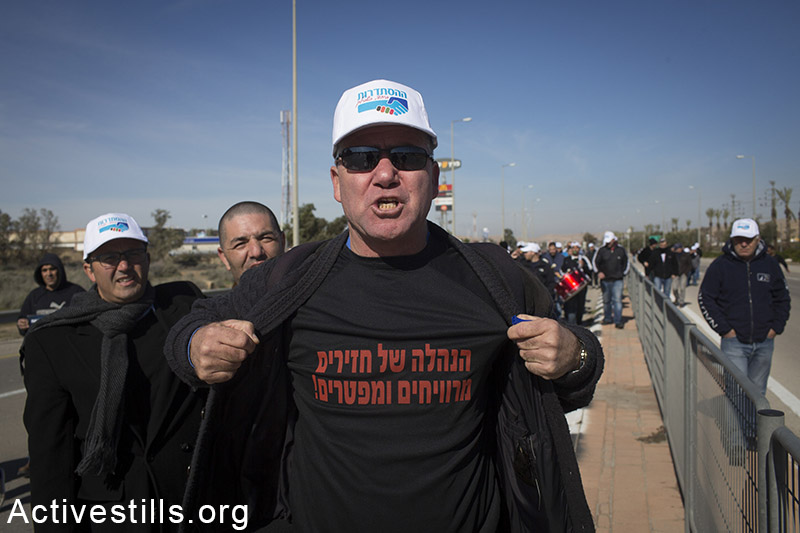 Israeli workers protest against a plan to dismiss hundreds of workers employed in a factory of the CIL group, in the southern city of Dimona, February 22, 2015. (photo: Oren Ziv / Activestills.org) 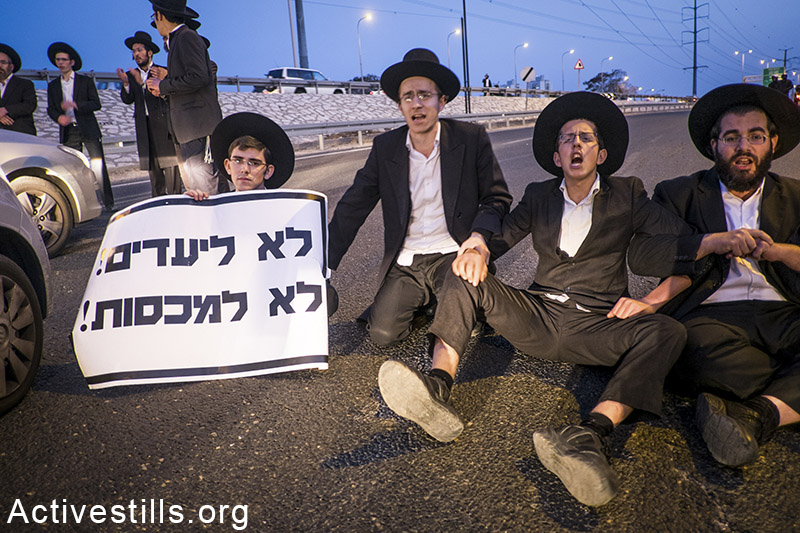 Ultra-Orthodox Jews participate in a protest in solidarity with four ultra-Orthodox youths who were detained the week prior for refusing to report to a military recruitment base, near the city of Beni Brak, February 9, 2015. (photo: Yotam Ronen / Activestills.org) 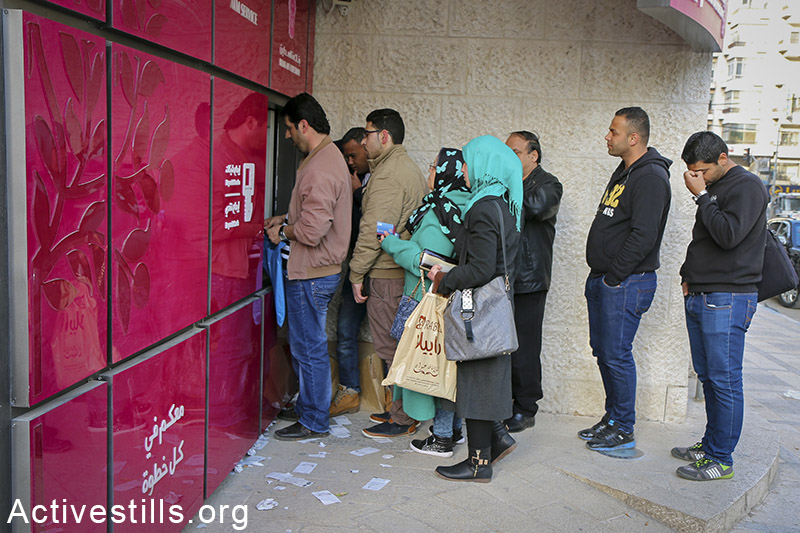 Palestinian public sector workers stand in line for their salaries in Nablus, West Bank, February 9, 2015. The Palestinian Authority announced that it will pay only 60 percent of salaries for the month of January (a minimum of NIS 2000).  The same thing happened the previous month. The PA is in a midst of a financial crisis after the Israeli’s decision on January 3rd to freeze transfers of tax revenues in response to Mahmoud Abbas’  decision to call on the International Criminal Court to pursue war crimes charges against Israel. The PA workers’ salaries equal to approximately $200 million a month, $120 million of which is covered by taxes collected by Israel. (photo: Ahmad al-Bazz / Activestills.org) 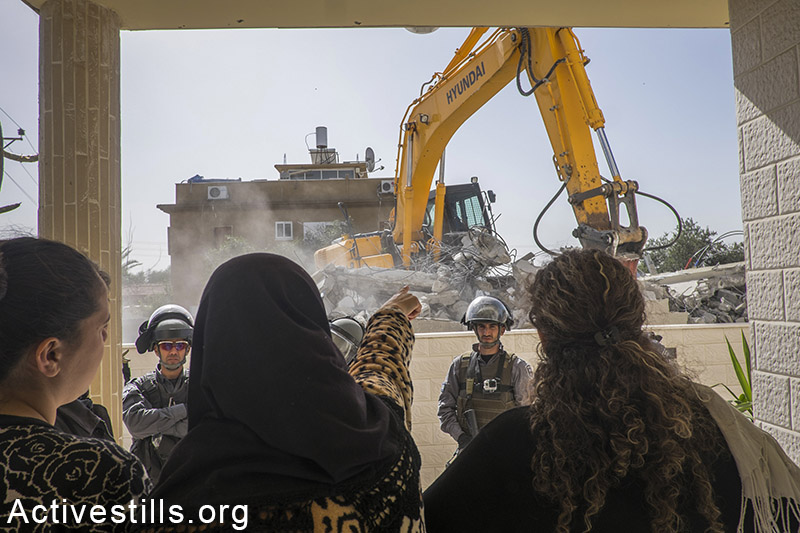 Israeli police officers stand guard as the home of Hana’a al-Nakib and her four children is demolished, Lod, February 10, 2015. The house, which was built with the help of family members and neighbors who donated money to help the single mother, was constructed on family-owned land, but without permission from the Israeli authorities. Palestinian citizens of Israel can hardly obtain building permits due to Israel’s discriminatory policies. (photo: Oren Ziv / Activestills.org) 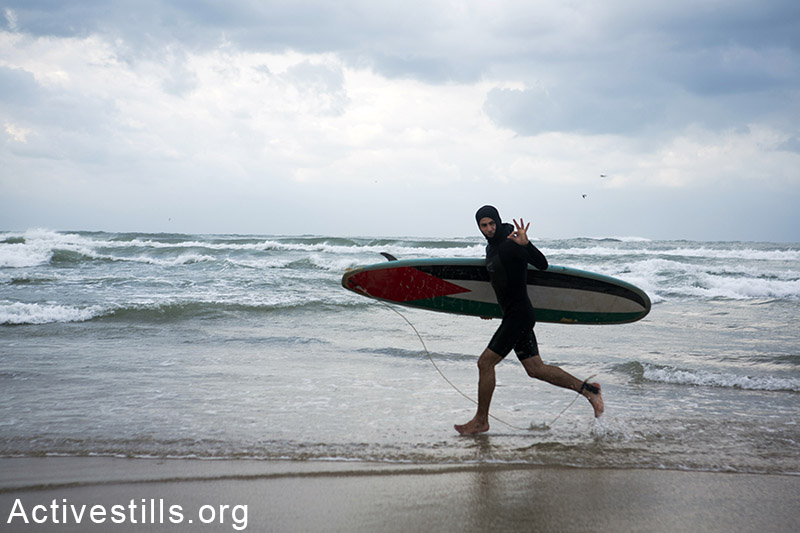 A Palestinian surfer runs on the coast of Gaza City, February 13, 2015. The sea remains one of the few open spaces where Palestinians can go and try to relax despite the dire humanitarian situation and the trauma following the last summer’s Israeli military offensive. (photo: Basel Yazouri / Activestills.org) 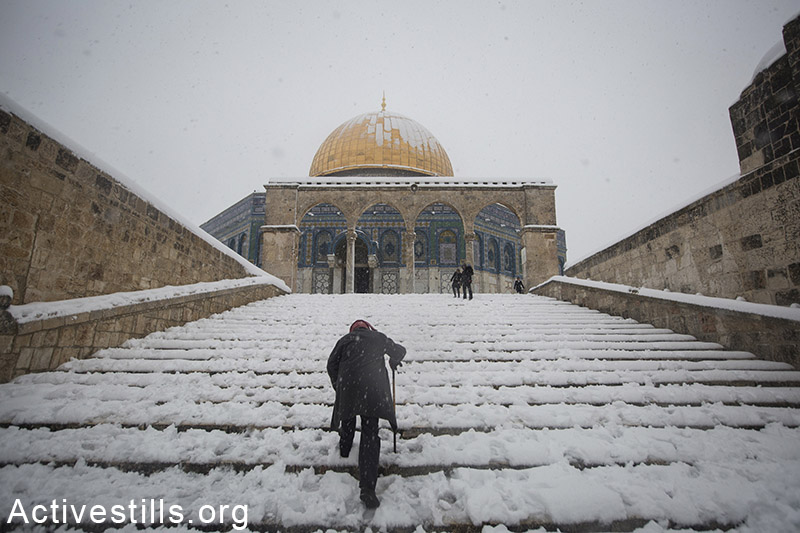 A Palestnian man walks up to the Dome of the Rock in the Old City of Jerusalem, following a snow storm, February 20, 2015. (photo: Faiz al-Bazz / Activestills.org) 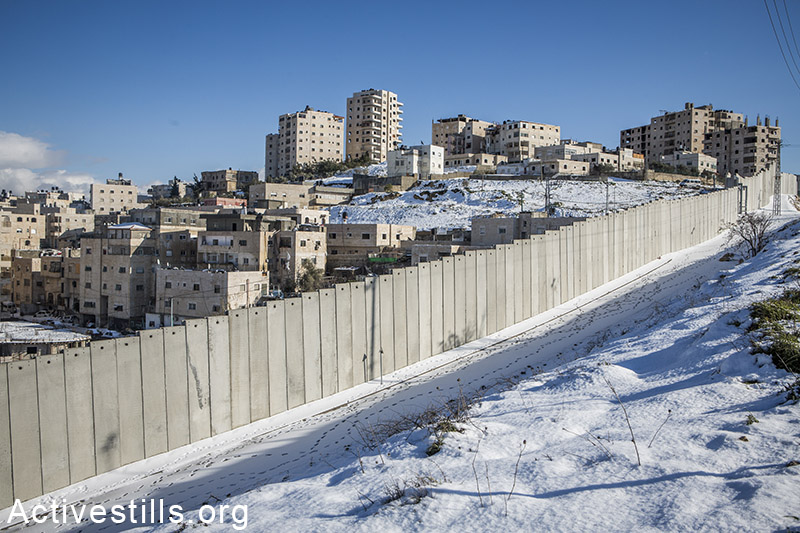 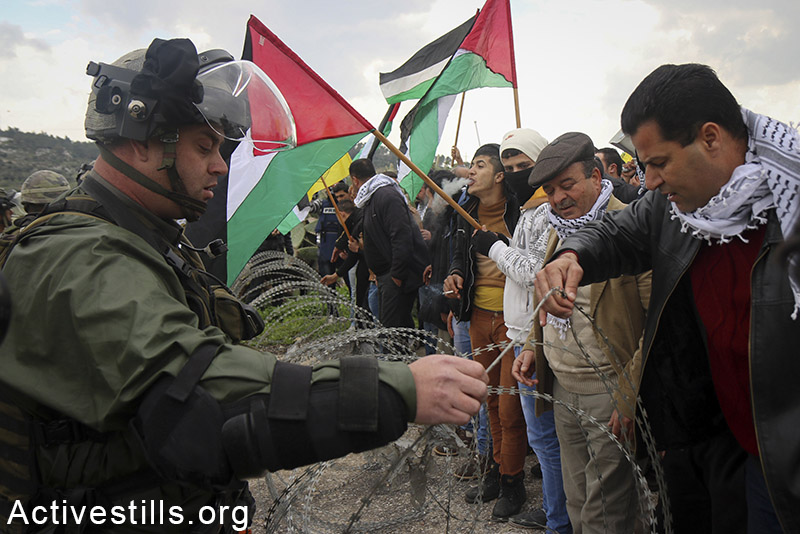 Palestinian activist Abdullah Abu-Rahmah joins local villagers at a protest against the closing of the eastern gate to the West Bank village of Azzun, February 14, 2015. The gate, which has been closed since 1990 due to requests by the nearby settlement Karnei Shonron, previously served as a crossing into the city of Nablus. (photo: Ahmad al-Bazz / Activestills.org)

Young Muslim women stand hand-in-hand in front of the Oslo Synagogue during the “Ring of Peace” vigil, February 21, 2015. The vigil was organized by Muslim youth in solidarity with Norway’s Jewish community following anti-Jewish attacks in Denmark and other parts of Europe.
(photo: Ryan Rodrick Beiler / Activestills.org) 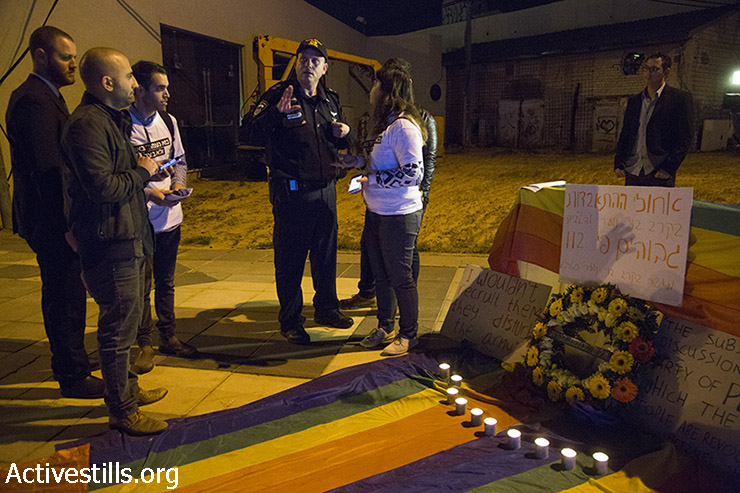 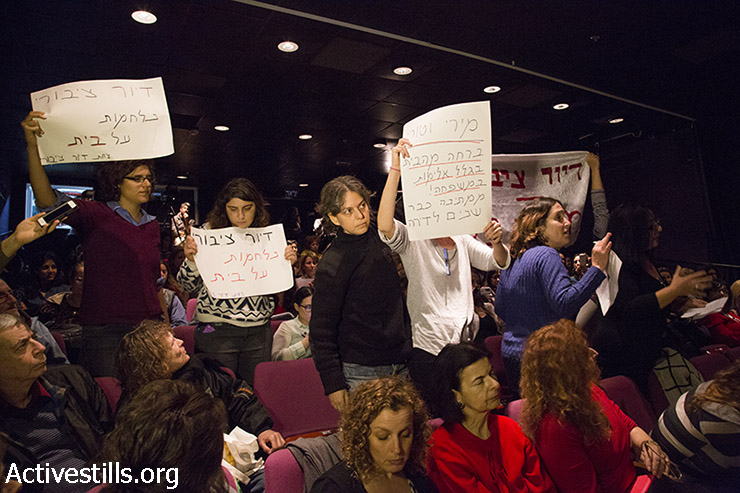 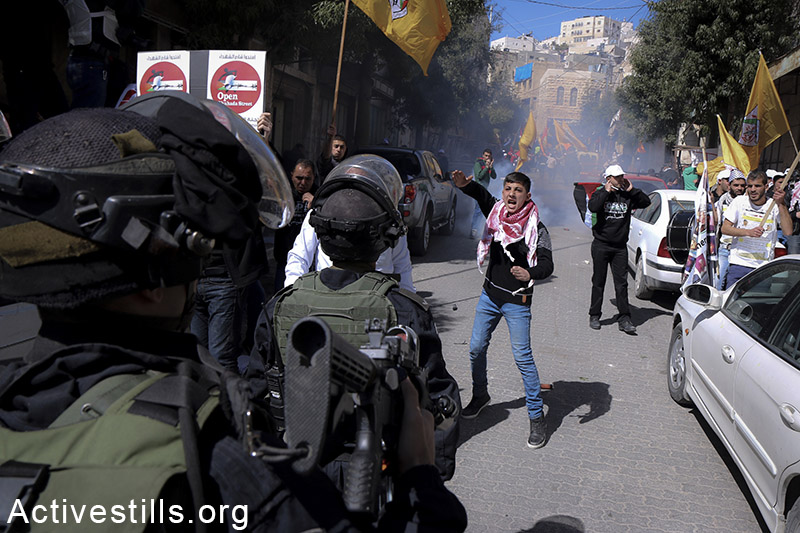 Palestinians protest against the closure of Shuhada Street, Hebron, West Bank, February 27, 2015. Hundreds of Palestinians and internationals gathered to mark the 21st anniversary of the street’s closure. Shuhada was closed by the Israeli army in 1994 following the Cave of the Patriarchs massacre, when Baruch Goldstein, an Israeli settler, killed 29 Palestinians worshippers. (photo: Ahmad al-Bazz / Activestills.org) 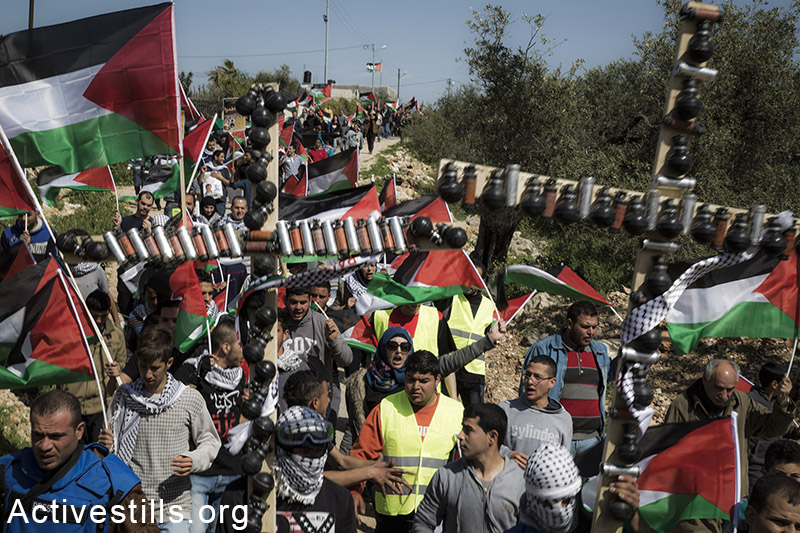 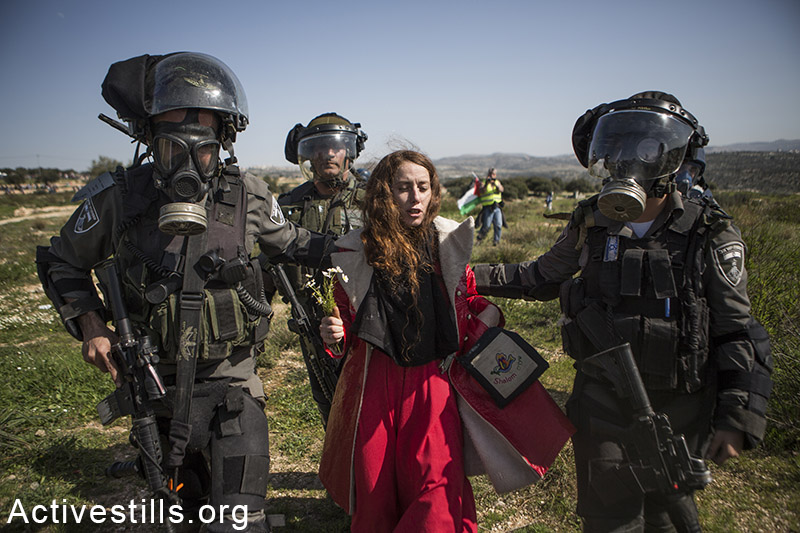 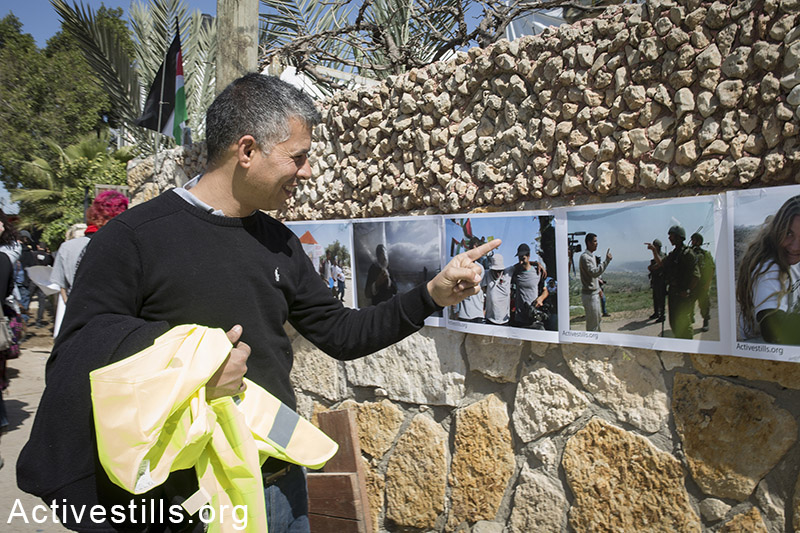 Muhammed Khatib, a Palestinian activist with the Popular Committees in Bil’in, stands near his photo taken in 2005, at an Activestills exhibition during a protest marking 10 years of struggle in Bil’in, February 27, 2015. The exhibition presented photos taken by Activestills photographers during the protests over the last 10 years in the village. Shiraz Grinbaum / Activestills.org 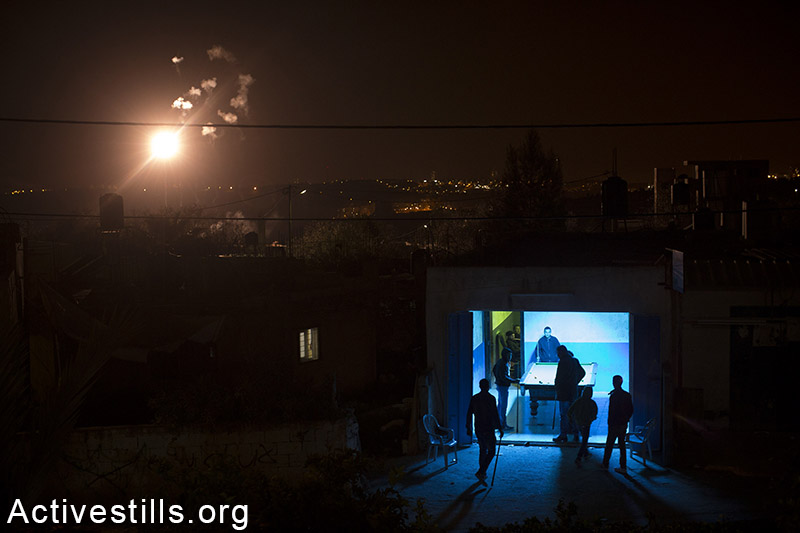