American Jews have long overwhelmingly supported an end to the occupation, but increasingly, we are building an organized critical mass who are also willing to push our institutions and politicians in the same direction. IfNotNow takes its Passover message of liberation to Hillel and AIPAC. 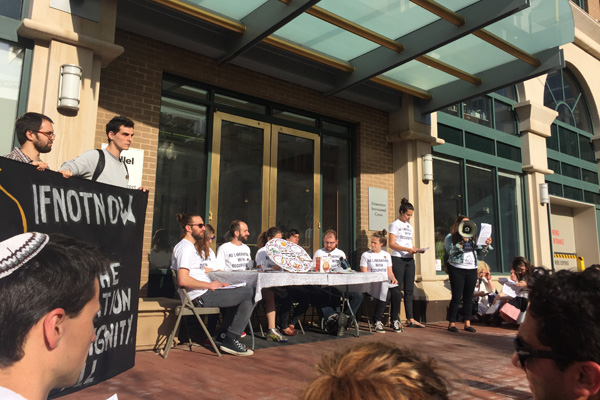 We gathered early in the morning, before the work day began. By the time I arrived at our meeting place, there were leaders milling about in neon vests to assist with logistics. There were megaphones. There were posters. I remarked to a friend, “This feels like trip day at my Jewish summer camp, but a bit edgier.”

We had come together as IfNotNow, a movement working to end American Jewish communal support for the Israeli occupation. Our action was the first in a week-long series of actions under the banner of Dayenu! No Liberation with Occupation. Because this Passover, when Jews gather around the country to reflect on the meaning of liberation in our tradition, we are not prepared to allow the American Jewish community to ignore our oppression of the Palestinian people. Not with the occupation about to turn 50.

We did. And my God, was that seder beautiful. 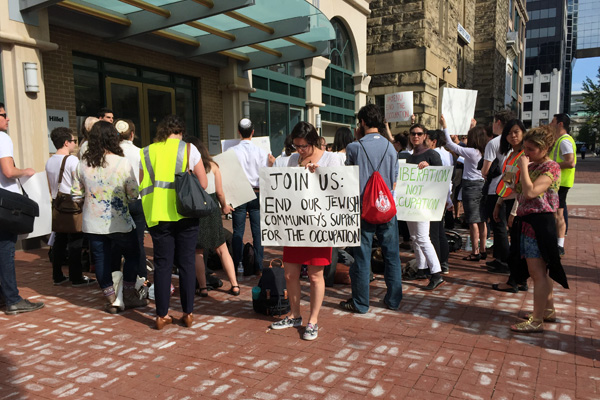 As a Jewish anti-occupation activist, it can be easy to feel alone in this political climate. Last week, my friend and visionary anti-occupation activist Simone Zimmerman was suspended from her position as Jewish Outreach Coordinator at the Bernie Sanders campaign following intense pressure from right-wing Jewish establishment leaders. And just yesterday, hundreds of Jewish Israelis gathered in Tel Aviv to rally behind an Israeli soldier who shot and killed an already subdued Palestinian attacker in Hebron. Reportedly, many wore “Kahane Lives” paraphernalia and chanted “death to Arabs.” One sign read, “Kill Them All.” 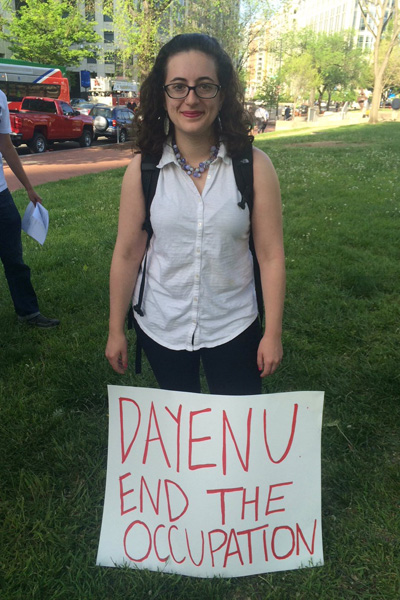 The author, Leanne Gale, at the Liberation Seder in Washington D.C.

We began the seder with the Shehecheyanu, the Jewish blessing for auspicious beginnings. When I hear the Shehecheyanu, I cannot help but to hear it in my father’s voice. I grew up listening to him in his capacity as Rabbi Gale, chanting the blessing at weddings, holiday celebrations, and bnai mitzvah. I burst into a smile as we blessed our auspicious gathering of Jews united for freedom and dignity for all.

We sang Lo Yisa Goy — a passage from Isaiah popular in many Jewish communities. It translates, “Nation shall not lift up sword against nation, and neither shall they learn war anymore.” For the first time in years, I was able to sing the song loudly and freely without wondering whether those around me cared about the Israeli occupation at all. I knew I was surrounded by a Jewish community that did care, urgently.

And we crafted our own version of the Dayenu, the Passover recitation of thanks for liberation from Egypt and the many other gifts bestowed upon the Jewish people. Rather than chanting, “It would have been enough,” we chanted, “We should have said enough:”

When Hillel, which is supposed to be a home for Jewish students, silenced our voices, we should have said enough.

When our Hebrew schools showed us only one side of the story and then demanded our unwavering support for Israel and its abusive policies, we should have said enough.

When we were told the strength and safety of our community depended on the subjugation of another, we should have said enough.

When we saw the words “Death to Arabs” written on the walls of buildings, we should have said enough.

When settlers took over Palestinian homes in East Jerusalem, we should have said enough.

The moment East Jerusalem came up, I thought back to my former colleagues at Ir Amim (“City of Nations” or ”City of Peoples”) who work every day for a more equitable and sustainable Jerusalem.  I thought back to my friend Anwar, a young Palestinian resident of East Jerusalem who Skyped with me earlier this year on flickering Internet as Israeli Border Police raided her village. I thought of my role model, Ahmad Sub Laban, who has spent the past year working against the clock to protect his family from eviction by settlers in the Old City of Jerusalem. Here, in this American-Jewish space, these individuals were finally welcome.

It dawned on me that IfNotNow, and the young Jews making it happen, herald a new era of American Judaism. For too long, our Judaism has been poisoned by Israeli military occupation and American Jewish complicity in the oppression of the Palestinian people. When I walk into synagogue, my body wants to fall into the relaxed familiarity of Kabbalat Shabbat but the moment is tainted knowing that the congregation is silent on the occupation. When I sing the Psalm, “Pray for the peace of Jerusalem,” all I can think about is Israeli Border Police spraying skunk water on Palestinian homes and schools in A-Tur, and how lonely it feels to think about that in a mainstream Jewish space. And when I join my community to fast in repentance for our sins on Yom Kippur, I cannot help but to feel utterly enmeshed in a silent web of hypocrisy as the day passes without one mention of the Palestinian people. 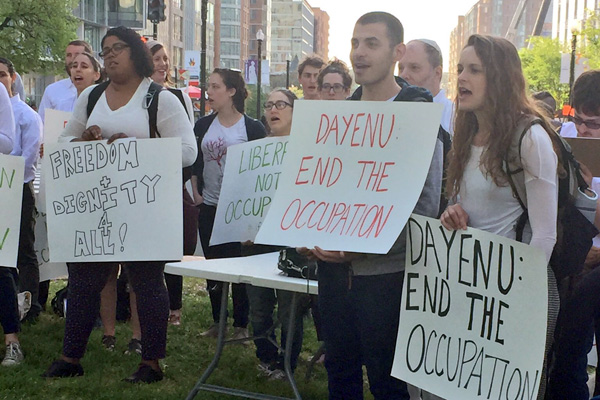 But young American Jews who love our tradition and decry the injustice of occupation are coming of age. And we are creating a Judaism together that does not force us to empty our prayers of meaning.

I feel in my bones like the times are finally changing. We are creating an actualized, morally consistent Judaism, and we are taking it to its next logical step. American Jews have long overwhelmingly supported an end to the occupation, but increasingly, we are building an organized critical mass who are also willing to push our institutions and politicians to make it happen. We may have been a silent majority in the past, but our silence has not served us, or the Palestinians. So we are finding the courage, and community, to get louder.

IfNotNow is growing, with chapters popping up in Jewish communities across the country. Just in D.C. alone, IfNotNow is leading training sessions every month, coordinating actions, and organizing with passionate intensity. And on the same day as the IfNotNow D.C. Liberation Seder, six IfNotNow leaders in Boston were arrested while holding a Liberation Seder in the lobby of the local AIPAC office. That’s not to mention the exponential growth of Jewish Voice for Peace, the student-led organizing of Open Hillel, or the incredible work of J Street U to demand transparency for Jewish institutional funding across the Green Line. As IfNotNow folks like to say, “We are the generation that will end American Jewish support for the occupation.”

Footage of the arrests at the #LiberationSeder inside Boston's AIPAC office yesterday. AIPAC chose to arrest young Jews trying to take leadership in the community rather than publicly stand for freedom and dignity for all.

On Passover, it is traditional to ask, “Why is this night different than every other night?” This Passover, hundreds of young Jews across the country are taking to the streets to demand liberation from the Mitzrayim, the narrowness, of occupation, for Jews and Palestinians alike. We are turning our prayers in protest, the way the Prophets intended. We are turning our Passover songs into cries for justice.

That feels pretty different to me. It feels like a new era.