When the police say the residents of Qusra fabricated the incident, they are actually saying the residents committed the felony of a false report. But so far, not a single Qusra resident has been interrogated for false complaints. 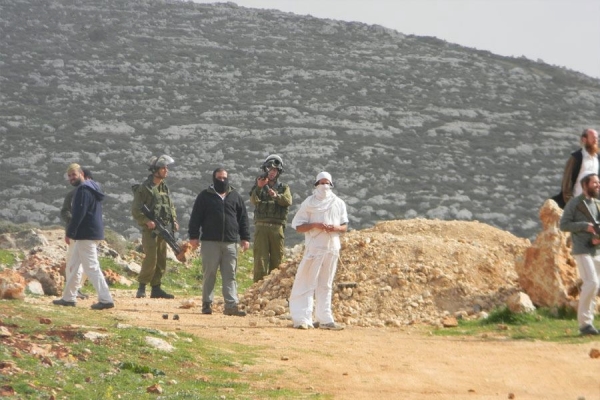 At the end of last week, the police came out with an unusual announcement, claiming that the torching of six cars in the village of Qusra some ten days ago was “fabricated.” We reacted immediately (Hebrew), and reporter Yigal Mosco of Channel 2 had some select words for the police (Hebrew), noting their claims were “embarrassing.” A few more words are in order.

Let’s start at the beginning. When the police say the residents of Qusra fabricated the incident, they are actually saying the residents committed the felony of a false report. I don’t want to give anyone any ideas, but if the police think such a felony was committed, then they have to interrogate the suspects long and hard, and only afterward come out with an announcement. So far, not a single Qusra resident has been interrogated for false complaints. By the way, the police know precisely who the suspects are and where they live: they signed official statements, after all. So what do we have here? A police force which falsely accuses people of committing a crime it hasn’t even begun to investigate.

Which, truth be told, should surprise no one. The fictitious closing of investigations that have never actually been opened is the specialty of the Samaria and Judea (SJ) District Police. According to our sources, the investigation was very quick. So quick it didn’t actually take place. The burning of the vehicles took place on Friday, some ten days ago; on the following Saturday, settlers and soldiers committed a pogrom in the village; and on the next Wednesday, the first of the SJ district’s finest showed up to investigate the arson. They ran into a group of angry residents, carried out a hasty withdrawal, and haven’t come back since. Which did not prevent the police from saying, about a day later, that the arson was fabricated.

So it turns out that when the cops really want to, they can close the files as quick as a wink. It’s just a pity that they forget we pay them not to close cases but to crack them – to find the truth as best they can. The reason for the police libel is also clear: the SJ district is under heavy pressure following its dysfunction on the issue of Qusra. Thus, it found the quick way out: it fabricated reality.

The Qusra residents are not alone in this. The police hastily charged social activists last summer, and had to somehow justify the arrest of all 89 of them. Some of the cases were dropped by the courts, some were dropped by the prosecution, and a judge said early yesterday morning (Hebrew) that she is not certain if there is any point in carrying out a process that will “make a mountain out of a molehill.” This remark came after the police pulled out its trademark stunt, providing the lawyers of the defense with the evidence minutes before the court went into session. At least one lawyer told Ynet that to top that, it seems the police has tampered with the evidence, as well.

This is the same police force which was regarded by an official inquiry board, the Orr Committee, as suffering from a “culture of lies” (Hebrew), and which was described by a former chief of Internal Affairs Division as having a “culture of cover-ups,” where cops routinely lie to the courts in order to defend each other (Hebrew). And that happened within the official borders of Israel, where the police still have some vestige of an ethos demanding they protect the citizens who pay their salaries.

Now ask yourself whether you can trust the police to tell the truth as far as it concerns the residents of a Palestinian village, which it regards – and with good reason – as enemy subjects; and secondly, whether, given the events described above, the position of the SJ District Police can be considered reliable.

Related:
A history of violence in Qusra: Not ‘clashes,’ but ‘pogroms’
PHOTO: Why is a Border policeman shaking hands with a masked settler?