For years now young Palestinian men have found themselves the targets of groups of Jewish youths roaming the streets of West Jerusalem on weekend nights. As warm weather returns, so are the attacks. One such attack raises the question: who are the police protecting? 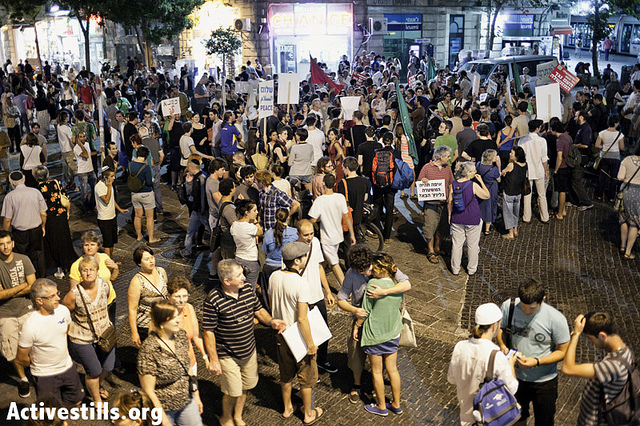 Jerusalemites protest against racism in Zion Square on August 18, 2012, two days after a Palestinian youth was seriously injured alongside two others in a mob attack by Israeli youth in crowded central Jerusalem. (photo: JC/Activestills.org)

Thursday night, Zion Square, West Jerusalem. Summer is officially here, and the area that was quite empty during the winter is bustling with thousands of people enjoying a night out. Among them are some Palestinians who have come to partake in “Israelization” — or, at least, that’s how some people have begun describing Palestinians who blend into “Israeli” parts of Jerusalem, adopting modes of behavior that we usually ascribe to ourselves.

At least one of the Palestinians seems — I don’t know, I didn’t see — to have taken his Israelization one step too far, by chatting up a Jewish girl. Maybe he made her laugh, maybe she almost gave him her phone number. Maybe, as is often the case with guys, he didn’t understand he was not wanted. I have no idea. What I do know is that Israelis don’t want this Israelization.

The Palestinian guy runs frantically past me, and a few seconds later, a bunch of Jews are chasing him. The attempted lynching of Jamal Julani immediately comes to mind, an assault that began with such a chase exactly here three years ago. I start running after them.

We sprint down Nahalat Shivaa (an alley of pubs and restaurants). The Jews pass through the stalls of Kikar Hahatulot (Cats’ Square) and pick up some more friends. The area is full of police and border police, but they seem to be oblivious to what’s going on. The gang runs past two female border police officers. No movement by the latter can be discerned. I stop and tell them: “Do you see this group of people? They are chasing a Palestinian guy, and when they catch him this is going to end very badly.” One of them says casually: “OK.”

From July to December, violent attacks on Palestinians in central Jerusalem took place almost every night. It took the police commanders months to start taking action and provide protection in the area. Only winter and the cold, as the number of people out on the town dwindled, did the violence begin to decline. Have the police forgotten that so quickly?

But I have no time for being shocked. I run up Hillel Street, and catch up with them near an IDF office. The Palestinian has managed to join a few friends, and just as I arrive, around 20 Jews are attacking five Palestinians. One Palestinians gets whacked in the head. One of the Jews pounces on the group of Palestinians and makes stabbing hand gestures. I have no time to understand whether he is holding a knife or not. Instinctively I start to shout, “Police, police,” and the Jews disperse instantly.

I walk up to the Palestinians. Two of them, completely terrified, shout to me: “What the hell did they want from us?” but in English. It turns out they are Canadian citizens visiting relatives in East Jerusalem. I tell them that’s the atmosphere here now, and that they should be careful. I really don’t want to tell them to get out of the area, but I know I have no better suggestion, and so I tell them in English, “It’s best if you leave quickly.” Down Hillel Street, more or less in front of the indifferent female border police officers, the Jewish assailants regroup around us. Someone tells me: “Call the police again and we will bust you up, too,” but most of them focus on cursing and threatening the Palestinians: “We will fuck you up.”

Now the Border Police officers cross the road and hear the threats by the Jews. “What’s going on here?” One of them wants to know. “He spoke to my sister,” one of the guys exclaims. “I will fuck him.” I conclude that now there can be no doubt as to who is the assailant here and who should be protected. But the Israeli Border Police seem to have standard procedures as to how public order should be reinstated, and the police officers seem to follow these strictly. They order the Palestinians to stand aside and then they demand to see their ID cards. They let the Israelis go on cursing and threatening. Two male border police officers arrive.

I walk up to one of the female border police officers. “Remember me? I saw the incident from its beginning. The Palestinians were attacked.” But she tells me I am obstructing a police officer in the line of her duty and instructs me to go back.

This went on for several minutes. the Palestinians humiliated on the corner, the Israeli citizens threatening violently and the officers “doing their duty.” And then it ended. The Palestinians crammed themselves into a cab and fled the scene. One of the Jews shouted, “come on, guys, let’s a have a good time,” and they dispersed without the Border Police officers saying a single word to them throughout the entire incident.

Aviv Tatarsky is a researcher for Ir Amim and a volunteer with an anti-racism group in Jerusalem. This article was first published in Hebrew on Local Call. Read it here.

Editor’s note: The Jerusalem Police did not respond to a request for comment.