The military trial of Elor Azaria is part of a purification ritual, one that takes place every 10 years, as if everything in between is just fine. 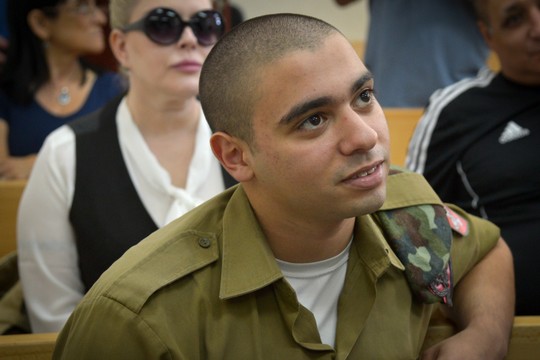 Sgt. Elor Azaria during his trial at the military court in Jaffa. (Flash90)

Israeli Defense Minister Avigdor Liberman was quoted last month as saying that, “we can’t reach a situation in which a soldier has to ask for a lawyer before he heads out on a mission.” His words resonated, as usual, portraying the Israeli political leadership as the defenders of soldiers against those who wish to do them harm — you know, all those jurists with no combat experience who persecute soldiers for no reason. In that sense Liberman the “radical” is no different than Tzipi Livni the “moderate,” who promised to provide soldiers with a “legal Iron Dome.” Actually, that’s the position of pretty much the entire political spectrum in Israel.

Such lies might be convenient, but they are not reality. Israeli soldiers are not deployed throughout the West Bank because it is their manifest destiny but rather as the result of an Israeli decision: over and over again, the Israeli public chooses a leadership — Liberman, Yair Lapid, Netanyahu and the rest — who give the army orders to maintain military rule over the Palestinians in the territories. The Israeli soldiers who are deployed there — rarely in combat roles, sometimes in policing roles, but mostly in order to control a civilian population with no rights — are implementing Israeli policy, and have been doing so for decades.

One needn’t be a lawyer or legal expert to understand the legal repercussions of Sgt. Azaria’s actions in Hebron that morning, where he was videotaped on March 24 shooting in the head, from close range, a Palestinian attacker lying injured on the road. But after nearly 50 years in which Israeli soldiers have been sent to rule over Palestinians, wouldn’t it be more fitting, more just, if the prosecutor’s gaze landed a little higher than the rank of sergeant to, say, those actually setting these policies? Who should really be looking for a lawyer: the defense minister or the sergeant?

The reality in which soldiers kill Palestinians with impunity is part of the occupation’s routine. Sgt. Azaria is not responsible for creating that reality, nor is the soldier who just last week killed Iyad Hamed from Silwad, nor are those who in the span of a week this July killed 10-year-old Muhyi a-Din a-Tabakhi and 22-year-old Anwar a-Salaimeh, or 15- year-old Mahmoud Badran who was on his way home from a West Bank water park. That’s how it was this summer, and with hundreds of other killings over the years. To be clear, every soldier and Border Police officer who has criminally killed a Palestinian over nearly five decades of military rule is responsible for his own actions. But who is responsible for creating that reality? Who made all of that normal? And isn’t the political echelon’s responsibility far greater?

There is something absurd, something outrageous and wrapped in a heavy layer of hypocrisy, when once a decade Israel puts one of its soldiers on trial for manslaughter. It’s as if everything is just fine in between these once-in-decade trials, as if the trial is some sort of essential purification ritual meant to wash off the filth of the occupation so that we can enter the next decade with a clear conscience.

Want to put a soldier on trial once every 10 years? Go ahead. Between each show trial, just make sure to remember who is actually responsible: those who sent the soldiers to rule over human beings and who contrived a reality in which 19-year-olds shoot 20-year-olds in the head with the knowledge that 99 percent of the time they won’t even be reprimanded. It is for this overall reality that individual soldiers in the field need not answer, but rather the Military Advocate General, chief of General Staff, and successive ministers of defense.

For that reason, statements we’ve seen from the likes of Liberman and Netanyahu are the epitome of hypocrisy. They want to protect the soldiers? Seriously? Instead they hide behind the soldiers’ and deny their own responsibility, all with the knowledge that there is zero chance they will ever have to face justice themselves.

I don’t know how Sgt. Azaria’s trial will end, but a show trial of a non-commissioned officer is a rather marginal episode in a reality of systemic state violence against a civilian population with no political representation, rights or protection. From behind a mask of lies they warn us that if Azaria isn’t convicted, the army will turn into a street gang. That’s an interesting semantic choice: if so, why aren’t the gang leaders sitting on the defendant’s bench alongside their sergeant?

Hagai El-Ad is the executive director of B’Tselem. This article was first published in Hebrew on Local Call. Read it here.