Sixty-five years after his family fled their beloved village, a Palestinian refugee gets to realize his dream and see what is left of his fantasy.

“It’s good to see you’ve come back home,” sings the radio ever since Arik Einstein passed away, “Home – it says it all.” “What does it mean?” asked Waffa, as we sat on the balcony of his sister’s house, standing white and stony on the highest hill of Beit ‘Anan in the West Bank. “Everything,” I replied.

Waffa and I have known each other for a decade. A tragedy brought us together, and we get together once a year and talk about everything – everything apart from the tragedy. This time we talked about this home, to which it is so good to come back to. We compared our clumsy return experiences, and our personal attempts at feeling the taste of a mythological ‘home’ which says it all. This is how it happened:

Waffa’s family reached the small village near Ramallah in 1948, leaving the hilly village of Bayt Shanna in a hurry in order to safely settle beyond what became known as the Green Line. Although Waffa was born in Beit ‘Anan, he heard about Bayt Shanna from his parents and grandparents, who compared each winter to the winter there, every tree to the trees of the village, and each dinner to the ones they would have before the expulsion. And so it happened that Waffa kept looking back into the past; his longing for the perfection of Bayt Shanna refused to dissipate. Waffa worked as a water engineer in the West Bank, and after receiving a permit to enter Israel in order to travel on the main roads and tend to the waterworks, he offered me to visit his family’s village together. I happily accepted. 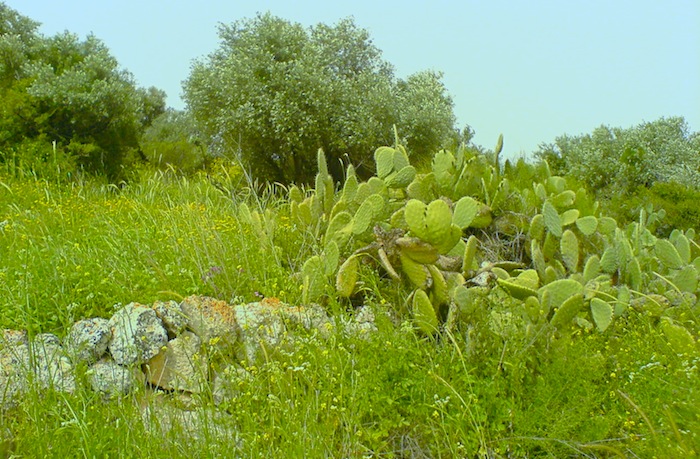 The remains of the Palestinian village Bayt Shanna, near Ramle. (photo: palestineremembered.com)

We set out on our way in the late morning. I was equipped with a giant map of the Israel National Trail, on which Bayt Shanna appeared as a tiny dot in a sea of lines. Waffa was equipped with a camera, comfortable shoes and great excitement. After 40 minutes of a tense drive, we arrived – or so we assumed – near that same dot on the map. As promised, in front of us stretched a sea of wild hills, tangled vegetation and twisting dusty trails, and us, puzzled, sat in front of it, waiting for the sudden awakening of an ancient memory. A grey van went past and we waved at it to stop. Behind the wheel sat a Bedouin man, 50 odd years old. He introduced himself as a laborer in the neighboring religious settlement, a ‘Shabbath goy’ [a gentile paid for performing tasks religious Jews refrain from doing on Saturday], responsible for herding the settlement’s cows. After 20 years in the place, he said with great confidence, he knows the lands of Bayt Shanna very well.

And so, following our guide, Waffa hopped among the stalks of grain and cactus fences, taking photos and pointing at remains of buildings, disappearing trails and giant trees, all of them keeping their silence about what happened. “Here was the mosque, here was the school, there was my parent’s house…”, he mumbled. With unfathomable confidence, he was walking in a village in which he had never been before, conducting a duel of knowledge with the Bedouin, who declared that even with his eyes closed he knows his way around this village.

And then there was the issue of the cistern. The third cistern. It was two hours since we started the tour and Waffa still hadn’t found it. The Bedouin man, of course, didn’t give up on trying to persuade him: “There are only two cisterns here! I know them well because I need to make sure the cows don’t fall in. Believe me habibi, there are no more cisterns…” Perspiring and stubborn, Waffa made his way through the shrubs and thorns towards the missing cistern. His mother and grandfather were instructing him in his head, whispering to turn left and right. We followed him obediently – longing for water. With all the excitement, we didn’t even bring a water bottle with us.

I cannot describe in words the expression on the Bedouin’s face when, eventually, we stood over the opening of the third cistern and peered in. A fig tree hid it with its roots, branches and wide leaves. Waffa, arms filled with the za’atar he picked on the way, smiled victoriously. “This is the happiest day of my life. I am happier than I was at my wedding!” he exclaimed.

On the way back, I told him about my own return. About my only trip to Russia, the country I left with my family at the age of three, before I became a person with memories. For years, I watched my grandmother wrapping herself in a thick blanket while the Russian meteorologist described the freezing temperatures in Moscow, while she herself sat in her warm room in Jerusalem. Her longing was strong and tangible. When I was 26, the Russian city, surrounded by forests full of delicious mushrooms, waited for me at the end of a 4.5 hours flight. For nearly a fortnight my mother and I walked around the city, exploring the lit streets and dining at the dinner tables of her friends (at the time they were eager students, now they are all grandmothers). I didn’t like the food, I was scared by the policemen on the streets, I detested the sharp smells wafting from the public toilets. The few mushrooms we found were full of worms. When the plane went up in the air and made its way back to Israel – I heaved a sigh of relief. I was going home.

The za’atar from Bayt Shanna was dried and crushed, and is now used to season dishes on holidays. I put my Russian experiences in a red album, which I haven’t looked at since. We are both back to live in the present, and each time the earth moves beneath our feet, we automatically look back. In our present home we talk about everything, almost everything, but the house doesn’t say it all and doesn’t know it all.