The distrust with which Palestinians treat the Israeli peace camp frequently appears as something of a surprise, and even affront, to international observers. But the difference between Israeli left and right is all too frequently one of degree, rather than kind. 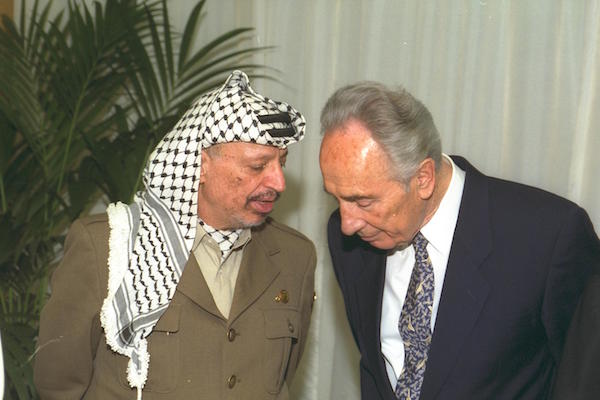 In this final respect, Peres could perhaps be said to be far more than a politician. After all, the cause of peace bestows a much more elevated status upon its adherents. Peres’s ostensible promotion to the cause of peace suggested that he had transcended beyond the grubby everyday immediacies which preoccupied lesser political contemporaries. The peace project, which has become inextricably interwoven with Peres’s own political career, provided him with a clear sense of purpose and a not inconsiderable level of international acclaim.

This acclaim largely reflected the fact that Peres couched his words and actions within an acceptable framework of reference which did not stray beyond the boundaries of political permissibility. Peres appealed as much to an international audience as to his domestic constituency. A considerable part of this appeal derived from the perception that Peres was a committed and determined practitioner of peace.

In common with other self-adulating “doves,” he became fluent in the vernacular of peace – his political persona became inextricably tied up with imperatives of “compromise,” “reconciliation,” and “co-existence.” Whereas these words would elicit responses of horror or terror from the likes of Netanyahu and Avigdor Liberman, Peres instead endeavored – with no little skill – to align them with Israeli state interests. 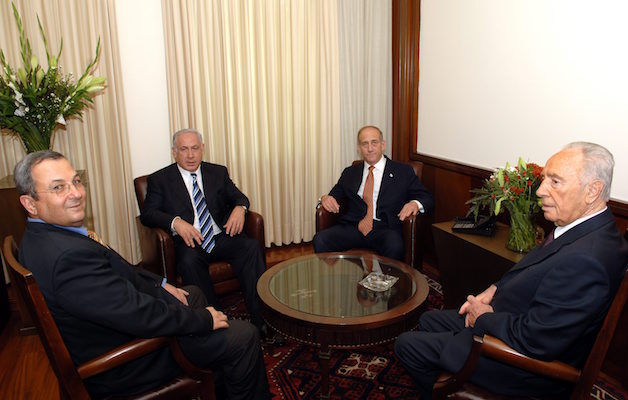 ‘The difference between Israeli left and right is all too frequently one of degree, rather than kind.’ Pictured: (left to right) Israeli prime ministers Ehud Barak, Benjamin Netanyahu, Ehud Olmert, and Shimon Peres, June 19, 2006. (Amos Ben Gershom/GPO)

The “success” which Peres and his fellow doves enjoyed in this regard goes some way towards explaining the Palestinian reluctance to engage with projects or initiatives predicated upon “compromise” or “co-existence.” The belief that the conditions and consequences of the occupation can be overcome through a range of semantic devices and illusionary hopes has since been exposed as the cruel fiction that it always was. It is no coincidence that the BDS (Boycott, Divestment and Sanctions) movement should now demand and assert Palestinian rights with such intensity.

I­t would perhaps be appropriate to speak of a Palestinian rejection of the style of politics with which Peres’s career was so tied – a style which speaks the language of universalism while promoting exclusivism; a style which holds out the hand of peace while simultaneously extending a clenched fist; a style which acknowledges Palestinian rights, but which does so in a way that is conditional, contingent and subject to the dictates of Israeli politicians.

These dualisms were formally enshrined within Peres’s crowning achievements — namely the Oslo peace process. At the time Peres was the Israeli foreign minister, and he played a hugely important role in the design and development of the Oslo, which could in many senses be described as the concrete embodiment of his personal political vision.

The subsequent unfolding of the peace process was frequently attributed to the implementation of the Accords. However, this fails to acknowledge an essential truth, namely that the seeds of dissolution were originally sown within the contradictions and tensions which corresponded to Peres’s vision of ‘peace’ – a ‘peace’ founded upon domination, control and division; a ‘peace’ which deceives and distorts; which lies and conceals. If this was the peace that was to be achieved, then perhaps it is better that it failed.

The ultimate legacy of the Oslo Accords is explicitly set out in a recent World Bank report,  which establishes how the arrangements put in place by Oslo have had a hugely detrimental impact upon Palestinian development. Aside from imposing a range of impediments upon Palestinian trade and movement, Israeli restrictions in Area C (areas of the West Bank under direct Israeli control) are estimated to cost the Palestinian economy around 35 percent of its annual Palestinian GDP.

The distrust with which Palestinians are predisposed to treat the Israeli peace camp frequently appears as something of a surprise, and even affront, to international observers. It is not difficult to see how the Palestinian failure to conform to others’ expectations could fuel the prejudice which says Palestinians have no interest in peace. Given the eminent reasonableness of the likes of Peres, how else could we possibly interpret this abrupt rejection? What basis could Palestinians possibly invoke in rejecting the entreaties of “enlightened” and “progressive” Israeli political opinion?

For those more closely acquainted with the equivocations and deceptions of Israeli “doves,” the answer is relatively straightforward. The difference between Israeli left and right is all too frequently one of degree, rather than kind. The Palestinian leadership learned this lesson the hard way, when Ehud Barak, prioritizing his own political survival, placed the blame for the collapse of the Camp David talks onto his Palestinian counterparts. Palestinians more generally arrived at an understanding of the misplaced faith which they had placed in an illusionary peace process. It slowly dawned that the likes of Shimon Peres are not a preferable alternative to violent demagogues such as Avigdor Liberman and Benjamin Netanyahu; quite the contrary – they are more dangerous precisely because they enclose the Israeli fist in a glove.

It is no accident that Shimon Peres is perceived quite differently by domestic and international audiences. This is after all a general phenomenon – the divide between domestic politics and international affairs has long provided politicians with an opening in which they can reinvent and redefine themselves. Freed from the inconvenient objections of Palestinians who had to live with the consequences of their actions, both Shimon Peres and Yitzhak Rabin were free to perversely reinvent themselves as the doves of peace, inheritors of a tradition which had once been the possession of the likes of Nelson Mandela.

In forthcoming days, I imagine that international reflection on Peres will invariably present us with the vision of a man whose vision of peace remained unfulfilled, whose efforts in pursuit of peace were undermined and frustrated by the limitations of his Israeli and Palestinian counterparts. I would be predisposed to suggest quite the opposite.

The grim reality which now confronts West Bank and Gazan Palestinians – a reality characterized by dispossession, occupation and social breakdown – were clearly foretold within the deceptions and deceits which Shimon Peres and other Israeli doves so artfully contrived and assiduously cultivated. That is his true legacy.