The enemy in Tel Aviv is a shapeless wail in the morning. It has no point of origin, it arises from the air, a warning without warning. A noise from a void.

The enemy is a tremble in coffee number one, a soft boom over bread and butter at the restaurant last night.  It is the grinning diners who twist toward me when I turn toward them: “Keeps things interesting,” they chuckle.

“How is the atmosphere in the South tonight?” asked the anchor on the news  to reporters in the South. “They’re used to it down here,” she gushes. “They’ve gathered all together, it’s almost like a happening of sorts. Would I go so far as to say the atmosphere is nice?  Yes! It’s nice,” she says.

The enemy is a fish tank in the shelter in my neighborhood park. Don’t be so cynical! That’s terrible. It probably means a lot to frightened children. Who wouldn’t be calmed by goldfish swimming circles in cool waters in the summer?

I know about being calmed by watching fish. My first teenage love and I sat at night in the dark, watching water that bubbled and glowed and fish moving silently in the tank in his tiny room, on a kibbutz in the South, 14 kilometers from Gaza. And I never felt so safe.

Late one night we left the kibbutz to pick up someone from a bus station somewhere. He put a pistol on his belt.

“Do you really need that?” I said.

It was 1990 and I had stared at the faces of angry people on the subways for years. Here there is no face.

But we know what the enemy looks like: A pistol in his pocket, a siren in the morning. The only people we remember are the frozen photos of boys with bombs, dead already when their photos were found.

What enemy do they see from Gaza? 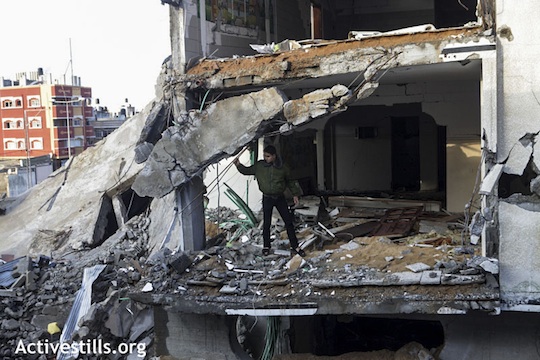 Ruins of a Palestinian home in the Az-Zaitoun neighborhood of Gaza city, destroyed during an Israeli airstrike, November 23, 2012. (Photo by: Anne Paq/Activestills.org)