That one must be a pro-Israeli Zionist in order to be eligible for the State Department’s Israel-Palestine team is indicative of the problem with U.S. policy in the region. You’ll never see an analyst from a PLO-affiliated advocacy organization or Palestinian think-tank become a senior member of the U.S. Mideast peace team. 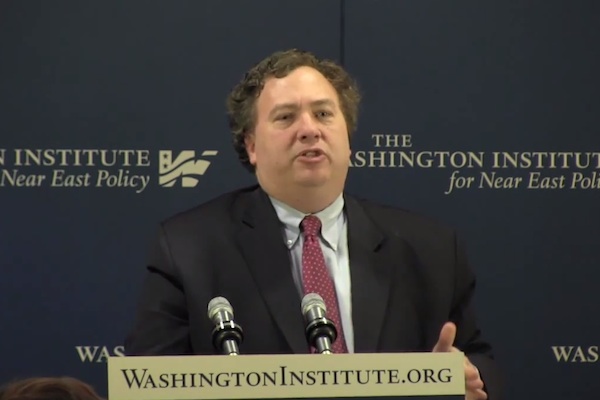 Middle East analyst David Makovsky joined U.S. envoy Martyn Indyk’s peace team this week, Laura Rozen reported Monday. Makovsky, A Zionist Jew, former editor of the right-leaning Jerusalem Post, was until now a fellow at the Washington Institute for Near East Policy. AIPAC and Indyk – then a researcher for the Israeli lobbying organization – were the driving force behind the institute, though AIPAC is no longer affiliated with the Institute.

Makovsky is considered a two-state hawk and is very close to Denis Ross, another former envoy to Israel/Palestine (the two co-authored a book on the issue). In an op-ed for the New York Times a few months ago, Makovsky called on the EU to “get tough” with the Palestinians and force them into talks with Israel. The piece also stated that Europe should publically reject any Palestinian return to the State of Israel. This position places Makovsky at the center-right of the Israeli political spectrum, since both the Geneva Accord and former Prime Minister Ehud Olmert’s Annapolis offer suggested a limited, agreed-upon Palestinian return.

Read a response to this article: ‘I am pro-Israel too’

Makovsky’s signature work in the last couple of years is a set of two-state maps that would allow Israel to annex most West Bank settlements, along with “fingers” leading to them at the heart of the Palestinian state, in exchange for desert land that would be handed to the Palestinians at a 1:1 ratio. In defining the land Palestinians would hand Israel, these maps also exceed anything that was negotiated in the (non-binding) Geneva talks. The maps don’t include any reference to Jerusalem’s status, probably because the current Israeli government rejects territorial compromise in the city.

You can see Makovsky’s maps on the Washington Institute’s site, side-by-side with the Geneva map and – incredibly – a map based on Lieberman’s idea of handing the Palestinians areas currently populated by Arabs citizens of Israel, along with their (undesired) residents.

It is very likely that those maps are what got Makovsky into Indyk’s team. Israeli media recently reported that the American negotiators are perparing to present their own two-state maps. Assuming that Makovsky and Indyk are not seriously considering the Lieberman map, it’s possible that the American offer will be based on Makovsky’s work at the Washington Institute, which is a non-starter for any credible Palestinian leader.

It is telling of the problem with U.S. policy in the region that one must be a pro-Israeli Zionist in order to be considered eligible for the State Department’s Israel-Palestine team. Indyk’s team includes a variety of personalities representing political views ranging from the Israeli Center-Left to the Israeli Center-Right. You’ll never see an analyst from a PLO-affiliated advocacy organization or Palestinian think-tank become a senior member of the U.S. Mideast peace team; even the idea sounds absurd.

But even within the narrow framework in which Washington’s Israel-Palestine policy is constructed, the Ross-Makovsky approach never worked. It is based only on constantly re-drawing maps in order to satiate Israel’s growing appetite for land, all while applying enormous pressure on the Palestinian Authority to play along. The possibility, even as a completely hypothetical exercise, that Israel prefers maintaining the status quo over ending the occupation is not part of the Ross-Makovsky playbook, so any confrontation with the Israeli government – no matter how rejectionist or right wing it might be – is also out of the question. Under those circumstances, a breakthrough is highly unlikely (and expect the Palestinians to be blamed; that’s also part of the playbook).

Related:
Is the Obama administration cooking up ‘Oslo 3’?
How 24,000 new settlement homes allowed Netanyahu to save face
U.S., Israel break not only on Iran, but on Palestine, too