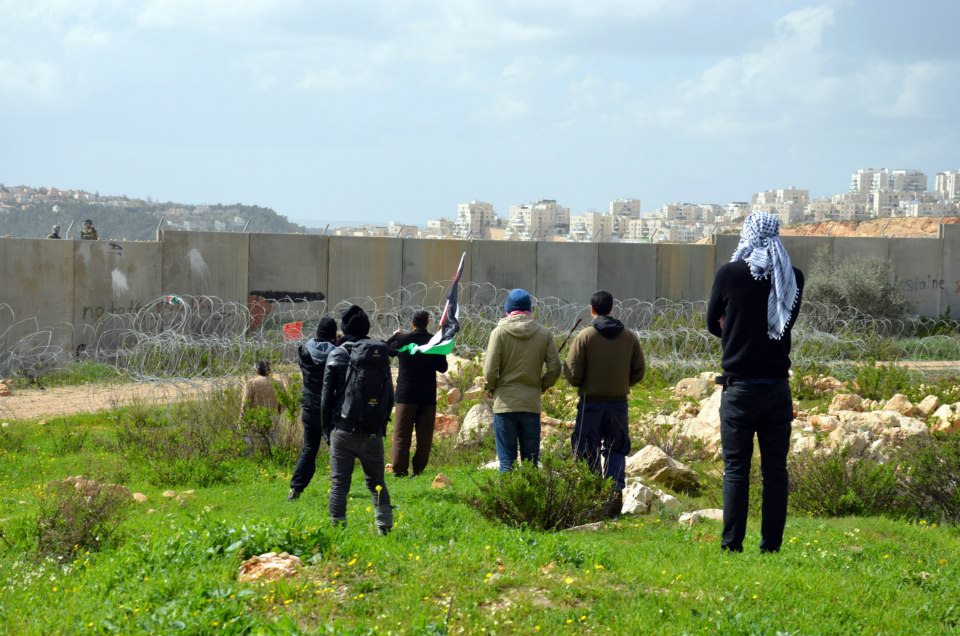 Last week I went to the Friday demonstration in the West Bank village of Bil’in for the first time.

Some of the people who know me found it hard to believe. “Only now? Next week they will be marking eight years of demos, and only now you come, Ami?”

Yeah. I guess I’m what you call a “couch-leftist.” My battle is done in my home, my sword is my keyboard. I’m proud of that sword, I must say. But for the past year I’ve been feeling it isn’t enough.

I live a privileged life in a suburb of Tel Aviv. Although certainly no comparison to the occupation of Palestine, I live under a “corporate-capitalist occupation” of sorts. Work and family and all the usual stress of living in Israel take its toll, and those four hours every Friday, with my two girls in kindergarten and me and the missus alone, seem like a small window where we can come up and gasp for air.

Go to Bil’in instead of brunch in Tel Aviv? Nuh-uh.

I used to be a much more vibrant demonstrator in my “youth.” I guess I’m losing a bit of that with age, and with the responsibilities that come. My latest “burst” was during the social protests of 2011. As opposed to the occupation, the fight against corporate capitalism brought me to the streets. Sure, they were just a mile away. Not twenty, God forbid.

But for the past few months, I’ve been thinking about Bil’in a lot. I knew I was about to go, but just couldn’t get my act together. And then Emad Burnat and Guy Davidi’s Five Broken Cameras came out, and of course Dror Moreh’s The Gatekeepers, both up for oscars in just a few days.

And it felt like something was coming together. Like it was now or never. So last Thursday I dropped a line to Haggai Matar and told him I want to go to Bil’in, and sure enough he sorted me out. “And bring a scarf,” he reminded me in our email correspondence.

The next morning I sat in the back of a car next to a French activist who was visiting her grandmother in Israel, and an Israeli who just returned from a few years in England. He was shot in the knee by Israeli forces during a demo in the West Bank, and this was his first demo after his return to the region.

Up in front were two young activists, veterans of the protests who gave us some tips on what to say if we get questioned at the checkpoint.

When we got to Modi’in, we took a left and it was a short drive to the village, through the lush green hills of the West Bank, green from the rather wet winter we were having.

In Bil’in we entered a house where we were given instructions about how to act during the demo, what weapons we should be aware of and such. It was a very smooth briefing, almost too professional. 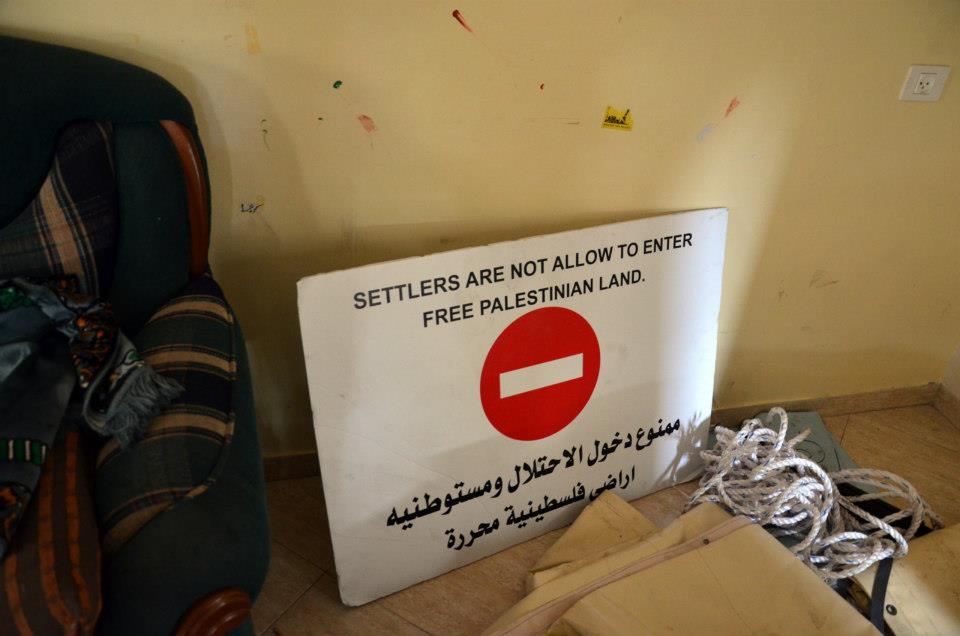 Outside, there were children trying to sell us trinkets. There seemed to be a bit of “protest tourism” going on in Bil’in. Both the briefing and the tourism bothered me. Not because I care that the locals are making money off of it. God knows, I support anything that would alleviate their suffering.

No, what bothered me was that for a briefing to be so smooth, and for protest tourism to develop, you need time. An occupation that goes on, and on, and on.

We had some good coffee and chatted before the demo began in a local cafe. 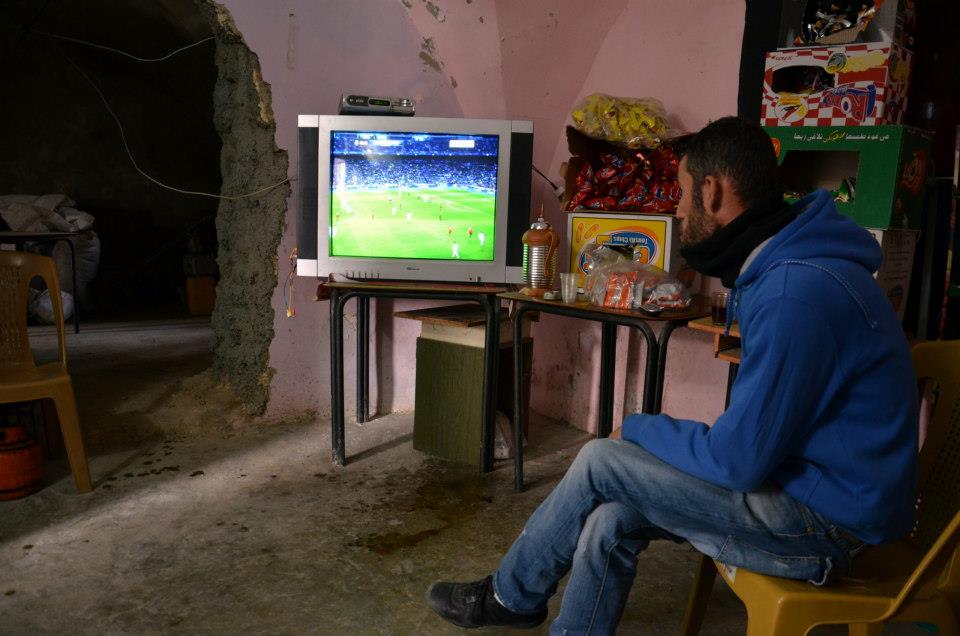 After the briefing, Haggai showed me the backyard of a house. These are tear gas canisters collected by the locals, and sometimes used as “decorations” in various events. 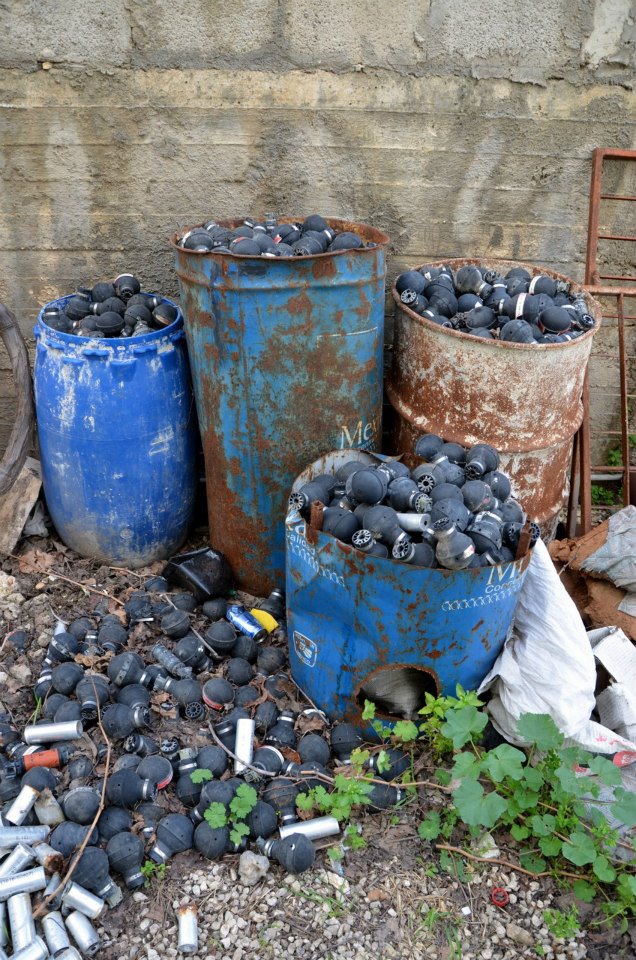 After the locals left the Friday prayers at the mosque, it was time to demonstrate. Before jumping into the nearest car, I shook hands with Burnat. I tried to find the words to say what I thought of his movie, but typical of me, just shut up. I do that in front of people I admire sometimes. Weird that way.

We parked a few hundred meters from the separation wall and started walking. 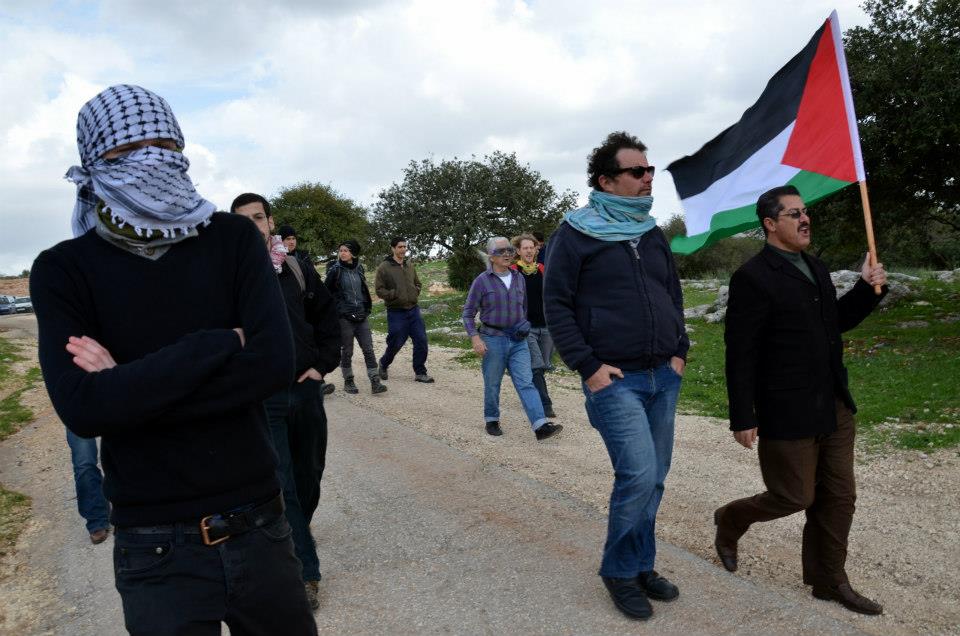 As we approached the wall, I saw that on the new and unfinished buildings of Modi’in Ilit, the largest settlement bloc in the West Bank, groups of Haredim were gathering on the rooftops to get a good view of the violence. 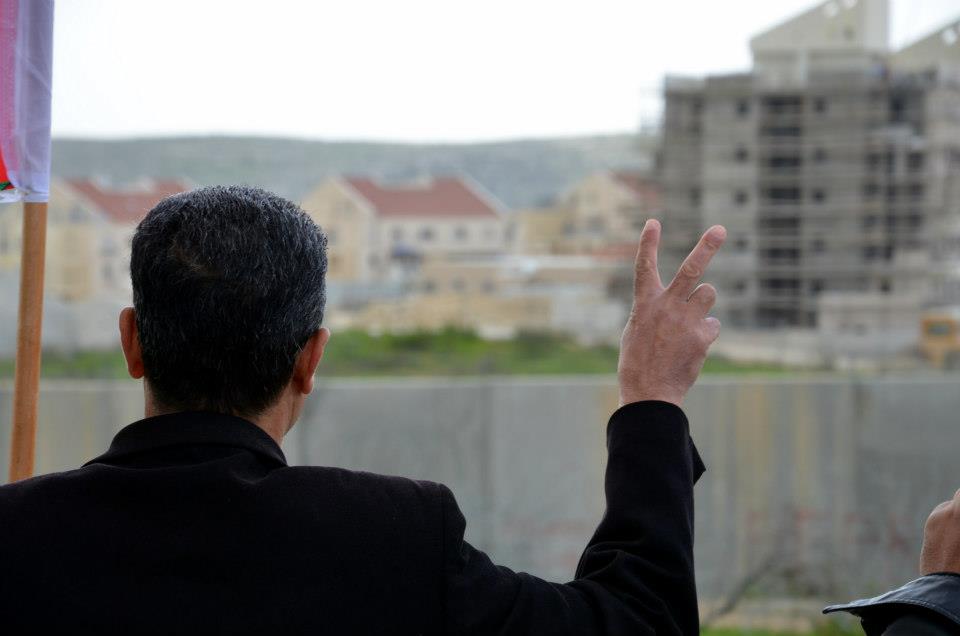 I also saw two soldiers perched up on the wall, apparently to show the “Skunk truck” below them where to spray the “water.” 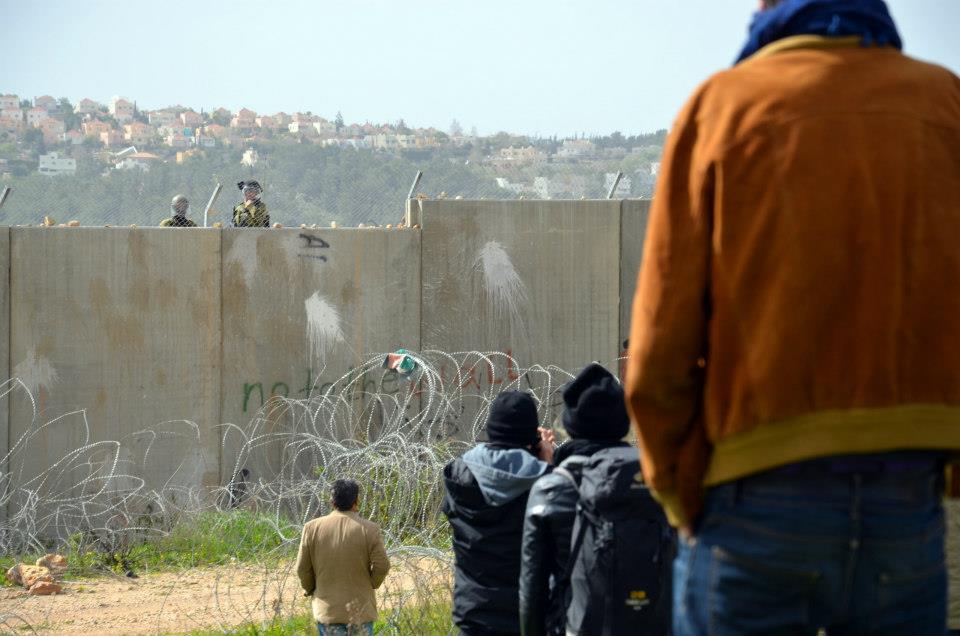 It is the most foul stench I’ve ever encountered, and you don’t see it coming sometimes (below). 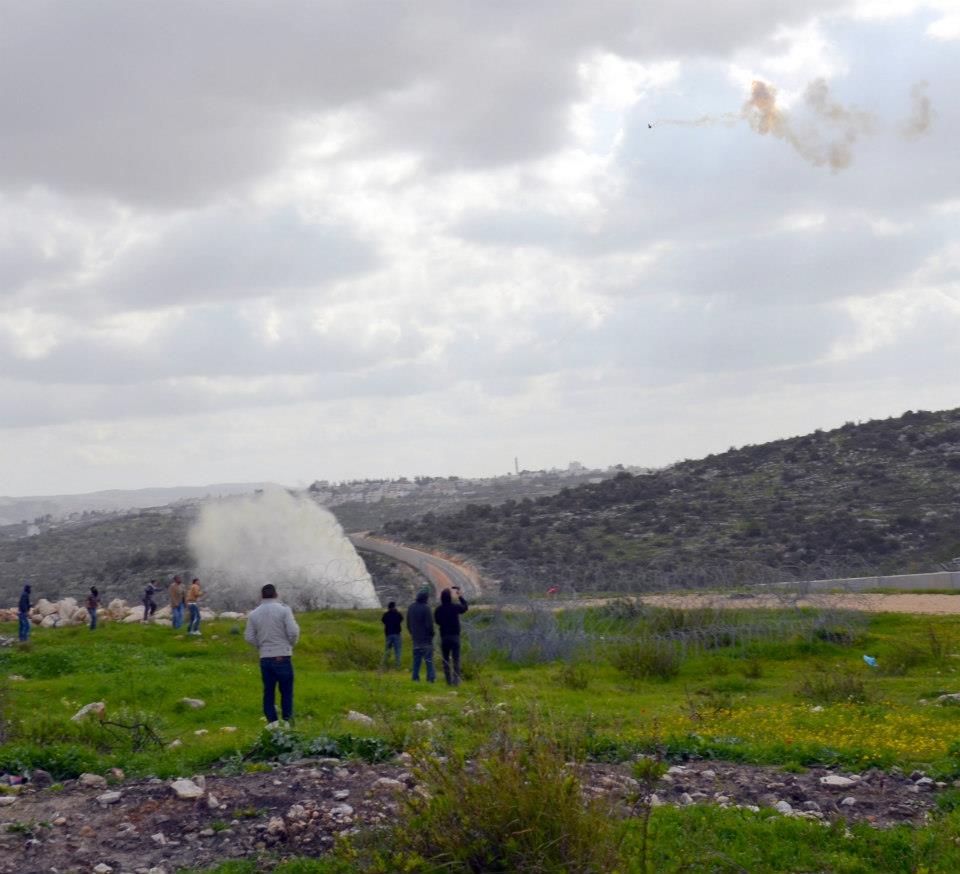 On the hill to the right, the officers who “managed” the demo had an overview of the site. 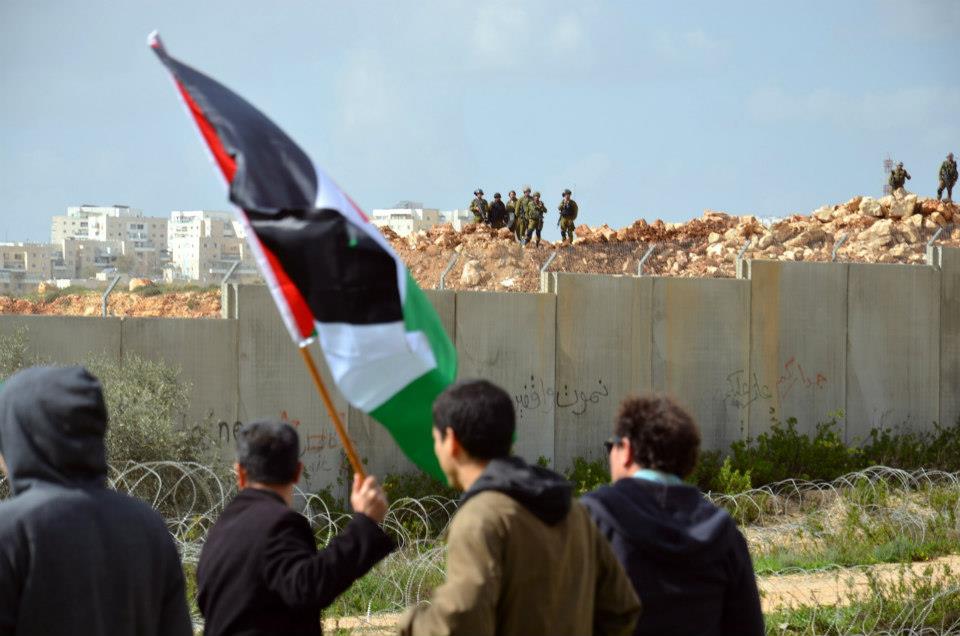 It was an odd feeling for me, to see the soldiers in green uniform, the same uniform that I have worn in the past, aiming tear gas and skunk water at me. I felt like I knew them and wanted to talk to them. But I felt angry at them, too. At the situation.

Haggai gave me some pads with alcohol to sniff in case the gas got to me. We were only two dozen people there, since most of the youngsters were demonstrating that day in front of the Ofer prison in solidarity with Palestinian prisoners on hunger strike. Yet one veteran activist told me he was surprised by the amounts of gas the army was using that day on so few protesters here in Bil’in.

During the briefing, they told us that if we get a whiff of gas – we’re going to panic, but try and stay calm and it will be over in a few minutes. ‘Don’t run, because you might break a leg on the boulders. Just stop and stay cool.” 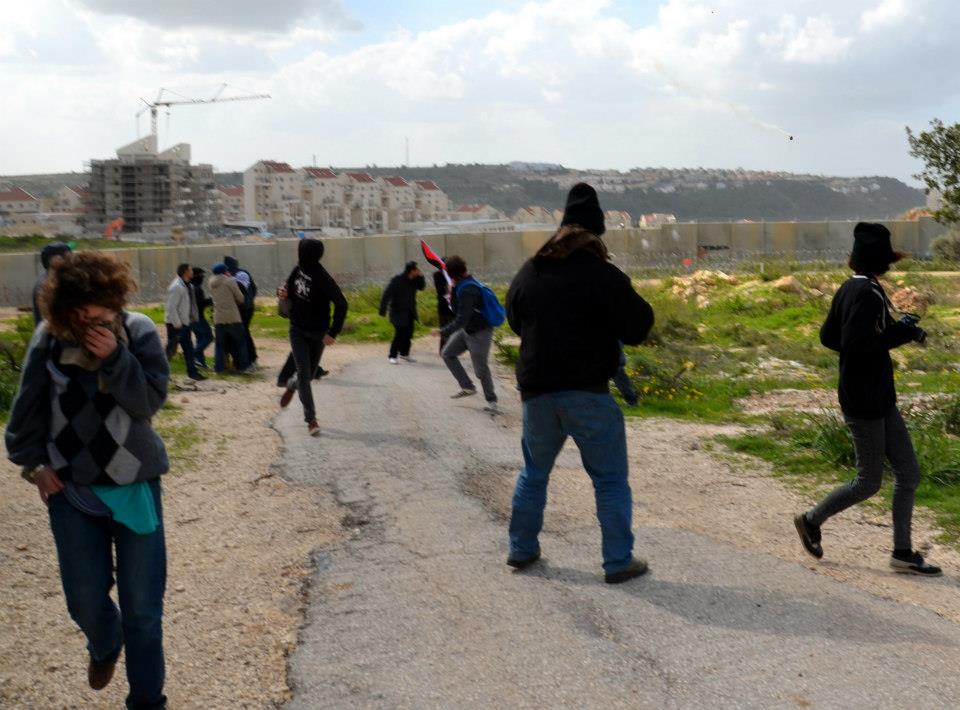 The first two whiffs I got were bearable. I slowly walked away from the cloud and waited for me to get my breath again. But the next two whiffs were rough. I started to cough like hell, spit, couldn’t breath, felt like my throat was on fire, couldn’t open my eyes, started to panic – and yes, started to run fast like an idiot back up the road to where the cars were. The only time before that I experienced gas was in my basic training during army service. And I don’t remember it being so painful.

As I ran back up, I was holding my camera in front of me and managed to see out of the corner of my eye Emad Burnat, with his camera of course. Probably the sixth one…

He was just standing there, with his sweater over his nose, looking so calm, that I just pressed the shutter button without even looking through the viewfinder. His whole composure was of “been there done that,” and I must have looked like a right fool. Hope I don’t appear in his next film. 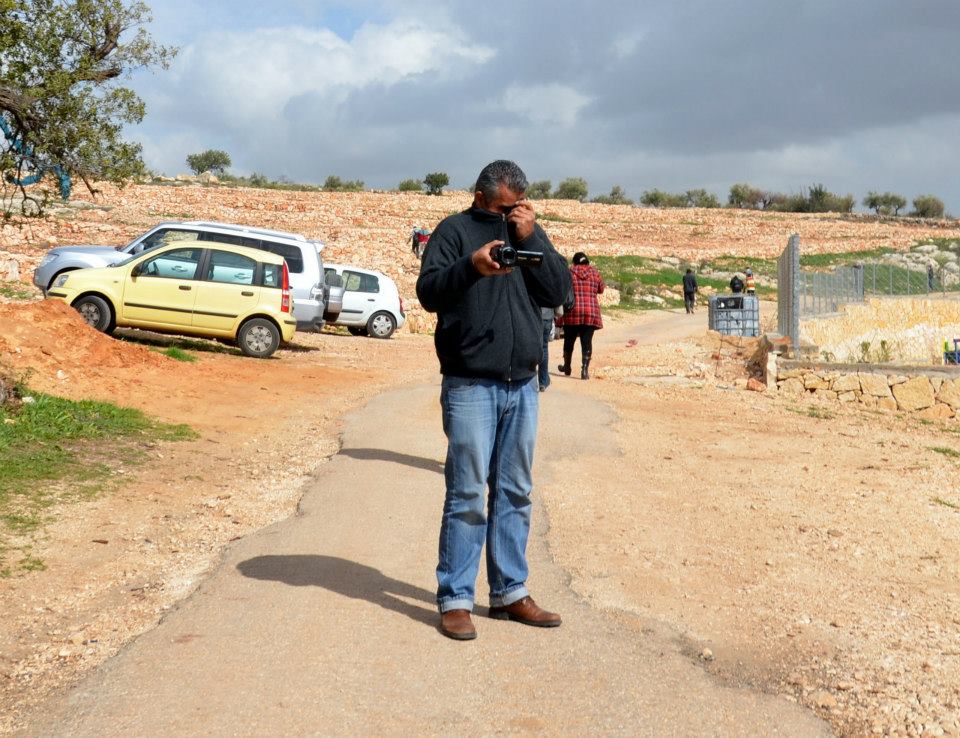 The demo was over fairly quickly, as the amount of people was so small. We got back into the car, my eyes still flaming. We stopped at Wajee’s house, who gave us dark sweet tea. It took me back to Sinai, which I miss dearly. 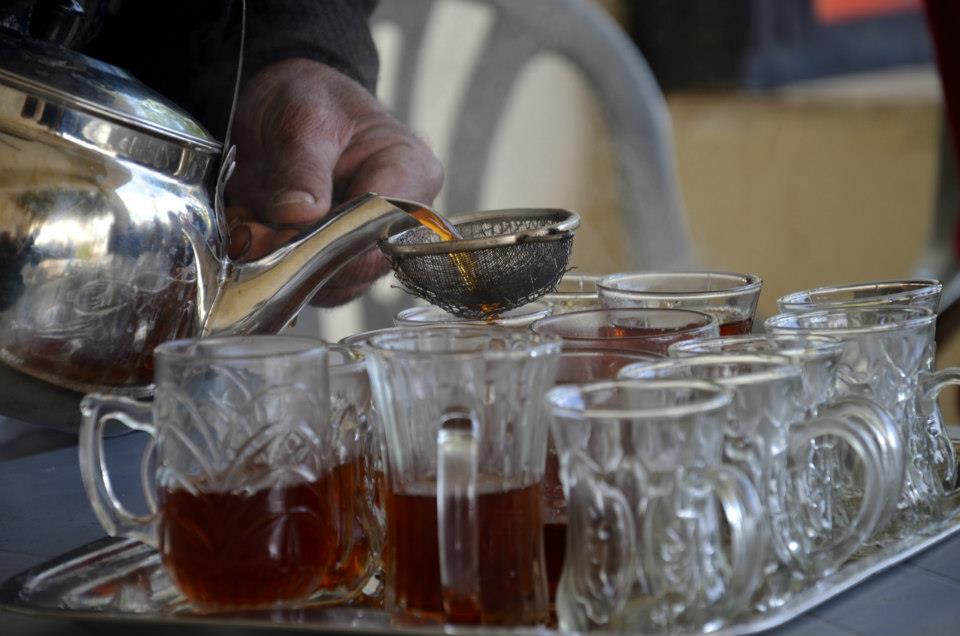 Wajee then asked if anyone wanted seconds. I raised my hand, and he smiled at me and said “I’m not asking you. I can already see on your face you like it.” I had thirds, too. He then put some plates on the table – the most delicious olives, olive oil (I bought a bottle), za’atar, eggplant salad, endive salad and a warm salad of hubeiza (mallow) leaves. 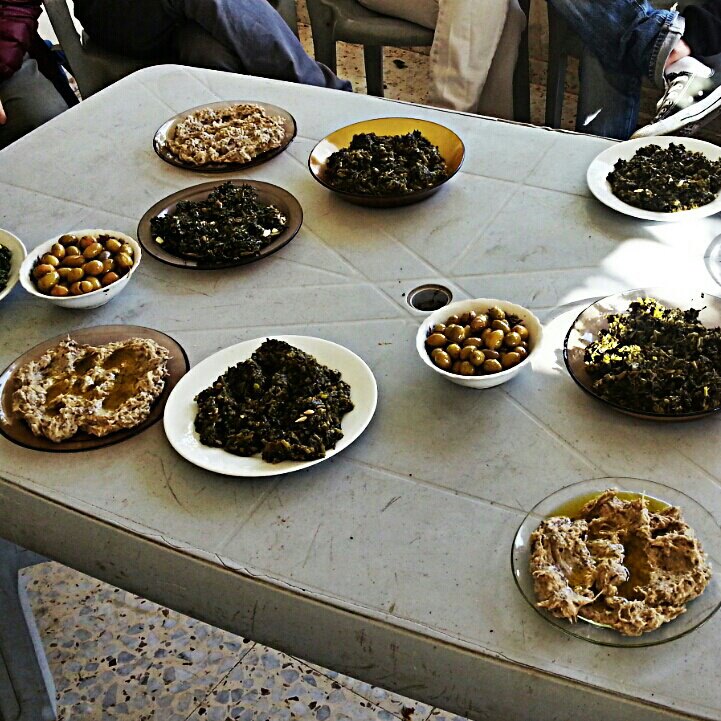 On the way back home, I fell asleep in the car. I was exhausted. Not really from the physical events. I think more of mentally what I had to take in, digest.

God willing, it won’t be my last time in Bil’in. And if my Palestinian brethren will continue to have me, I promise to stand more by their side. Not only behind my computer screen.