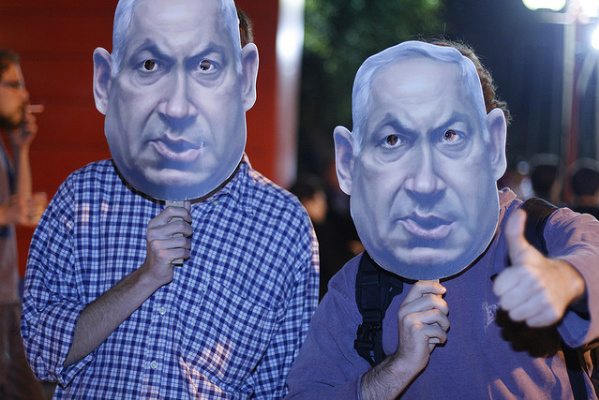 Which Bibi should we believe? The one who talks peace, or the one who builds in the West Bank? (Photo: Flickr / Yarden Sachs)
Two questions need to be answered following Prime Minister Benjamin Netanyahu’s reported rejection of a White House incentive package offered in exchange for extending the settlement construction freeze for two more months.

The first: Where does Netanyahu get the audacity to turn down a package like that, and in exchange for merely freezing construction for just two more months?

Let’s take a look at the shopping list, as reported in Haaretz:

The details of the letter were revealed by researcher David Makovsky on the website of the Washington Institute for Near East Policy. According to the report, the letter included incentives crucial to Israel’s security that Netanyahu has been demanding for years.

* For example, the United States pledged to support Israel’s position on stationing Israeli troops in the Jordan valley after the establishment of a Palestinian state, in order to prevent weapons smuggling.

* The United States also would not ask Israel to further extend the building moratorium and would pledge that the issue of settlements would be dealt with only as part of final-status talks with the Palestinians, the letter reportedly said.

* The United States also reportedly would veto any UN Security Council resolutions on the Israeli-Palestinian conflict this year, would upgrade Israel’s defense capabilities after the peace agreement, and would increase security assistance. This reportedly would include providing Israel with advanced fighter jets and early warning systems, including satellites. The U.S. also would start talks with Arab countries toward a regional agreement vis-a-vis Iran.

That’s an amazing list. In fact, those who say Netanyahu isn’t interested in these talks really have some good ammo with this one. How could he turn it down? Surely he could find a way to sell it to the right-wingers in his coalition. For just two months!
But the second, more interesting question is for the White House: Why only two months? Why give such a huge package at such a low price? Two months? That’s all you’re asking for? As if after two months the construction won’t matter any more? Is there something you’re not telling us, something you know that will happen in two months? Some kind of major breakthrough?

Please don’t tell me this has to do with the midterms. Because that would just be pathetic.